The Effects of Sacubitril/Valsartan on Clinical, Biochemical and Echocardiographic Parameters in Patients with Heart Failure with Reduced Ejection Fraction: The “Hemodynamic Recovery”

Liking renin-angiotensin-aldosterone system (RAAS) blockade with natriuretic peptide system enhancement may bear specific therapeutic benefits to patients with heart failure and reduced ejection fraction (HFrEF). The first-in-class angiotensin receptor neprilysin inhibitor (ARNI) sacubitril/valsartan combines the angiotensin II type-1 receptor blocker (ARB) valsartan with the neprilysin inhibitor sacubitril. Sacubitril/valsartan was superior to enalapril in decreasing risks of death and new admission for HF in patients with HFrEF in the Prospective Comparison of ARNI with ACEI to Determine Impact on Global Mortality and Morbidity in Heart Failure (PARADIGM-HF) study [1]. However, the effect of sacubitril/valsartan on cardiac performance in patients with HFrEF remains limited [2,3]. Therefore, in this study, we attempted to assess the effects of sacubitril/valsartan on clinical, biochemical and echocardiographic, parameters in HFrEF patients.

Study Design and Patient Selection: The study was conducted in our outpatient HF clinic center, which is mainly focused on HFrEF patients evaluated for heart transplantation, between 1st September, 2017 and 15th January, 2019, and was approved by the Institutional Research Review Board of the Istituto Mediterraneo per i Trapianti e Terapie ad Alta Specializzazione (ISMETT) center in Palermo, Italy. In this prospective observational single center study, sacubitril/valsartan was administered to patients with HFrEF, in addition to recommended therapy [2]. The aim of the study was to evaluate the effects of sacubitril/valsartan on clinical, biochemical and echocardiographic parameters, recorded at baseline and after follow-up.
Patients were included in the study in accordance with the following inclusion criteria:

Exclusion criteria were as follows:

All patients provided informed consent for participation, and the protocol was approved by the research ethics committee in accordance with the principles of the Declaration of Helsinki and national regulations.
Study Procedures: To assess clinical stability, patients were assessed in our outpatient clinic at the enrolment phase (baseline visit). Medical history, physical exam, weight, blood pressure, NYHA class, 12 lead electrocardiogram (ECG), and laboratory analysis comprehensive of biomarkers including N-terminal pro-brain natriuretic peptide (NT-proBNP) were obtained every 1 month to undertake sacubitril/valsartan dose up-titration and then every 6 months. Doses of sacubitril/valsartan were prescribed according to established recommendations [4]. The recommended starting dose was 49/51 mg twice daily. Patients were switched from an ACE-I after a 36 hour washout period. For patients with severe renal impairment (estimated glomerular filtration rate [eGFR] <30 mL/min), moderate liver insufficiency (Child–Pugh B), hypotensive (<110 mmHg), or taking low doses of ACE-I or ARB, the starting dose was 24/26 mg twice-daily. Up-titration was operated every 4 weeks if tolerated by the patient. Furosemide dose modifications were conceded during follow-up. Safety and tolerability assessments were performed, including monitoring and recording of all adverse events and their relationship to the study drug. Two hundred thirty were initially enrolled. After the run-in phase (one month), eight patients discontinued sacubitril/valsartan because of hypotension, four because of worsening renal function and two because of skin erythema: Two hundred and sixteen patients were finally evaluated.
Echocardiography: A standard 2-dimensional and Doppler transthoracic echocardiogram was performed at two time points (baseline assessment and 6 months after the initiation of sacubitril/valsartan) in all patients. All ultrasound examinations were done with a commercially available echocardiographic instrument (Vivid 9 System, Vingmed, General Electric Healthcare and Philips Medical Systems, EPIC, Cary, NC, USA). LVEF and volumes were measured from apical views using the modified biplane Simpson method, as previously described [5]. Volumes and mass were indexed to the body surface area. The right ventricular (RV) longitudinal systolic function was assessed by tricuspid annular plane systolic excursion (TAPSE). Color Doppler was used to qualitatively assess mitral regurgitation (MR) degree. Assessment of diastolic function was made by trans-mitral early (E wave velocity) and late (A wave velocity) Doppler flow waves, E/A ratio, and E deceleration time, and by measuring the early diastolic pulsed wave tissue Doppler (PW-TDI) at the medial and lateral mitral annulus (e’). E/e’ ratio was used as a parameter of LV end-diastolic filling pressure (LVEDP) [6]. Tricuspid regurgitation (TR) velocity was measured in order to estimate systolic pulmonary arterial pressure and inferior vena cava diameter variation as a surrogate for central venous pressure. Images were analyzed offline by two expert investigators blinded to clinical factors as well as drug treatment.
Statistical analysis was executed using SPSS Statistics 25 software (IBM). Continuous variables are defined by mean (SD), or by median and interquartile range, in case of non-normal distribution. Categorical variables were described as number (percentages). Two hundred and five patients were followed-up in our outpatient clinic, and changes from baseline were tested by paired t-test or McNemar test, respectively. A p-value <0.05 was considered statistically significant.

A total of 216 patients were prospectively enrolled. However, five patients discontinued sacubitril/valsartan because they experienced hypotension, four patients because of acute on chronic HF and two patients had ventricular arrhythmia. Therefore, 205 (89%) patients were included in the final analysis with a median follow-up of 10.49 m (range 2.93–18.44) months. The mean age was 59 ± 10 years, which is younger than general HFrEF population, but consistent with patients usually referred to a transplantation center, 15% females, 46% with ischemic heart disease, 62% with NYHA functional class II and 17% on atrial fibrillation. Baseline characteristics of patients are presented in Table 1.
The mean (SD) of systolic blood pressure was 118.5 ± 15 mm Hg. The median of NT-proBNP levels, eGFR (Modification of Diet in Renal Disease [MDRD] Study) equation dosages, creatinine concentrations and serum potassium at baseline were 1865 ± 2318 pg/mL, 69.4 ± 23.1 mL/min/1.73 m2, 1.2 ± 0.35 mg/dL, 4.14 ± 0.44 mEq/L respectively. Beta-blockers, mineralocorticoid receptor antagonist, and furosemide were administered in 96%, 85%, and 88% of patients, respectively. The mean daily furosemide dose was 131.3 ± 154.5 mg. Eighty percent of patient underwent to cardiac defibrillator (ICD) implantation and 25% of patients received CRT device with ICD. The starting dose of sacubitril/valsartan was 24/26 mg twice daily in 77% of patients. The dose of 49/51 mg was administered in 23% of patients. Mean baseline values of LVEF, E/A ratio, left atrial volume index (LAVi), were 27 ± 5.9%, 1.67 ± 1.21 and 54.2 ± 22.6 mL respectively. The percentage of patients with moderate to severe functional MR was 30.1% and the mean baseline values of TR velocity was 2.8 ± 0.55 m/s (Table 2).

During follow-up, five (2%) patients discontinued sacubitril/valsartan because they experienced hypotension and four (2%) patients because of acute on chronic HF. In two (1%) patients, worsening renal function was observed.

In summary, our findings are strongly suggestive of “hemodynamic recovery” in which a modulation of neurohormonal activation determined by sacubitril/valsartan may lead to a hemodynamic effect that may impact cardiac hemodynamic and in association with Nt-proBNP concentration abatement could lead to a ameliorate NYHA class and reduce diuretics administration and consequently to preserve renal function. 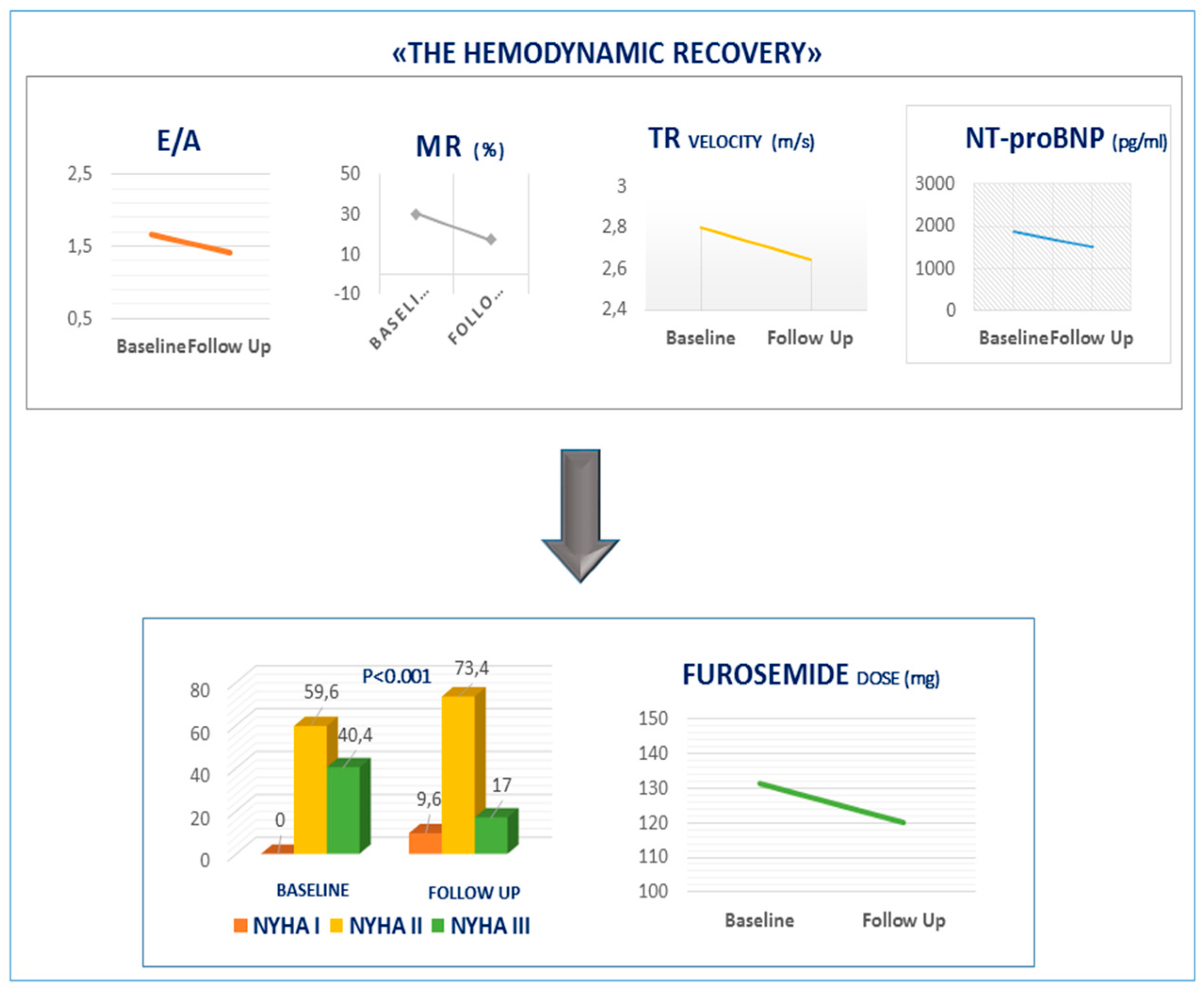