The Association between Bisphenol A, Steroid Hormones, and Selected MicroRNAs Levels in Seminal Plasma of Men with Infertility

In the growing ovarian follicle, the maturing oocyte is accompanied by cumulus (CCs) and granulosa (GCs) cells. Currently, there remain many unanswered questions about the epithelial origin of these cells. Global and targeted gene transcript levels were assessed on 1, 7, 15, 30 days of culture for CCs and GCs. Detailed analysis of the genes belonging to epithelial cell-associated ontological groups allowed us to assess a total of 168 genes expressed in CCs (97 genes) and GCs (71 genes) during long-term in vitro culture. Expression changes of the analyzed genes allowed the identification of the group of genes: TGFBR3, PTGS2, PRKX, AHI1, and IL11, whose expression decreased the most and the group of ANXA3, DKK1, CCND1, STC1, CAV1, and SFRP4 genes, whose expression significantly increased. These genes’ expression indicates CCs and GCs epithelialization processes and their epithelial origin. Expression change analysis of genes involved in epithelization processes in GCs and CCs during their in vitro culture made it possible to describe the most significantly altered of the 11 genes. Detailed analysis of gene expression in these two cell populations at different time intervals confirms their ovarian surface epithelial origin. Furthermore, some gene expression profiles appear to have tumorigenic properties, suggesting that granulosa cells may play a role in cancerogenesis. View Full-Text
Keywords: cumulus cells; granulosa cells; human; gene expression; microarray; epithelialization cumulus cells; granulosa cells; human; gene expression; microarray; epithelialization
►▼ Show Figures 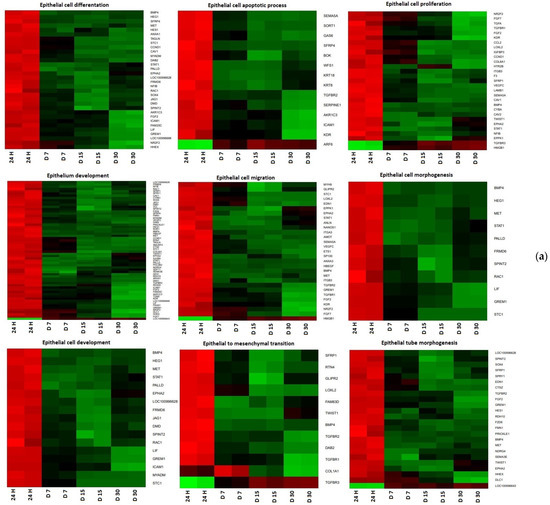