Copper Sources for Sod1 Activation
Next Article in Special Issue

Polycystic ovarian syndrome (PCOS) is the most common female endocrine disorder that affects women at active reproductive age. The prevalence of PCOS was estimated at about 12.6% [1] in Malaysia and at 5–16% for women of different ethnicities worldwide [2]. The Rotterdam Consensus Criteria for diagnosis of PCOS depends upon the presence of at least two of the following symptoms: oligo-/or anovulation (ovulatory dysfunction), features of hyperandrogenism, and polycystic ovaries [3]. Hyperandrogenism, or surplus of circulating androgens, is one of the most important characteristics of polycystic ovary syndrome (PCOS) which results in disturbance of ovarian function and female fertility. The excess androgen levels can modify gonadotropin-induced progesterone and estrogen synthesis in the follicles [4], consequently leading to physical and physiological disturbance such as hirsutism, menstrual abnormality, infertility, and glucose intolerance. Studies also have reported that oxidative stress (OS) is closely linked to pathological features of PCOS, and individuals with PCOS have imbalance in antioxidant status [5]. Conventional hormonal replacement therapy for PCOS patients seems to produce undesirable side effects such as breast tenderness, vaginal spotting, and hypertension [6]. Therefore, it is crucial to provide and explore new alternative therapies to retard hyperandrogenism with minimal side effects.
RJ (royal jelly) or bee’s milk is produced by the hypopharyngeal glands of the worker honeybees and is composed of a yellowish-white acidic secretion with a slightly pungent odor and taste [7]. It is considered a vital product among honeybee production with high biological and nutritional properties. Generally, it consists of water (60–70%), proteins (9–18%), sugars (7–18%), lipids (3–8%), minerals, vitamins, and essential amino acids [8]. It possesses some biological properties such as antibacterial [9], anti-cancer [10], immunomodulatory [11], and antioxidant [9,12,13] properties. It also improves menopausal symptoms [14], increases fertility [15], improves reproductive performance, and reduces OS status in male rabbits [16]. Studies have shown that intake of RJ increases progesterone hormone [17] and pregnancy rate [18] in female sheep. RJ has also been shown to modulate estrogenic activity by interaction with estrogen receptors (ERs) and to enhance mRNA expression of estrogen-responsive genes [19]. 10-Hydroxy-trans-2-decenoic acid (10-HDA), 10-hydroxydecanoic acid (HDAA), trans-2-decenoic acid, and 24-methylenecholesterol [20] are compounds that are present in RJ and have been identified as the most effective ligand-binding assays for ERs. To date, no study has been performed on the possible anti-androgenic effects of RJ on reproductive parameters in a PCOS animal model. Therefore, in the current study, we evaluated various doses of RJ for any effects on hormonal profile, estrus cycle, oxidant-antioxidant status, and ovarian histology, in relation to the presence of its phytochemical and bioactive compounds.

RJ from honeybee (Apis mellifera) was purchased from a local beekeeper in Johor, Malaysia. It was collected during the period of February to June (dry season) and stored at −80 °C. On the basis of the body surface area normalization method, the dose of RJ (100 mg/kg in rat) for the animal study was relative to the amount of fresh RJ traditionally consumed in humans, which is 1 g/kg body weight [21]. Therefore, the doses used in the present study were 100 mg/kg (as a low dose), 200 mg/kg (as a medium dose), and 400 mg/kg (as a high dose). RJ was freshly prepared by suspending it in distilled water to make 0.5 mL suspension, and it was then administered to the rats by oral gavage.

Phytochemical screening test was performed using previous standardized methods to evaluate the presence for alkaloids, phenols [22], flavonoids [23], glycosides, resins, saponins, tannins, terpenoids, and xanthoproteins [24]. Liquid chromatography–mass-spectrometry (LC–MS) analysis was performed to analyze the presence of non-volatile phytochemical compounds. It was performed using Finnegan Surveyor plus HPLC instrument (Shimadzu-Hitachi, Kyoto, Japan) equipped with a diode array detection (DAD) (Shimadzu, Tokyo, Japan) and coupled to a MS (Shimadzu, Tokyo, Japan). The chromatographic system consisted of quaternary pump, auto-sampler, degasser, photodiode-array detector, and automatic thermostatic column compartment. A total of 10 mg of RJ was filtered through a 0.2 µm nylon membrane at a rate of 1 mL/min, then 200 µL/min was split out to the mass spectrometer. The experiment was performed using helium as collision gas at an energy rate of 25–40 eV. The peak mass spectra in mass per charge ions (m/z) were acquired for the possible compound names in the range of 200–600 nm and identification of compounds was performed by using ReSPect (RIKEN MSn spectral database for phytochemicals, Yokohama, Japan).

Forty immature female Sprague Dawley rats (40–50 g; 3 weeks old) were acquired from the Animal Research and Service Centre (ARASC), Universiti Sains Malaysia. Adaptation was allowed for all rats for at least 4 days in laboratory prior to the experiment. The rats were kept under ambient temperature (22 ± 2 °C) with 12:12 h light/dark cycle, water was provided ad libitum, and they were fed a commercial rat diet (Gold Coin Sdn. Bhd., Selangor, Malaysia). The rats were divided by a simple randomization into control (normal healthy rats; n = 8) and testosterone (T)-treated (n = 32) groups. Hyperandrogenism was induced in the T-treated group by daily subcutaneous (SC) injection of T propionate in olive oil (10 mg/kg) for 3 weeks while the control group received an equivalent amount of SC olive oil [25]. After 3 weeks, the animals in each group were daily treated for 4 weeks as follows:

At the end of experimental period, the animals were fasted overnight and anesthetized with intraperitoneal 90 mg/kg ketamine and 5 mg/kg xylazine during diestrus phase. Rats were sacrificed and blood was collected via posterior vena cava for determination of reproductive hormones. The ovary was dissected out for determination of oxidant/antioxidant status and histological assessment. The animal experiment was conducted in accordance with the Guide for the Care and Use of Laboratory Animals of Universiti Sains Malaysia, and this study was approved by the Animal Ethic Committee, Universiti Sains Malaysia (USM/Animal Ethics Approval, 2013 (90) (505)).

During the treatment, estrus cycle was assessed daily by vaginal smear for 4 weeks every morning between 9.00 a.m. and 10.00 a.m. A small amount of 0.9% normal saline was introduced into the entrance of vaginal canal and gently flushed. The suspension was placed on a glass slide using a blunt-ended glass dropper tip to assess the presence of leucocytes, cornified epithelial cells, and nucleated epithelial cells. The slide was closed with cover slip and examined at 10× and 40× magnifications under a light microscope (Leica DM750, LEICA, Wetzlar, Germany). The evaluation of estrus cycle was determined on the basis of the proportion of the cells [26].

The left ovary was carefully dissected and fixed in 10% formalin. The ovary was divided into small parts, processed, and stained with hematoxylin and eosin (H&E). Ovarian histological assessment was based on the number of cystic follicles (more than 12 cysts were considered as abnormal) and the presence of primary follicles, secondary follicles, and corpora lutea. The section was examined under an image analyzer (Olympus, Tokyo, Japan) at 40× magnification.

Phytochemical screening test revealed all nine phytochemical compounds found in RJ (Table 1) together with their reported bioactivities. From LC–MS analysis, we identified 12 non-volatile phytochemical compounds in RJ, and their reported biological activities are presented in Table 2. The compound with the highest mass spectrum was adenosine-5-monophosphate (348 m/z), while sebacic acid (185 m/z) had the lowest mass spectrum. The chromatogram and peak assignments of the compounds are shown in Figure 1.

3.3. Effect of Royal Jelly on Regularity of Estrus Cycle in PCOS Rats

3.5. Effect of Royal Jelly on Ovarian Histology in PCOS Rats

This study was supported by the Universiti Sains Malaysia Short Term Grant (304/PPSP/61312107).

The authors report no conflict of interest. The authors alone are responsible for the content and writing of this article. 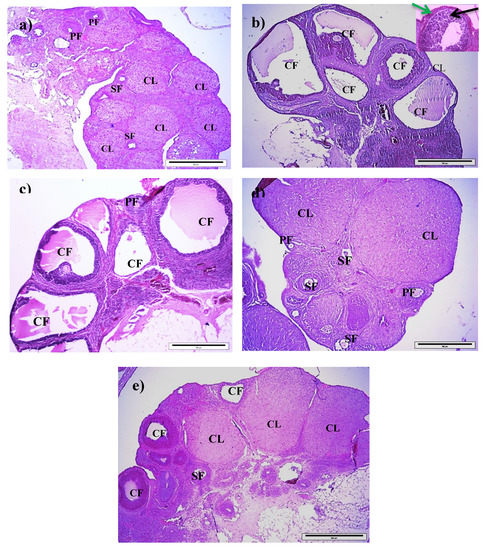