Evaluation of the AGE/sRAGE Axis in Patients with Multiple Myeloma

Obesity is a potent risk factor for kidney disease as it increases the possibility of developing diabetes and hypertension, and it has a direct impact on the development of chronic kidney disease and end-stage renal disease. In this study, we tested the effect of bergamot polyphenolic fraction in a cafeteria with diet-fed rats, an excellent experimental model for studying human metabolic syndrome, as it is able to induce severe obesity with insulin resistance and high plasma triglyceride levels more efficiently than a traditional lard-based high-fat diet used in rodent models. We analyzed the plasmatic oxidative balance by photometric tests, and the expression of cytoplasmic antioxidant enzymes (superoxide dismutase 1 and glutatione S-tranferasi P1) and apoptotic markers (Caspase 8 and 9) in kidney tissues by Western blot analysis. Our results clearly showed that the cafeteria diet induces a marked pro-oxidant effect: significant reduction of plasmatic antioxidant capacity; downregulation of cytoplasmic antioxidant enzymes expression; and activation of apoptotic pathways. All these hallmarks of redox disequilibrium were mitigated by treatment with polyphenolic fraction of bergamot, highlighting its antioxidant effect in the metabolic syndrome. Our data show that the link between obesity and renal damage could be represented by oxidative stress.
Keywords: oxidative stress; biological antioxidant potential; kidney damage; cafeteria diet; bergamot polyphenolic fraction oxidative stress; biological antioxidant potential; kidney damage; cafeteria diet; bergamot polyphenolic fraction

The prevalence of overweight and obesity is constantly growing worldwide, even in low and middle income countries [1]. The most alarming aspect of this pandemic of obesity is that increasingly involves adolescents and children [2]. These findings highlight the necessity for development of effective food-policy actions focused on the key determinant of obesity, a healthy diet. Epidemiologic studies have highlighted the strong correlation between high body mass index (BMI) and several chronic diseases, including cardiovascular disease [3,4], cancers [5], and renal diseases [6,7,8]. Chronic kidney disease (CKD) represents a major public health concern and the main consequences include loss in renal function and cardiovascular complications [9].
Obesity is a potent risk factor for the development of new-onset kidney disease as it increases the possibility of developing diabetes and hypertension, and it has a direct impact on the development of CKD and end-stage renal disease (ESRD). The mechanisms whereby obesity may cause or exacerbate CKD remain unclear. It has been hypothesized that, to meet the high metabolic needs of the increase in body weight, a compensatory mechanism of hyperfiltration occurs with consequent increase in intraglomerular pressure that can damage the kidney structure and raise the risk of developing CKD in the long-term [6]. Indeed, observational studies showed that metabolically healthy obese subjects (without diabetes or hypertension) present a high risk of developing CKD, suggesting that obesity per se may cause renal dysfunction and kidney damage [10]. In particular, higher visceral adipose tissue has been associated with renal damage and great mortality in CKD patients, highlighting a direct role of visceral adiposity in organ damage [11,12,13]. Interestingly, also non-alcoholic fatty liver disease (NAFLD), a pathology characterized by fat accumulation in the liver in the absence of significant alcohol intake, was associated with an increased risk of CKD [14]. This harmful effect is probably due to the endocrine activity of adipose tissue via production of several adipokines involved in the development of inflammation, oxidative stress, abnormal lipid metabolism, increased production of insulin and insulin resistance [6]. Increased ROS production was observed in obesity and is closely linked to the development of metabolic syndrome and diabetes [15]. In addition, adiposity may be a potent, independent amplifier to the inflammatory and oxidative milieu already present in CKD [16].
Several studies have investigated the beneficial properties of various phytochemicals with particular attention to both antioxidant and anti-inflammatory activities. To date, existing studies appear encouraging, but results are premature to translate into clinical practice [17]. In particular, flavonoids, a family of polyphenols found abundantly in fruits, vegetables, nuts, whole-grains and vegetable oils consumed by humans, have been extensively studied and their beneficial effects have been documented in many diseases [18,19,20,21,22,23,24,25]. Citrus fruits and their juices show a high content of flavonoids and their nutraceutical efficacy has been shown in many studies. Bergamot (Citrus bergamia Risso et Poiteau) and bergamot-derived extracts, such as bergamot polyphenol fraction (BPF) have attracted a considerable attention due to its peculiar composition and the highest content of Citrus flavonoids, such as naringin, hesperidin and neoeriocitrin [26,27]. Its lipid-lowering, anti-diabetic, anti-inflammatory, and autophagy-stimulating activity have been confirmed in both animal models and clinical studies [28,29,30,31,32]. Although the metabolic effects of BPF suggest an underlying redox-balancing activity, this property has not been properly evaluated and documented so far. In addition, some authors have proposed a new mechanism of how food antioxidants exert their health-protective effects, i.e., the oxidative activation of the Nrf2 signaling pathway [33]. This mechanism, called “para-hormesis”, keeps antioxidant enzymes at the optimal levels consistent with good health [33]. In light of this, additional research is necessary to establish how bergamot-derived extracts interact with human physiological and pathological processes and what level of consumption (metabolism/excretion) is required to achieve health benefits.
In this work, we used a cafeteria (CAF) diet-fed rats, an excellent experimental model for studying human metabolic syndrome, as it is able to induce severe obesity with insulin resistance and high plasma triglyceride levels than a traditional lard-based high-fat diet used in rodent models [32]. To test the bergamot effect, we administered BPF to CAF-diet-fed rats. We hypothesized that the increased oxidative stress in obesity models may contribute to organ damage through activation of apoptosis signaling pathways and that BPF could have beneficial antioxidant effects. In order to test this assumption, we evaluated in our experimental models (i) plasmatic pro-oxidant/antioxidant status, (ii) expression of cytoplasmic antioxidant enzymes (SOD1 and GSTP1) and (iii) extrinsic and intrinsic apoptotic pathways.

Five-week-old male Rcc:Han WIST rats (n = 26; Harlan Laboratories, Indianapolis, IN, USA) were housed under controlled lighting (lights on at 7:00 a.m. and lights off at 7:00 p.m.) and temperature (20 ± 2 °C) conditions. The animals had access to water and were fed ad libitum with standard chow diet (SC, Harlan Teklad) for 3 weeks before assignment to one of four experimental groups. Ethics Statement: this animal study was approved by a local animal welfare committee and by the Italian Ministry of Health (project code: 01-24/09/2013), according to Legislative Decree 116/1992, which was in force when the study was proposed (before 4 March 2014). All surgery was performed under anesthesia and all efforts were made to minimize animal suffering.

The CAF diet comprised cookies (sweet or briny), milk chocolate, cereals, potato chips, processed meats, condensed milk with sugar, high-fat cheese (parmesan or provolone), and so on, were provided in excess. The CAF diet (75 kcal/rat/day) was offered in addition to standard chow (SC) diet ad libitum every 2–3 days. Each time a mix of snacks (salty and sweet) was supplied to stimulate hyperphagy. The snack consumption was monitored weekly by weighing them before and after consumption (corrected for drying), in order to calculate the amounts ingested of each one in all cages. According to the product labels’ information, CTR diet provided an energy value of 3.0 kcal/g, against the mean 4.2 ± 1.1 kcal/g of the items included in CAF diet [30]. BPF, as previously prepared and characterized for polyphenol content [26,30], was kindly provided by Herbal and Antioxidant Derivatives srl. (Polistena, RC, Italy). BPF contains 40% of flavonoids. The remaining part of BPF is a mixture of other polyphenols (mainly catechins, salts, fatty acids, carbohydrates and other compounds ([27] and unpublished observations). Neohesperidose-linked flavanones, such as naringin, neoeriocitrin and neohesperidin, account for over 60% of all flavonoids. BPF was provided (diluted in drinking water) daily or every 2 days in the BPF and BPF + CAF groups. We did not observe any change in pH, color and taste within 48 h. The consumption of water and BPF was monitored daily or every 2 days to calculate the daily intake of BPF. The BPF concentration in drinking water was progressively adjusted to the mean body mass in the cage to ensure a mean 50 mg/kg/rat/day dose over a 3-month period. This dose was five times higher than the previously tested dose in humans (1000 mg/100 Kg = 10 mg/Kg [28]) to account for five times higher metabolic rate in rodents according to Khan and coworkers [34].

At week 14, the animals were sacrificed under Zoletil (80 mg/kg) and Dormitor anesthesia for blood and tissue collection. The blood was collected by cardiac puncture in appropriate blood collection tubes, centrifuged (1700× g; 10 min at room temperature) and plasma were stored at −80 °C until use. The animals were perfused with 150 mM NaCl solution to remove excess of blood and to collect organs.

3.1. Effects of CAF Diet and BPF Treatment on Obesity and Blood Parameters

In laboratory rodents, obesity is defined as the achievement of a 20% increase in body mass index [39]. The CAF diet rapidly induces weight gain and obesity and after 14 weeks of treatment we found an increase in body weight of 31.97%. The BPF supplementation significantly reduced the final body weight in our obesity model indeed BPF + CAF group presents an increase in body weight of 19.46% with respect to CTR group. No significant effects of BPF on body weight were observed in animals fed SC diet and consuming daily bergamot polyphenols (BPF group) (Table 1). Concerning plasmatic biochemical profiles after 14 weeks of treatment, CAF diet led to a significant increase in blood glucose levels (+52.17%) with respect to CTR rats. Similarly, CAF diet significantly upregulated triglycerides level (+51.4%). Interestingly, our CAF diet protocol did not alter total and HDL cholesterol levels, while we observed a significant reduction of LDL-cholesterol in all treated groups. Triglyceridemia, significantly upregulated in CAF group, was potently reduced in BPF + CAF rats (−28.3%, p = 0.006), in agreement with our previous observations [28]. BPF also reduced blood glucose levels in CAF animals (−11.5%, p = 0.044). No significant differences in any relevant hematologic parameter were observed between the CTR and BPF groups (Table 1). The analysis of creatinine levels shows no variation in any of the experimental groups, indicating that renal function is preserved (Table 1).

Data collected in the present study show that the link between obesity and renal damage could be represented by oxidative stress. Moreover, we highlighted the alteration of the plasma antioxidant capacity as the first detectable and reversible event. Our results can contribute to better understand mechanisms underlying the relationship between obesity and renal tissue damage.

Obesity is a complex, multi-factorial pathology and represents a potent risk factor for kidney disease. The aim of our study was to assess if the CAF diet, a useful model for studying human metabolic syndrome, can induce renal tissue damage in terms of both oxidative perturbation (altered expression antioxidant enzymes) and apoptotic pathway (intrinsic/extrinsic) activation. In parallel, we evaluated the BPF cytoprotective effects. Our results showed significant alterations in redox status in the CAF-fed rats and revealed that BPF treatment enhances the plasmatic and cellular ability to neutralize the oxidative insults, mainly in the case of redox disturbance due to the CAF diet. A deeper understanding of the mechanisms underlying the relationship between obesity and progression of renal tissue damage can provide new treatment possibilities. 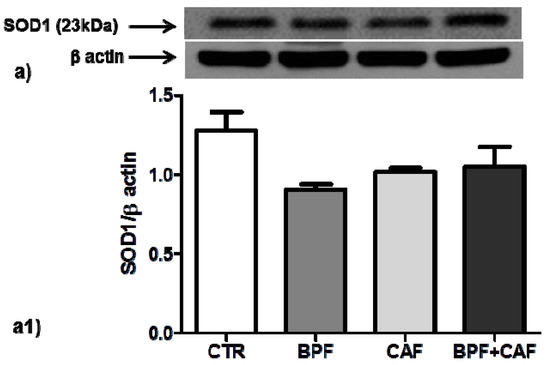 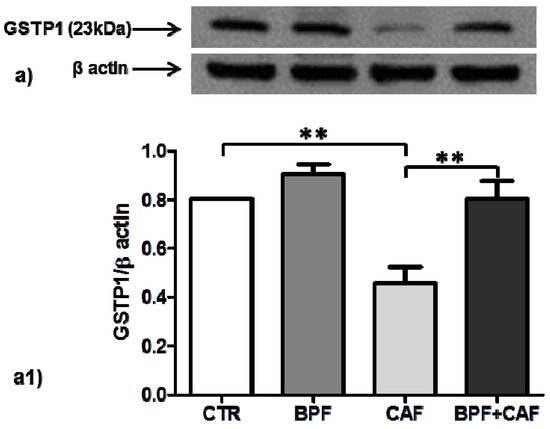 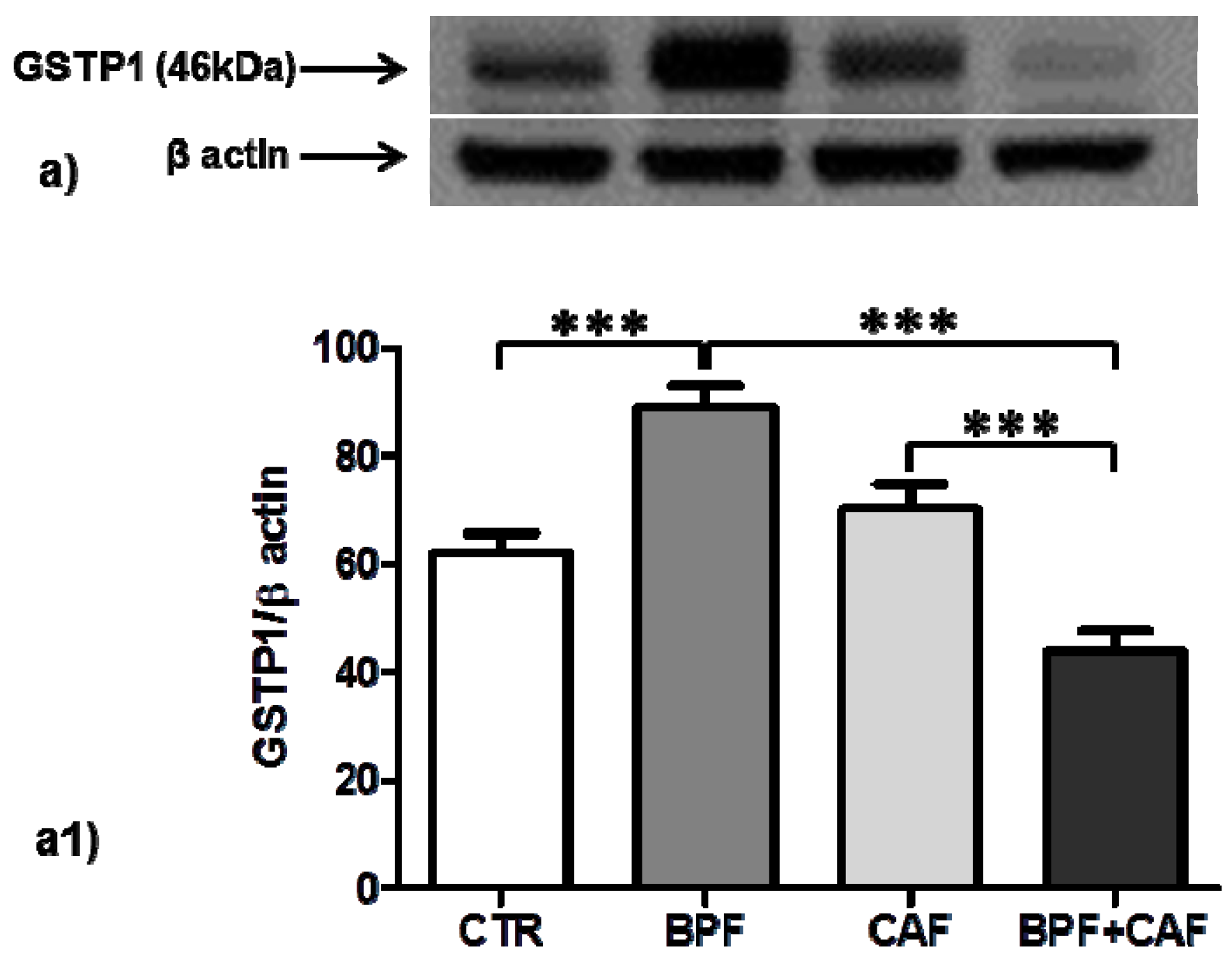 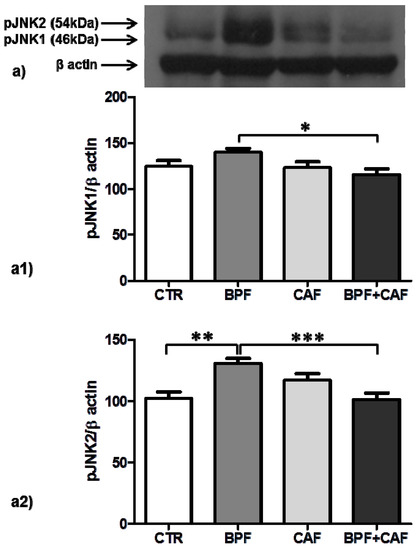 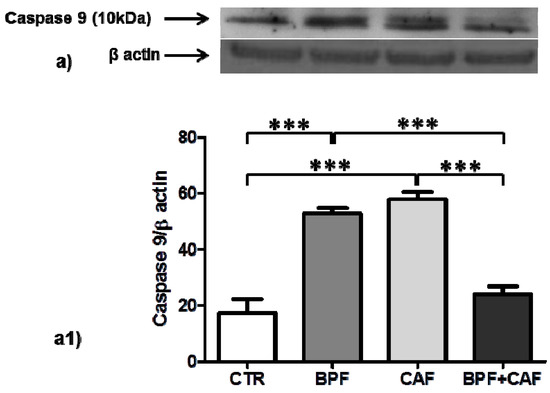 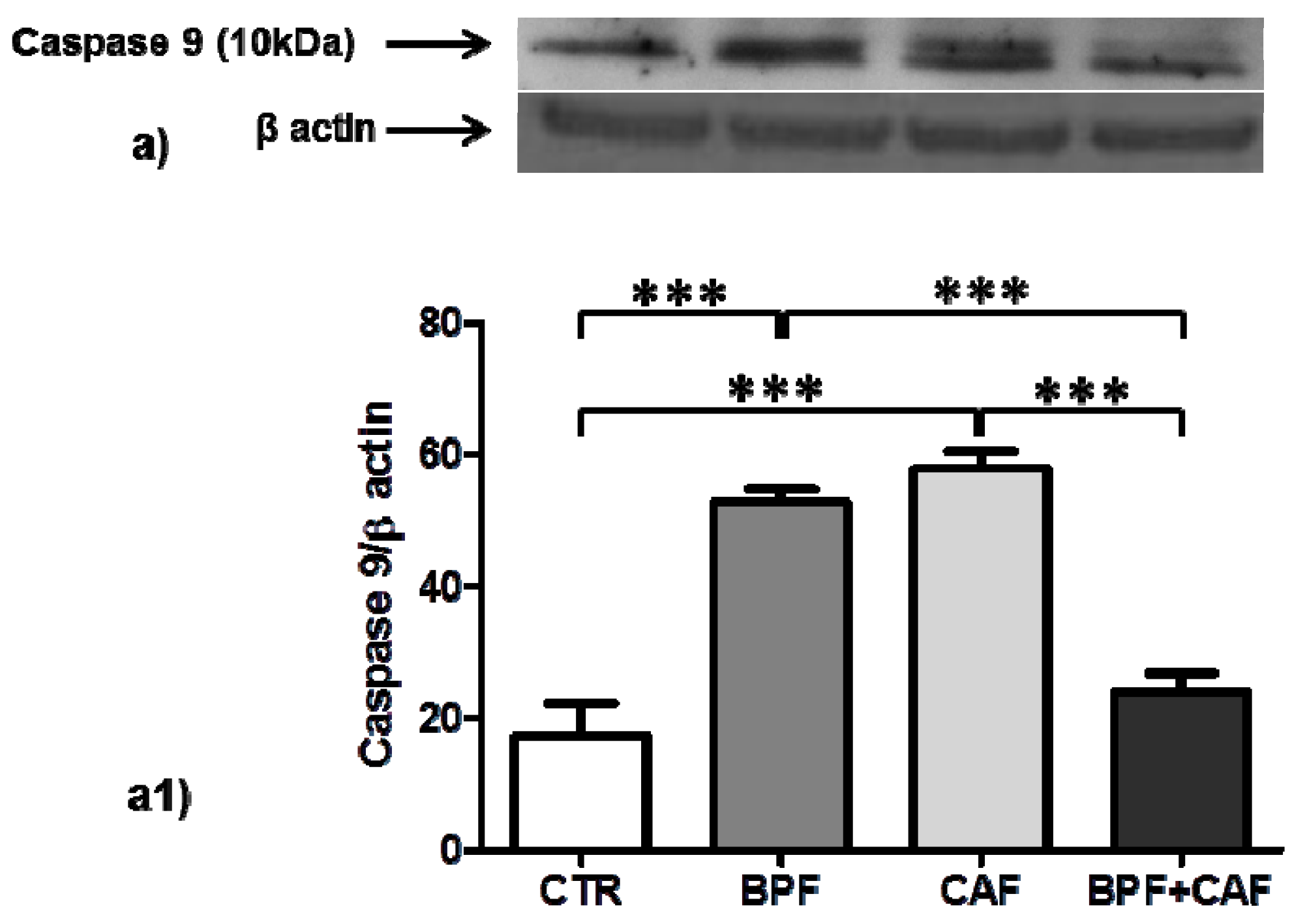