Can Evaluative Conditioning Change Well-Established Attitudes Towards Popular Brands? Your Brain Says Yes Even Though Your Mouth Says No
Previous Article in Journal

Background: Accumulating research demonstrates that the timing of exercise plays an important role in influencing episodic memory. However, we have a limited understanding as to the factors that moderate this temporal effect. Thus, the purpose of this systematic review with meta-analysis was to evaluate the effects of study characteristics (e.g., exercise modality, intensity and duration of acute exercise) and participant attributes (e.g., age, sex) across each of the temporal periods of acute exercise on episodic memory (i.e., acute exercise occurring before memory encoding, and during memory encoding, early consolidation, and late consolidation). Methods: The following databases were used for our computerized searches: Embase/PubMed, Web of Science, Google Scholar, Sports Discus and PsychInfo. Studies were included if they: (1) Employed an experimental design with a comparison to a control group/visit, (2) included human participants, (3) evaluated exercise as the independent variable, (4) employed an acute bout of exercise (defined as a single bout of exercise), (5) evaluated episodic memory as the outcome variable (defined as the retrospective recall of information either in a spatial or temporal manner), and (6) provided sufficient data (e.g., mean, SD, and sample size) for a pooled effect size estimate. Results: In total, 25 articles met our inclusionary criteria and were meta-analyzed. Acute exercise occurring before memory encoding (d = 0.11, 95% CI: −0.01, 0.23, p = 0.08), during early memory consolidation (d = 0.47, 95% CI: 0.28, 0.67; p < 0.001) and during late memory consolidation (d = 1.05, 95% CI: 0.32, 1.78; p = 0.005) enhanced episodic memory function. Conversely, acute exercise occurring during memory encoding had a negative effect on episodic memory (d = −0.12, 95% CI: −0.22, −0.02; p = 0.02). Various study designs and participant characteristics moderated the temporal effects of acute exercise on episodic memory function. For example, vigorous-intensity acute exercise, and acute exercise among young adults, had greater effects when the acute bout of exercise occurred before memory encoding or during the early memory consolidation period. Conclusions: The timing of acute exercise plays an important role in the exercise-memory interaction. Various exercise- and participant-related characteristics moderate this temporal relationship. View Full-Text
Keywords: cognition; memory function; physical activity cognition; memory function; physical activity
►▼ Show Figures 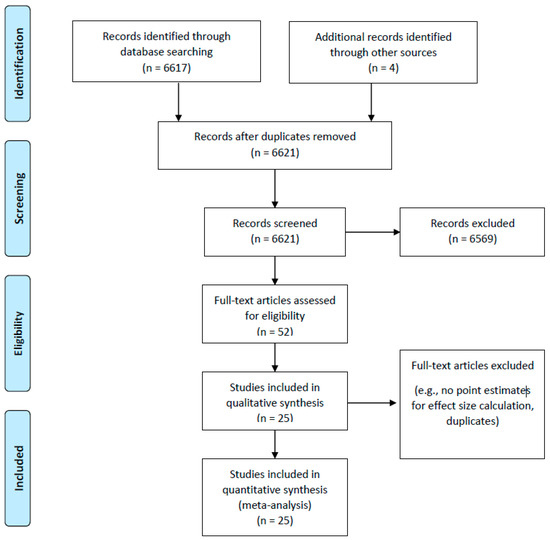