Background: Cognitive disorders are reported to be common in patients with primary Sjogren’s syndrome (pSS). In some cases, they are the first clinical manifestation, preceding the diagnosis of pSS by two years on average. Aim: A systematic review was conducted to explore cognitive impairment in pSS, with reference to diagnostic methods and their relationship with laboratory data and clinical manifestations. Materials and Methods: According to the PRISMA 2009 checklist, we carried out a comprehensive literature search in the three main bibliographic databases: MEDLINE, EMBASE, and PsycINFO (NICE HDAS interface). The following main search terms were used: primary Sjogren syndrome, neurological manifestations, fatigue, cognitive functions, psychiatric manifestations, mild cognitive impairment, dementia, and neurocognitive disorder. The search was made on 14 September, 2018. References from all selected studies were also examined. Inclusion criteria were: all studies and case-reports published in any language from 2002 that assessed the association of pSS (according to classification criteria proposed by the 2002 American/European collaborative group (AECG)) with all types of cognitive impairment (including dementia). Exclusion criteria were: reviews, abstracts, secondary Sjögren’s syndrome (SS), and all articles in which other classification criteria were used. Results: The initial search yielded 352 articles, of which 253 were excluded based on the title and abstract review. A total of 54 articles underwent a full-length review, and 32 articles were excluded. Data were extracted from 18 studies and three case-reports involving a total of 6196 participants. In most cases, cognitive dysfunction was a brain fog or a mild cognitive impairment (MCI). Occasionally, an autoimmune dementia was present. The relationship between pSS and degenerative dementias, such as Alzheimer’s disease (AD), was a controversial issue, even if some investigators hypothesized that pSS could be a risk factor. Several unmet needs were highlighted. First, some of the included studies had not reported the severity of pSS; hence, few correlations between disease severity and cognitive function were possible. Secondly, the evaluation of the pathogenetic role of comorbid diseases was often absent. The lack of information on the type of dementia represented a third critical point in the majority of the included studies. Conclusions: This systematic review confirmed that adequate studies on cognitive function in pSS are scarce, mostly performed on small-sized samples, and often conflicting. The routine assessment of cognitive function in patients with pSS seems advisable and it will help to elucidate some of the unmet needs highlighted by this review in future appropriately designed studies. View Full-Text
Keywords: primary Sjögren’s syndrome; cognitive functions; mild cognitive impairment; brain fog; dementia; fatigue; systematic review primary Sjögren’s syndrome; cognitive functions; mild cognitive impairment; brain fog; dementia; fatigue; systematic review
►▼ Show Figures 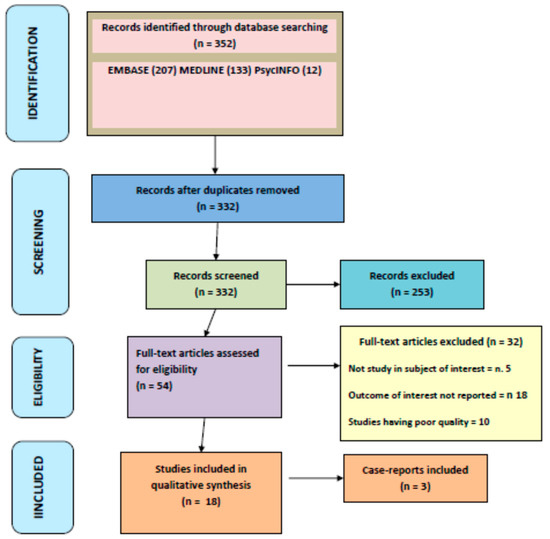