The etiology of neuropsychiatric disorders is multifaceted, characterized by the continual interaction of biological and environmental forces. Stress is a major pervasive source of environmental pressure influencing biological control of mental and emotional well-being. Maladaptive responses to acute and chronic stress can facilitate persistent allostatic mood states of behavior (the physical and psychological toll paid to maintain stability in the face of stress exposure). Such stress-induced imbalances in positive- and negative-reinforcement of behavioral control contributes to the development of substance use disorders, including alcohol use disorder (AUD) [1]. Studying the neurobiological adaptations that occur in relation to stress and substance use (e.g., alcohol consumption) is important for understanding the pathogenesis of individual neuropsychiatric disorders and comorbid disease phenotypes.
Transcriptional reprogramming of gene expression within the central nervous system (CNS) has been proposed as a fundamental molecular process underlying repeated exposure to substances of abuse [2]. Examination of human postmortem brain tissue and animal models for AUD have demonstrated biologically coordinated changes in gene expression throughout several cell-types and areas of the CNS. Specific groups of evolutionarily conserved protein-coding and non-coding gene expression networks are associated with lifetime consumption of alcohol [3,4], suggesting chronic neuroadaptations proportional to substance use. Despite the valuable contributions of postmortem human brain to understanding the neurobiological impact of long-term alcohol use [5], not all of the psychological and pathophysiological measures are appropriately measured or rigorously controlled in human samples. Animal models provide essential translational tools for investigating the direct effects of alcohol and interaction with environmental variables, such as repeated stress, withdrawal, and periods of abstinence.
The rodent model of repeated forced swim stress (FSS) is a chronic test of inescapable stress, inducing a negative state of coping behavior, a prolonged period of poor performance due to uncontrollable and adverse conditions [6,7]. In a mouse (C57BL/6J) model of chronic intermittent ethanol (CIE) vapor exposure, known to affect tolerance and increase ethanol consumption [8,9], FSS causes robust increases of ethanol consumption in mice with a history of CIE exposure [10,11]. The added component of FSS in CIE mice is associated with greater amounts of alcohol consumption than either a no stress exposure or a model of repeated social defeat stress and does not affect more moderate levels of alcohol consumption in non-dependent mice [10]. Escalation of alcohol consumption in dependent mice via the interaction of FSS suggests, at least in part, convergent biological pathways activated by chronic stress and alcohol [11].
In an effort to better understand the shared and nonshared molecular adaptations in response to FSS and CIE, the current investigation examined transcriptome-wide alterations in gene expression across the medial prefrontal cortex (CTX), a brain-region known to be involved in decision-making and compulsive alcohol consumption [12]. The combined effect of FSS and CIE on changes in global gene expression that occur within the CTX is currently unknown. Prior studies have demonstrated brain-regional and temporal changes in gene expression for male C57BL/6J mice with a history of CIE [13,14], providing supportive evidence for widespread CNS plasticity following chronic alcohol exposure on the CTX and other brain-regions. Our results demonstrate conditional long-term changes in CTX gene expression for behavioral models of alcohol consumption and chronic inescapable stress. The combined effect of this measure of stress and alcohol consumption is essential for continued adaptations in CNS plasticity.

The ANOVA indicated significant main effects of group (F(3,97) = 64.07; p < 0.0001) and phase (F(4,388) = 70.82; p < 0.001) and a significant interaction between these factors (F(3,388) = 23.05; p < 0.0001). Importantly, the time of brain collection did not have a significant effect (F(2,97) = 0.24) and did not have a significant interaction with the other factors under analysis. Post-hoc comparisons based on the significant group × phase interaction indicated that mice in the CIE and CIE + FSS groups consumed more ethanol during all test cycles compared to CTL mice within each test cycle and their own baseline (* in Figure 3). This analysis also showed that mice in the FSS group had a lower intake level during Test 3 compared to their own baseline (^ in Figure 3). Importantly, mice in the CIE + FSS evidenced significantly higher levels of intake compared to CIE mice during test Cycles 2, 3, and 4 (# in Figure 3).

Repeated and uncontrolled behavioral disturbances are a significant source of environmental pressure capable of adversely impacting mental health. Using an animal model of chronic stress and alcohol dependence, our current studies demonstrate an array of transcriptomic alterations within the CTX that relate to increased alcohol consumption associated with chronic alcohol (CIE) exposure, as well as the capacity of stress (FSS) to further enhance elevated drinking in dependent mice. Assessing time-dependent changes in gene expression reveals both transitory periods of transcriptional regulation, as well as persistent (long-lasting) gene expression changes associated with this CIE-stress drinking model. Through a comprehensive evaluation of transcriptome-wide disruptions in the regulation of gene expression, results from the present study provide a useful resource for discovering unknown biological contributors to stress-related excessive alcohol drinking associated with dependence.

The following are available online at https://www.mdpi.com/2076-3425/10/5/275/s1: Table S1: Enrichment of differentially expressed genes for biological categories that are uniquely altered within an individual behavioral group (CTL, CIE, FSS, and CIE + FSS) and are consistently overrepresented across each of the three timepoints (0 h, 72 h, and 168 h). Table S2: List of 292 statistically significant genes (padj < 0.05) assigned to 14 clusters following a hierarchical cluster analysis using R package DEGreport. 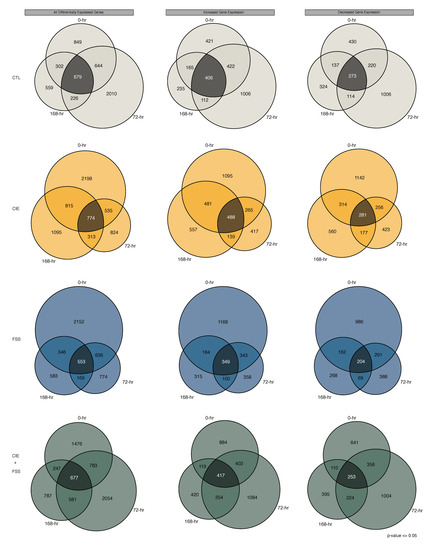 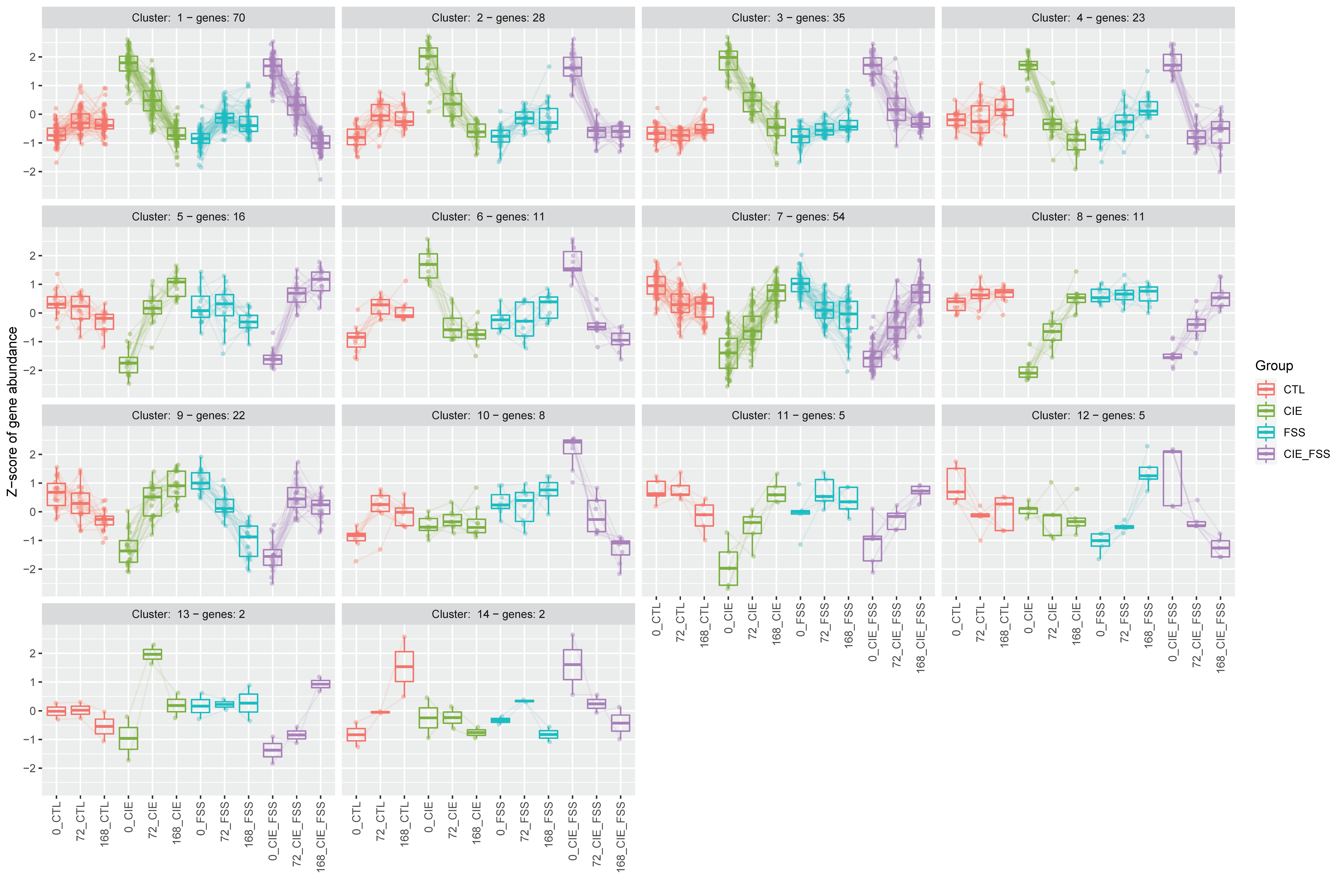