The Maximum Eigenvalue of the Brain Functional Network Adjacency Matrix: Meaning and Application in Mental Fatigue Evaluation
Next Article in Special Issue

Glioblastoma is a solid, infiltrating, and the most frequent highly malignant primary brain tumor. Our aim was to find the correlation between sex, age, preoperative Karnofsky performance status (KPS), presenting with seizures, and extent of resection (EOR) with overall survival (OS), progression-free survival (PFS), and postoperative KPS, along with the prognostic value of IDH1, MGMT, ATRX, EGFR, and TP53 genes mutations and of Ki67 through the analysis of a single-operator series in order to avoid the biases of a multi-operator series, such as the lack of homogeneity in surgical and adjuvant nonsurgical treatments. A randomized retrospective analysis of 122 patients treated by a single first operator at Sapienza University of Rome was carried out. After surgery, patients followed standard Stupp protocol treatment. Exclusion criteria were: (1) patients with primary brainstem and spinal cord gliomas and (2) patients who underwent partial resections (resection < 90%) or a biopsy exclusively for diagnostic purposes. Statistical analysis with a simultaneous regression model was carried out through the use of SPSS 25® (IBM). Results showed statistically significant survival increase in four groups: (1) patients treated with gross total resection (GTR) (p < 0.030); (2) patients with mutation of IDH1 (p < 0.0161); (3) patients with methylated MGMT promoter (p < 0.005); (4) patients without EGFR amplification or EGFRvIII mutation (p < 0.035). Higher but not statistically significant survival rates were also observed in: patients <75 years, patients presenting with seizures at diagnosis, patients affected by lesions in noneloquent areas, as well as in patients with ATRX gene mutation and Ki-67 < 10%.
Keywords: Glioblastoma multiforme; GTR; STR; KPS; IDH1; MGMT; ATRX; EGFR; TP53; Ki67; Neurosurgery; Oncology; Epilepsy Glioblastoma multiforme; GTR; STR; KPS; IDH1; MGMT; ATRX; EGFR; TP53; Ki67; Neurosurgery; Oncology; Epilepsy

Glioblastoma (GBM) is a solid, infiltrating, highly malignant tumor, and a grade IV glioma according to 2016 World Health Organization (WHO) classification [1]. It is believed that GBM is derived from a small population of cancer cells known as glioma stem cells (GSCs) and that these derive from the uncontrolled proliferation of neuronal stem cells (NSCs) residing in restricted germinal areas: ventricular subependymal zone of the temporal horn of the lateral ventricle (SVZ), the subgranular zone of the dentate gyrus of the hippocampus (SGZ), and of the white subcortical substance [2]. It is the most frequent malignant primary brain tumor (16% of all primitives of the CNS and 54% of glial tumors) [3,4]. The average survival from diagnosis is less than 15 months, with survival rates at between 26%–33% at two years and 3%–10% at five years [5,6]. The development of GBM involves molecular pathways, which are different in primary and secondary lesions [7,8]. Standard treatment provides for maximum surgical resection followed by conformational radiotherapy (~60 Gy/30 fractions) for up to six weeks, concomitant with temozolomide (75 mg/m2/day) and then maintenance therapy with standard temozolomide schedule (150–200 mg/m2 × 5 days, every 28, for 12 cycles) [6]. We used Levetiracetam as a prophylactic treatment for seizures instead of valproate as described by other authors [9]. The objective of this retrospective study was to clarify the influence and correlation of prognostic clinical and molecular factors on survival and quality of life of GBM patients in a mono-operative series, thus avoiding biases related to a multioperator casuistry with the lack of homogeneity of adjuvant treatments. The study also specifically investigated the independence or correlation of the variables examined by means of a multivariate analysis performed with a simultaneous regression model.

A randomized retrospective analysis was performed on 122 patients with histological diagnosis of supratentorial GBM, treated from January 2013 to December 2017 at the Department of Neurosurgery of Sapienza, University of Rome. Preoperative study included an objective neurological examination with evaluation of KPS score and a radiological study performed with MRI 3T after the administration of gadolinium with the integration of DWI, PWI sequences, and spectroscopy. In the case of patients with a lesion in an eloquent area, a functional MRI was performed. The extension of resection was determined by comparing contrast-enhanced MRI images acquired within 24 h after surgical treatment with the preoperative ones, and calculated with the ABC/2 method. All the patients received an antiepileptic prophylaxis (Levetiracetam 1000 mg at the induction and then 500 mg as a maintenance therapy bid for 6 months).

4.1. Characteristics of the Patients

4.2. Characteristics of the Tumors

In total, 59.09% of the tumors were located in the left hemisphere with the following sites in order of frequency: frontal lobe (45.45%), temporal lobe (25.03%), parieto-occipital (15.90%), and parieto-insular-occipital (2.27%). A total of 34.09% of the tumors involved eloquent areas.
The molecular characteristics are shown in Table 2.
The status of IDH and ATRX and the expression of EGFR, TP53, and Ki-67 were evaluated with an immunohistochemical technique, whereas the analysis of DNA methylation was performed by PCR or Southern blotting. In total, 91.18% of the sample had a wild-type IDH1 status and 45.44% of patients presented methylation of MGMT promoter. In 36% of patients there was ATRX loss and 59.08% of the cases showed EGFR overexpression. TP53 was not expressed in 36.36% of the cases, overexpressed in 27.20%, and focally expressed in 13.60%.

Surgery was performed by the same first operator with the aid of the following: neuronavigation system, intraoperative ultrasound, ultrasound aspirator (CUSA-CAVITRON®), thulium laser, and intraoperative neurophysiological monitoring. Of the procedures, 19.40% were conducted in awake surgery so as to monitor, real-time, the functions of the patient during surgery in eloquent areas. GTR (Figure 9) was performed in 85.95% of cases, while STR (Figure 10) in the residual 14.05%. Partial resections (resection < 90%) and biopsies were not included. Our follow-up consisted of radiological evaluation through brain MRI with gadolinium 20 days after surgery and subsequent clinical reevaluation. Cases of recurrence were also treated in our department: 66.54% of patients underwent a second procedure and 24.95% underwent three.

Univariate analyses for sex, age, KPS, seizures at diagnosis, GTR/STR, IDH1, MGMT, ATRX, EGFR, TP53, and Ki-67 compared to OS were conducted with Kaplan–Meier curves and compared with log-rank tests, χ(chi)2, or t-student tests depending on the variables taken into account.
Multivariate statistical analysis was then carried out with bootstrap regression, conducting different regression analyses on the data. The independent variables used were sex, age, preoperative KPS, EOR (GTR or STR), months between 1st and 2nd surgery, methylation of MGMT gene promoter, EGFR over-expression, TP53 mutation, and percentage of Ki-67. The dependent variables were OS, PFS, and postoperative KPS. The so-called “enter” method was used in all regressions. It corresponds to a simultaneous regression model in which all the independent variables are simultaneously introduced into the regression equation [17]. The latter was conducted using the IBM® SPSS 25 statistics software.

On the basis of the results presented, GTR can be considered the only treatment able to allow more than 36 months survival in patients with GBM, though potentially related with postoperative onset of neurological deficits is a worsening in the quality of life. Apart from surgical considerations, molecular biology of GBM plays a fundamental role. IDH1 mutation is a well-known positive prognostic factor for OS and PFS. It is, however, present in a small percentage of patients. MGMT gene promoter methylation is rather more important, being the independent molecular positive prognostic factor related the most with OS and PFS. ATRX loss and low-ATRX mRNA expression influence OS, though having a less remarkable impact on PFS. EGFR amplification/EGFRvIII mutation is a negative prognostic factor for both OS and PFS but the clinical trials performed so far have not been significantly effective. Ki-67 is inversely related to survival: patients with Ki-67 < 10% demonstrate a better outcome.
Multivariate data analysis showed that more than 50% of OS and PFS in the GBM population depends on the variables examined, while there is less correlation between these variables and postoperative KPS. The interval, in months, between tumor removal and recurrence of disease summarizes the efficacy of treatment and indicates the possibility for further intervention, as in our study this was the clinical parameter that more clearly correlates with OS and postoperative KPS.
Further prospective studies and clinical trials are necessary to evaluate, especially in patients without methylation of the MGMT promoter, the efficacy of therapies against EGFR mutations and their combination to stop this pathway at different levels. Treatment of glioblastoma should be therefore targeted according to molecular features. 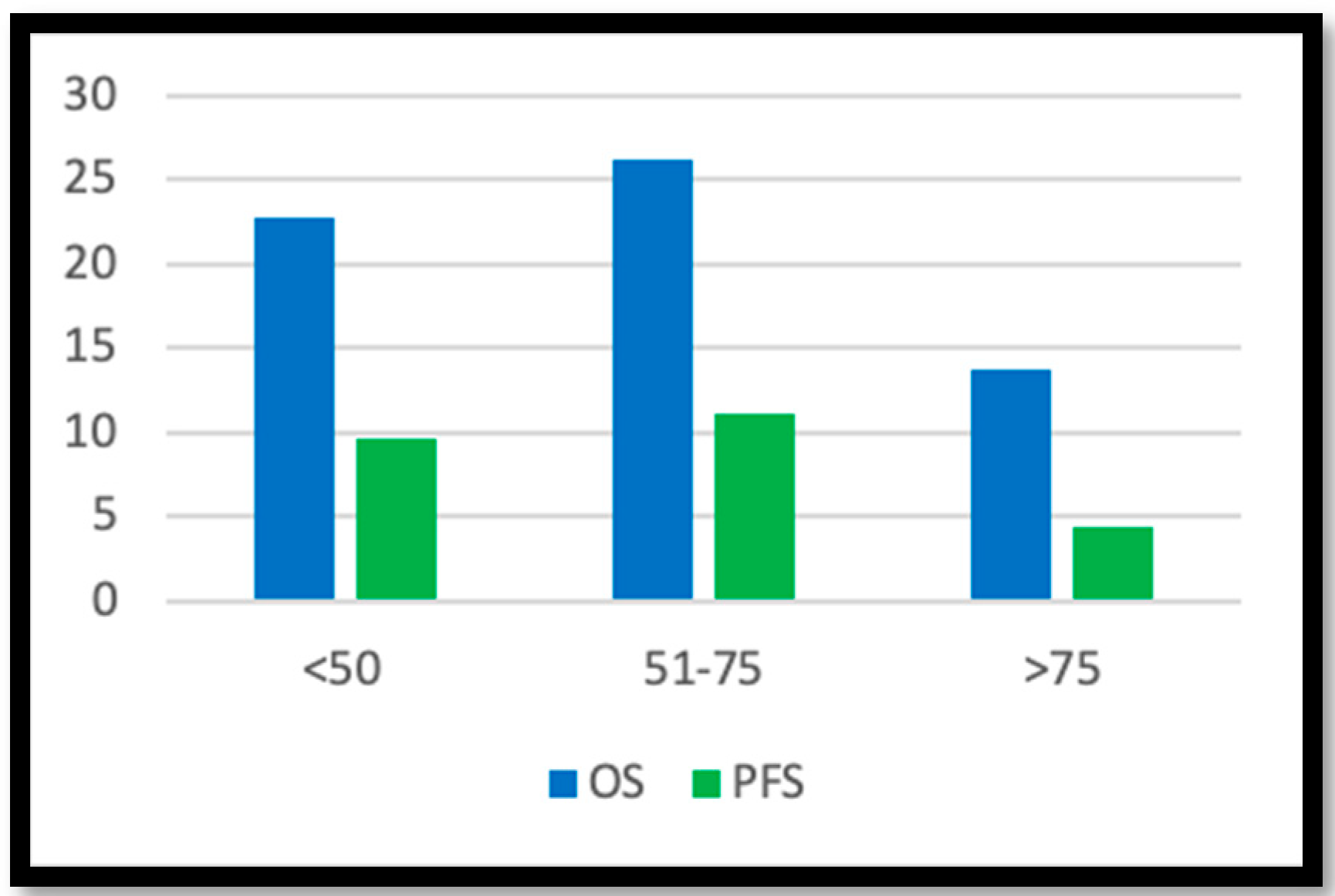 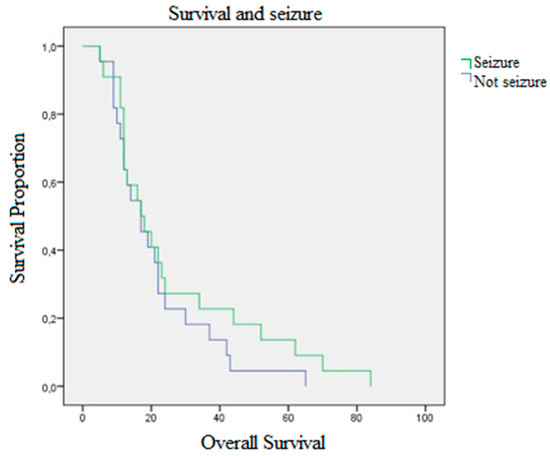 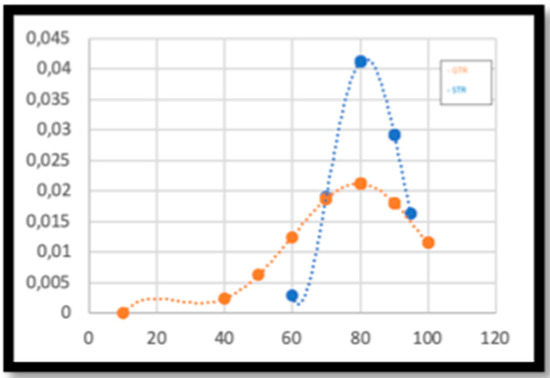 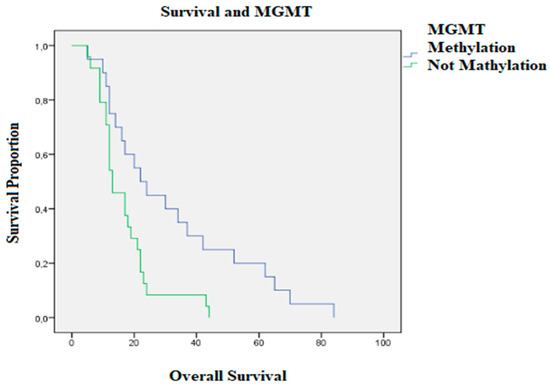 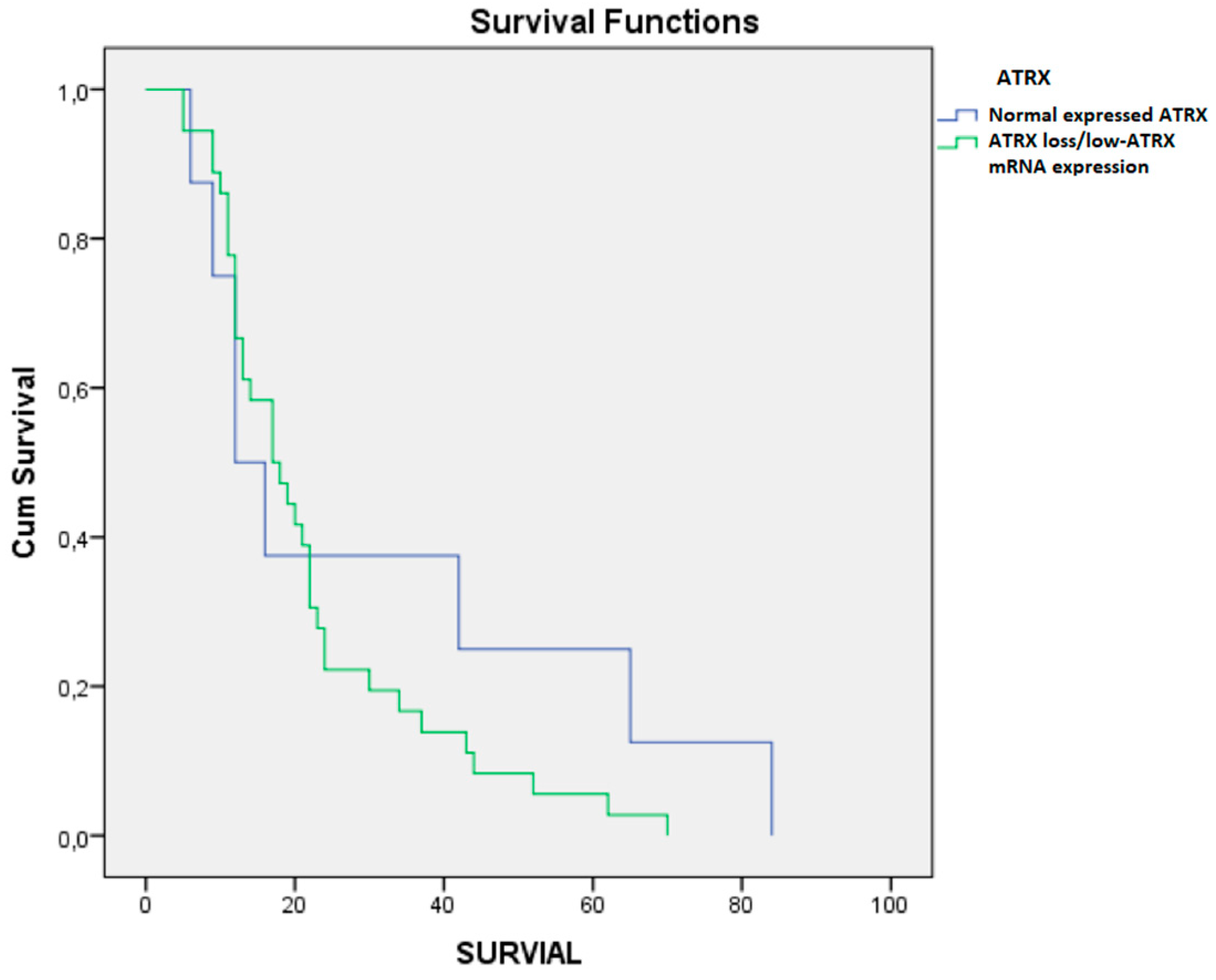 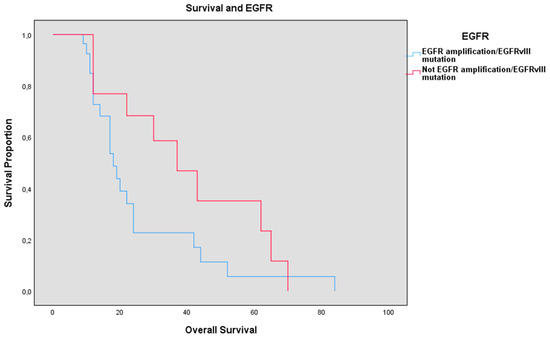 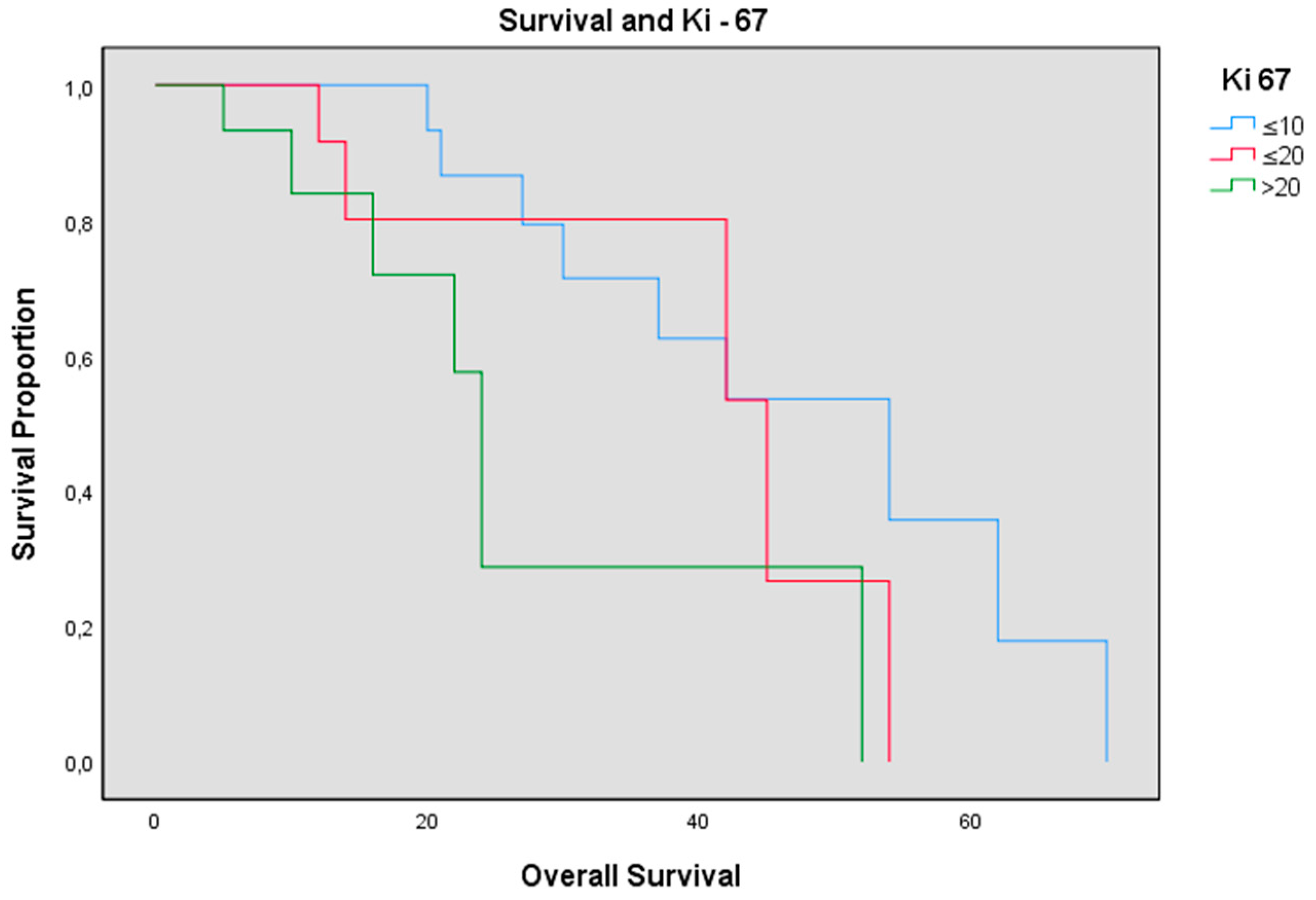 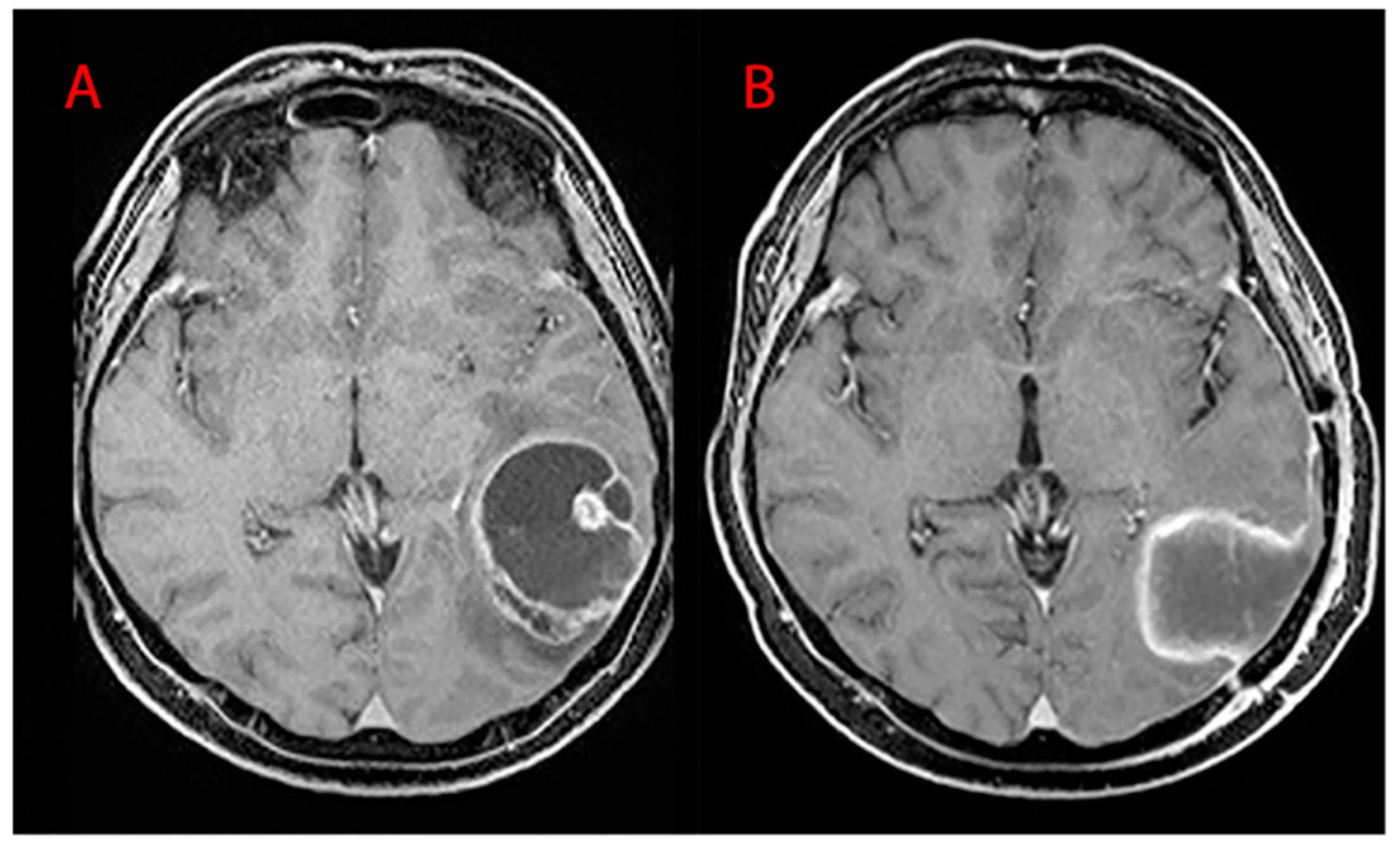 Table 2. Molecular characteristics.
Table 2. Molecular characteristics.
© 2020 by the authors. Licensee MDPI, Basel, Switzerland. This article is an open access article distributed under the terms and conditions of the Creative Commons Attribution (CC BY) license (http://creativecommons.org/licenses/by/4.0/).
We use cookies on our website to ensure you get the best experience. Read more about our cookies here.
Accept
We have just recently launched a new version of our website. Help us to further improve by taking part in this short 5 minute survey here. here.
Never show this again