The competition between various carbohydrates in the binding to Concanavalin A (Con A) can be exploited in gravimetric microsensors that detect changes in mass or viscoelasticity as a function of glucose concentration. Such sensors are based on the immobilisation of Con A as the ligand specific element, and a successful application requires that the binding property of Con A is retained. This paper presents a simplified immobilisation procedure of Con A on a quartz surface, a common material for gravimetric microsensors. Structural assessment with atomic force microscopy confirmed that the surface was covered with a layer of macromolecules. This layer shows the presence of entities of various sizes, presumably monomers, dimers and tetramers among which dimers of the Con A are the most dominant structure. Functional assessment using fluorescent labelled dextran (FITC and Alexa 488) suggests a surface coverage ranging from 1.8 × 1011 to 2.1 × 1012 immobilised fluorescent molecules per cm2. The assay was responsive to glucose over a concentration range from 0–40 mM, but became gradually saturated above 20 mM. Hence, the immobilised Con A is able to bind dextran, which is displaced by glucose in a concentration dependent manner, thus triggering a mass change proportional to the MW of dextran. View Full-Text
Keywords: Concanavalin A; immobilisation; quartz; fluorescence; glucose; dextran; atomic force microscopy Concanavalin A; immobilisation; quartz; fluorescence; glucose; dextran; atomic force microscopy
►▼ Show Figures 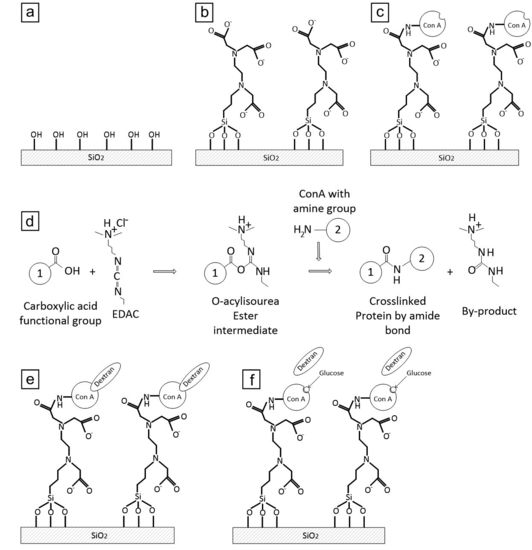 Hoang, T.B.; Stokke, B.T.; Hanke, U.; Johannessen, A.; Johannessen, E.A. The Characterisation and Quantification of Immobilised Concanavalin A on Quartz Surfaces Based on The Competitive Binding to Glucose and Fluorescent Labelled Dextran. Appl. Sci. 2019, 9, 318. https://doi.org/10.3390/app9020318


Hoang TB, Stokke BT, Hanke U, Johannessen A, Johannessen EA. The Characterisation and Quantification of Immobilised Concanavalin A on Quartz Surfaces Based on The Competitive Binding to Glucose and Fluorescent Labelled Dextran. Applied Sciences. 2019; 9(2):318. https://doi.org/10.3390/app9020318


Hoang, Trinh B.; Stokke, Bjørn T.; Hanke, Ulrik; Johannessen, Agne; Johannessen, Erik A. 2019. "The Characterisation and Quantification of Immobilised Concanavalin A on Quartz Surfaces Based on The Competitive Binding to Glucose and Fluorescent Labelled Dextran" Appl. Sci. 9, no. 2: 318. https://doi.org/10.3390/app9020318