Internal Force Analysis of Buried-boring Piles in the Yuanzishan Landslide

Protecting buried pipes requires technology for minimizing the deformation of the ground near the buried pipes. Several studies have been conducted on ground reinforcement methods to prevent ground subsidence and protect buried pipes. Corey, et al. [18] analyzed the relationship between the longitudinal deformation of buried pipes and the static load by forming a geosynthetic layer on top of the buried pipes. In order to achieve this, they [18] conducted an experimental study on the sagging and deformation characteristics of the buried pipes against a static load. Elshimi and Moore [19] assessed the earth pressure that acts on buried pipes according to the distribution of the bearing pressure and the ground conditions. This was done while considering that the underground movement of buried pipes is significantly affected by the characteristics of the backfilling materials. Tafreshi and Khalaj [20] conducted an experiment on the deformation of a high-density polyethylene (HDPE) pipe in reinforced sand under a repeated load. They [20] also analyzed the behavioral relationship according to the relative density of the soil and the pipe burial depth. Tahmasebipoor, et al. [21] simulated geosynthetic reinforced ground in the upper part of the cavity. They carried out a numerical analysis according to the tensile strength of the geosynthetic, the length of the reinforcement layer, and the cavity size, for examining the correlation between the size of the cavity and the ground reinforcement conditions. According to a study by Palmeira and Andrade [22], the stress and deformation generated near the buried pipes were reduced when a geosynthetic layer was installed near the buried pipes. Hegde, et al. [23] and Hegde and Sitharam [24] conducted experiments and numerical analyses for reinforcing the sand with geocells. They discovered that the geocells distribute the underground stress in the lateral direction, thereby reducing the load that is acting on the buried pipes. Tafreshi, et al. [25] conducted a plate bearing test by reinforcing a foundation structure and the lower part of the road pavement with several layers of geocells. They [25] discovered that the underground stress was reduced as the number of geocell layers and the elastic modulus of the ground increased. Pancar and AkpJnar [26] studied the ground reinforcement effect using a variety of geosynthetic materials to improve the bearing capacity of the ground under the pavements. Additionally, Naggar, et al. [27] confirmed, through experimental and numerical analysis, that a geogrid bridging platform can decrease the excessive stress and the deformation generated in buried pipes. Mehrjardi, et al. [28] also conducted a numerical analysis on an experimental model for protecting buried pipes, while considering the sand-rubber mixed soil and the geocell-reinforced foundation. Accordingly, when the geocell and sand-rubber mixed soil are used simultaneously, the ground surface settlement and the sagging of the buried pipes are reduced, even when a repeated load is applied to the ground surface. Ali and Choi [29] examined the risk index while considering a variety of factors that influence the occurrence of ground subsidence, such as damage in the water supply system in cities. Other experimental and numerical analyses on ground reinforcement technology for protecting buried pipes and on technology for reducing underground stress using reinforcement materials have been performed.
Most previous studies used geosynthetic materials for ground reinforcement to protect buried pipes; however, the flexibility of geosynthetic materials causes the sagging of materials under a continuous load. As a result, this limits the prevention of underground cavity expansion and the relaxation zone. Therefore, this study examined the effect of underground stress reduction by using a concrete mat with a high strength as a reinforcement material.

As previously explained, the open cut method employed for restoring ground subsidence involves excavating the cavity area, filling the cavity with soil, and then reinstalling the structures on top. Despite the drawbacks of material segregation, disturbance in the surrounding soil, and poor compaction, this method must be applied when ground subsidence occurs due to damage of the buried pipes.
The open cut method uses a concrete mat that can prevent the ground surface from suddenly collapsing due to the resistance against the top load based on the strength of the material. Therefore, a plate bearing test was performed in a laboratory to quantitatively analyze the reinforcement effect of a concrete mat based on the characteristics in which the stress occurrence was analyzed, according to whether the concrete mat was reinforced.

Jumunjin sand, which is the standard sand in Korea, has a uniform particle size and was used in a soil sample in the experiment to ensure that the stress was evenly distributed over the load on the surface. Table 1 lists the engineering properties of the Jumunjin sand. The Atterberg limit test revealed that the soil sample did not have plasticity, and it was classified as poorly graded sand (SP), according to the Unified Soil Classification System (USCS).
A concrete mat consists of geosynthetic and fill materials (e.g., cement and fine aggregates). Specifically, cement and fine aggregates were applied to fill the space between the top and bottom geosynthetic materials, and watering was performed to secure a sufficient strength for the experiment. A concrete mat is not expandable and has a high strength. The strength of the concrete between geosynthetics was 40 MPa, and rapid hardening cement was applied for ground reinforcement.

Figure 3 shows a schematic diagram of the plate bearing test that was conducted in the laboratory to verify underground stress occurrence according to the reinforcement of a concrete mat.
The ground sample was formed using standard sand in a steel box (1.0 (L) × 1.0 (B) × 0.9 (H)) with a medium density condition. The earth pressure gauge for checking the stress occurrence was installed at G.L. (Ground Level) −0.1 m to G.L. −0.6 m (at 0.1 m intervals) from the center of the steel box in the vertical direction and at the very bottom (G.L. −0.9 m). The diameter of the earth pressure gauge was 0.05 m, and the capacity could be measured up to 500 kPa.
Linear variable differential transformers (LVDTs, 2ea) were installed on the loading plate to measure the settlement of the loading plate (ground surface settlement). Earth pressure gauges (7ea) were applied to measure the stress generated underground, as shown in Figure 3. In addition, the load transferred to the underground area by the loading plate caused maximum stress in the vertical direction. Therefore, in order to measure the maximum stress due to the vertical load affecting the buried pipe damage under the plane stress condition, an earth pressure gauge was installed in the center of the steel box.
Three types of experiments were conducted, in which the concrete mat was installed at G.L. −0.1 m and G.L. −0.2 m from the ground surface and the concrete mat was not installed. The size of the concrete mat applied in this study was 0.9 m × 0.9 m (W × L). Lubrication was performed using oil and plastic wrap to minimize the friction between the soil and wall face of the steel box when the load was transferred underground. The load was applied sequentially from 4, 8, and 12 kPa, in order to minimize the reduction in stress due to soil failure.
The experimental procedure is shown in Figure 4a presents an overall view of the ground sample and the earth pressure gauge installed at a planned depth. Figure 4b shows the concrete mat installed at a planned depth. After the concrete mat and the earth pressure gauge were installed and the ground sample was completed, a loading plate was installed for applying a load. A leveler was used to prevent eccentricity during plate loading (Figure 4c). As shown in Figure 4d, a reaction beam and an oil pressure ram were mounted. In addition, a displacement gauge—linear variable differential transformer (LVDT)—was installed for measuring ground settlement due to the load (Figure 4e).

4.2. FEA Based on the Condition of the Soil Density and the Load Type

4.3. Ratio of the Load Resistance Increase Caused by the Concrete Mat

In this study, a laboratory experiment and numerical analysis were performed using a concrete mat that was developed to prevent ground subsidence in order to evaluate the reinforcement effect. The results of this study are as follows:
This study was conducted considering the simplified ground conditions. However, it is necessary to conduct a study on an analytical model considering various ground conditions (e.g., heterogeneous layered media), in order for the results of this study to produce a solution in engineering in the field. 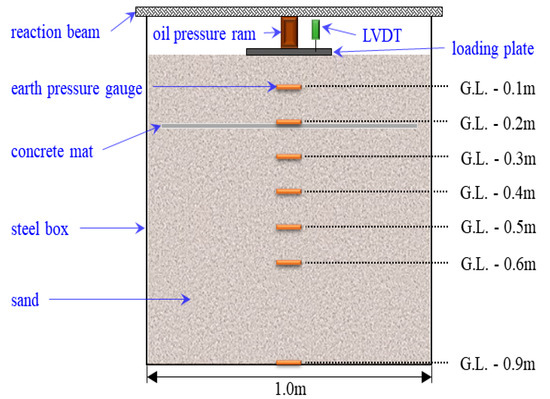 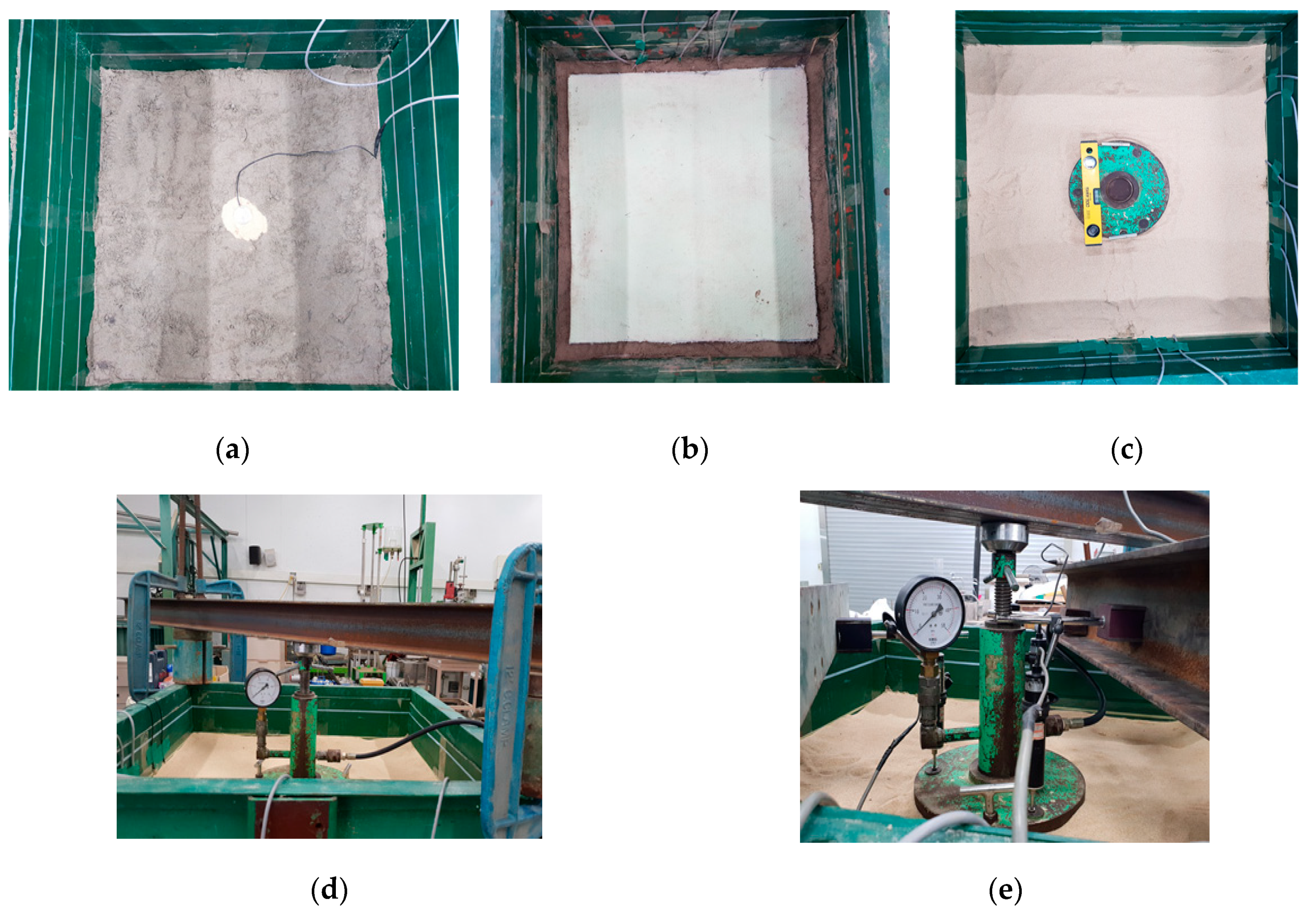 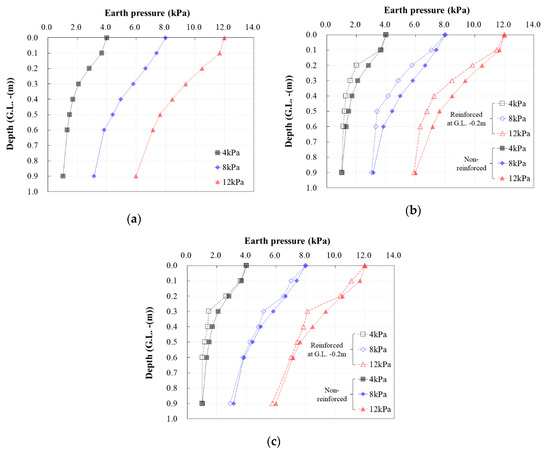 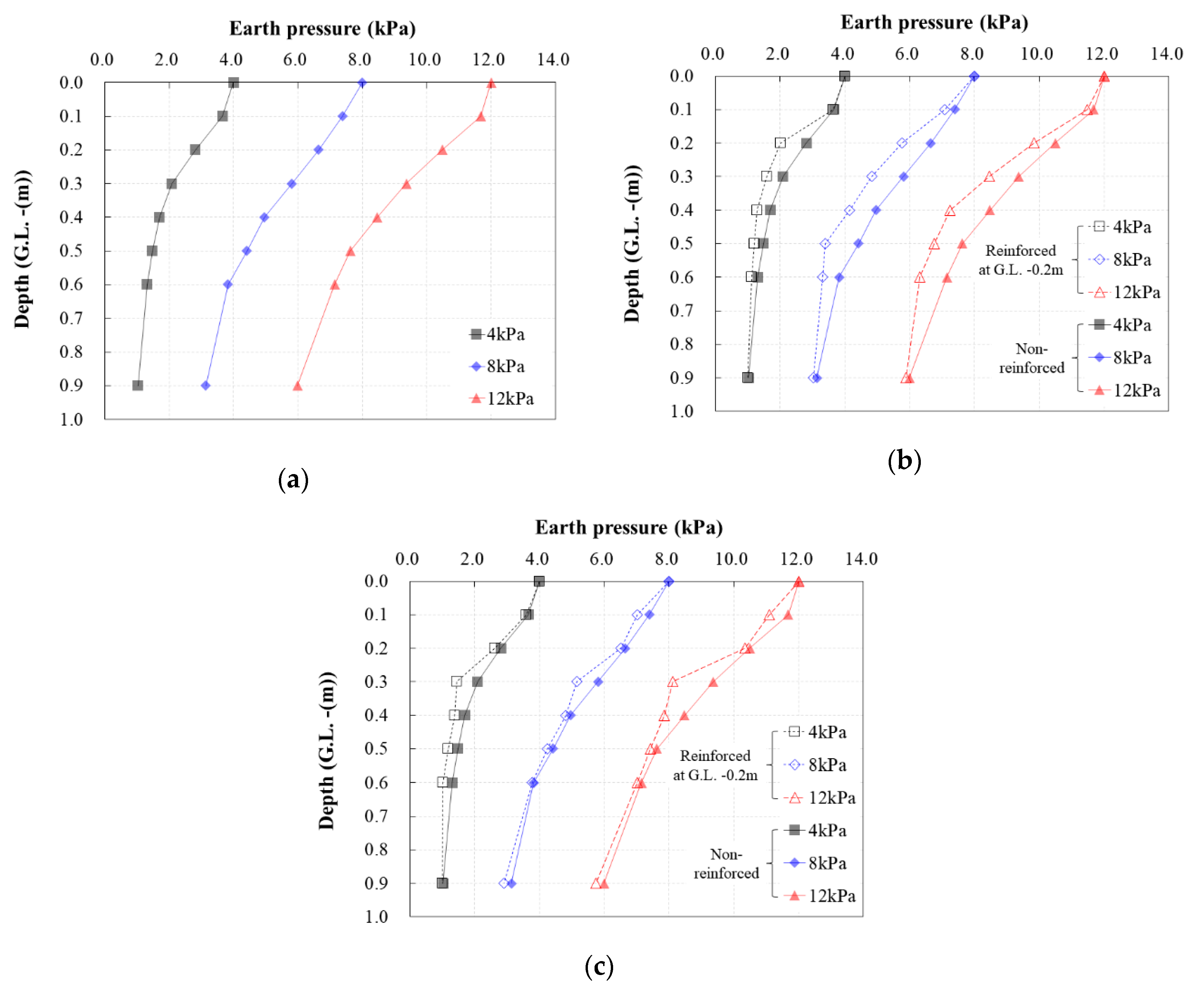 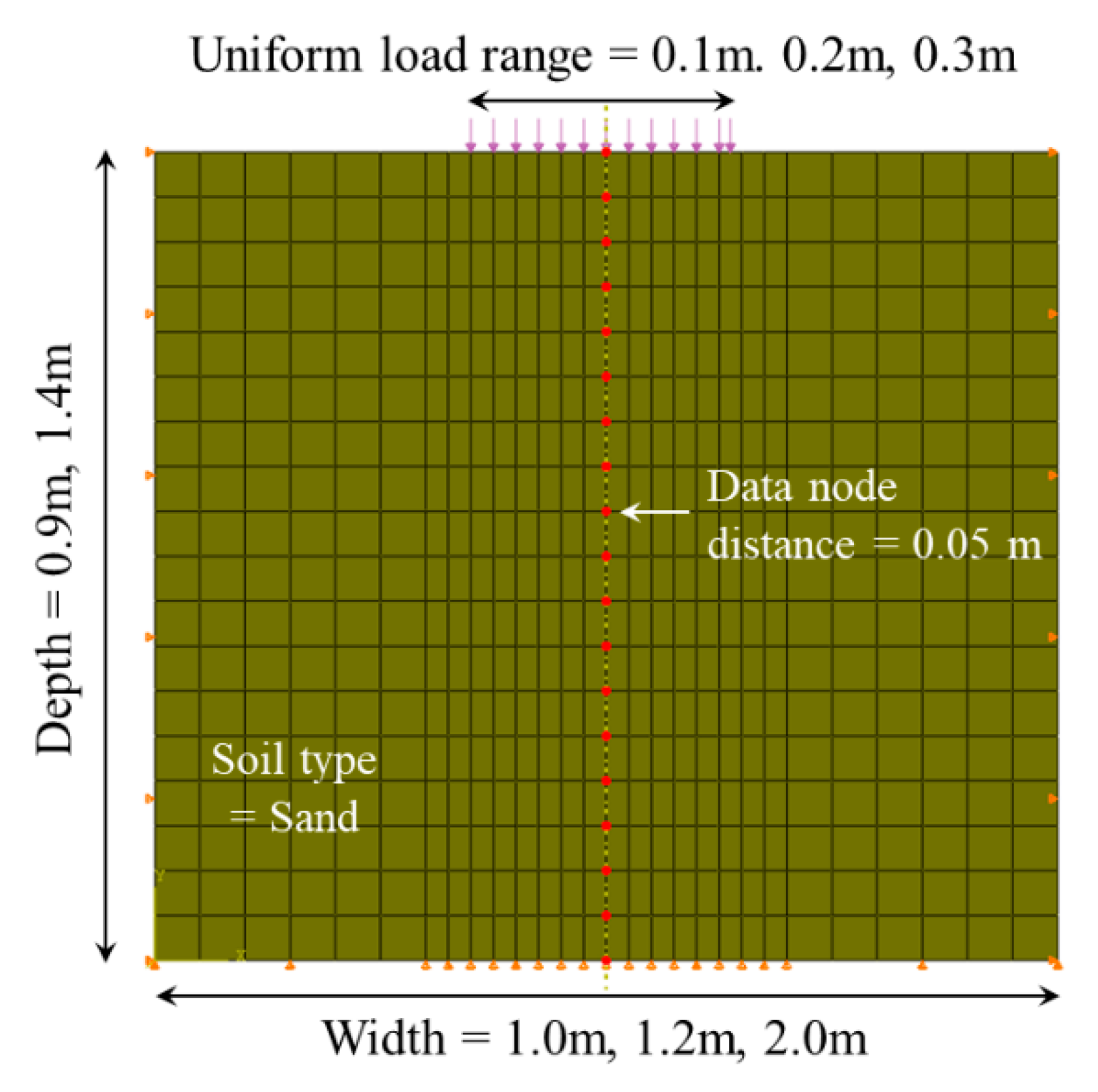 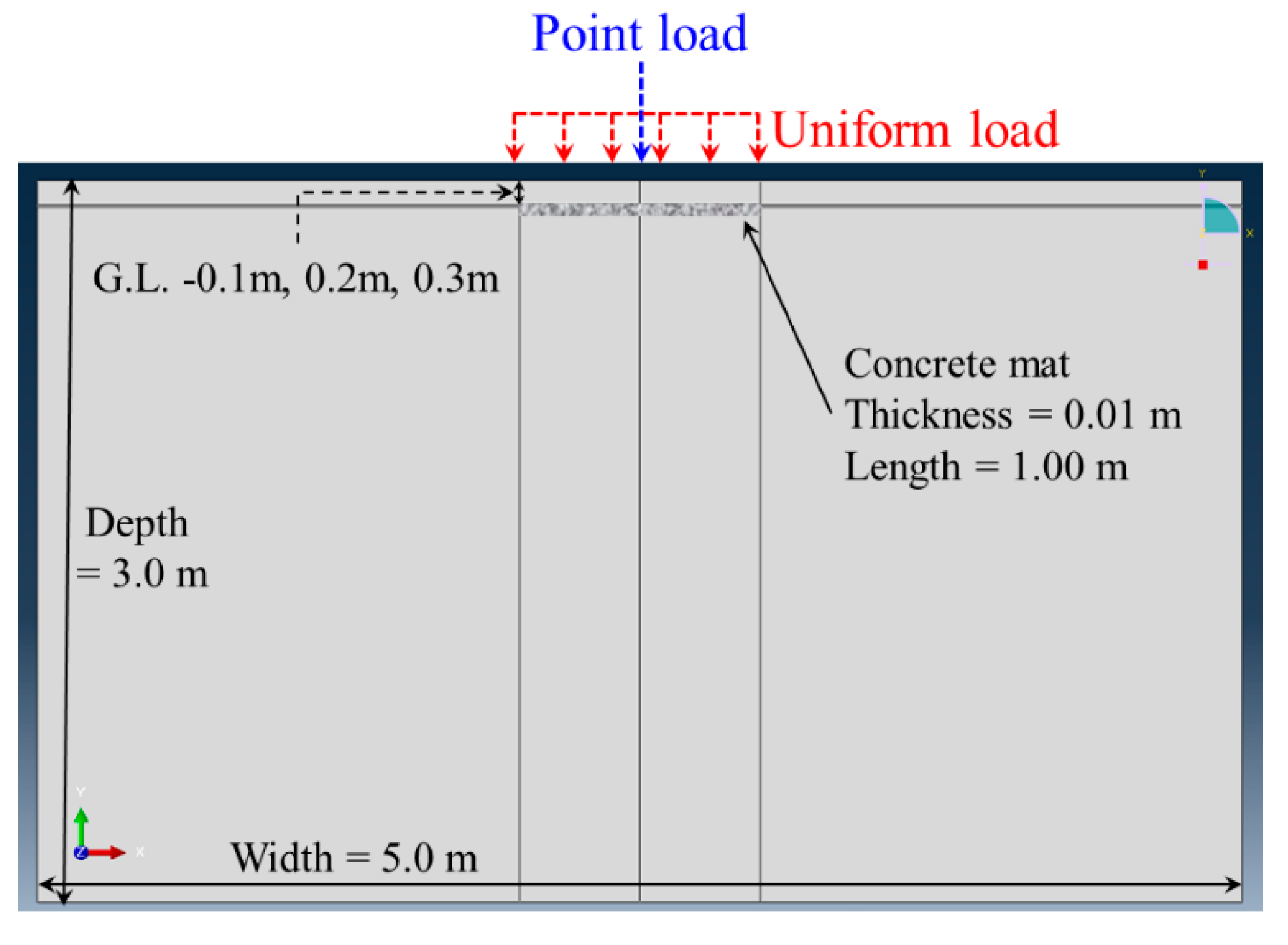 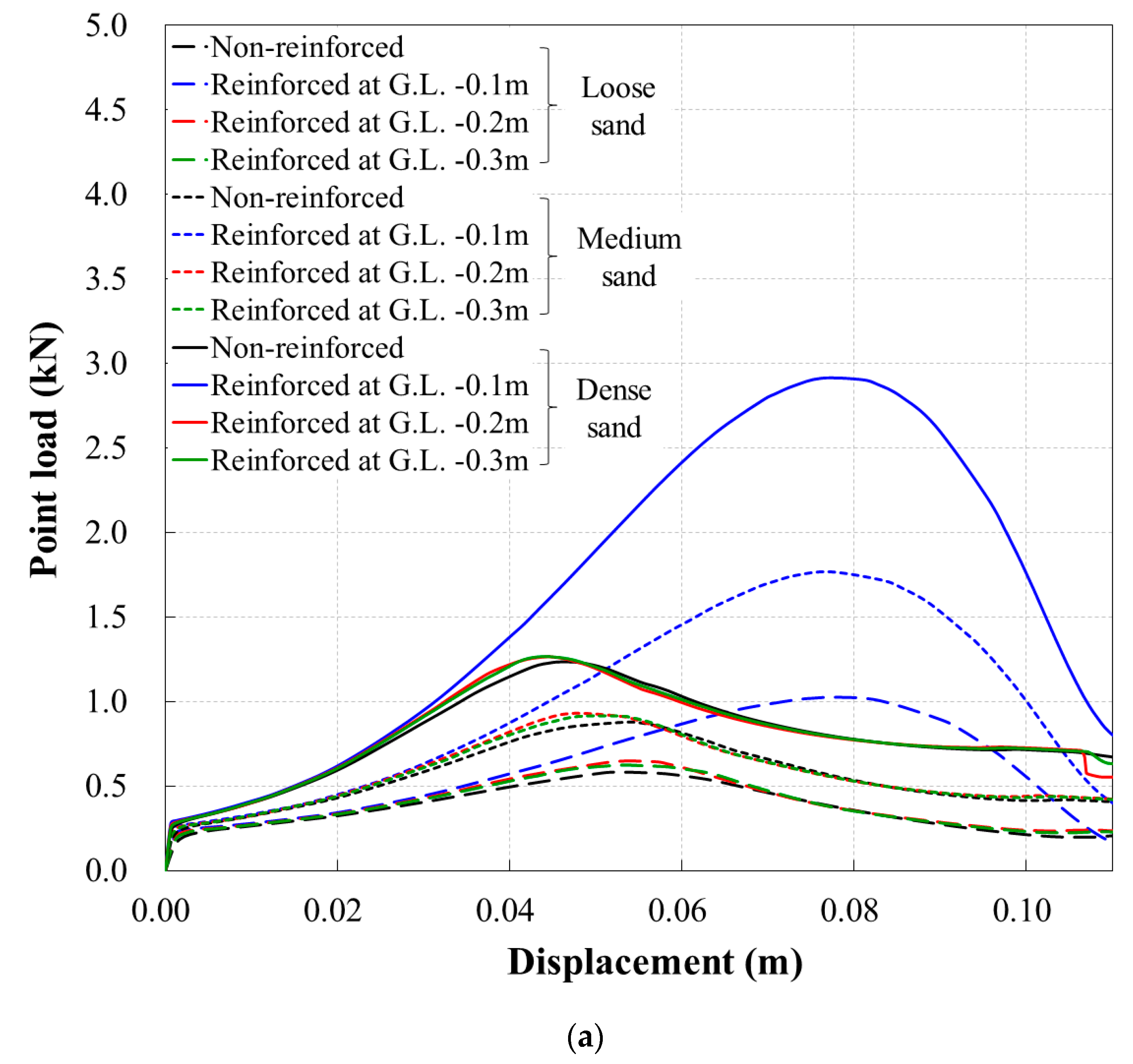 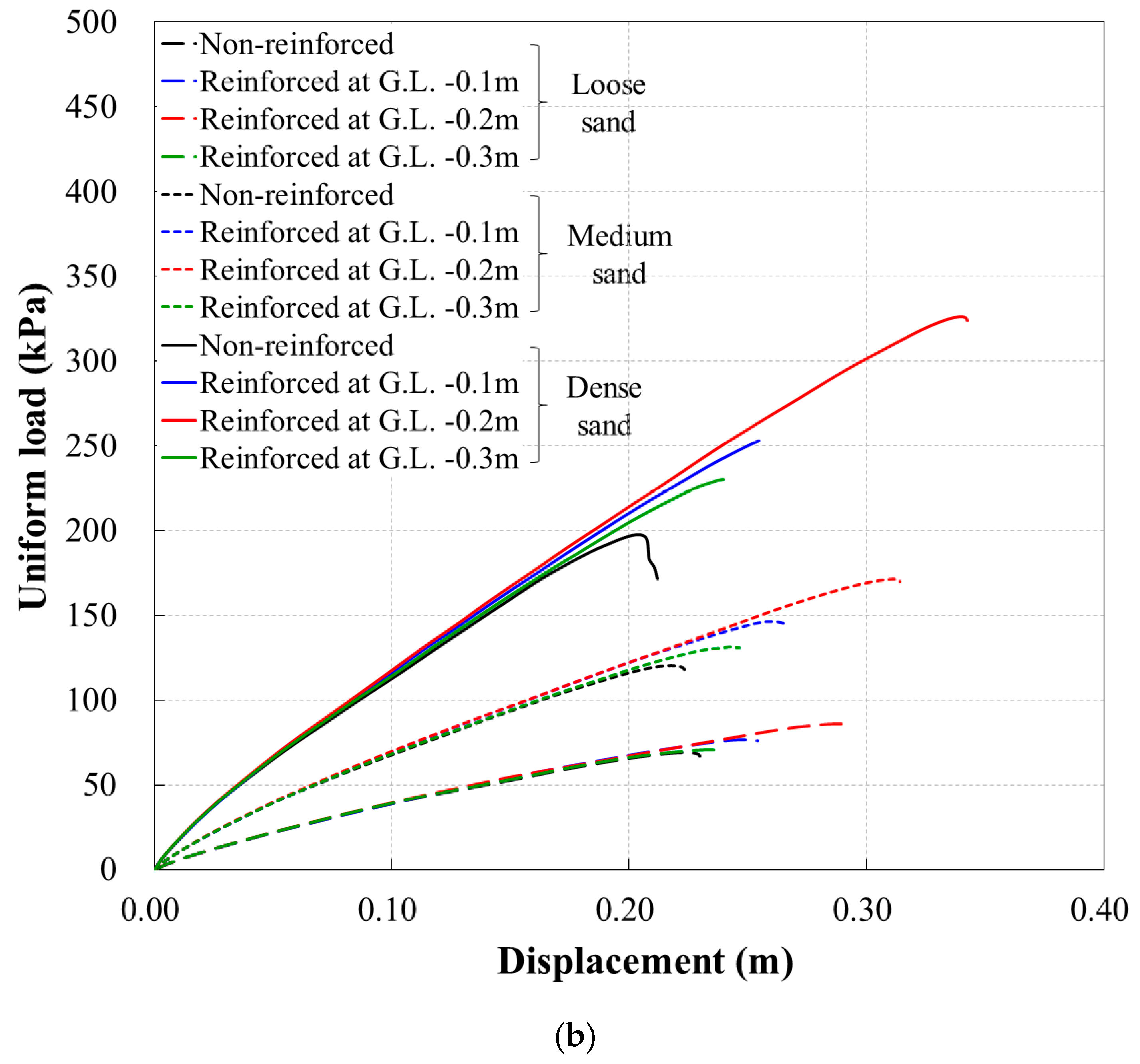 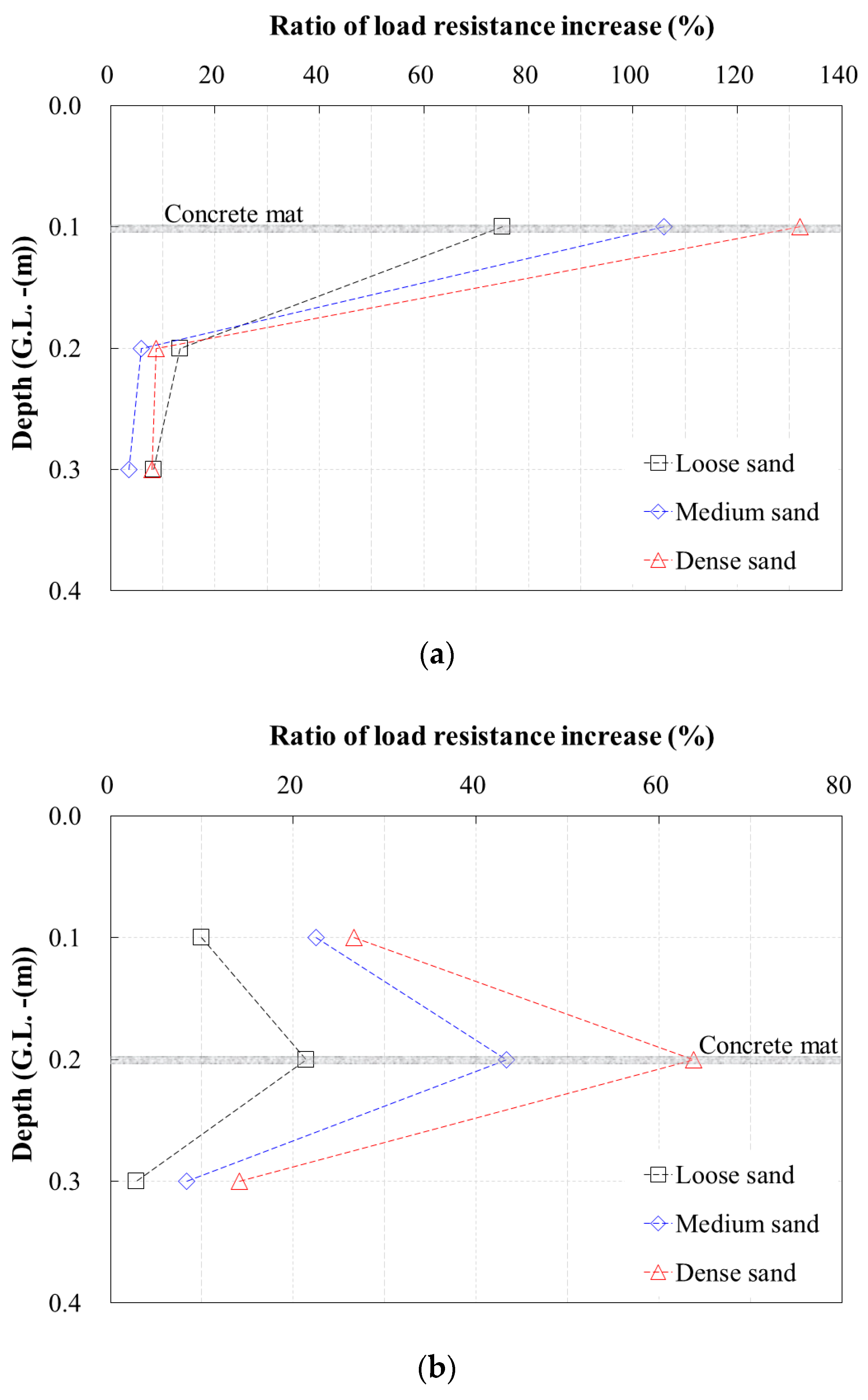 Table 3. Properties of the soil and concrete mat.
Table 3. Properties of the soil and concrete mat.
© 2020 by the authors. Licensee MDPI, Basel, Switzerland. This article is an open access article distributed under the terms and conditions of the Creative Commons Attribution (CC BY) license (http://creativecommons.org/licenses/by/4.0/).
We use cookies on our website to ensure you get the best experience. Read more about our cookies here.
Accept
We have just recently launched a new version of our website. Help us to further improve by taking part in this short 5 minute survey here. here.
Never show this again