During livestock transport the floor of the vehicle moves in a way that can disturb their balance. This can stress the animals, producing signals that are processed by the right half of their brain. This half of the brain controls movement of the sheep on the opposite, left side of their body. Hence we investigated whether limb movement was more pronounced on this side, providing evidence of stress responses. We found that sheep limb movements were increased in their left hindlimb and right forelimb during balance correction when the floor movements were most unpredictable. This may be explained by sheep using their back right leg as a pivot. We further tested which side sheep lie down on from internet pictures and found a preference for left side lying. We conclude that sheep balance correction shows evidence of a preferred use of limbs, which suggests that sheep are stressed by floor motion.

Unpredictable floor motions during transport disturbs animals’ balance, requiring stepping to move the centre of gravity in the direction of body movement. When repeated regularly, this may be stressful, requiring involvement of the right brain hemisphere, hence we investigated the existence of behavioral laterality in sheep during prolonged floor motions. Six sheep were restrained in pairs on a programmable rocking platform, in which they were unable to turn around. They were exposed to three continuous rocking motion treatments (roll, pitch or both) in a regular or irregular pattern for 1 h periods in a changeover design. Right forelimb and left hindlimb diagonal stepping was more frequent in response to the motion treatment of irregular roll and pitch, which previous research has suggested to be the most stressful from heart rate measurements. An overall strategy to maintain balance appeared to be the use of the right hindlimb as a stabilizer, which was repositioned least often of all limbs until towards the end of the hour of experimental treatment. Of each tested pair, sheep restrained on the left side of the rocking floor stepped significantly often than its partner restrained on the right side, and we postulate the existence of visuomotor lateralization as left restrained sheep were unable to view their partner within the field of view of their left eye. We also investigated which side sheep lie down on, which if left lateralized could explain our observed bipedal diagonal control of sheep balance under stress. From the observation of 412 web-based images of sheep, there was an overall left-sided laterality to their lying, as has been observed in cattle. We conclude that stepping activity in sheep in response to a motion stressor is lateralized, providing evidence that floor motion experienced in transport may induce stress responses. View Full-Text
Keywords: behavior; laterality; locomotion; motion; sheep; transport behavior; laterality; locomotion; motion; sheep; transport
►▼ Show Figures 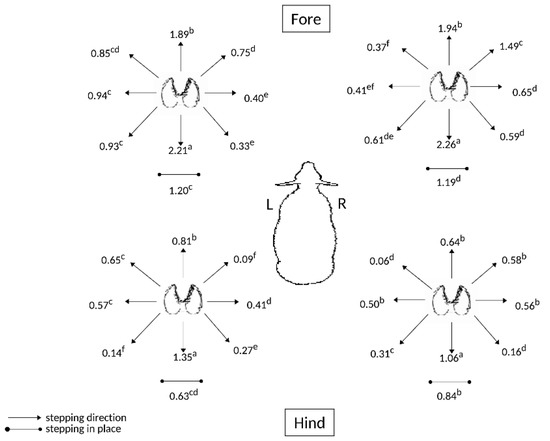