Prevalence of Pathogens Related to Bovine Respiratory Disease Before and After Transportation in Beef Steers: Preliminary Results
Previous Article in Special Issue

Endothermic animals use various physiological and behavioural mechanisms to control body heat production and loss so that their internal body temperature remains constant, and this is considered “thermoregulation” [1]. The ability for an individual to thermoregulate allows them to cope with a range of environmental temperatures (i.e., extreme heat or cold), which could otherwise have detrimental effects on an animal’s well-being [2,3]. Specifically, “behavioural” thermoregulation depends on the spatial arrangement and availability of microclimates in an individual’s environment; most species can exploit cooler environments during hot weather and warmer environments during cold weather [4]. A suitable thermal landscape in wildlife enclosures is essential for captive management and animal welfare [5,6]. Zoo enclosures may have heating and cooling systems to provide suitable surrounding temperatures for animals [7], however it is often difficult to monitor body temperature of animals without handling. Recent technology advancements have allowed for thermal imaging to be a viable technique for measuring body temperature from a distance. An advantage of using thermal imaging is its high resolution, ability to contrast variation in body temperature, and non-invasive nature [8,9,10]. Thermal imaging has been used in veterinary medicine to detect leg and hoof problems using body temperature variation in racehorses, demonstrate high body temperature in livestock during transportation, and measure rapid changes in skin temperature in response to acute stressors [11,12]. To our knowledge, there is no published report on thermal imaging of native Australian wildlife in a Zoo setting.
Koalas are an arboreal folivore native to Australia [13] that use thermoregulation as a key survival mechanism to cope with subtle environmental changes, such as heat waves [3,4]. Koalas have an average body temperature between 35.5 °C and 36.8 °C and “behavioural” thermoregulation is important for maintenance of core body temperature [4,5]. Such behavioural thermoregulation in koalas includes panting to cool themselves, curling up into a ball to trap internal heat when cold, and the use of tree trunks as cold or warm substrates to regulate body temperature dependent on environmental conditions [4,5]. The selection of a perch by koalas has been demonstrated to be influenced by temperature, food availability, and time of day [4]. Interestingly, in response to temperature and “behavioural” thermoregulation, tree structure is an important consideration for koalas when selecting a perch, irrespective of food preference, because dense tree canopies provide a cool microclimate during hot weather [3,4,5]. Therefore, in koalas alone it is apparent that unsuitable microclimates and perch substrates in captivity can create difficulties to mimic natural thermoregulation and pose as potential stressors [14].
This preliminary study sought to record the body temperature of koalas using a thermal imaging camera to assess its applicability in a Zoo setting and specifically determine the most reliable body feature for taking body temperature readings. The application of this technology will help zookeepers to better understand the thermal preferences of koalas in relation to captive environments.

All thermal images were taken using the FLIR530TM Thermal Imaging Camera. Thermal images of each of the koalas were taken every 30 min between 8:00 and 17:00 (9 h a day) over three consecutive days in May 2018 for a total of 171 images (57 images per individual). Each image taken was focused and centred to the koala to incorporate as much of the body features within the image (Figure 1). Each image was taken within 1 m distance to the koala.

All images were analysed using FLIR Tools version 5.13 software for extraction of thermal metrics. The FLIR Tools software enabled us to measure the temperature of specifically selected body features of a koala by simply defining them within each image (Figure 1). We were most interested in measuring the temperature of the eyes, ears, paws, abdomen, and back.
The coefficient of variation (the ratio of the standard deviation to the mean) was calculated for each body feature (eyes, ears, paws, abdomen, or back) to determine which was the most consistent for measuring body temperature using a thermal imaging camera, i.e., the body features with the least amount of variation.

Being able to identify a reliable body feature to measure the body temperature of an animal with a thermal camera introduces a non-invasive method for measuring animal welfare. Focusing on one body part reduces outliers and abnormally high readings (Birri’s max temp = 46.5 °C) that are also picked up by the thermal camera. The camera reads reflections and shadows that are present in the images therefore the camera is not reading the true temperature of the koala. This limitation has been found in similar studies, such as [10], where the solar radiation produced erratic temperature readings when reflected off other objects in the enclosure. This can been seen in the readings of the back and feet as there is such a high variation between the temperatures during the day for some koalas compared to another koalas in the same area. This variance is reflected in the CV%. The back and feet have the least consistent readings as koalas tend to sit in positions on the side of the trees or in branches which allows the sun to reflect off their backs. The nose of the koala was difficult to image because of the variability in positioning of the koala on the perches, hence it was not used in the image analysis. The camera was also picking up reflections off the artificial tree in the enclosure. Other limitations that are expressed in this study are distance from the thermal camera to the subject, as well as plants and other objects obstructing the analysed object.

Thank you to James Vandersteen who carried out the data analysis under Edward Narayan’s supervision. We thank the staff at the Wildlife Sydney Zoo for their valuable support and providing access to the study site. 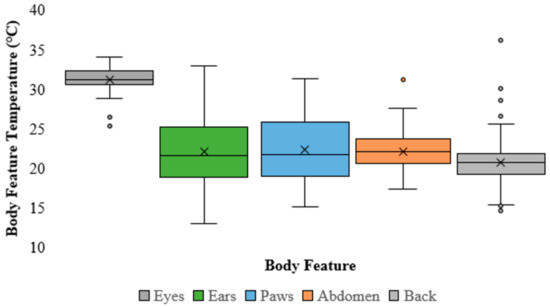 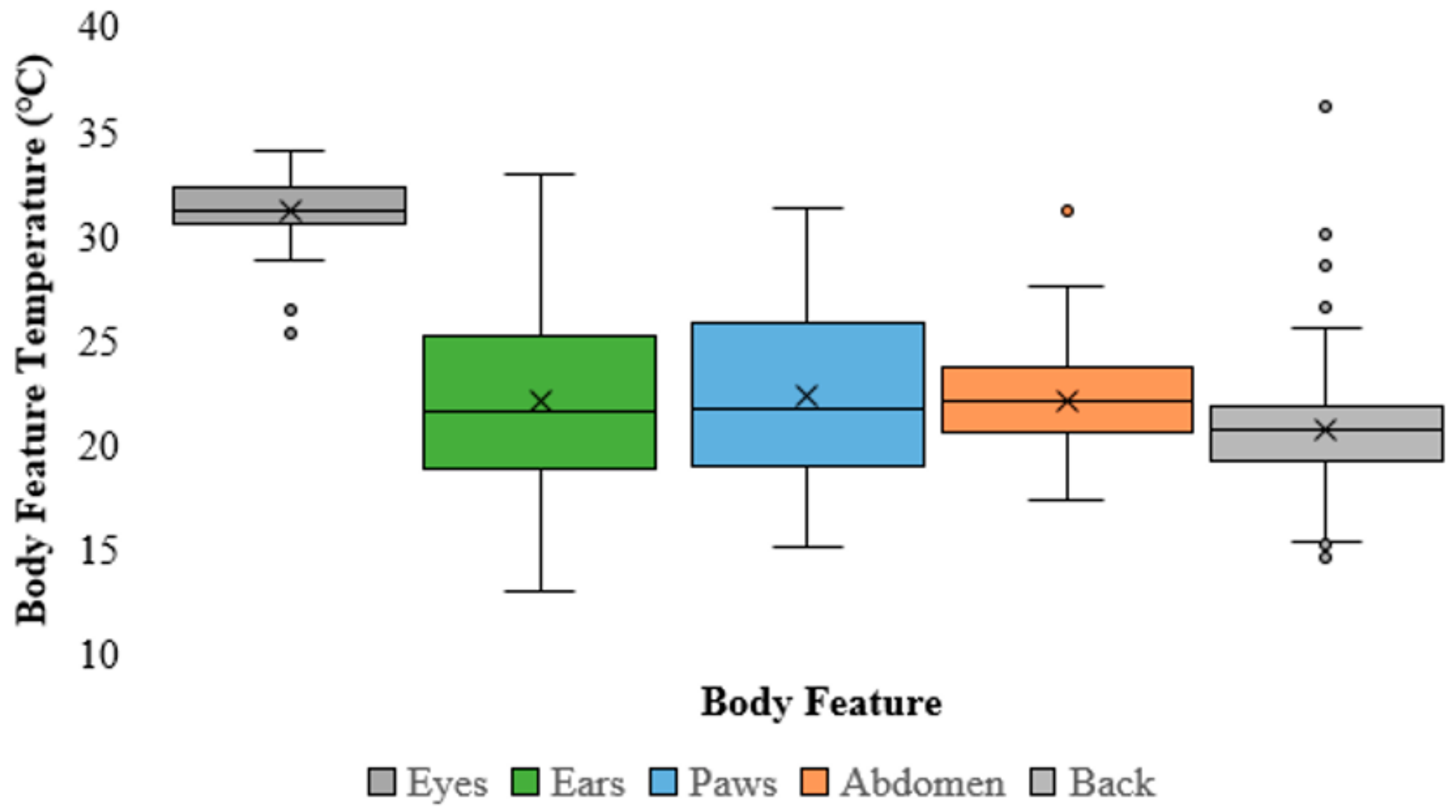