Evaluation of Collagen and Elastin Content in Skin of Multiparous Minks Receiving Feed Contaminated with Deoxynivalenol (DON, vomitoxin) with or without Bentonite Supplementation
Next Article in Special Issue

The increase in altitude will bring about a complex change in a series of elements of nature, which will have a profound impact on human production and life. Studying domestic animals in the native environment is an effective way to explore the impact of high altitude on human life, and at the same time is conducive to the development of local animal husbandry. Here, we found that the hypoxic adaptation of Tibetan pigs may be related to higher levels of VEGFA, HIF1 and myoglobin expression. The higher aerobic oxidative capacity of Tibetan pigs is beneficial to improve energy utilization, and the higher UFA content of Tibetan pigs is beneficial to cold resistance. In addition, Tibetan pigs have higher levels of BCAA and Myh2 expression, which serve to relieve muscle fatigue and improve endurance. In addition, it was observed that there are obvious differences in carcass and meat quality traits of different altitudes pigs. Taken together, our findings illustrate the adaptability of Tibetan pigs to high altitude from various perspectives and compare carcass and meat quality traits of three pig breeds.

The carcass and meat quality traits of pig breeds living at three different altitudes (Yorkshire pigs, YP: 500m; Qingyu Pigs, QYP: 1500m; Tibetan pigs, TP: 2500m) were compared. It was observed that there are obvious differences in pig breeds with respect to performance parameters. Specifically, YP had the best carcass traits, showing high slaughter rates and leanest meat. Conversely, QYP had the highest back fat thickness and intramuscular fat (IMF) content. For the high-altitude breed TP, the animals exhibited low L* and high a* values. The genotypes contributing to the observed phenotypes were supported by a PCR analysis. The glycolytic genes expression (HK, PFK, PK) were highest in YP, whereas expression of genes related to adipogenesis (C/EBPα, FABP4, SCD1) were highest in QYP. As expected, genes associated with angiogenesis and hypoxia (HIF1a, VEGFA) were expressed at the highest levels in TP. The composition and proportion of amino and fatty acids in pig muscles at the three altitudes examined also varied substantially. Among the breeds, TP had the highest proportion of umami amino acids, whereas QYP had the highest proportion of sweet amino acids. However, TP also exhibited the highest proportion of essential fatty acids and the lowest proportion of n6:n3. This study explains the high-altitude adaptive evolution and the formation of meat quality differences in different altitude pigs from various angles and provides a reference for local pork food processing and genetic improvement of local pigs. View Full-Text
Keywords: altitude; carcass quality; meat quality; amino acid; fatty acid altitude; carcass quality; meat quality; amino acid; fatty acid
►▼ Show Figures 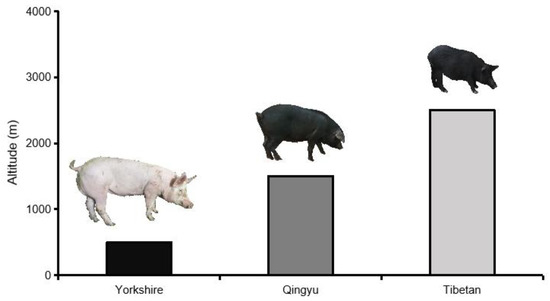