The broadening of the agriculture domain around the world is causing excessive utilization of herbicides worldwide. The usage of herbicide Diuron towards the non-targeted aquatic organism may not directly cause death, but small sublethal doses of long-term exposure can cause detrimental consequences not only towards the individual itself but also towards the sustainability of the whole population of the species. The impaired reproduction of the gonadal staging and germ cells maturity can cause the overall reduction in adult survival and eventually lower the population density of the ecosystem.

The expeditious augmentation of the agriculture industry is leaving a significant negative impact on aquatic ecosystems. However, the awareness of the impacts of herbicide Diuron toxicities on the non-targeted aquatic organism, especially fish is still lacking. Javanese medaka, a new model fish species were exposed under sublethal levels and the long-term effects on gonads were investigated via histological studies. A total of 210 sexually mature fish were exposed to Diuron at seven different concentrations; control, solvent control, 1, 50, 100, 500, and 1000 μg/L for 21 days. In this study, Diuron caused histopathological alterations in gonads (ovary and testis) of Javanese medaka (Oryzias javanicus) by decreasing in gonadal staging and maturity of germ cells in oogenesis and spermatogenesis of female and male Javanese medaka. The results obtained in this study had proven our hypothesis that long-term exposure of herbicide Diuron can cause alterations in the gonadal histology of the adults of Javanese medaka. View Full-Text
Keywords: histology; ovary; testis; Diuron; Javanese medaka histology; ovary; testis; Diuron; Javanese medaka
►▼ Show Figures 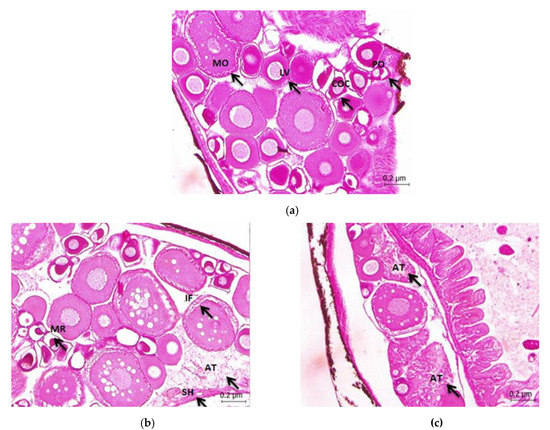