Kombucha fermentation is initiated by transferring a solid-phase cellulosic pellicle into sweetened tea and allowing the microbes that it contains to initiate the fermentation. This pellicle, commonly referred to as a symbiotic culture of bacteria and yeast (SCOBY), floats to the surface of the fermenting tea and represents an interphase environment, where embedded microbes gain access to oxygen as well as nutrients in the tea. To date, various yeast and bacteria have been reported to exist within the SCOBY, with little consensus as to which species are essential and which are incidental to Kombucha production. In this study, we used high-throughput sequencing approaches to evaluate spatial homogeneity within a single commercial SCOBY and taxonomic diversity across a large number (n = 103) of SCOBY used by Kombucha brewers, predominantly in North America. Our results show that the most prevalent and abundant SCOBY taxa were the yeast genus Brettanomyces and the bacterial genus Komagataeibacter, through careful sampling of upper and lower SCOBY layers. This sampling procedure is critical to avoid over-representation of lactic acid bacteria. K-means clustering was used on metabarcoding data of all 103 SCOBY, delineating four SCOBY archetypes based upon differences in their microbial community structures. Fungal genera Zygosaccharomyces, Lachancea and Starmerella were identified as the major compensatory taxa for SCOBY with lower relative abundance of Brettanomyces. Interestingly, while Lactobacillacae was the major compensatory taxa where Komagataeibacter abundance was lower, phylogenic heat-tree analysis infers a possible antagonistic relationship between Starmerella and the acetic acid bacterium. Our results provide the basis for further investigation of how SCOBY archetype affects Kombucha fermentation, and fundamental studies of microbial community assembly in an interphase environment. View Full-Text
Keywords: Kombucha fermentation; acetic acid bacteria; Brettanomyces; microbiome; mycobiome; Illumina sequencing Kombucha fermentation; acetic acid bacteria; Brettanomyces; microbiome; mycobiome; Illumina sequencing
►▼ Show Figures 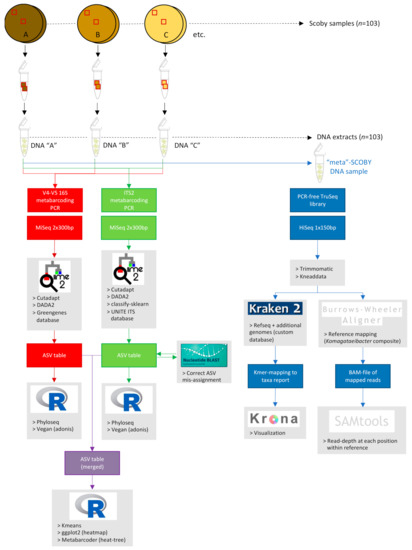