Extended-spectrum β-lactamase (ESBL)-producing Escherichia coli and methicillin-resistant Staphylococcus aureus (MRSA) represent major healthcare concerns. The role of wildlife in the epidemiology of these bacteria is unclear. The purpose of this study was to determine their prevalence in wild boars in Germany and to characterize individual isolates. A total of 375 fecal samples and 439 nasal swabs were screened for the presence of ESBL-/AmpC-E. coli and MRSA, respectively. The associations of seven demographic and anthropogenic variables with the occurrence of ESBL-/AmpC-E. coli were statistically evaluated. Collected isolates were subjected to antimicrobial susceptibility testing, molecular typing methods, and gene detection by PCR and genome sequencing. ESBL-/AmpC-E. coli were detected in 22 fecal samples (5.9%) whereas no MRSA were detected. The occurrence of ESBL-/AmpC-E. coli in wild boars was significantly and positively associated with human population density. Of the 22 E. coli, 19 were confirmed as ESBL-producers and carried genes belonging to blaCTX-M group 1 or blaSHV-12. The remaining three isolates carried the AmpC-β-lactamase gene blaCMY-2. Several isolates showed additional antimicrobial resistances. All four major phylogenetic groups were represented with group B1 being the most common. This study demonstrates that wild boars can serve as a reservoir for ESBL-/AmpC-producing and multidrug-resistant E. coli. View Full-Text
Keywords: wild boars; ESBL-producing Escherichia coli; AmpC; multidrug resistance; MRSA wild boars; ESBL-producing Escherichia coli; AmpC; multidrug resistance; MRSA
►▼ Show Figures 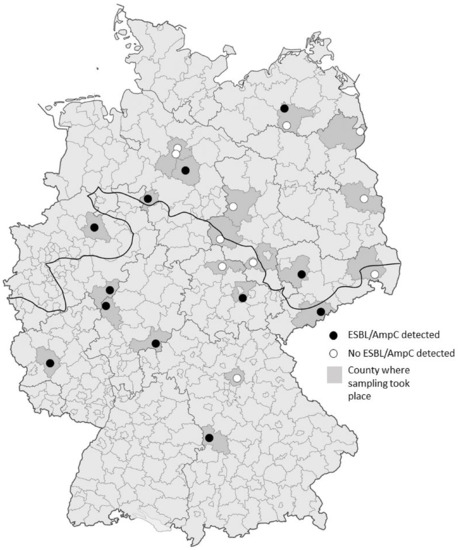