The Role of Streptococcus spp. in Bovine Mastitis
Previous Article in Journal

Streptococcus suis is a common pathogen colonising the respiratory tract of pigs. It can cause meningitis, sepsis and pneumonia leading to economic losses in the pig industry worldwide. Cyclooxygenase-2 (COX-2) and its metabolites play an important regulatory role in different biological processes like inflammation modulation and immune activation. In this report we analysed the induction of COX-2 and the production of its metabolite prostaglandin E2 (PGE2) in a porcine precision-cut lung slice (PCLS) model. Using Western blot analysis, we found a time-dependent induction of COX-2 in the infected tissue resulting in increased PGE2 levels. Immunohistological analysis revealed a strong COX-2 expression in the proximity of the bronchioles between the ciliated epithelial cells and the adjacent alveolar tissue. The morphology, location and vimentin staining suggested that these cells are subepithelial bronchial fibroblasts. Furthermore, we showed that COX-2 expression as well as PGE2 production was detected following infection with two prevalent S. suis serotypes and that the pore-forming toxin suilysin played an important role in this process. Therefore, this study provides new insights in the response of porcine lung cells to S. suis infections and serves as a basis for further studies to define the role of COX-2 and its metabolites in the inflammatory response in porcine lung tissue during infections with S. suis. View Full-Text
Keywords: Streptococcus suis; COX-2; cyclooxygenase; inflammation; lung infection; precision-cut lung slices Streptococcus suis; COX-2; cyclooxygenase; inflammation; lung infection; precision-cut lung slices
►▼ Show Figures 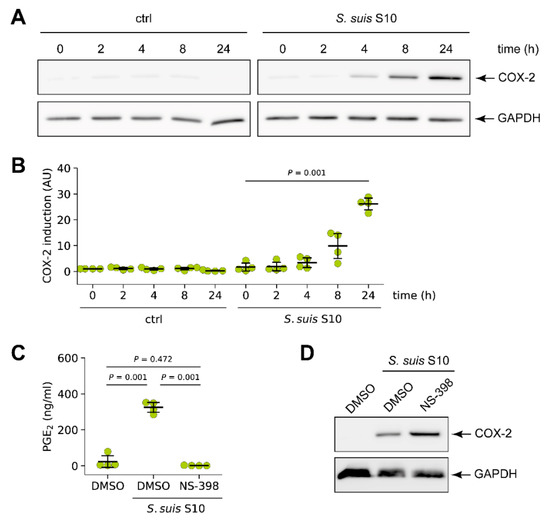