Eukaryotic and Prokaryotic Microbiota Interactions
Next Article in Special Issue

American Crows as Carriers of Extra Intestinal Pathogenic E. coli and Avian Pathogenic-Like E. coli and Their Potential Impact on a Constructed Wetland

Salmonella infection can pose serious health issues, especially to children, elders or immunosuppressed humans. Wild populations of reptiles can reach Salmonella prevalence of up to 100% and the direct or indirect transmission from reptiles to humans have been extensively reported. Fernando de Noronha (FN) is an inhabited oceanic archipelago in the northeast coast of Brazil, with an economy based on tourism. The tegu (Salvator merianae) is the largest lizard native to South America and was introduced to the archipelago in the early 20th century. This study determines the prevalence, serotypes, antimicrobial resistance, and molecular epidemiology of Salmonella enterica in the tegu population from FN archipelago. Results show that S. enterica is widely distributed in the FN tegu population, with 43.8% prevalence. The bacteria were isolated from 70.5% of the sampled sites and a total of 15 serotypes were detected in 98 S. enterica isolates. Strains were further classified into 31 genotypes. Recaptured animals presented distinct genotypes in each season, demonstrating a seasonal strain turnover. Most S. enterica isolates from FN tegus presented low antimicrobial resistance. This is possibly due to geographical isolation of the island population, hampering contact with strains from livestock from the continent, where antimicrobial resistance is common. View Full-Text
Keywords: island; genotyping; one health; reservoir; Salmonella enterica; Salvator merianae island; genotyping; one health; reservoir; Salmonella enterica; Salvator merianae
►▼ Show Figures 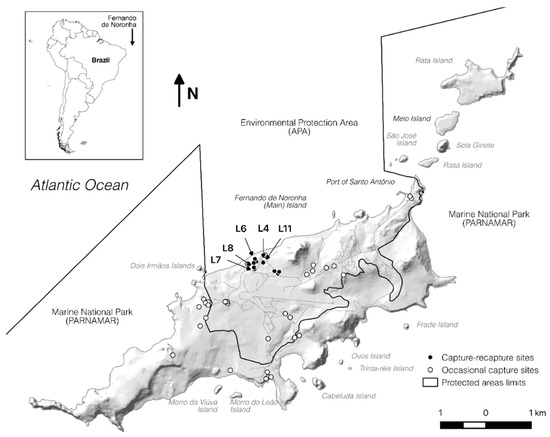