Analytical Performances of the Panther Fusion System for the Detection of Respiratory Viruses in the French National Reference Centre of Lyon, France
Next Article in Special Issue

Role of the Gut Microbiota in the Pathophysiology of Autism Spectrum Disorder: Clinical and Preclinical Evidence
Previous Article in Special Issue

Thermal stress drives the bleaching of reef corals, during which the endosymbiotic relationship between Symbiodiniaceae microalgae and the host breaks down. The endosymbiont communities are known to shift in response to environmental disturbances, but how they respond within and between colonies during and following bleaching events remains unclear. In 2016, a major global-scale bleaching event hit countless tropical reefs. Here, we investigate the relative abundances of Cladocopium LaJeunesse & H.J.Jeong, 2018 and Durusdinium LaJeunesse, 2018 within and among Pachyseris speciosa colonies in equatorial Singapore that are known to host both these Symbiodiniaceae clades. Bleached and unbleached tissues from bleaching colonies, as well as healthy colonies, during and following the bleaching event were sampled and analyzed for comparison. The nuclear ribosomal internal transcribed spacer (ITS) regions were separately amplified and quantified using a SYBR Green-based quantitative polymerase chain reaction (qPCR) method and Illumina high-throughput sequencing. We found Cladocopium to be highly abundant relative to Durusdinium. The relative abundance of Durusdinium, known to be thermally tolerant, was highest in post-bleaching healthy colonies, while bleached and unbleached tissues from bleaching colonies as well as tissue from healthy colonies during the event had depressed proportions of Durusdinium. Given the importance of Durusdinium for thermal tolerance and stress response, it is surprising that bleached tissue showed limited change over healthy tissue during the bleaching event. Moreover, colonies were invariably dominated by Cladocopium during bleaching, but a minority of colonies were Durusdinium-dominant during non-bleaching times. The detailed characterization of Symbiodiniaceae in specific colonies during stress and recovery will provide insights into this crucial symbiosis, with implications for their responses during major bleaching events. View Full-Text
Keywords: coral reef; internal transcribed spacer; Pachyseris speciosa; qPCR; Scleractinia; Southeast Asia; Symbiodiniaceae coral reef; internal transcribed spacer; Pachyseris speciosa; qPCR; Scleractinia; Southeast Asia; Symbiodiniaceae
►▼ Show Figures 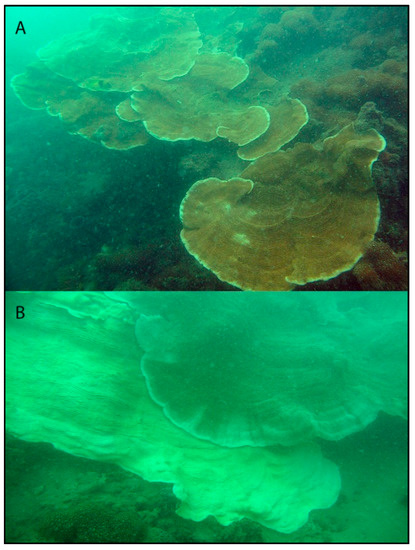