The ability of corals to withstand changes in their surroundings is a critical survival mechanism for coping with environmental stress. While many studies have examined responses of the coral holobiont to stressful conditions, its capacity to reverse responses and recover when the stressor is removed is not well-understood. In this study, we investigated among-colony responses of Pocillopora acuta from two sites with differing distance to the mainland (Kusu (closer to the mainland) and Raffles Lighthouse (further from the mainland)) to heat stress through differential expression analysis of target genes and quantification of photophysiological metrics. We then examined how these attributes were regulated after the stressor was removed to assess the recovery potential of P. acuta. The fragments that were subjected to heat stress (2 °C above ambient levels) generally exhibited significant reduction in their endosymbiont densities, but the extent of recovery following stress removal varied depending on natal site and colony. There were minimal changes in chl a concentration and maximum quantum yield (Fv/Fm, the proportion of variable fluorescence (Fv) to maximum fluorescence (Fm)) in heat-stressed corals, suggesting that the algal endosymbionts’ Photosystem II was not severely compromised. Significant changes in gene expression levels of selected genes of interest (GOI) were observed following heat exposure and stress removal among sites and colonies, including Actin, calcium/calmodulin-dependent protein kinase type IV (Camk4), kinesin-like protein (KIF9), and small heat shock protein 16.1 (Hsp16.1). The most responsive GOIs were Actin, a major component of the cytoskeleton, and the adaptive immune-related Camk4 which both showed significant reduction following heat exposure and subsequent upregulation during the recovery phase. Our findings clearly demonstrate specific responses of P. acuta in both photophysiological attributes and gene expression levels, suggesting differential capacity of P. acuta corals to tolerate heat stress depending on the colony, so that certain colonies may be more resilient than others. View Full-Text
Keywords: adaptive; immune response; heat; reversible phenotypic response; RT-qPCR adaptive; immune response; heat; reversible phenotypic response; RT-qPCR
►▼ Show Figures 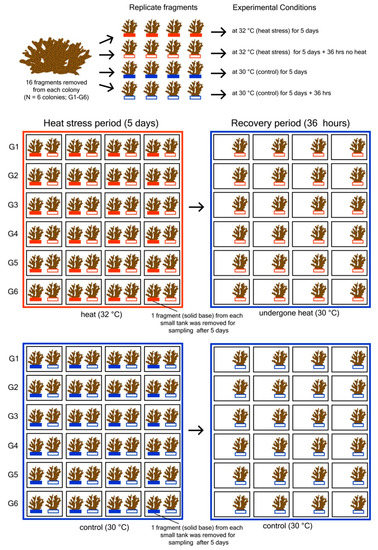