Toward a Symbiotic Perspective on Public Health: Recognizing the Ambivalence of Microbes in the Anthropocene
Previous Article in Journal

Drosophila Sexual Attractiveness in Older Males Is Mediated by Their Microbiota

The recognition of the microbiota complexity and their role in the evolution of their host is leading to the popularization of the holobiont concept. However, the coral holobiont (host and its microbiota) is still enigmatic and unclear. Here, we explore the complex relations between different holobiont members of a mesophotic coral Euphyllia paradivisa. We subjected two lines of the coral—with photosymbionts, and without photosymbionts (apo-symbiotic)—to increasing temperatures and to antibiotics. The different symbiotic states were characterized using transcriptomics, microbiology and physiology techniques. The bacterial community’s composition is dominated by bacteroidetes, alphaproteobacteria, and gammaproteobacteria, but is dependent upon the symbiont state, colony, temperature treatment, and antibiotic exposure. Overall, the most important parameter determining the response was whether the coral was a symbiont/apo-symbiotic, while the colony and bacterial composition were secondary factors. Enrichment Gene Ontology analysis of coral host’s differentially expressed genes demonstrated the cellular differences between symbiotic and apo-symbiotic samples. Our results demonstrate the significance of each component of the holobiont consortium and imply a coherent link between them, which dramatically impacts the molecular and cellular processes of the coral host, which possibly affect its fitness, particularly under environmental stress. View Full-Text
Keywords: holobiont; heat stress; algal symbiont; coral; Euphyllia paradivisa; apo-symbiont; microbial communities holobiont; heat stress; algal symbiont; coral; Euphyllia paradivisa; apo-symbiont; microbial communities
►▼ Show Figures 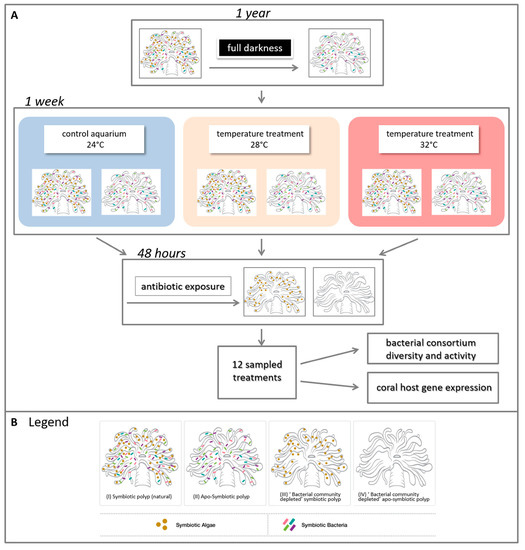