Prospective trials of anti-mycobacterial antibiotic therapy (AMAT) have proven efficacious in Crohn’s disease (CD) but use as first-line treatment in CD has not been evaluated. This paper reports the outcomes of patients with CD treated with first-line AMAT. This paper consists of a case series of treatment-naïve CD patients who received AMAT as first-line treatment between 2007 and 2014 at a single center. AMAT treatment consisted of rifabutin, clofazimine and clarithromycin, plus either ciprofloxacin, metronidazole or ethambutol. Symptoms, inflammatory blood markers, colonoscopy and histology results, in addition to, the Crohn’s Disease Activity Index (CDAI) were tabulated from patients’ clinical records, and descriptive statistics were conducted. A Wilcoxon signed-rank test assessed the difference in CDAI scores before and while on AMAT. The statistical significance was set at 5%. Clinical remission (CDAI < 150) with rapid improvement in clinical symptoms and inflammatory markers was seen in all eight patients receiving AMAT as sole therapy by 6 weeks. In all eight patients, the median CDAI score decreased significantly, from 289 prior to treatment to 62 at the 12-month follow-up (p < 0.001). Follow-up colonoscopies showed healing of CD ulcers, no visible mucosal inflammation, restoration of normal vascular patterns and complete mucosal healing on histology samples. AMAT as first-line therapy demonstrated a rapid improvement of Crohn’s disease (not previously seen when used as second-line therapy). View Full-Text
Keywords: anti-bacterial agents; Crohn’s disease; inflammatory bowel disease; mucosal healing; Mycobacterium avium subspecies paratuberculosis anti-bacterial agents; Crohn’s disease; inflammatory bowel disease; mucosal healing; Mycobacterium avium subspecies paratuberculosis
►▼ Show Figures 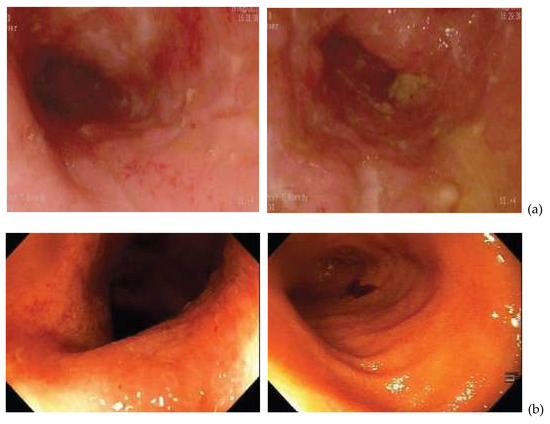