Impact of Fermentable Protein, by Feeding High Protein Diets, on Microbial Composition, Microbial Catabolic Activity, Gut Health and beyond in Pigs
Next Article in Special Issue

We report on the isolation of the previously-uncultured Neocallimastigomycota SK4 lineage, by two independent research groups, from a wild aoudad sheep rumen sample (Texas, USA) and an alpaca fecal sample (Baden-Württemberg, Germany). Isolates from both locations showed near-identical morphological and microscopic features, forming medium-sized (2–5 mm) white filamentous colonies with a white center of sporangia, on agar roll tubes and a heavy biofilm in liquid media. Microscopic analysis revealed monocentric thalli, and spherical polyflagellated zoospores with 7–20 flagella. Zoospore release occurred through an apical pore as well as by sporangial wall rupturing, a duality that is unique amongst described anaerobic gut fungal strains. Isolates were capable of growing on a wide range of mono-, oligo-, and polysaccharide substrates as the sole carbon source. Phylogenetic assessment based on the D1–D2 28S large rRNA gene subunit (D1–D2 LSU) and internal transcribed spacer-1 (ITS-1) regions demonstrated high sequence identity (minimum identity of 99.07% and 96.96%, respectively) between all isolates; but low sequence identity (92.4% and 86.7%, respectively) to their closest cultured relatives. D1–D2 LSU phylogenetic trees grouped the isolates as a new monophyletic clade within the Orpinomyces–Neocallimastix–Pecoramyces–Feramyces–Ghazallamyces supragenus group. D1–D2 LSU and ITS-1 sequences recovered from the obtained isolates were either identical or displayed extremely high sequence similarity to sequences recovered from the same aoudad sheep sample on which isolation was conducted, as well as several sequences recovered from domestic sheep and few other herbivores. Interestingly, members of the SK4 clade seem to be encountered preferably in animals grazing on summer pasture. We hence propose accommodating these novel isolates in a new genus, Aestipascuomyces (derived from the Latin word for “summer pasture”), and a new species, A. dupliciliberans. The type strain is Aestipascuomycesdupliciliberans strain R4. View Full-Text
Keywords: anaerobic gut fungi; sequence-guided isolation; Neocallimastigomycota SK4 lineage anaerobic gut fungi; sequence-guided isolation; Neocallimastigomycota SK4 lineage
►▼ Show Figures 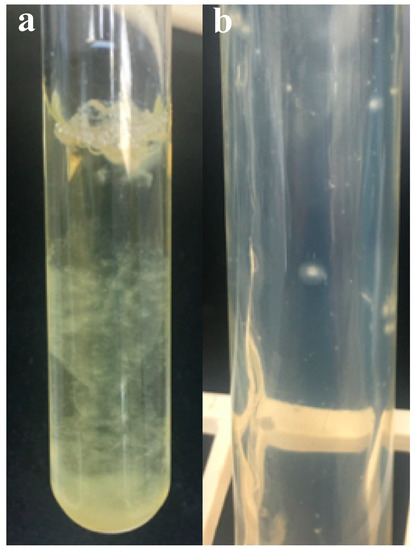