Isolation, Screening, and Characterization of Plant-Growth-Promoting Bacteria from Durum Wheat Rhizosphere to Improve N and P Nutrient Use Efficiency

:
Apoptosis and later autolysis are biological processes which take place in Saccharomyces cerevisiae during industrial fermentation processes, which involve costly and time-consuming aging periods. Therefore, the identification of potential cell death biomarkers can contribute to the creation of a long-term strategy in order to improve and accelerate the winemaking process. Here, we performed a proteomic analysis based on the detection of possible apoptosis and autolysis protein biomarkers in two industrial yeast strains commonly used in post-fermentative processes (sparkling wine secondary fermentation and biological aging) under typical sparkling wine elaboration conditions. Pressure had a negatively effect on viability for flor yeast, whereas the sparkling wine strain seems to be more adapted to these conditions. Flor yeast strain experienced an increase in content of apoptosis-related proteins, glucanases and vacuolar proteases at the first month of aging. Significant correlations between viability and apoptosis proteins were established in both yeast strains. Multivariate analysis based on the proteome of each process allowed to distinguish among samples and strains. The proteomic profile obtained in this study could provide useful information on the selection of wine strains and yeast behavior during sparkling wine elaboration. Additionally, the use of flor yeasts for sparkling wine improvement and elaboration is proposed.
Keywords:
apoptosis; autolysis; proteome; yeast; sparkling wine; CO2 overpressure

Sparkling wines’ production involves a secondary fermentation of a base wine followed by a prolonged aging period in contact with lees. Along this stage, known as “prise de mousse”, yeast cells must endure hard stress conditions such as high ethanol concentration, nutrient starvation, low pH and temperature, and CO2 overpressure (6 bars) [1]. Such stress conditions compromise and test the yeast survival, which is ideal to analyze cell death-related processes. Among different yeasts, Saccharomyces cerevisiae, due to its easy handling and tractability, has been widely used to study cell death [2,3,4].
Programmed cell death (PCD) represents a specific type of regulated cell death (RCD), which occurs in strictly physiological scenarios such as development or aging. PCD has been reported to occur with apoptotic features [3,5]. According to Fröhlich and Madeo, 2000 [6], yeast cells undergoing apoptosis display characteristic markers as DNA and mitochondria fragmentation, reactive oxygen species (ROS) accumulation or cytochrome c release. The discovery of apoptosis in yeasts has suggested that other forms of RCD might occur, such as programmed necrosis, an active regulatory mechanism taking place along yeast chronological aging [2,5]. Studies by Orozco et al. (2013) [7] observed that factors associated to apoptosis, such as the caspase Mca1p and the apoptosis-inducing factor Aif1p, play a positive role in yeast longevity during winemaking. More recently, results obtained by Duc et al. (2017) [8] indicated that yeast cell death results from its inability to trigger an appropriate stress response under some conditions of nutrient limitations.
Once yeast cells die, the yeast intracellular content is released into the wine due to the action of hydrolytic enzymes during autolysis, an irreversible lytic event associated with cell death [9,10]. This process has been reported to take place during the aging period in sparkling wines elaboration, which is essential for wines to obtain its characteristic properties [11,12]. In order to provide the expected results, yeast cells are subjected to long aging periods and low temperatures that lead to eventual autolysis [13]. While this step is crucial in the process of sparkling wine elaboration, the time restraints make it a bottleneck and consequently, choosing strains with accelerated autolysis is a desirable feature and it has become an object of study of numerous researchers [14,15,16].
One such strain that could be a candidate for this process are flor yeasts. These yeasts tend to form biofilms on the wine surface under nutrient limitation conditions (among other stresses) during biological aging in sherry wines production [17,18,19,20]. Therefore, the benefit of a cellular suicide program seems logical, since apoptosis might increase the nutrients availability for younger cells through the cell death of the older and unhealthy members from the yeast population [6]. However, while autolysis process has been evidenced under enological conditions [21], apoptosis remains unreported in flor yeast so far, although it should be noted that apoptotic factors have been observed during biofilm formation [22].
In this study, the apoptosis and autolysis-related proteome of two industrial yeast strains used commonly in post-fermentative processes (sparkling wine secondary fermentation and biological aging), was analyzed and compared in order to detect potential biomarkers under CO2 overpressure conditions (typical of sparkling wine elaboration process).

Yeast cells were previously grown in YPD medium at 21 °C for 48 h. Later, each strain was inoculated (1.5 × 106 cells/mL) separately in a pasteurized grape juice (Macabeo white grape variety with 174.9 g/L of sugar, 3.6 g/L total acidity and pH 3.4) as acclimation medium and maintained with gentle stirring (100 rpm) at 22 °C for 5 days. Once yeast cells reached high values of cell concentration (1.5 × 108), viability (97%) and ethanol (10.39% v/v), the must was properly filtered (using a sterilized pore filter of 0.45 μm) and “tirage” was carried out using standard sparkling wine bottles of 750 mL, according to INCAVI protocol.
A total of 12 bottles were used for each strain (24 in total) and filled with the fermenting mixture: a standardized commercial base wine (Macabeo and Chardonnay 6:4, 10.21% v/v, 0.3 g/L of sugar, pH 3.29, 5.4 g/L of total acidity and 0.21 g/L of volatile acidity), 22 g/L of sucrose and 1.5 × 106 cells/mL. Half of the bottles (six) were closed with a bidule (plastic lid) and a metal overcap, representing the endogenous CO2 overpressure condition (PC); and the rest of the bottles (six) were closed with a perforated bidule to allow the output of CO2, representing the non-pressure condition (NPC). Bottles under both conditions were incubated at 14 °C. Kinetics of second fermentation by both strains was performed measuring the pressure values with an internal aphrometer (Oenotilus, Station Oenotechnique de Champagne, Epernay, France). Samples of each strain were taken from three random bottles at two times during the second fermentation: At the middle, when pressure reached 3 bars; and 1 month after it, once the maximum pressure value was measured (6.5 bars). At the same time, samples from the control bottles without pressure were collected considering similar values under both conditions of sugar consumption (T1: 9.07 ± 0.26 g/L and T2: 0.3 ± 0.0 g/L) and ethanol content (T1: 10.74 ± 0.03% v/v and T2: 11.56 ± 0.04% v/v).

Viable yeast cells counting was carried out using appropriate dilutions with Ringer solution. These were then plated in Sabouraud agar medium for 48 h at 28 °C and all samples were analyzed by triplicate.

Methods described in Moreno-García et al. (2015) [24] and Ishihama et al. (2005) [25] for protein extraction and identification, and quantification were used, respectively. Yeast cells from each strain were collected separately by centrifugation and lysed using a Vibrogen Cell Mill. Proteins were extracted and separated according to their isoelectric point using the OFFGEL High Resolution kit pH 3–10 (Agilent Technologies Palo Alto, CA). These proteins were digested into peptides with trypsin and identified through mass spectrometry using a LTQ Orbitrap XL (Thermo Fisher Scientific, San José, CA, USA) coupled to a nano LC Ultimate 3000 system (Dionex, Germany).
Once proteins were identified, apoptosis and autolysis-related proteins were selected through the Gene Ontology section from the Saccharomyces genome database (SGD, http://www.yeastgenome.org/) and Uniprot (http://www.uniprot.org/) databases.

Proteins detected with score > 2 and observed peptides ≥ 2 were selected to proceed with the analysis. These parameters are provided in Table S1 for each process. Regarding the most abundant common proteins, those whose content ratio PC/NPC reached values ≥ 2 (over-represented) and ≤ 0.5 (down-represented), as well as the specific proteins of each strain, were highlighted and discussed in detail. Moreover, proteins found with the highest contents were considered as well. Among the protein group annotation, p-values as well as the FDR or False Discovery Rate for each one, were calculated by the tool “GO Term finder” from SGD database. The total of ORFs identified in S. cerevisiae (according to the SGD database) was used as a background set of genes and it was taken into account only by those genes which are translated into proteins. GO terms with p-values lower than 0.01 were highlighted. The software Statgraphics Centurion v.XVI was used to perform a multiple-sample comparison (MSC) with a confidence level of 95.0%, according to Fisher’s least significant difference (LSD) method, One-way ANOVA and Principal Component Analysis (PCA). The software STRING (version 11.0) was used to create the interaction network map. Correlation analysis was performed using the version 4.0 of the software MetaboAnalyst. Data were properly normalized (square root) and auto scaled, prior to analysis.

In this work, a proteomic analysis was carried out in order to detect possible cell death biomarkers in yeast through the study of apoptosis and autolysis proteome along the secondary fermentation in two industrial strains. This analysis was carried out in two yeast strains used in post-fermentative processes. All results considered, the presence of apoptosis and autolysis proteins could show evidences that these processes are taking place, and an effect of CO2 overpressure on the cell death-related proteome is observed. Additionally, over-represented proteins and those correlated with cell viability under pressure conditions such as Cpr3p, Esp1p, Oye2p, and Nma111p, as well as proteins detected non strain-dependent as Bgl2p, Exg1p, and Pep4p, may be proper biomarkers in order to accelerate cell death and improve yeast autolytic capacity during aging in sparkling wine elaboration. In addition, the use of multivariate statistical analysis such as PCA, showed differences in the behavior of apoptosis and autolysis proteome and allowed to group the samples according to the effect of the different factors studied: strain, time and pressure. The differentiation of the samples seems to be due to both pressure and fermentation stage effect.
From the industrial and enological point of view, the use of a flor yeast in sparkling wine production and improvement may be considered. Apart from its ethanol tolerance and flocculation ability, the fast cell death observed along the prise de mousse, its high content in glucanases and vacuolar proteases, as well as the numerous highly-represented proteins under pressure conditions, make this strain an interesting alternative within the sparkling wines field. However, further proteomic and metabolomics studies focused on the organoleptic properties of flor yeasts, genetic approaches, and electronic microscopy observations are required in order to achieve more solid conclusions. The proteomic profiles obtained in this study could be considered at the time of selecting wine yeast strains for sparkling wine production and aim to shed light on the knowledge of yeast behavior when these are in a life and death debate under enological conditions.

Kind help of the staff at the Central Research Support Service (SCAI) of the University of Cordoba with the protein analyses is gratefully acknowledged. Special mention to Minami Ogawa for the translation of the article. 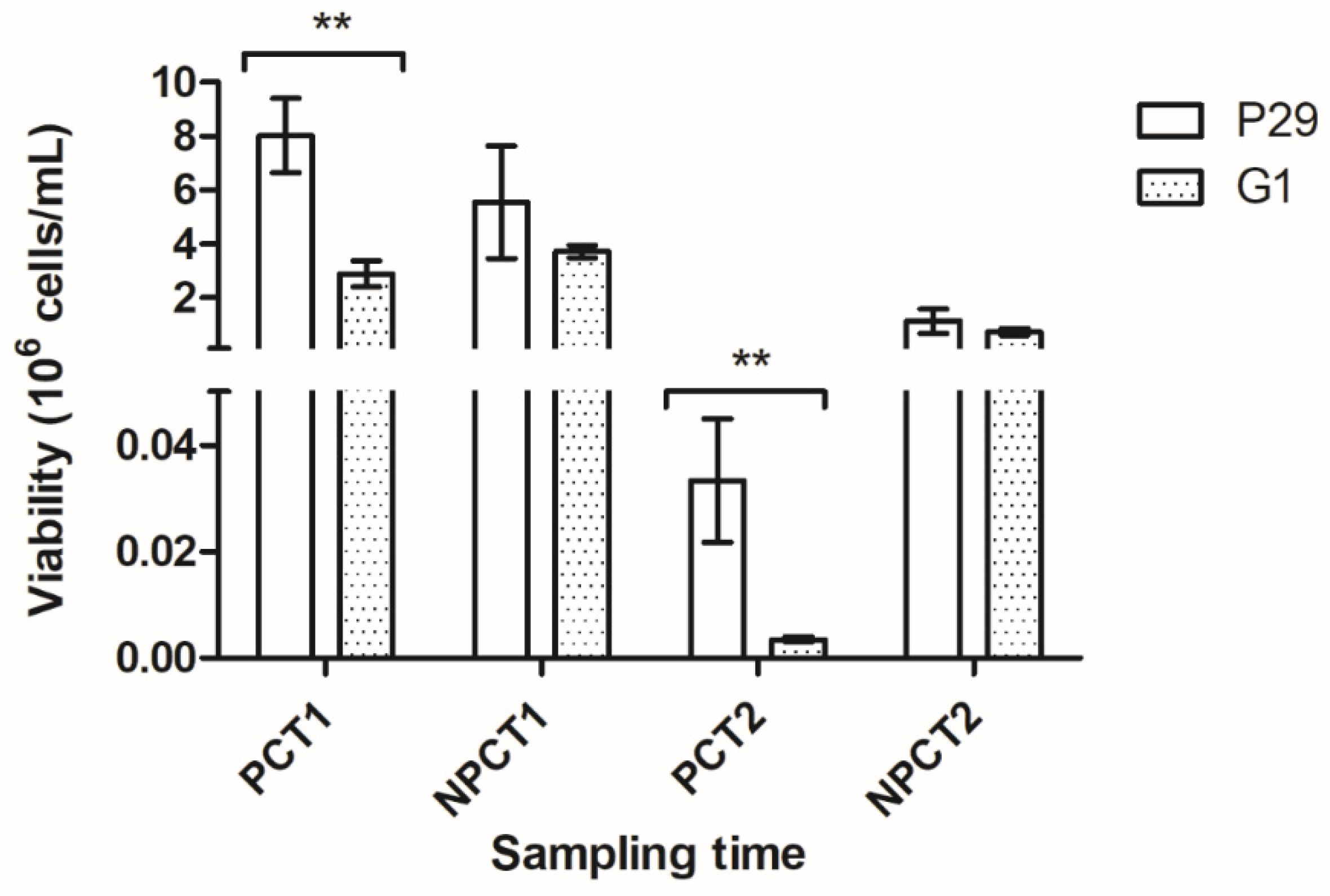 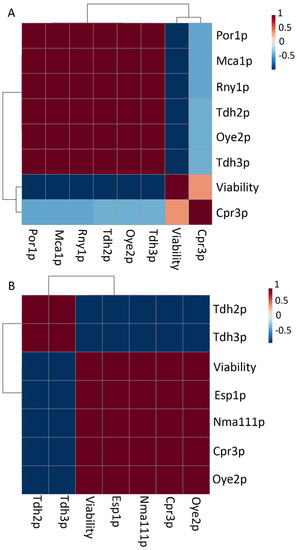 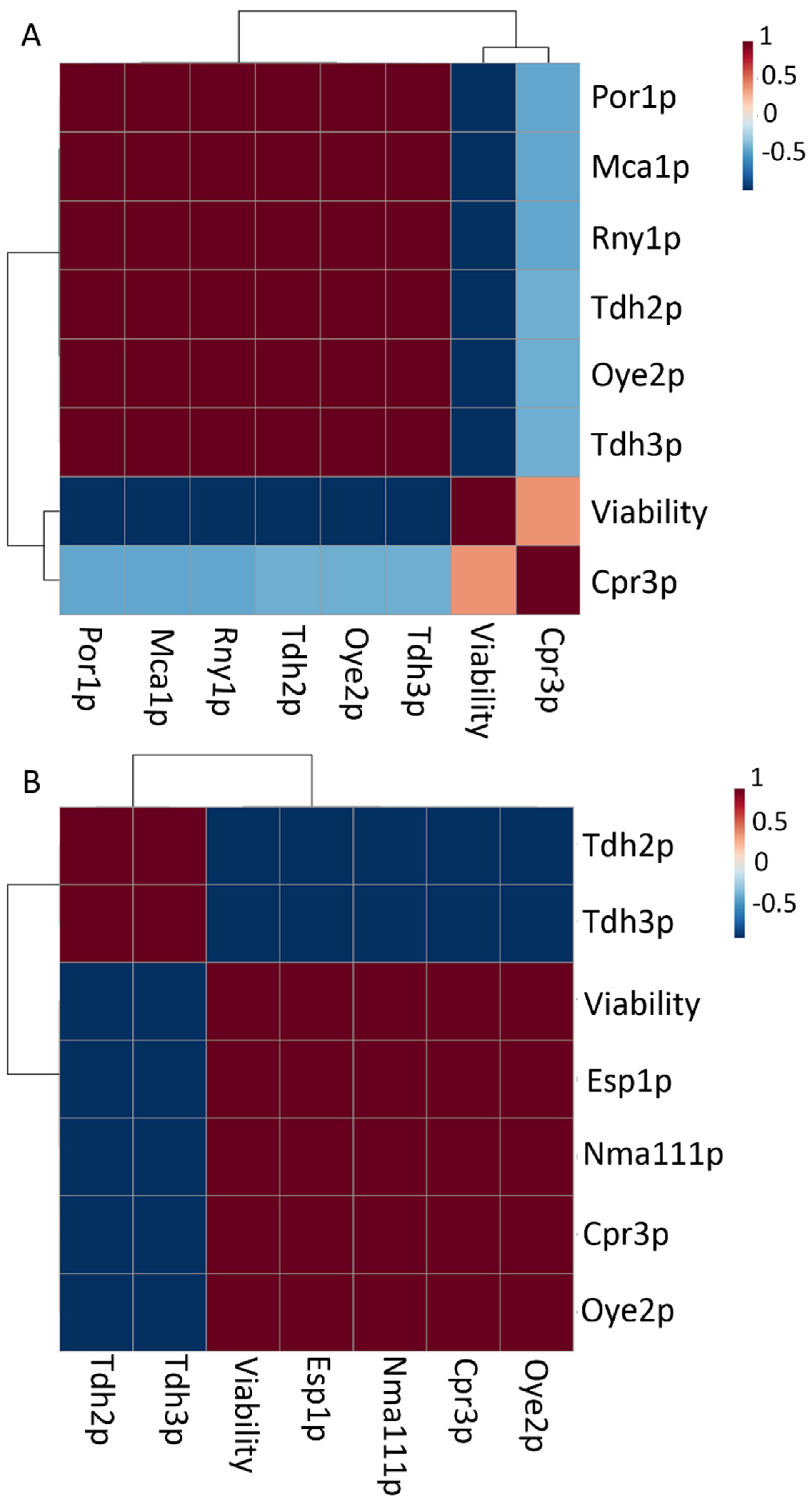