Oral Microbiota: Discovering and Facing the New Associations with Systemic Diseases
Next Article in Special Issue

Genomic Features of Cladobotryum dendroides, Which Causes Cobweb Disease in Edible Mushrooms, and Identification of Genes Related to Pathogenicity and Mycoparasitism

Pathogens hitting the plant cell wall is the first impetus that triggers the phenylpropanoid pathway for plant defense. The phenylpropanoid pathway bifurcates into the production of an enormous array of compounds based on the few intermediates of the shikimate pathway in response to cell wall breaches by pathogens. The whole metabolomic pathway is a complex network regulated by multiple gene families and it exhibits refined regulatory mechanisms at the transcriptional, post-transcriptional, and post-translational levels. The pathway genes are involved in the production of anti-microbial compounds as well as signaling molecules. The engineering in the metabolic pathway has led to a new plant defense system of which various mechanisms have been proposed including salicylic acid and antimicrobial mediated compounds. In recent years, some key players like phenylalanine ammonia lyases (PALs) from the phenylpropanoid pathway are proposed to have broad spectrum disease resistance (BSR) without yield penalties. Now we have more evidence than ever, yet little understanding about the pathway-based genes that orchestrate rapid, coordinated induction of phenylpropanoid defenses in response to microbial attack. It is not astonishing that mutants of pathway regulator genes can show conflicting results. Therefore, precise engineering of the pathway is an interesting strategy to aim at profitably tailored plants. Here, this review portrays the current progress and challenges for phenylpropanoid pathway-based resistance from the current prospective to provide a deeper understanding. View Full-Text
Keywords: phenylpropanoid pathway; plant defense; lignin; monolignol pathway; broad spectrum resistance phenylpropanoid pathway; plant defense; lignin; monolignol pathway; broad spectrum resistance
►▼ Show Figures 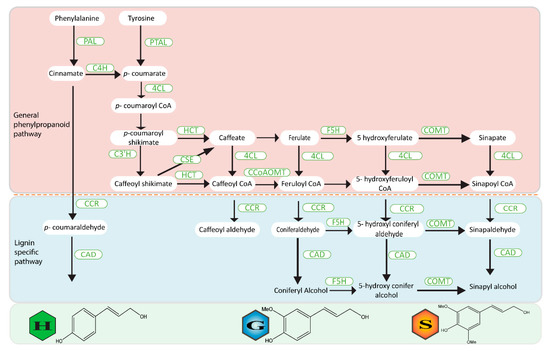