Dichotomy in Fatal Outcomes in a Large Cohort of People Living with HTLV-1 in São Paulo, Brazil

Background: Despite its relatively low incidence of associated diseases, Human T-cell Leukemia Virus-1 (HTLV-1) infection was reported to carry a significant risk of mortality in several endemic areas. HTLV-1-associated diseases, adult T-cell leukemia/lymphoma (ATLL) and HTLV-1-associated myelopathy/tropical spastic paraperesis (HAM/TSP), as well as frequent coinfections with human immunodeficiency virus (HIV), hepatitis C virus (HCV), and Strongyloides stercoralis were associated to increased morbidity and mortality of HTLV-1 infection. Objective: To determine the mortality rate and its associated variables from an open cohort started in July 1997 at the HTLV Clinic, Emilio Ribas Institute (IIER), a major infectious disease hospital in São Paulo, Brazil. Methods: Since inception up to September 2018, we admitted 727 HTLV-1-infected individuals, with a rate of 30–50 new admissions per year. All patient data, including clinical and laboratory data, were regularly updated throughout the 21-year period, using a dedicated REDCap database. The Ethical Board of IIER approved the protocol. Results: During 21 years of clinical care to people living with HTLV-1 in the São Paulo region, we recruited 479 asymptomatic HTLV-1-infected individuals and 248 HAM/TSP patients, of which 632 remained under active follow-up. During a total of 3800 person-years of follow-up (maximum follow-up 21.5 years, mean follow-up 6.0 years), 27 individuals died (median age of 51.5 years), of which 12 were asymptomatic, one ATLL patient and 14 HAM/TSP patients. HAM/TSP diagnosis (but neither age nor gender) was a significant predictor of increased mortality by univariate and multivariate (hazard ratio (HR) 5.03, 95% CI [1.96–12.91], p = 0.001) Cox regression models. Coinfection with HIV/HCV was an independent predictor of increased mortality (HR 15.08; 95% CI [5.50–41.32]; p < 0.001), with AIDS-related infections as a more frequent cause of death in asymptomatics (6/13; p = 0.033). HIV/HCV-negative fatal HAM/TSP cases were all female, with urinary tract infection and decubitus ulcer-associated sepsis as the main cause of death (8/14, p = 0.002). Conclusions: All-cause mortality among people living with HTLV-1 in São Paulo differs between asymptomatic (2.9%) and HAM/TSP patients (7.3%), independent of age and gender. We observe a dichotomy in fatal cases, with HAM/TSP and HIV/HCV coinfection as independent risk factors for death. Our findings reveal an urgent need for public health actions, as the major causes of death, infections secondary to decubitus ulcers, and immune deficiency syndrome (AIDS)-related infections, can be targeted by preventive measures.
Keywords: HTLV-1; mortality; HAM/TSP; Brazil HTLV-1; mortality; HAM/TSP; Brazil

Human T-cell Leukemia Virus-1 (HTLV-1), the first human retrovirus discovered, is the causative agent of adult T-cell leukemia/lymphoma (ATLL) and HTLV-1-associated myelopathy/tropical spastic paraperesis (HAM/TSP) [1,2], with approximately 5–10 million people infected worldwide, almost one million of them in Brazil [3]. The number of infected people may be higher, considering that only 2/3 of the world has been mapped for HTLV-1 infection [3]. After the adoption of mandatory national blood screening tests in 1993 and the observed behavioral change from intravenous to inhalation drug abuse, parental exposure to HTLV-1/2 dropped [4,5,6]. However, our group has documented rates of 40% of sexual transmission [6] and of 13% of vertical transmission [7,8].
The incidence of ATLL and HAM/TSP varies from 0.5% to 10% among HTLV-1 infected subjects, increasing morbidity and mortality rates [9] Additionally, treatment of coinfections, such as HIV and HCV, can be delayed due to HTLV-1 promoting an inefficacious increase in CD4+ cells, leading to a delay in antiretroviral therapy (ART) initiation and, possibly, inefficacious HCV clearance [10,11,12,13]. In endemic countries, parasitic coinfection with Strongyloides stercoralis also increases morbidity and mortality [12].
Previous studies in Japan, Australia, West-Africa, and the US observed variable mortality risks among HTLV-1-infected cohorts [14,15,16,17,18,19]. Despite the large variability among these populations, all studies reported that HTLV-1 by itself increased the risk for increased mortality [14,15,16,17,18,19], although confounding factors should be taken into account [18]. A recent systematic review and meta-analysis confirmed a significantly increased risk (RR 1.57) for mortality in people living with HTLV-1 [20]. Here, we report data spanning more than two decades of follow-up of a cohort of people living with HTLV-1 from a single tertiary Brazilian center, regarding mortality and related risk factors.

We retrospectively reviewed medical records from the HTLV-1 cohort from the outpatient clinic of “Instituto de Infectologia Emílio Ribas” (IIER), Sao Paulo city, Brazil. IIER is a public tertiary infectious disease reference hospital with an HTLV-1 outpatient service since 1997, with new patients added at a rate of approximately 30–50 patients/year [21]. The included patients were at least 18 years old and had to have tested positive to HTLV-1 through third generation EIA (Murex I/II, Abbott Murex Diagnostic, Dartford, UK), confirmed by Western-blot (Soi Prasarnjai, Yannaw, Thailand) and/or polymerase chain reaction (PCR) [22]. Patients with incomplete data and/or lost to follow-up were excluded for this analysis.

All individuals were evaluated by neurologist/infectious diseases specialists at least once in the 12 months previous to the start of data collection for this study (September 2018). Clinical variables concerning neurological, dermatological, ophthalmological, rheumatologic, urological, and buccal aspects were stored in a previously validated electronic database using RedCap® [23]. People living with HTLV-1 were classified at recruitment as asymptomatic or HAM/TSP, according to the diagnostic criteria proposed by Castro-Costa et al. [24]. HAM/TSP severity was assessed by Osame motor disability scale (OMDS) [25]. The time frame for data collection was from July 1997 to December 2018.

Statistical analysis was conducted using Mann–Whitney test for nonparametric data, and Chi-square or Fisher exact test for proportions. Univariate and multivariate Cox proportional hazard analysis was performed to identify independent variables associated with the risk of death, with Wald test for hazard ratio (HR) beta coefficient. For survival analysis, the Kaplan–Meier method was used to compare the probability of survival and the median survival time, and the log-rank test to compare survival curves. Death rate was expressed as 100 person-years; time was measured since the start of follow-up until death. Survival analysis was performed using SPSS® 21 (Statistical Package for the Social Sciences-21. Statistical Software. IBM, NY, USA).

The study was approved by IIER’s ethical board under the protocol 86806218.9.0000.0061. Signed informed consent was obtained from all participants prior to study inclusion. This study follows the principles of the Declaration of Helsinki.

From July 1997 to December 2018, a total of 727 individuals diagnosed with HTLV-1 infection were recruited and classified as asymptomatic (n = 479) or HAM/TSP (n = 248) following complete neurological examination [24]. This is an open cohort, with new patients added at a rate of approximately 30–50 per year, also including patients with HIV and/or HCV coinfections. A total of 38 asymptomatic (7.9%) and 57 HAM/TSP cases (23.0%) were excluded from analysis due to loss of follow-up, i.e., no reported visit in the last 24 months. Thus, the total cohort for the current analysis was comprised of 632 subjects (Figure 1).

We classified the cohort according to initial diagnosis at recruitment, either “HAM/TSP” or “no HAM/TSP” (Figure 1). During follow-up, two HTLV-1-infected individuals originally diagnosed as “asymptomatic” developed ATLL, one of which died. Although we previously described a subset (42 of 175) of asymptomatics in the cohort which developed an “intermediate syndrome” [26], overlapping with “probable HAM/TSP” according to Castro-Costa criteria, none of these individuals originally diagnosed as “asymptomatic” progressed to clinically definite HAM/TSP and none of them died. Table 1 shows the general characteristics of the deceased individuals from the cohort, as well as the potential risk factors for mortality, including coinfection with HCV and/or HIV. The overall mortality rate was 0.7 per 100 person-years. During a total of 3800 person-years of follow-up (mean follow-up six years), we observed 27 fatal cases (4.3%), of which 13 were asymptomatic (2.9%) and 14 (7.3%) were HAM/TSP patients.
The overall mean age of death was 52.0 years, which was not significantly different between cases with (54.6 years, range 38–78) and without (49.4 years, range 40–68) HAM/TSP diagnosis (Table 1, p = 0.23). We observed an overall 0.8:1 female/male ratio among all fatal cases, but an increased 2:1 female ratio for the fatal HAM/TSP cases, although this difference was not statistically significant (Table 1, p = 0.17). The main causes of death were infectious, predominated by sepsis and urinary tract infections (UTI) in the whole cohort, as well as among those without HAM/TSP diagnosis. However, the main cause of death among HAM/TSP patients was decubitus pressure ulcers (8/14, 57.1%), which was absent in asymptomatic fatal cases (Table 1, p = 0.002). On the other hand, among the HIV/HCV coinfected individuals, the main causes of death (6/13, 46.2%) were sepsis and AIDS -related infections (cryptococcal meningitis and Toxoplasmosis encephalitis), the latter being significantly higher (p = 0.033) among fatal cases without HAM/TSP (Table 1). Of the three fatal cases with neoplasia in the cohort, two were linked to oncogenic viruses: one female ATL patient and one male patient (HCV-positive) with hepatocarcinoma.

We would like to thank all the interns of the IIER Neurology program, the patients and their relatives for their participation. 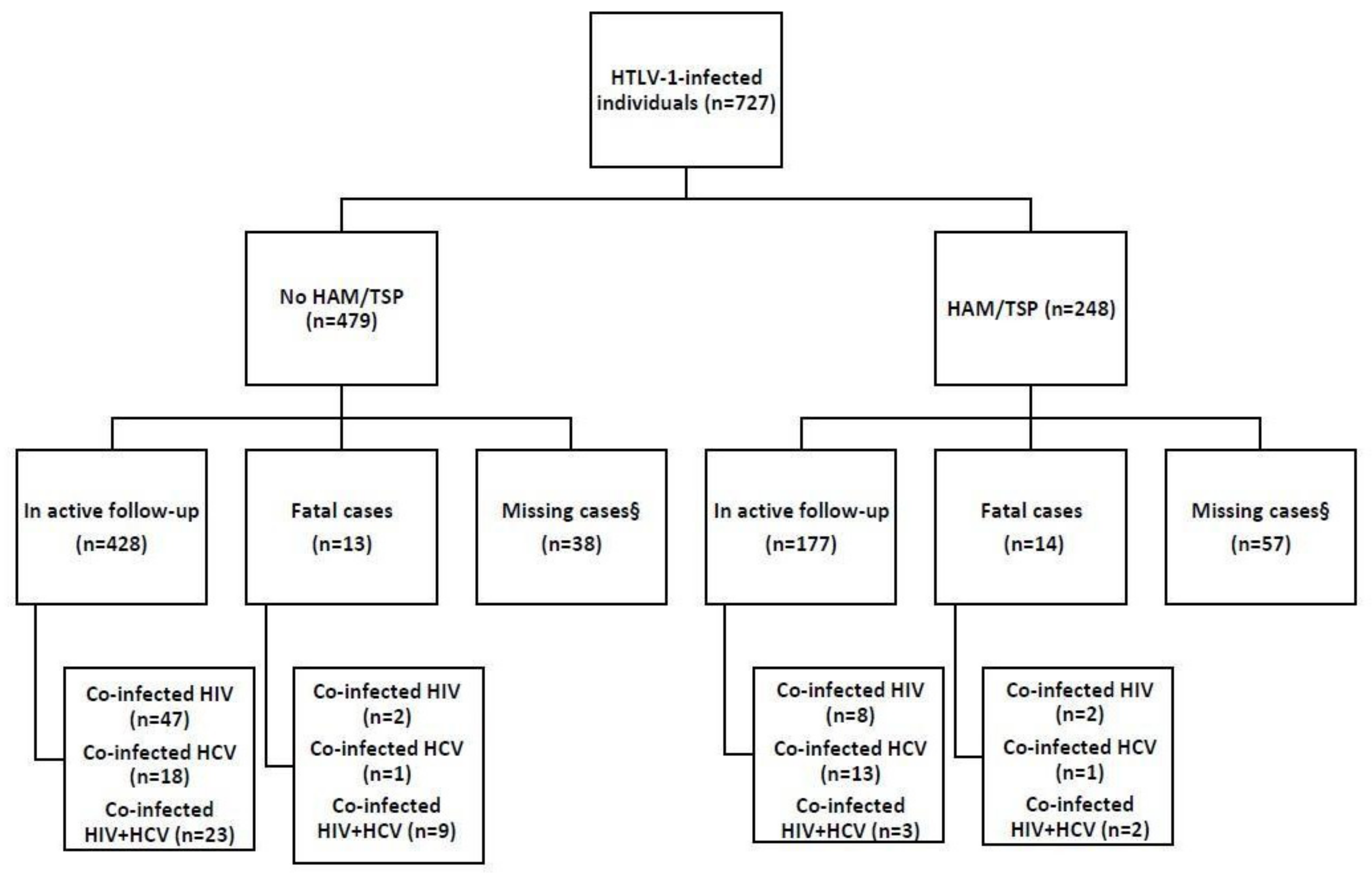 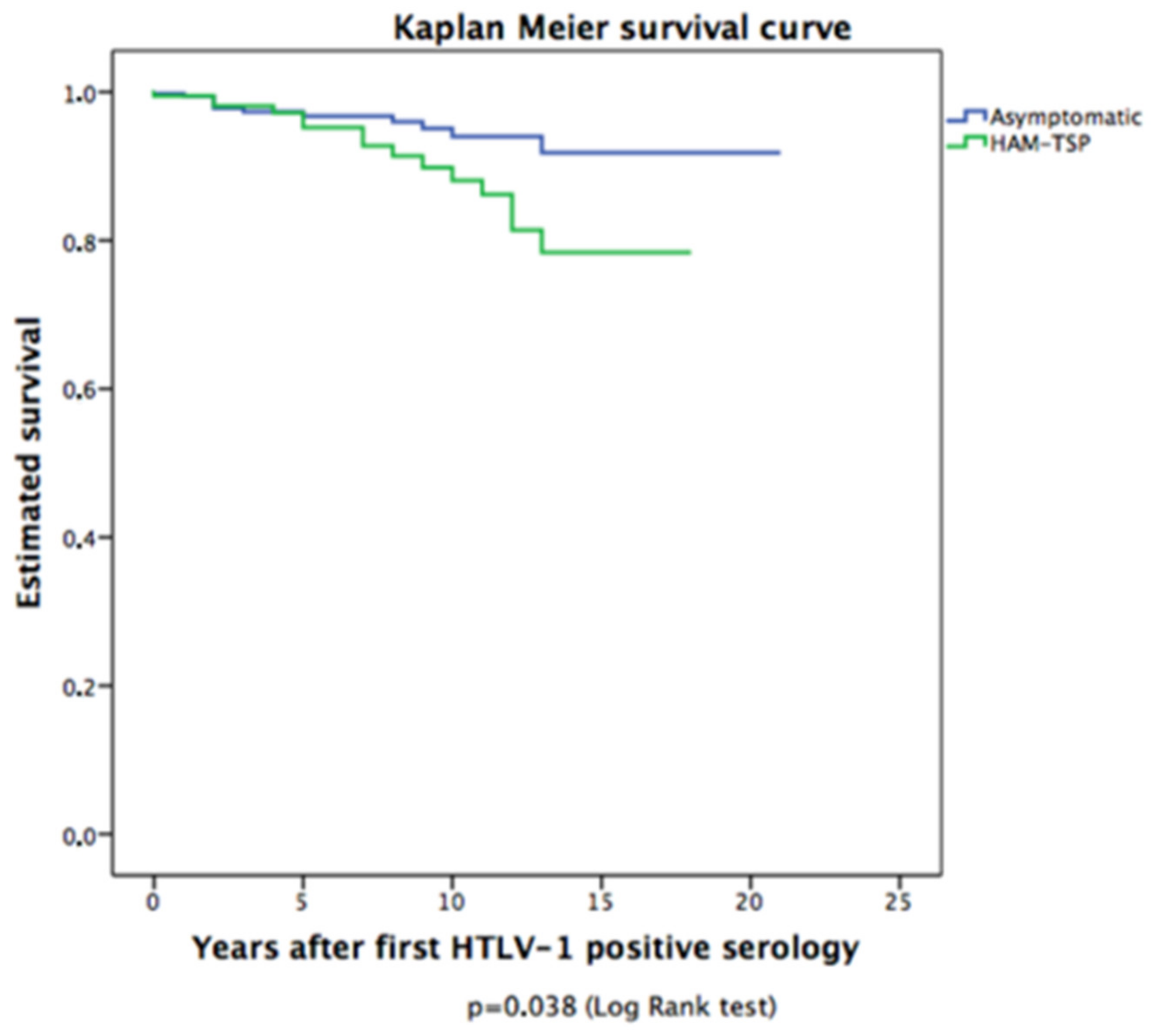 Table 3. Multivariate Cox proportional hazard analysis.
Table 3. Multivariate Cox proportional hazard analysis.
a Wald test; CI: Confidence interval; HR: Hazard ratio.
© 2019 by the authors. Licensee MDPI, Basel, Switzerland. This article is an open access article distributed under the terms and conditions of the Creative Commons Attribution (CC BY) license (http://creativecommons.org/licenses/by/4.0/).
We use cookies on our website to ensure you get the best experience. Read more about our cookies here.
Accept
We have just recently launched a new version of our website. Help us to further improve by taking part in this short 5 minute survey here. here.
Never show this again