Dichotomy in Fatal Outcomes in a Large Cohort of People Living with HTLV-1 in São Paulo, Brazil

Background: Despite its relatively low incidence of associated diseases, Human T-cell Leukemia Virus-1 (HTLV-1) infection was reported to carry a significant risk of mortality in several endemic areas. HTLV-1-associated diseases, adult T-cell leukemia/lymphoma (ATLL) and HTLV-1-associated myelopathy/tropical spastic paraperesis (HAM/TSP), as well as frequent coinfections with human immunodeficiency virus (HIV), hepatitis C virus (HCV), and Strongyloides stercoralis were associated to increased morbidity and mortality of HTLV-1 infection. Objective: To determine the mortality rate and its associated variables from an open cohort started in July 1997 at the HTLV Clinic, Emilio Ribas Institute (IIER), a major infectious disease hospital in São Paulo, Brazil. Methods: Since inception up to September 2018, we admitted 727 HTLV-1-infected individuals, with a rate of 30–50 new admissions per year. All patient data, including clinical and laboratory data, were regularly updated throughout the 21-year period, using a dedicated REDCap database. The Ethical Board of IIER approved the protocol. Results: During 21 years of clinical care to people living with HTLV-1 in the São Paulo region, we recruited 479 asymptomatic HTLV-1-infected individuals and 248 HAM/TSP patients, of which 632 remained under active follow-up. During a total of 3800 person-years of follow-up (maximum follow-up 21.5 years, mean follow-up 6.0 years), 27 individuals died (median age of 51.5 years), of which 12 were asymptomatic, one ATLL patient and 14 HAM/TSP patients. HAM/TSP diagnosis (but neither age nor gender) was a significant predictor of increased mortality by univariate and multivariate (hazard ratio (HR) 5.03, 95% CI [1.96–12.91], p = 0.001) Cox regression models. Coinfection with HIV/HCV was an independent predictor of increased mortality (HR 15.08; 95% CI [5.50–41.32]; p < 0.001), with AIDS-related infections as a more frequent cause of death in asymptomatics (6/13; p = 0.033). HIV/HCV-negative fatal HAM/TSP cases were all female, with urinary tract infection and decubitus ulcer-associated sepsis as the main cause of death (8/14, p = 0.002). Conclusions: All-cause mortality among people living with HTLV-1 in São Paulo differs between asymptomatic (2.9%) and HAM/TSP patients (7.3%), independent of age and gender. We observe a dichotomy in fatal cases, with HAM/TSP and HIV/HCV coinfection as independent risk factors for death. Our findings reveal an urgent need for public health actions, as the major causes of death, infections secondary to decubitus ulcers, and immune deficiency syndrome (AIDS)-related infections, can be targeted by preventive measures. View Full-Text
Keywords: HTLV-1; mortality; HAM/TSP; Brazil HTLV-1; mortality; HAM/TSP; Brazil
►▼ Show Figures 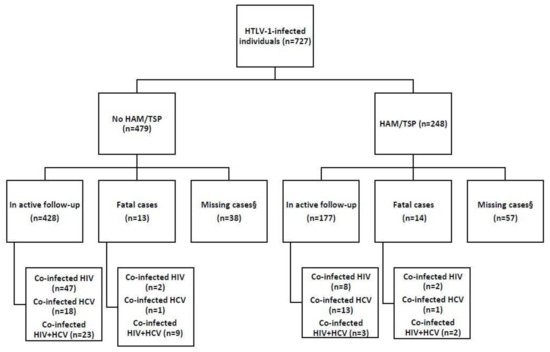