Background: The perpetuation of schistosomiasis japonica in the Philippines depends to a major extent on the persistence of its intermediate host Oncomelania hupensis quadrasi, an amphibious snail. While the malacological survey remains the method of choice in determining the contamination of the environment as evidenced by snails infected with schistosome larval stages, an emerging technology known as environmental DNA (eDNA) detection provides an alternative method. Previous reports showed that O. hupensis quadrasi eDNA could be detected in water, but no reports have been made on its detection in soil. Methods: This study, thus focused on the detection of O. hupensis quadrasi eDNA from soil samples collected from two selected schistosomiasis-endemic barangays in Gonzaga, Cagayan Valley using conventional and TaqMan-quantitative (qPCR) PCRs. Results: The results show that qPCR could better detect O. hupensis quadrasi eDNA in soil than the conventional method. In determining the possible distribution range of the snail, basic edaphic factors were measured and correlated with the presence of eDNA. The eDNA detection probability increases as the pH, phosphorous, zinc, copper, and potassium content increases, possibly indicating the conditions in the environment that favor the presence of the snails. A map was generated to show the probable extent of the distribution of the snails away from the body of the freshwater. Conclusion: The information generated from this study could be used to determine snail habitats that could be possible hotspots of transmission and should, therefore, be targeted for snail control or be fenced off from human and animal contact or from the contamination of feces by being a dumping site for domestic wastes. View Full-Text
Keywords: Oncomelania hupensis quadrasi; schistosomiasis japonica; environmental DNA; edaphic factors; snail surveillance Oncomelania hupensis quadrasi; schistosomiasis japonica; environmental DNA; edaphic factors; snail surveillance
►▼ Show Figures 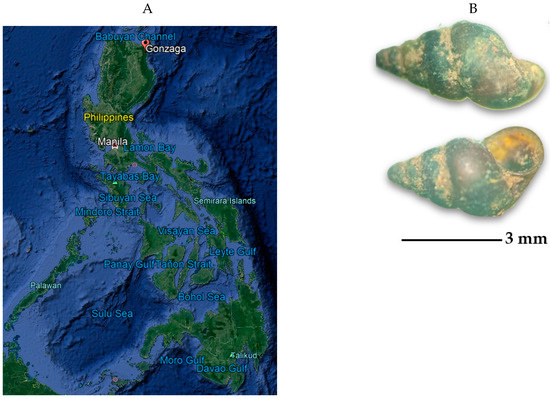