Pablo A. González
1 and

Worldwide, human respiratory syncytial virus (RSV) is the most common etiological agent for acute lower respiratory tract infections (ALRI). RSV-ALRI is the major cause of hospital admissions in young children, and it can cause in-hospital deaths in children younger than six months old. Therefore, RSV remains one of the pathogens deemed most important for the generation of a vaccine. On the other hand, the effectiveness of a vaccine depends on the development of immunological memory against the pathogenic agent of interest. This memory is achieved by long-lived memory T cells, based on the establishment of an effective immune response to viral infections when subsequent exposures to the pathogen take place. Memory T cells can be classified into three subsets according to their expression of lymphoid homing receptors: central memory cells (TCM), effector memory cells (TEM) and resident memory T cells (TRM). The latter subset consists of cells that are permanently found in non-lymphoid tissues and are capable of recognizing antigens and mounting an effective immune response at those sites. TRM cells activate both innate and adaptive immune responses, thus establishing a robust and rapid response characterized by the production of large amounts of effector molecules. TRM cells can also recognize antigenically unrelated pathogens and trigger an innate-like alarm with the recruitment of other immune cells. It is noteworthy that this rapid and effective immune response induced by TRM cells make these cells an interesting aim in the design of vaccination strategies in order to establish TRM cell populations to prevent respiratory infectious diseases. Here, we discuss the biogenesis of TRM cells, their contribution to the resolution of respiratory viral infections and the induction of TRM cells, which should be considered for the rational design of new vaccines against RSV. View Full-Text
Keywords: human respiratory syncytial virus; human orthopneumovirus; respiratory infection; resident memory T cells; vaccine development human respiratory syncytial virus; human orthopneumovirus; respiratory infection; resident memory T cells; vaccine development
►▼ Show Figures 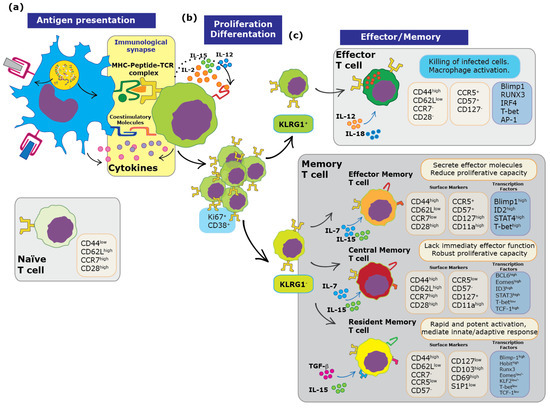