Bacteria can be resistant to multiple antibiotics and we are fast approaching a time when antibiotics will not work on some bacterial infections. New antimicrobial compounds are urgently necessary. Plants are considered the greatest source to obtain new antimicrobials. This study aimed to assess the antimicrobial activity of four phytochemicals—7-hydroxycoumarin (7-HC), indole-3-carbinol (I3C), salicylic acid (SA) and saponin (SP)—against Escherichia coli and Staphylococcus aureus, either as planktonic cells or as biofilms. These bacteria are commonly found in hospital-acquired infections. Some aspects on the phytochemicals mode of action, including surface charge, hydrophobicity, motility and quorum-sensing inhibition (QSI) were investigated. In addition, the phytochemicals were combined with three antibiotics in order to assess any synergistic effect. 7-HC and I3C were the most effective phytochemicals against E. coli and S. aureus. Both phytochemicals affected the motility and quorum-sensing (QS) activity, which means that they can play an important role in the interference of cell-cell interactions and in biofilm formation and control. However, total biofilm removal was not achieved with any of the selected phytochemicals. Dual combinations between tetracycline (TET), erythromycin (ERY) and ciprofloxacin (CIP) and I3C produced synergistic effects against S. aureus resistant strains. The overall results demonstrates the potential of phytochemicals to control the growth of E. coli and S. aureus in both planktonic and biofilm states. In addition, the phytochemicals demonstrated the potential to act synergistically with antibiotics, contributing to the recycling of old antibiotics that were once considered ineffective due to resistance problems. View Full-Text
Keywords: antimicrobial activity; biofilms; quorum-sensing inhibition; phytochemicals; resistance; synergism antimicrobial activity; biofilms; quorum-sensing inhibition; phytochemicals; resistance; synergism
►▼ Show Figures 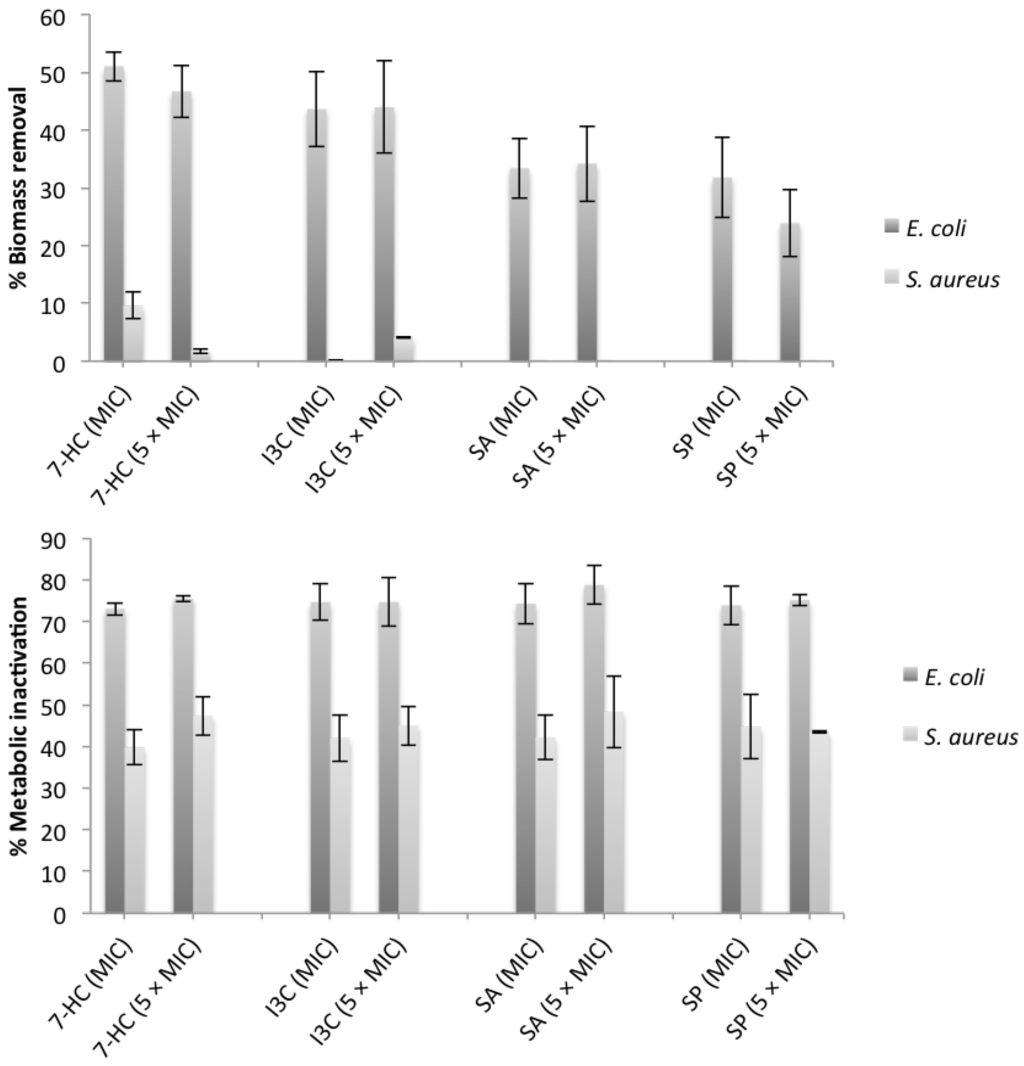