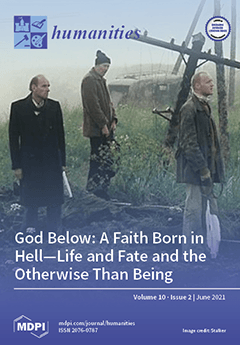 Cover Story (view full-size image): The prophets of the Tanakh, crying out on behalf of the widow and the orphan, testify to what Levinas calls the Otherwise than being. In the modern world, the holy fool, a sort of successor to the prophet, protests the reification of flesh-and-blood existents into Existence by testifying to this selfsame Otherwise. They do so through a self-emptying, a being-for-the-other, that works to their own detriment, even death. Examples of the holy fool include Dostoevsky’s Alyosha in The Brothers Karamazov and Grossman’s Ikonnikov in Life and Fate. Though Dostoevsky predates the Shoah, his effect on Levinas also links him to Grossman. Both men, along with Levinas, could be described as advocates of an ethic of holy folly, which presupposes a God who is not the pinnacle of Being but the Otherwise than being. View this paper.
Previous Issue
Volume 10, March
Next Issue
Volume 10, September
We use cookies on our website to ensure you get the best experience. Read more about our cookies here.
Accept
We have just recently launched a new version of our website. Help us to further improve by taking part in this short 5 minute survey here. here.
Never show this again