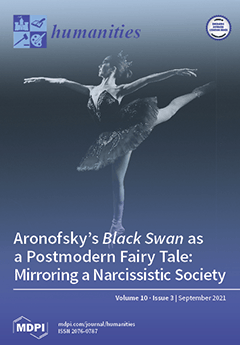 Cover Story (view full-size image): Based on Swan Lake, Black Swan portrays an ingenue’s maturation into a woman and follows a fairy-tale plot in which a naïve heroine overcomes enemies and obstacles to achieve success and sexual maturity. Unlike traditional Märchen, this cinematic anti-fairy tale blurs distinctions between good and evil, helper and adversary, and reality vs. fantasy and concludes with an apparent death. Freudian and Jungian interpretations of Doppelgängers—rivals, a controlling mother—will elucidate their key role in the protagonist's development. As in many fairy tales, the film criticizes the values of its era, namely, the capitalist exploitation of individuals and narcissistic aspects of contemporary society with its excessive worship of youth, beauty and celebrity, and its most pernicious results—escape into fantasy and insanity, aggressive rivalry, violence, and self-destruction. View this paper.
Previous Issue
Volume 10, June
Next Issue
Volume 10, December
We use cookies on our website to ensure you get the best experience. Read more about our cookies here.
Accept
We have just recently launched a new version of our website. Help us to further improve by taking part in this short 5 minute survey here. here.
Never show this again