Submit to Laws Review for Laws 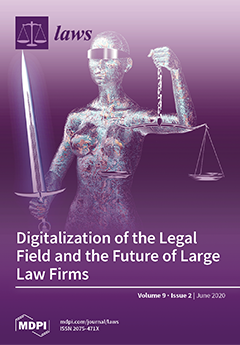 Cover Story (view full-size image): This paper discusses how large law firms should re-organize themselves to maintain a competitive edge in the increasingly digitalized legal field. While providing a brief historical introduction to the rise of large law firms and the challenges posed by the rise of digital capitalism and the gig economy, the paper proposes an original and radical approach to reforming large law firms in the light of digitalization. Among other things, the paper discusses (I) the partnership as an organizational tool for large law firms in an increasingly digital and agile legal field; (II) the importance of multidisciplinary practices and of the relationship between lawyers and non-lawyers within firms; and (III) the centrality of outsourcing strategies to legal tech companies and other actors in order to deliver legal services more effectively and in a more client-oriented manner. View this paper.
Previous Issue
Volume 9, March
Next Issue
Volume 9, September
We use cookies on our website to ensure you get the best experience. Read more about our cookies here.
Accept
We have just recently launched a new version of our website. Help us to further improve by taking part in this short 5 minute survey here. here.
Never show this again