Magnesium carbonate powders are essential in the manufacture of basic refractories capable of withstanding extremely high temperatures and for special types of cement and powders used in the paper, rubber, and pharmaceutical industries. A novel synthesis route is based on CO2 absorption/sequestration by minerals. This combines the global challenge of climate change with materials development. Carbon dioxide has the fourth highest composition in earth’s atmosphere next to nitrogen, oxygen and argon and plays a big role in global warming due to the greenhouse effect. Because of the significant increase of CO2 emissions, mineral carbonation is a promising process in which carbon oxide reacts with materials with high metal oxide composition to form chemically stable and insoluble metal carbonate. The formed carbonate has long-term stability and does not influence the earth’s atmosphere. Therefore, it is a feasible and safe method to bind carbon dioxide in carbonate compounds such as magnesite. The subject of this work is the carbonation of an olivine (Mg2SiO4) and synthetic magnesia sample (>97 wt% MgO) under high pressure and temperature in an autoclave. Early experiments have studied the influence of some additives such as sodium bicarbonate, oxalic acid and ascorbic acid, solid/liquid ratio, and particle size on the carbonation efficiency. The obtained results for carbonation of olivine have confirmed the formation of magnesium carbonate in the presence of additives and complete carbonation of the MgO sample in the absence of additives.
Keywords: MgCO3-powder; synthesis; CO2- absorption; olivine carbonation; autoclave; thermal decomposition; CO2 utilization MgCO3-powder; synthesis; CO2- absorption; olivine carbonation; autoclave; thermal decomposition; CO2 utilization

The samples used were Italian olivine (Figure 2a) and a high-grade synthetic dead burned magnesia (Figure 2b). From its chemical composition apart from the chromite present at approx. 0.45 wt% and other inert minerals at trace levels, the olivine was considered as a mixed Mg-Ni and Fe silicate.
The olivine has been delivered with a particle size of below 200 µm, the used magnesia has a grain size between 10 and 30 mm. Particle Size Distribution PSD Analysis was performed used Mastersizer Hydro 2000G (Malvern PANalytical GmbH, Kassel, Germany)
The carbonation tests were planned for the three different particle size fractions <20 µm, 20–63 µm and 100–200 µm in order to evaluate the optimal process parameters and the use of additives.
The olivine with d90 = 100 µm (90% below 100 microns) as it is presented in the sieve analysis in Figure 3 has been sieved wet to produce the three grain size fractions. The magnesia sample has been crushed and milled in a lab-scale jaw crusher and has also been sieved wet into the required grain size fractions.
The chemical composition of olivine and magnesia was analyzed by X-ray fluorescence XRF using Device PW2404 (Malvern Panalytical B.V., Eindhoven, Netherlands), such is presented in Table 1.
The planned experiments are shown in Table 2.
Carbonation tests have been carried out in the 250 mL autoclave from Parr Instrument Company (Moline, IL, USA), USA as shown in Figure 4 at 175 °C and 117 bars with pure grade CO2. An amount ranging from 10 to 30 g olivine has been added to 150 mL solution in different experiments. After reaction, the liquid had very low contents of metal cations, therefore characterization of the reaction products was restricted to the solid phase by TGA/DSC using Instrument STA 449F3 with Proteus Software (NETZSCH, Selb, Germany) and XRD-Analysis using Bruker D8 Advance with LynxEye detector (Bruker AXS, Karlsruhe, Germany). X-ray powder diffraction patterns were collected on a Bruker-AXS D4 Endeavor diffractometer in Bragg–Brentano geometry, equipped with a copper tube and a primary nickel filter providing Cu Kα1,2 radiation (λ = 1.54187 Å).

The characterization of products was performed using TGA, DSC, XRD and ICP-OES analysis (SPECTRO ARCOS, SPECTRO Analytical Instruments GmbH, Kleve, Germany) in order to confirm the formation of MgCO3. Additionally, the influence of additives on carbonation was discussed.

To evaluate the overall capability of the carbonation process, an experiment was performed on a synthetic reference material (>97 wt% MgO) considering the present mineralogical phases detected via XRD before and after the carbonation (Figure 5 and Figure 6).
The results prove the formation of magnesite (MgCO3) out of periclase (MgO) in the absence of any additives. Both XRD patterns show the existence of a single phase, which underlines the capability of both the reference material and the carbonation process. In the next step of the present study, the carbonation process was applied to an Italian olivine sample as an exemplary natural raw material aiming at a comparable MgCO3 formation as observed utilizing a synthetic reference material. XRD analysis of the initial olivine sample confirms the presence of forsterite, enstatite, clinoenstatite, lizardite, spinel and tremolite, based on hydroxide and silicate of magnesium, calcium and iron (Figure 7).
Unfortunately, the chosen parameters (investigated fraction of 100–200 µm, solid/liquid ratio of 0.066 at 175 °C and 117 bar) did not contribute to the formation of magnesite as analyzed by XRD. Applying the same experimental conditions on an olivine sample ground to a particle size below 20 µm did not yield any magnesite formation as well. However, followed by the addition of NaHCO3, H2C2O4 and C6H8O6 the formation of MgCO3 can be proved via XRD (Figure 8) when using a fraction size of 20–63 µm.

3.2. Analysis of Water Solution after Carbonation of an Olivine

The ICP-OES analysis of water solution after carbonation, as shown in Table 3 confirms very small dissolution of valuable elements such as cobalt. The most dominant species are magnesium and silicon in the order of magnitude of mg/L what corresponds to few percent of leaching efficiency. The pH value confirmed that the solution is a neutral medium.

Thermogravimetric analysis measurements were performed in order to establish the carbonation effect. The calculated carbonation was about 45% in the presence of additives, as shown in Figure 9.
The total analysis of thermal decomposition of formed (Mg,Fe)CO3 is shown in Table 4.
As shown in Table 4, the total weight loss for an initial sample of the Italian olivine in the interval between 25 and 1000 °C amounts 1.7%, what is the amount of bound water in the used sample. The total weight loss for the initial olivine material in the interval between 25 and 470 °C amounts 0.47% in comparison to 3.75% for this sample after carbonation. In difference for the sample without carbonation, in the temperature interval between 470 °C and 595 °C, the weight loss amounts 8.69%, with a thermal effect of 137 J/g, what confirms that this temperature range is most important for thermal decomposition of (Mg,Fe)CO3. Above 775 °C the change of weight is not significant, and thermal decomposition of sample is minimal, what means that the thermal decomposition is finished. In contrast to this experiment in the presence of additives in Exp. 3 with loss of weight of 15.2%, the overall weight losses of experiment 1 is very small (few percent) what confirms a low carbonation degree (as confirmed with XRD analysis in Figure 6). The weight loss for experiment 2 is about 3.5% (red line at Figure 10) which confirms very small carbonation rate in the absence of additives in comparison to the experiments with additives.
This positive effect may be due to “reaction-driven cracking” in the presence of NaHCO3, formation of etch pits, and/or other processes that continually renew the reactive surface area of Mg2SiO4.
NaHCO3 (aq) → Na+ + H+ + CO32−
An addition of oxalic acid leads to formation of Mg-ions in solution, which react with carbonate ions forming magnesium carbonate.
Mg2SiO4 + 2 H2C2O4 → 2Mg2+ + C2O42− + H4SiO4
Mg2+ + CO32− → MgCO3 (s)
The two analyses of thermal decomposition of products after carbonation of magnesia (97 wt%) confirmed total decomposition of the produced MgCO3.
As shown at Figure 11, the weight loss of 52.34 % (TGA-red line) and 52.22 (TGA-blue line) with maximal DSC effect (1281 J/g; blue area) at Tmax = 699.8 °C confirm the formation of magnesium carbonate, what was compared with theoretical value, according to the Equation (16): where: M (Mg) = 24.30 g/mol; M (MgCO3) = 84.30 g/mol, M (MgO)= 40.30 g/mol, M (CO2) = 44.0 g/mol.
Using a ratio between molar mass of magnesium carbonate and magnesium oxide, theoretical calculated loss of carbon dioxide amounts 52.55%, what is in good accordance with an experimental determined weight loss. Finally, it confirms the completed carbonation of synthetic magnesia under the chosen parameters and formation of magnesium carbonate, which particle size distribution was shown at Figure 12.
The measured values of produced magnesium carbonate d50 and d84 amount 15.066 and 37.066 µm, respectively.

Synthesis of magnesium carbonate was studied via carbonation of olivine using different size fractions (under 20 µm, between 20 and 63 µm, and between 100 and 200 µm) with different solid/liquid ratios of 1:15 and 1:5; at 175 °C and pressure of CO2 (117 bar) in an autoclave in the presence and in the absence of additives. The characterization of products using XRD, TGA, PSD and DSC analysis has confirmed the formation of MgCO3. In contrast to carbonation of olivine in the absence of additives the formation of magnesium carbonate is possible at high pressure and temperature with olivine (35.57% MgO) from Italy in the presence of sodium hydrogen carbonate, oxalic acid, and ascorbic acid at 175 °C, 117 bar in 4 h (Exp. 3). The maximum carbonation (more than 95%) was obtained at the same conditions for synthetic magnesia (97.56 wt% MgO) in the absence of additives. In order to validate the first results in 0.25 L autoclave, new scale up experiments will be performed in 1.0 and 10.0 L autoclaves. Especially, the influence of rotating speed, pH-values and different initial secondary materials such as slag and red mud shall be analyzed in our future work. The analysis of the obtained solution after carbonation revealed very small content of cobalt and chromium, but it will be also considered in our future work in the presence of pH buffering agents in order to increase an extraction efficiency. Especially, a life-cycle-assessment of the carbonation process in the presence of additives will be performed in our future work.

We would like to thank the BMBF (Federal Ministry of Education and Research) in Berlin for the financial support for the CO2MIN Project (No. 033RCO14B) in period from 01.06.2017 to 31.05.2020. For a continuous support and cooperation we would like to thank Andreas Bremen, AVT and Hesam Ostovari, LTT, RWTH Aachen University. 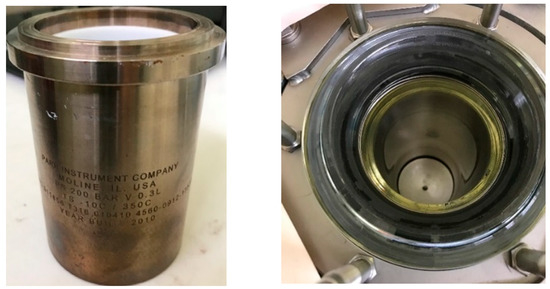 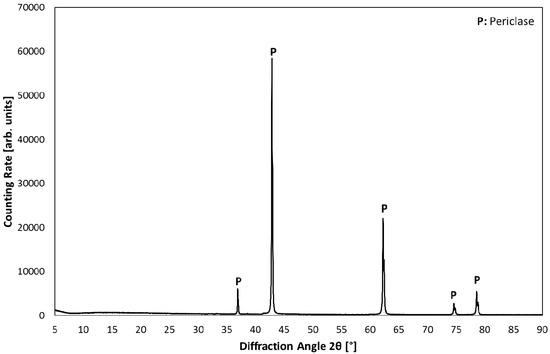 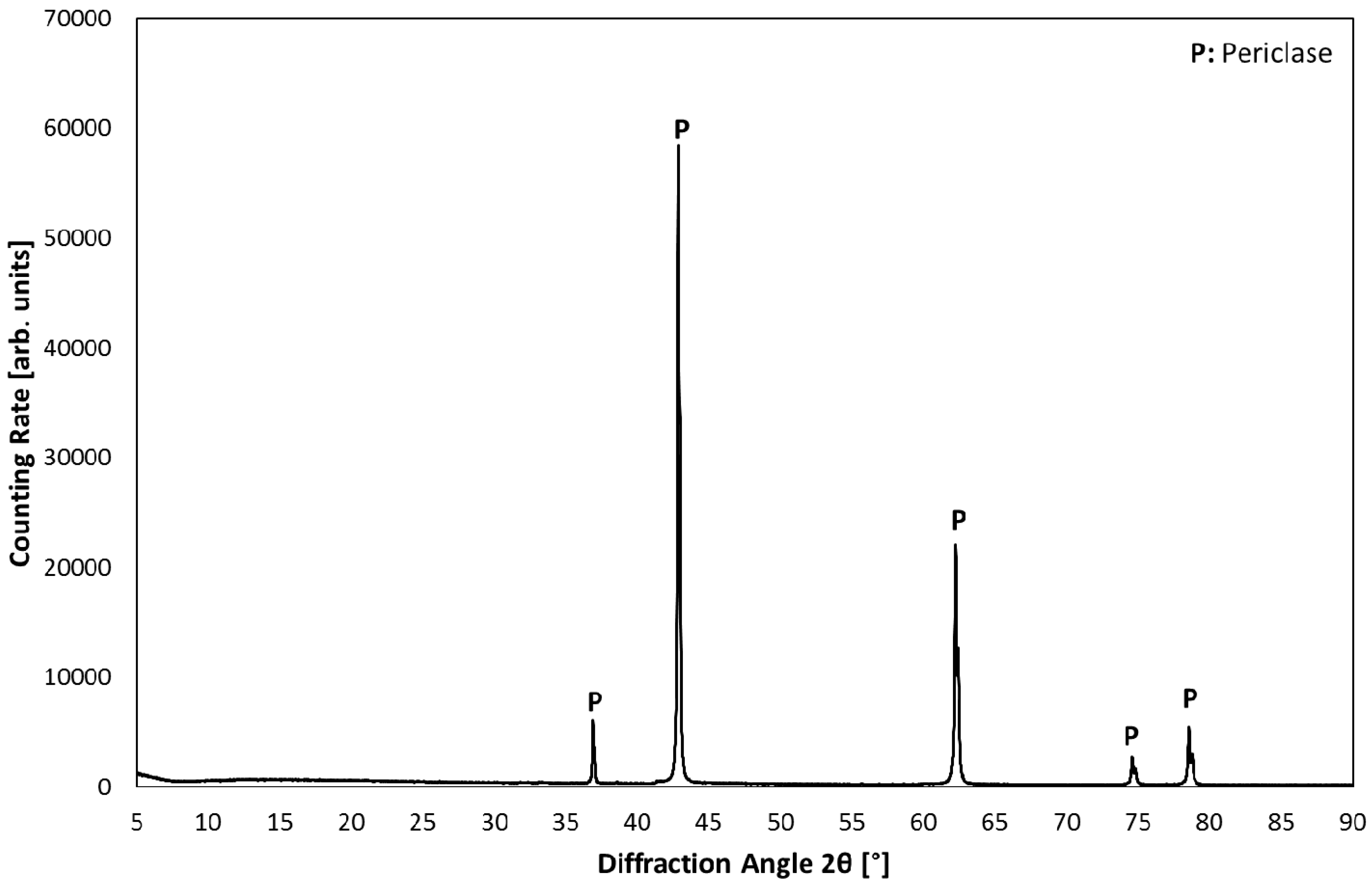 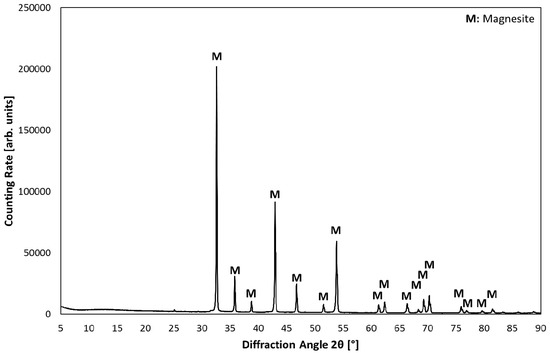 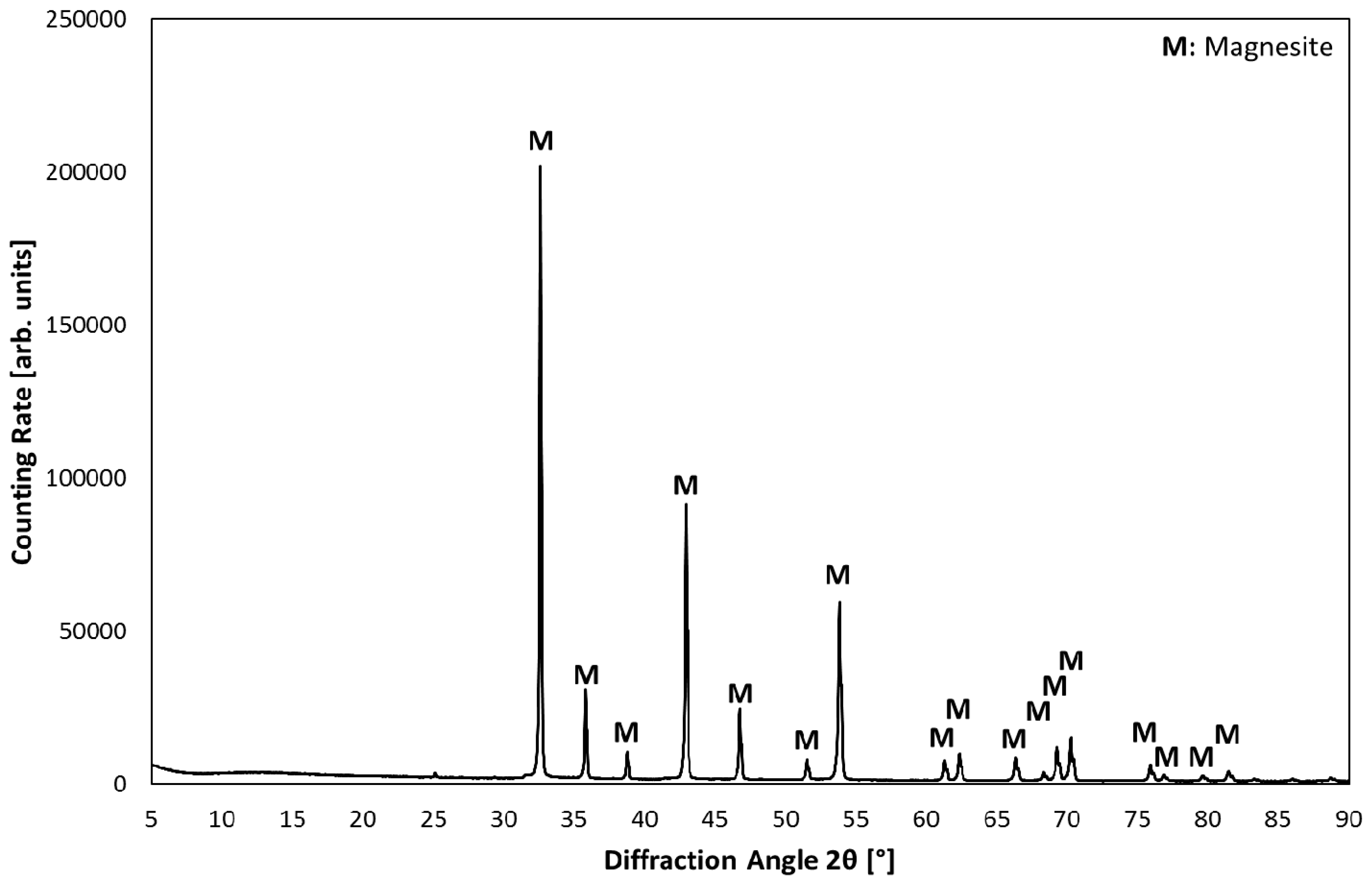 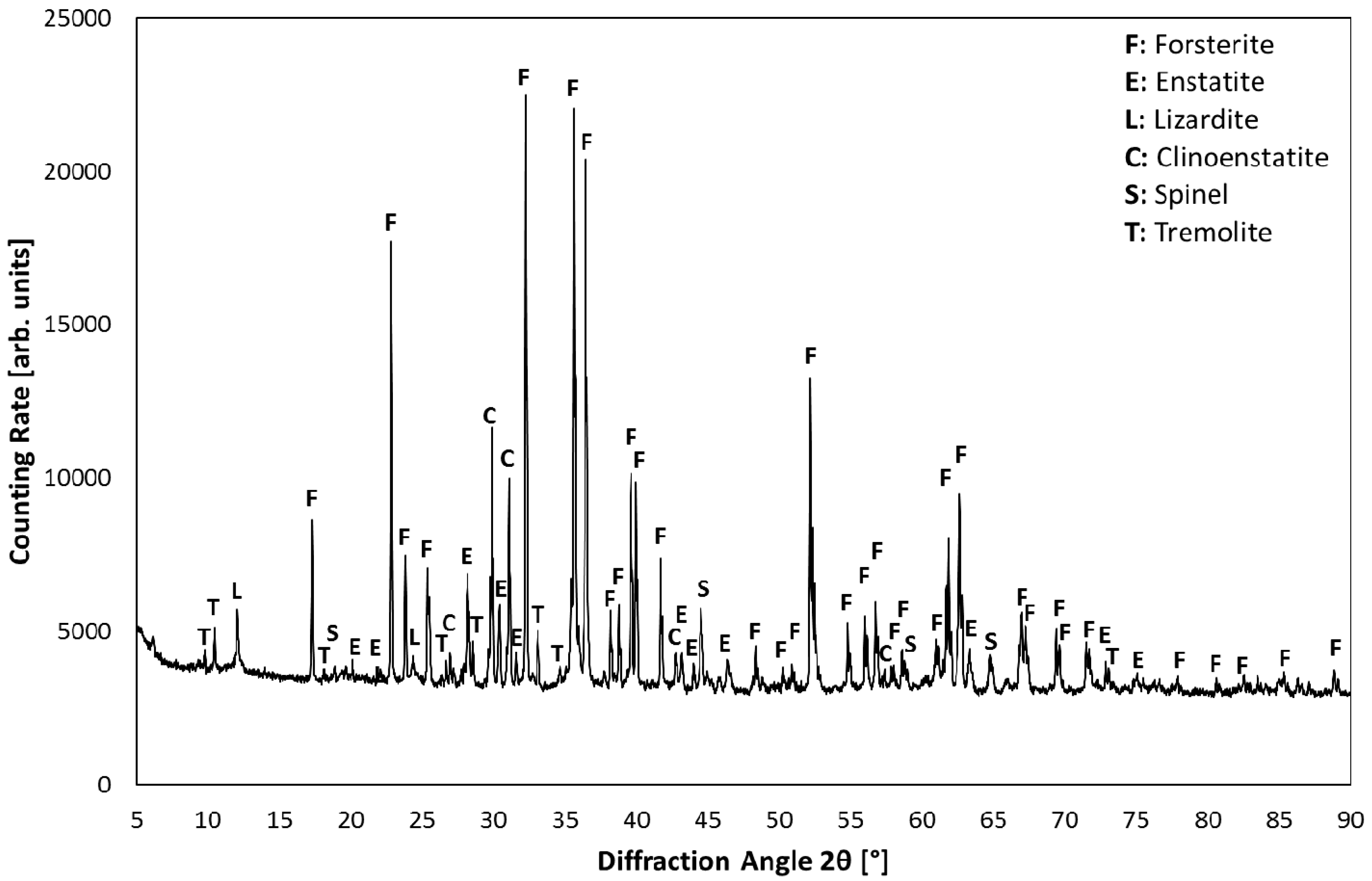 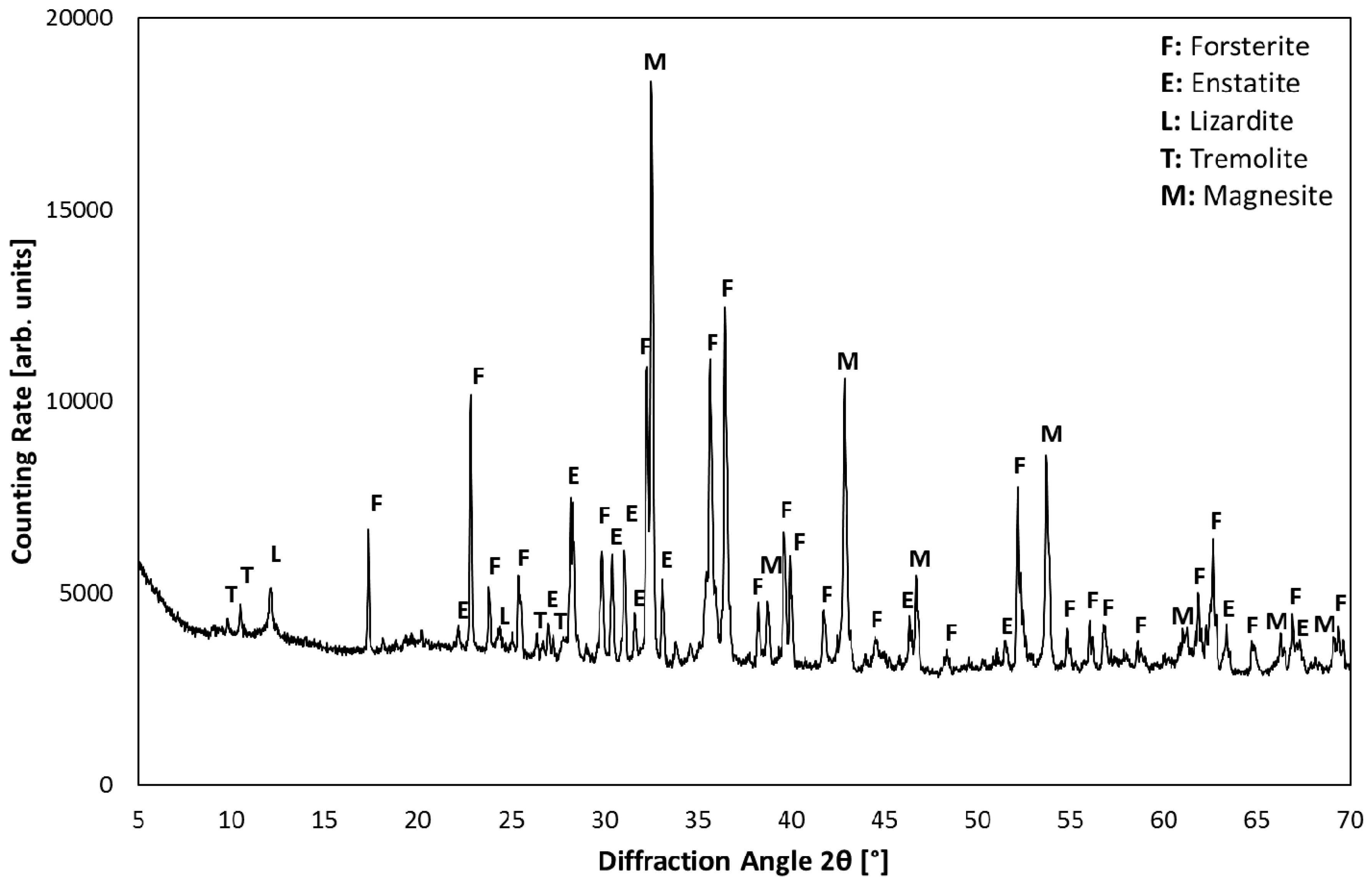 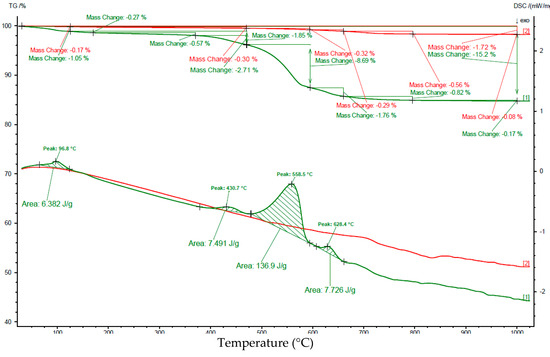 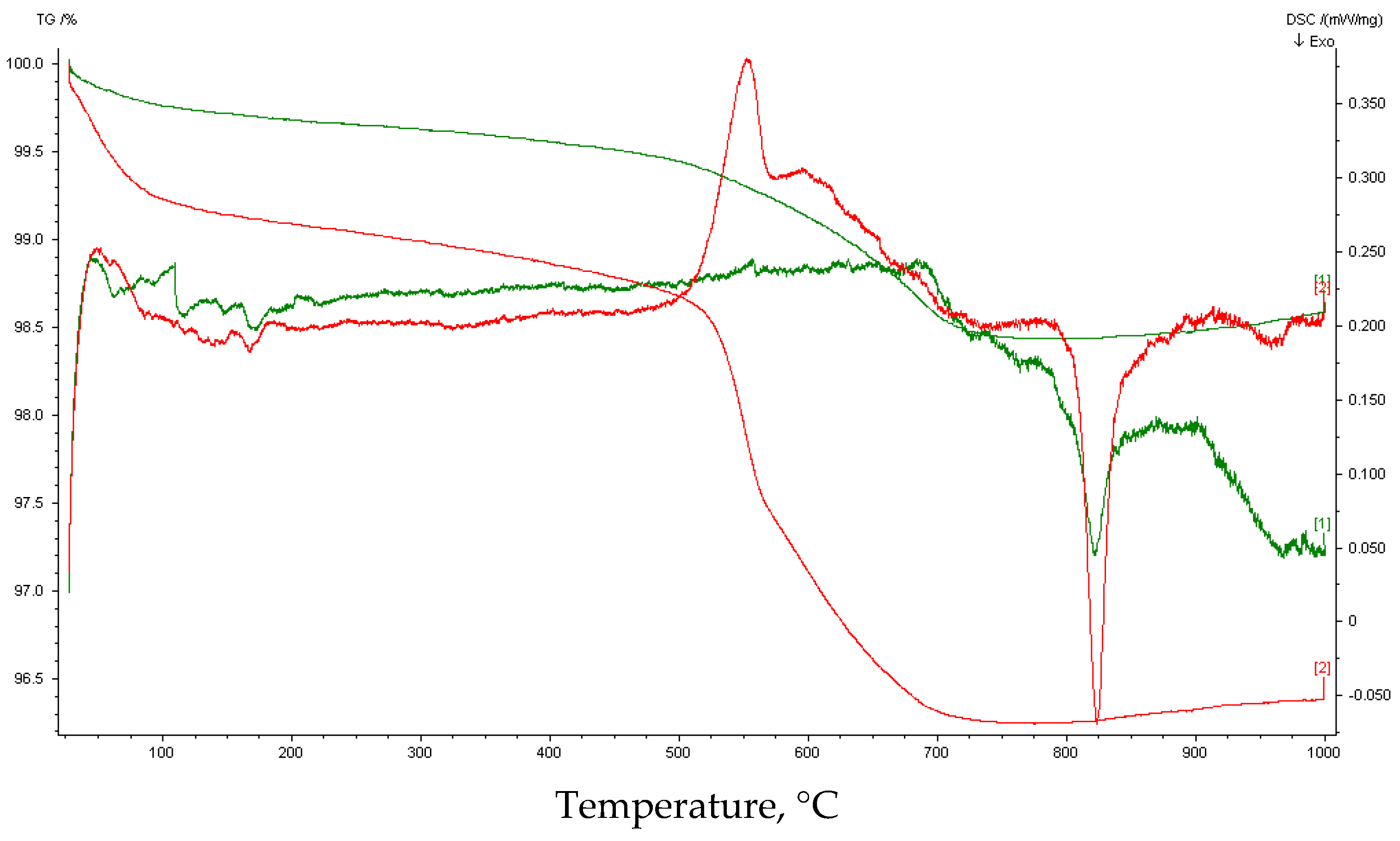