Brazing of titanium provides a joining technique suitable for the fabrication of highly-loaded aerospace components, but it still poses numerous challenges, such as the formation of brittle intermetallic interphases. This study of the interphase formation in brazed joints consisting of different titanium alloys (Ti-CP2, Ti-CP4, Ti-6Al-4V, Ti-6Al-2Mo-4Zr-2Sn) and Ag28Cu shows that complex reactions lead to the formation of various intermetallic phases including a Ti2Cu-TiCu boundary zone. The compositions of the titanium alloys influenced the particular microstructures, which have been characterized with various methods including synchrotron X-ray microtomography. Tensile tests evidence high ultimate tensile strengths that are, importantly, not directly limited by the strength of the brazing alloy. The strength of the Ti2Cu-TiCu phase boundary is significantly increased by the alloying elements in Ti-6Al-4V and Ti-6Al-2Mo-4Zr-2Sn and the crack paths change from boundary failure to transcrystalline fracture through TiCu as well as Ag-rich regions. Cu diffusion into the titanium substrate, leading to a coarse grained β-phase that transforms eutectoidally into a lamellar α-Ti + Ti2Cu structure during cooling, occurred in all systems except Ti-6Al-2Mo-4Zr-2Sn where Mo stabilized a fine grained microstructure and enabled the formation of a columnar TiCu structure. View Full-Text
Keywords: brazing; titanium alloys; intermetallics; synchrotron tomography brazing; titanium alloys; intermetallics; synchrotron tomography
►▼ Show Figures 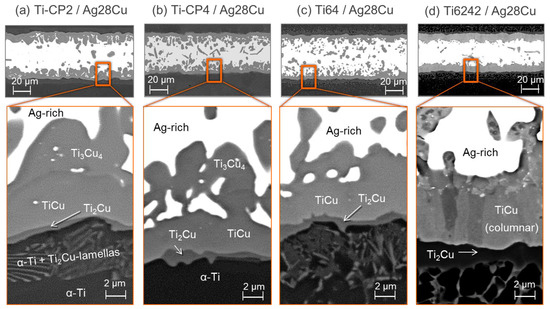