:
In this paper, the influences of relative humidity (RH) and concentration of O2 on copper corrosion in H2S-containing LPG (liquid petroleum gas) were studied. The corrosion products obtained in different environments were also analysed by scanning electron microscopy (SEM), energy dispersive spectrometry (EDS), grazing incidence X-ray diffraction (GIXRD), X-ray photoelectron spectroscopy (XPS) and Fourier transform infrared spectroscopy (FTIR). In H2S-containing LPG, RH has pronounced influence on the corrosion grade of copper. The variation in the critical point (CP) with the RH of LPG is a linear relationship. The presence of O2 in dry H2S has limited influence on the corrosion of copper. In the presence of different RHs, the CP always follows a negative exponential function with O2 concentration. The analysis of different corrosion products implies different corrosion behaviours and mechanisms, which are dependent on the presence or absence of water vapour. The corrosion mechanisms obtained in four different environments were also proposed.
Keywords:
copper corrosion; liquefied petroleum gas; H2S corrosion; SEM; XPS 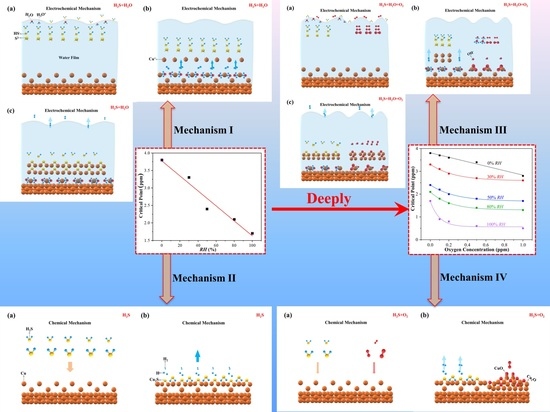 Copper sheets used in corrosion experiments were purchased from Fushun Keruisi Instrument Co., Ltd. Fushun Liaoning Province, China, which strictly follows the requirement of the ASTM standard [40]. The size of cuboid copper sheet is 75 mm × 12.5 mm × 3 mm, with the purity higher than 99.9%. Copper powder (analytical grade, Chengdu Kelon Chemical Co., Ltd. Chengdu, China) was used in X-ray photoelectron spectroscopy (XPS) and FTIR (Fourier transform infrared spectrometry). The purity of powder is 99.5% and the average particle size is 23 μm. The components of LPG are listed in Table 1. H2S and O2 gas used in the experiments were purchased from Zhengrong Gas company (Chengdu, China). The purity of H2S and O2 is 99.9%.

Copper corrosion tests were carried out according to the ASTM standard [40]. The copper sheet was first abrased with 65 μm silicon carbide sandpaper. Then, it was washed with isooctane. The copper surface was polished by 105 μm silicon carbide particles, which were operated with the assistance of isooctane-soaked degreasing cotton. The prepared copper sheets were suspended into the cylinder (the special closed container for corrosion test) in three parallel experiments. Then, high-purity N2 was used to remove the air inside the cylinder, by ventilating N2 into the cylinder to substitute the air. Then, to control the mass flow of LPG and H2S through a flowmeter (FMA5400A, Omega, San Antonio, TX, USA), they were injected into the cylinder and the gas was mixed evenly. Subsequently, the valve was fastened. Finally, the cylinder with mixture of LPG and H2S was vertically immersed in a water bath at a constant temperature (40 ± 0.5 °C) for 60 ± 5 min. After the experiment time was over, the liquid and gas in the cylinder were discharged. The copper sheets were taken out and compared with the standard colour plate [40]. Next, the corrosion grades of the copper sheets were evaluated. The details of the grade evaluation are shown in Table 2. The standard stipulates that if the corrosion level of a copper sheet reaches 2a and above, it is regarded as unqualified in corrosion.

3.1. Influence of Humidity on Copper Corrosion in H2S-Containing LPG

3.2. Synergistic Effect of Oxygen and Humidity on Copper Corrosion in H2S-Containing LPG

(a)
In the absence of water (0% RH), CP follows a linear relationship with O2 concentration. The fitted data obey Equation (2) as follows:

(b)
In the presence of water (30% RH), CP follows a negative exponential function with the O2 concentration. The fitted data obey Equation (3) as follows:

(c)
In the presence of water (50% RH), CP follows a negative exponential function with the O2 concentration. The fitted data obey Equation (4) as follows:

(d)
In the presence of water (80% RH), CP follows a negative exponential function with the O2 concentration. The fitted data obey Equation (5) as follows:

(e)
In the presence of water (100% RH), CP follows a negative exponential function with the O2 concentration. The fitted data obey Equation (6) as follows:

The corrosion mechanism of copper in LPG containing H2S + H2O is an electrochemical corrosion process. The corrosion process is carried out according to the reaction Equations (12)–(16). Figure 12 shows the schematic corrosion steps in LPG with H2S + H2O. The process of electrochemical corrosion can be explained by Figure 12a–c. Firstly, H2O exists in the form of a water film on the copper surface. H2S in LPG dissolves into the water film and further hydrolyses to form a great amount of HS−, H3O− (hydronium ions) and a small amount of S2−. Furthermore, the process of the anodic reaction is losing electrons of a Cu atom to form Cu2S with S2−, as expressed in Equation (15). The cathodic reaction can be undertaken as Equation (16), which is the traditional hydrogen depolarization reaction. At this time, the massive consumption of S2− further promotes the dissolution and hydrolysis of H2S in LPG, which continuously accelerates the corrosion of copper and results in a great amount of Cu2S precipitation. However, when the water film is insufficient (low humidity), it is difficult to form an effective electrochemical corrosion environment. In this circumstance, the chemical process may be the main reason for corrosion. This is consistent with the results of XRD, XPS and FTIR. A small amount of CuO in XPS and FTIR is likely due to the contamination of oxidization in air.

The corrosion mechanism of copper in LPG with H2S + O2 is a chemical corrosion process. The corrosion process is carried out according to Equations (10), (11) and (17)–(19). Figure 13 displays a schematic diagram of the corrosion process in LPG containing H2S + O2. In the first step, H2S and O2 molecules in LPG adsorb on the copper surface. Then, the chemical reaction of copper with H2S and O2 molecules generate Cu2S, H2 and Cu2O, respectively. Part of Cu2O is further oxidized to CuO by O2. The corrosion mechanism shows that the presence of only O2 will not significantly promote the corrosion grade of the copper sheet, which is consistent with the experimental results. In this condition, the peak of CuO does not appear in the XRD results. However, a small amount of CuO was detected in XPS, indicating that the content of CuO is quite low in corrosion products. With the FTIR spectrum, the amount of Cu2O is significantly more than CuO, which implies Cu2O is more stable than CuO.

The corrosion mechanism of copper in LPG containing H2S + H2O + O2 is an electrochemical corrosion process. The corrosion process is carried out according to the Equations (12)–(16) and (20)–(22). The electrochemical corrosion process can be illustrated by the schematic diagram in Figure 14. Firstly, H2O in LPG exists in the form of a water film on the copper surface. Two electrochemical reactions happen at the interface. The dissolution of H2S in the water film leads to the electrochemical reaction in Equations (12)–(16). Meanwhile, the dissolution and diffusion of O2 also cause another electrochemical corrosion reaction, as in Equations (20)–(22), which is the oxygen depolarization process. After H2S and O2 molecules in LPG dissolve into the water film to form H2S(l) and O2(l), H2S(l) is further hydrolysed into a large amount of HS−, H3O+ and a small amount of S2-. Cu loses electrons to form Cu2S and Cu2O with S2- and OH−, according to the anodic reaction of Equations (15) and (22) [46]. H3O+ and O2(l) obtain electrons from copper to form H2, H2O and OH−, which are regarded as cathode reactions (Equations (16) and (21)) [34,35,47]. Because the H3O+ in the water is consumed in large quantities, it is conducive to the ionization of water to move to the right to generate a large amount of OH−, which increases the pH of the water film. A large amount of OH− is not only conducive to the dissolution of H2S in LPG in the water film, improving the solubility of H2S, but is also conducive to the continuous hydrolysis of H2S(l) and HS− in the water film to form a large amount of HS− and S2−, which promotes the formation of lots of Cu2S precipitates. Thereby, the solubility of H2S in the water film is further increased to promote the corrosion of copper by H2S. Figure 14a–c are schematic diagrams of corrosion steps in LPG containing H2S + H2O + O2. Combined with the previous theoretical analysis and Figure 14, it is shown that when both O2 and H2O exist in LPG, the corrosion grade of copper will be significantly increased. A large amount of Cu2S and Cu2O will be generated, which is consistent with the previous experimental results of the synergistic effect of humidity and O2. Moreover, Cu2O is thermodynamically more stable than Cu2S (the standard free energies of formation at room temperature for Cu2O and Cu2S are −34.98 and −20.6 kcal/mole, respectively [27]), indicating that Cu2O is preferentially formed at the same conditions. Therefore, the amounts of corrosion products in Cu2O are more than Cu2S. This conclusion is consistent with the results of XRD and EDS. In addition, a large amount of Cu2O in XPS and FTIR also proves it.

In this paper, the influence of humidity and O2 on copper corrosion in H2S-containing LPG was studied. The corrosion products were characterized and analysed to reveal the corrosion mechanism. The following conclusions were obtained: 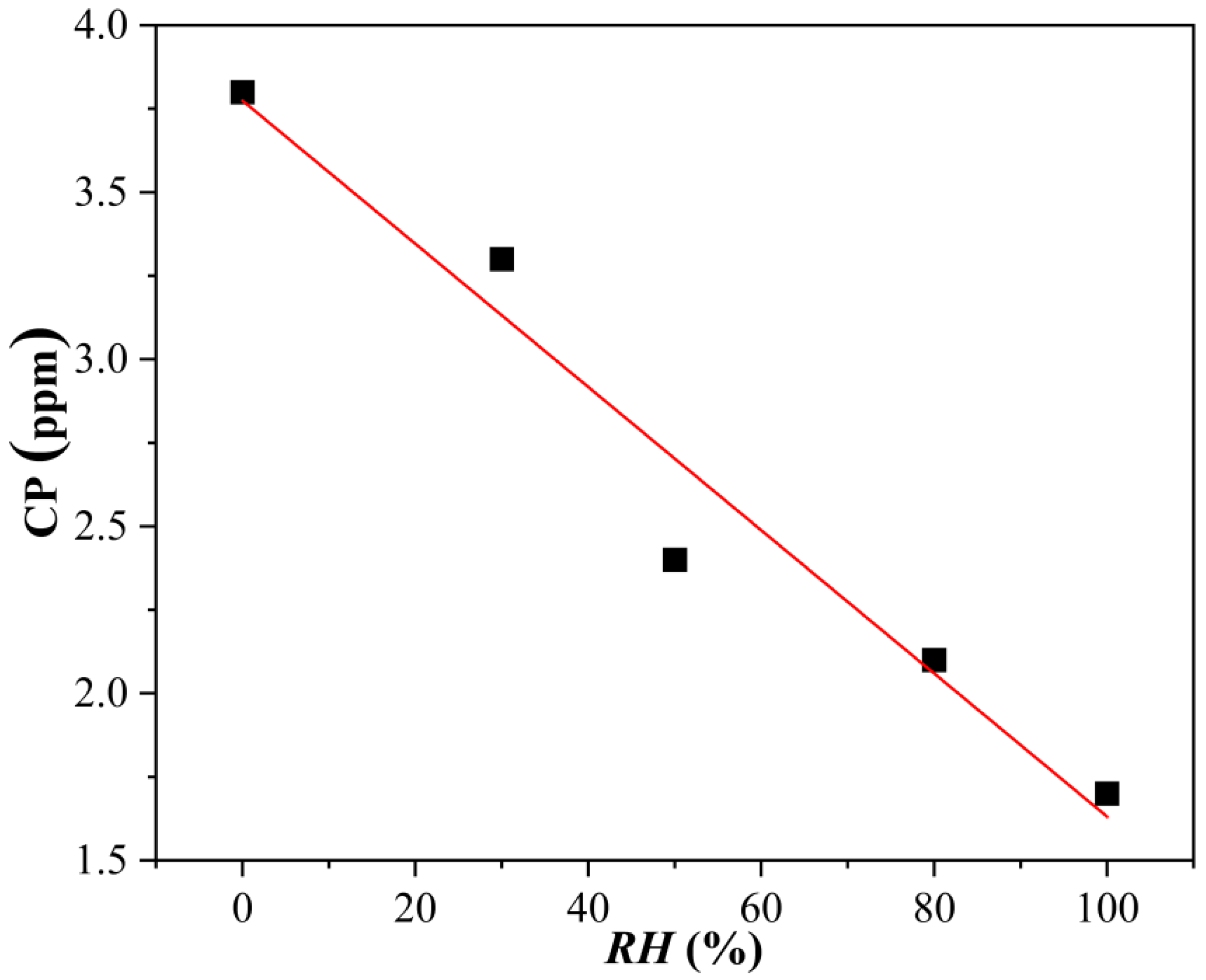 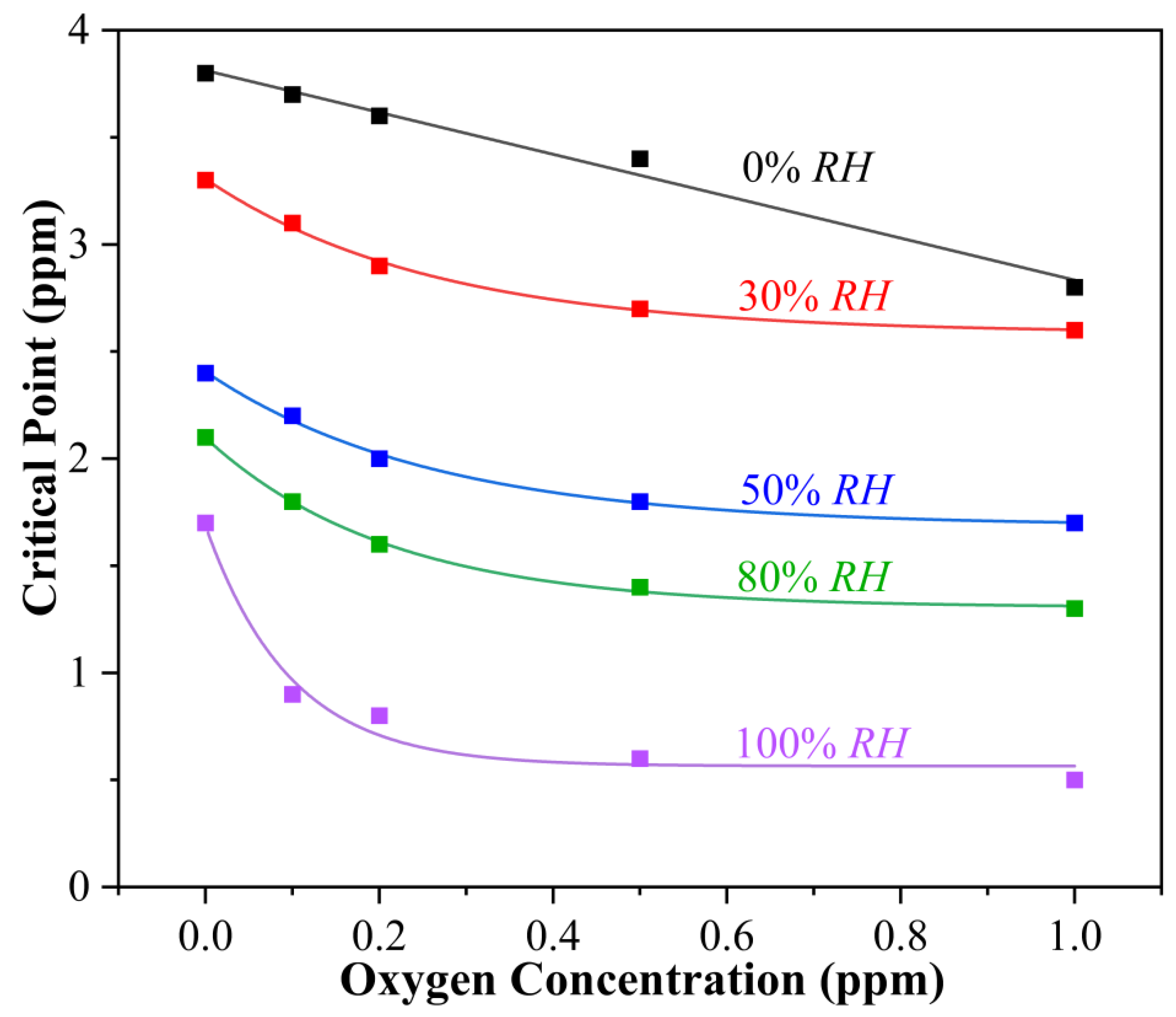 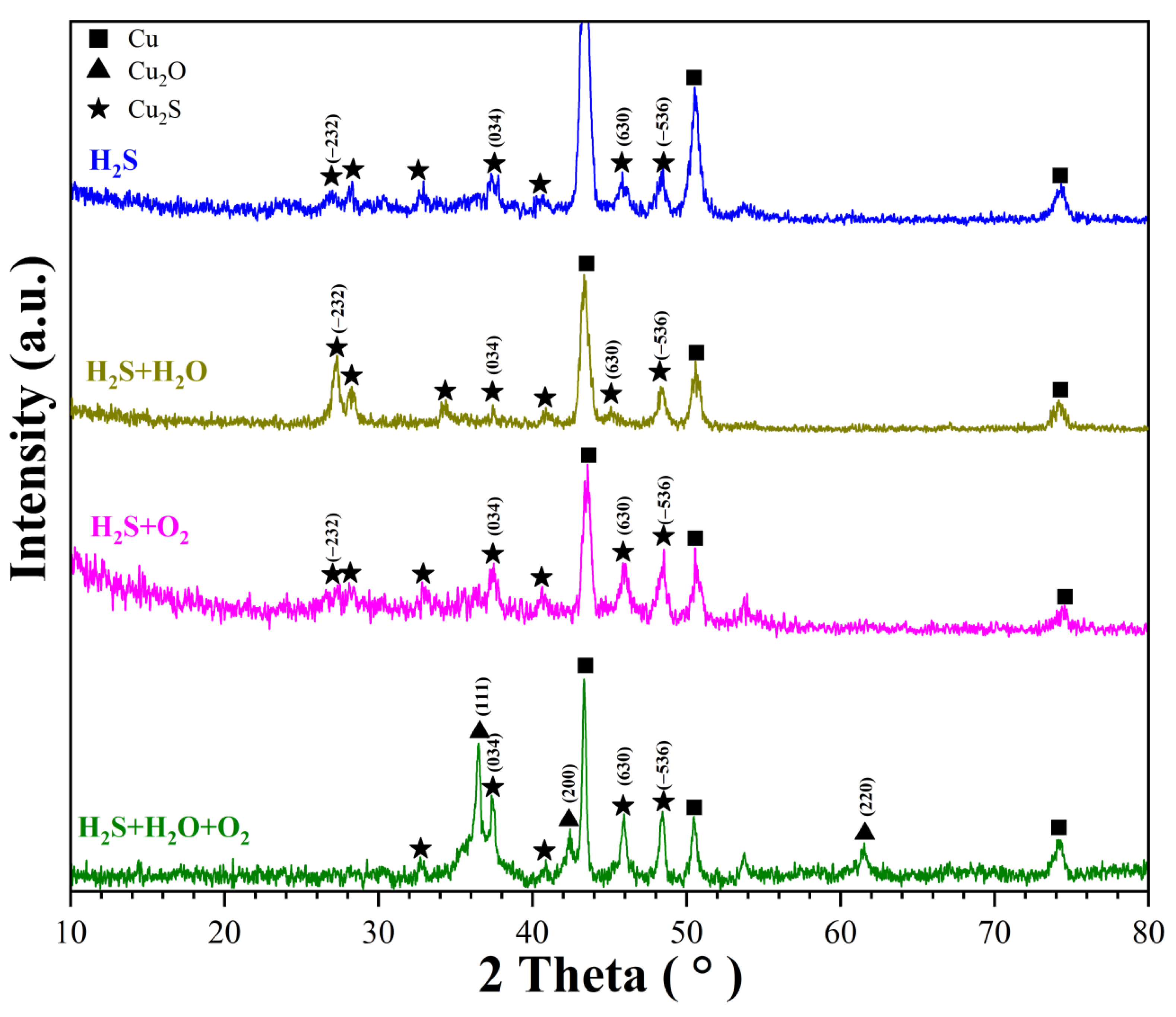 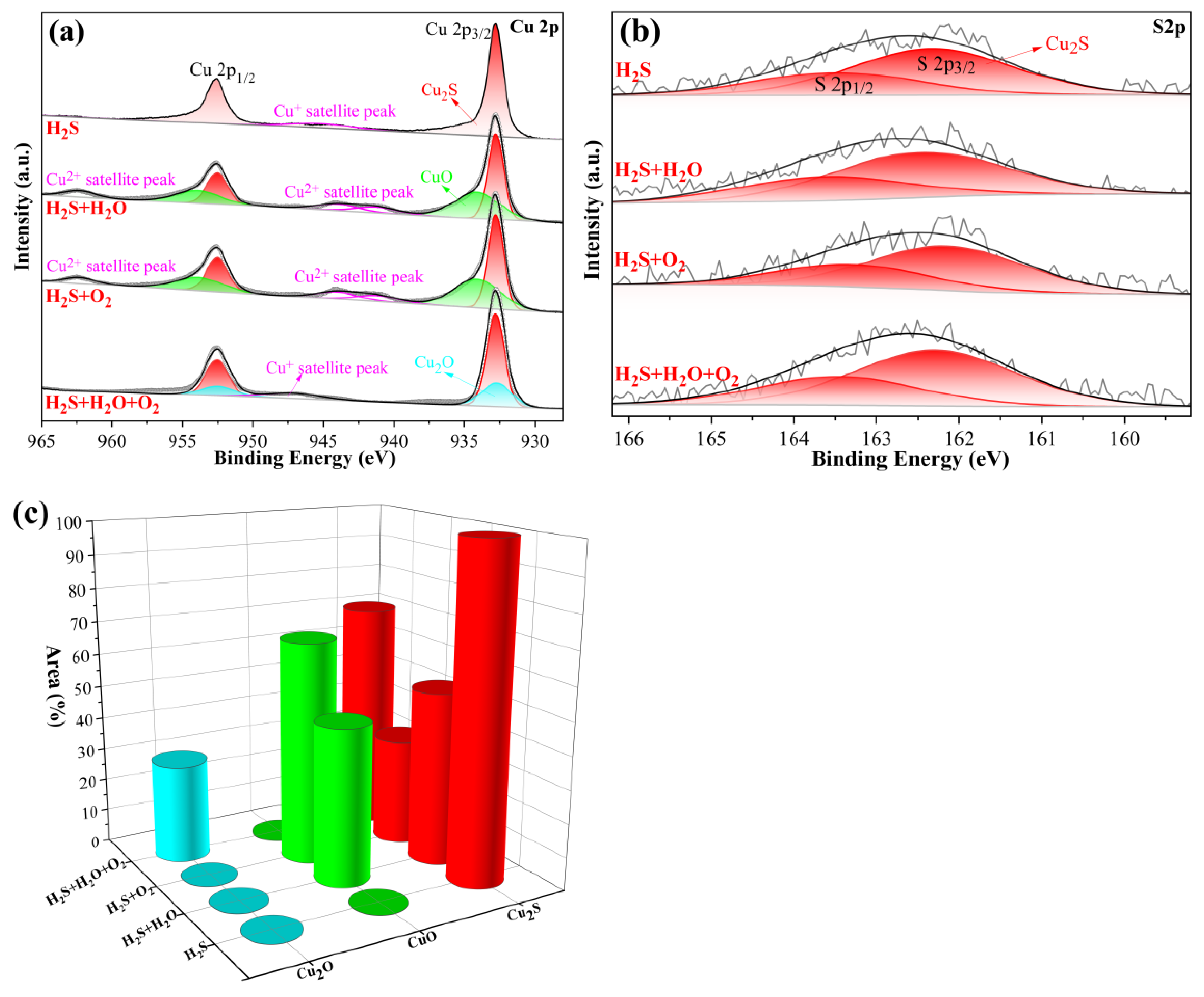 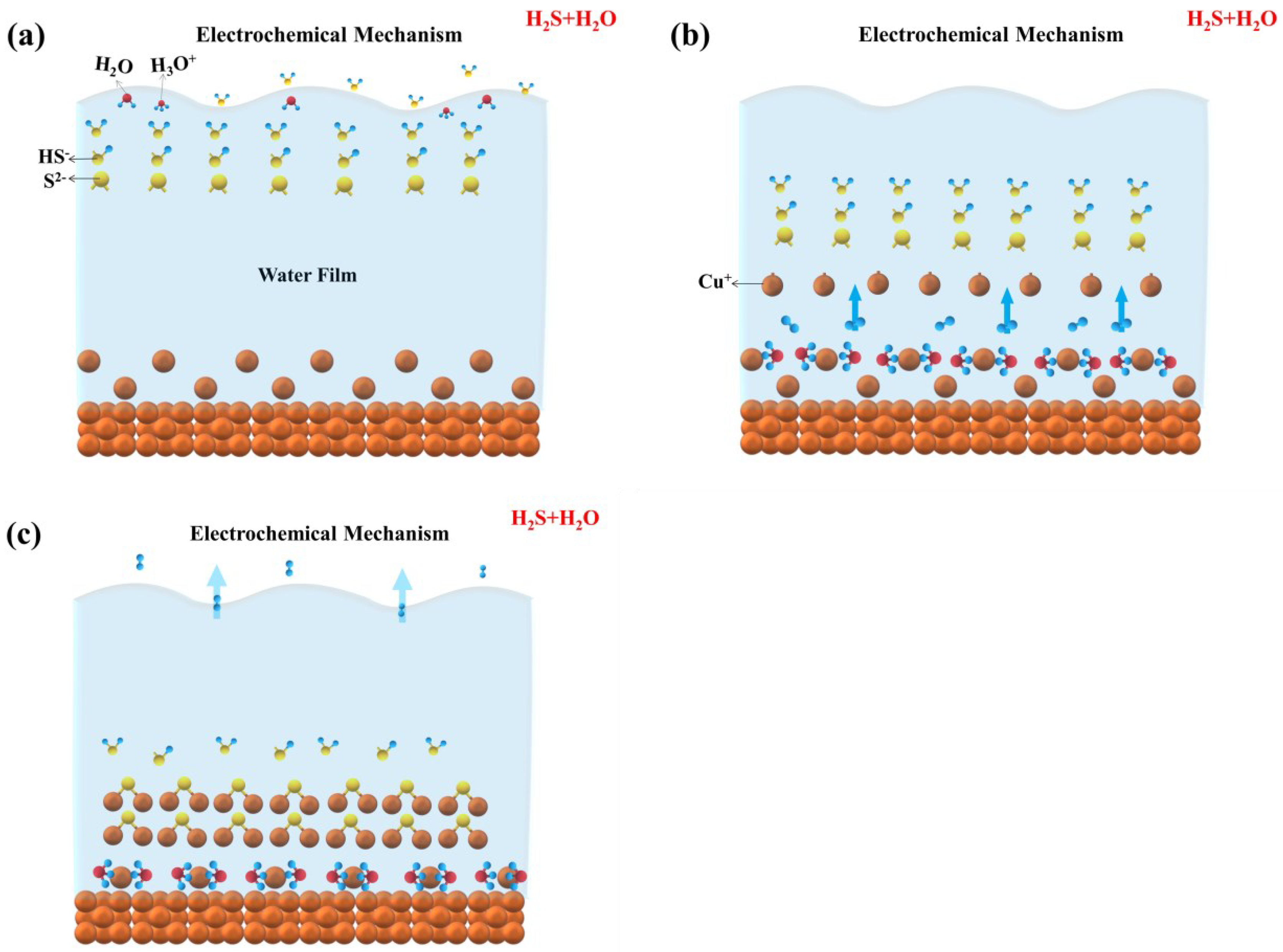 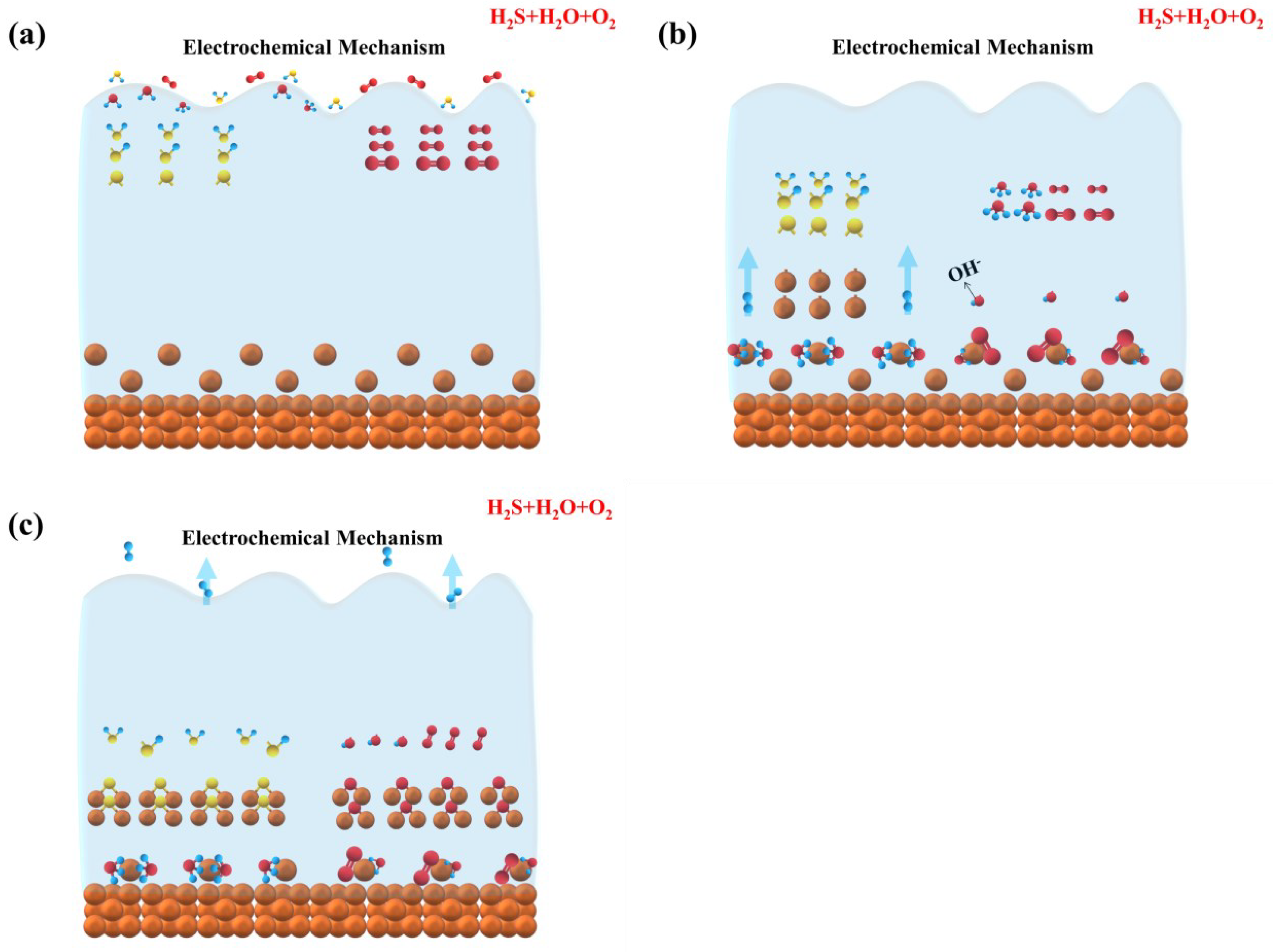