Vertical Jumping Tests versus Wingate Anaerobic Test in Female Volleyball Players: The Role of Age
Next Article in Special Issue

Kinematics and Kinetics of Youth Baseball Catchers and Pitchers

:
Abnormal scapulothoracic mechanics and scapulohumeral rhythm are implicated in shoulder pathologies, including glenohumeral impingement and rotator cuff tears. Upward scapula rotation, specifically asymmetry of scapula motion and associations of patterns through range with injury, was investigated in dominant and non-dominant limbs of nationally ranked junior and Paralympic swimmers during competition season. The static and throughout phases measures of upward scapula rotation were: Phase I (start position, 45°), Phase II (45° to 90°), Phase III (90° to 135°) and Phase IV (135° to max). Injury was assessed with a validated questionnaire. Differences between side (dominant and non-dominant), group (junior and Paralympic), and phase were examined. Significant differences (P < 0.05) between groups were identified for dominant side at rest, 45° and 135°, and in phases II and IV (including range). Scapulohumeral rhythm was higher in the non-dominant limb of Paralympic swimmers but in the dominant limb of junior swimmers. Greatest differences in upward rotation between injured and non-injured swimmers were found in Phase 1: 43.6% (3.3°) Paralympic; 73.1% (8°) junior. Results suggest asymmetry of movement in both limbs, through all phases, and at single points in range, should be investigated for assessing injury and developing preventive strategies and rehabilitation protocols.
Keywords:
dominant limb; non-dominant limb; asymmetry of motion; scapula; scapula upward rotation; injury; Paralympic swimmers

The scapula is vital in shoulder function and abnormal scapulothoracic mechanics and scapula–humeral rhythm have been implicated in shoulder pathologies, including glenohumeral impingement and rotator cuff tears. Knowledge of scapulothoracic movements is regarded as crucial in the development of preventative strategies and treatment programs in athletes with shoulder pathology [1]. In swimming, an athlete’s scapular musculature plays a pivotal role in stabilizing and preventing impingement because its continuous activation is required throughout the swim stroke [2]. Shoulder injuries have been reported in up to 90% of swimmers [3]. This high prevalence of injury in swimmers has been associated with the inability to maintain a fine balance between strength and instability, in combination with poor endurance of shoulder musculature [4]. These issues are further compounded when the asymmetry between the dominant and non-dominant arms of swimmers are compared [5,6,7]. Paralympic swimmers have reported the similar shoulder pain/injury issues as able-bodied swimmers [8], with a higher prevalence of upper limb injuries in wheelchair athletes [9]. The challenge for therapists is to accurately identify dysfunctional and/or pathological movement patterns [10], so that appropriate management strategies can be developed [11,12].
Scapula upward rotation is the dominant scapula action throughout shoulder elevation and has been previously implicated in the development of impingement [13,14]. However, inconsistencies exist in reporting the association between upward rotation and injury, particularly as recent literature supports impingement occurring below 90° abduction [11,15]. For example, some studies have found an increase upward rotation in symptomatic subjects [16], other research a decrease [17], or no difference [18,19]. This variation may be accounted for by the measurement protocols adopted, as well as the population size and type, for example, athlete versus non-athlete. To better understand this scapulothoracic relationship, the aim of this study was to investigate upward scapula rotation in two distinct swimming populations, with particular interest in asymmetry of scapula motion and associations of patterns through range with injury.

Human ethics approval was obtained prior to recruitment of participants. Forty-four athletes (22 nationally ranked junior athletes and 22 Paralympic athletes) were tested. Both groups consisted of 11 males and 11 females, and both limbs were tested in each athlete (grouped by arm dominance). The average number of years of athletes’ involvement in competitive swimming was 6 years (SD 2.6) in the junior group and 8 years (SD 3.2) in the Paralympic group. For the Paralympic group the IPC swimming class (and impairment) demographics were: S6 (short stature [3]); S7 (cerebral palsy [2], leg amputee [1]); S8 (cerebral palsy [3], leg amputee [2]); S9 (leg amputee [3], arm amputee [3]); S10 (cerebral palsy [4], arm amputee [1]). All participants were tested during the competition phase of the season. Participants were excluded if they had congenital deformity of the scapula or thorax, or had a history of trauma, fracture or surgery of the shoulder girdle.

2.2. Measures of the Shoulder

Two inclinometers (Plurimeter-V gravity referenced inclinometers, Fabrication, White Plains, New York, NY, USA) were used to measure upward scapula rotation, as described previously [20]. A standardized, reliable protocol was followed [21]. Reliability tests were conducted one hour apart and during three consecutive days, producing an Intraclass Correlation Coefficient of 0.95, which was similar to previous studies [22]. One examiner experienced with the use of inclinometers completed all measurements.
The inclinometers measured total shoulder abduction, which involved both glenohumeral and scapula motion within the coronal plane. Measurement required full elbow extension and neural wrist flexion and extension with the thumb leading to ensure consistent vertical alignment. The humeral inclinometer was fixed to the shaft of the humerus with Velcro straps and measured the position of humeral elevation. The scapula inclinometer was aligned along the spine of the scapula and measured upward scapula rotation. Three trials were conducted for each measure and the average score calculated.
The humeral inclinometer was fitted and checked, centered to zero and aligned so the face of the Plurimeter was vertical. The base of the scapula inclinometer was aligned along the spine of the scapula, as per previous protocols [20]. The actual resting position of each participant’s humerus relative to the vertical was recorded. Each participant performed a dynamic warm-up with arm-circles for 1 to 2 min. The participant was then asked to externally rotate the arm so that both resting humeral and scapula angles could be measured. Next, the participant was asked to move the arm through the arc of abduction, stopping at 45°, 90°, 135° and maximum shoulder abduction. The point at which motion paused for measurement was determined by the examiner with the humeral inclinometer, and resulted in five positions of abduction. At each position of abduction, the static angle of scapula upward rotation was recorded with the scapular inclinometer. The side measured was randomized and the examiner did not communicate the test results to the participant. Upward rotation was divided into four phases: Phase I (start position of 45°), Phase II (45° to 90°), Phase III (90° to 135°) and Phase IV (135° to max). By dividing the arc of motion into the four phases, the linearity of movement could be determined.
The scapulohumeral rhythm is calculated as a ratio, essentially dividing the glenohumeral elevation or abduction angle by the scapulothoracic angle (amount of upward scapula rotation). This ratio provides information about the scapula rotation, and may indicate muscle imbalance and be related to injury [17].
Shoulder pain (or injury) was defined as an incident (or occurrence) that required altered training, or rest from training, for a week or more. The swimmers who reported a change in their training of a week or more, due to pain or injury, were placed in the injury group as shown in Table 1.

Means, standard deviations and 95% Confidence Intervals were calculated for all descriptive parameters of upward rotation. Differences between side (dominant and non-dominant), group (junior and Paralympic), and phase were examined with combinations of two-way ANOVA (P < 0.05). To provide a practical or clinical measure of any differences between these variables effect statistics were measured using Cohen’s d [23]. Both the raw difference (measured in degrees) and percentage difference were calculated so that the differences between injured and non-injured subgroups could be determined.
Table 1. Effect statistics comparing upward rotation measures throughout the phases of movement for injured and non-injured subgroups in junior and Paralympic groups.
Note: Values are expressed as mean (95% CI). 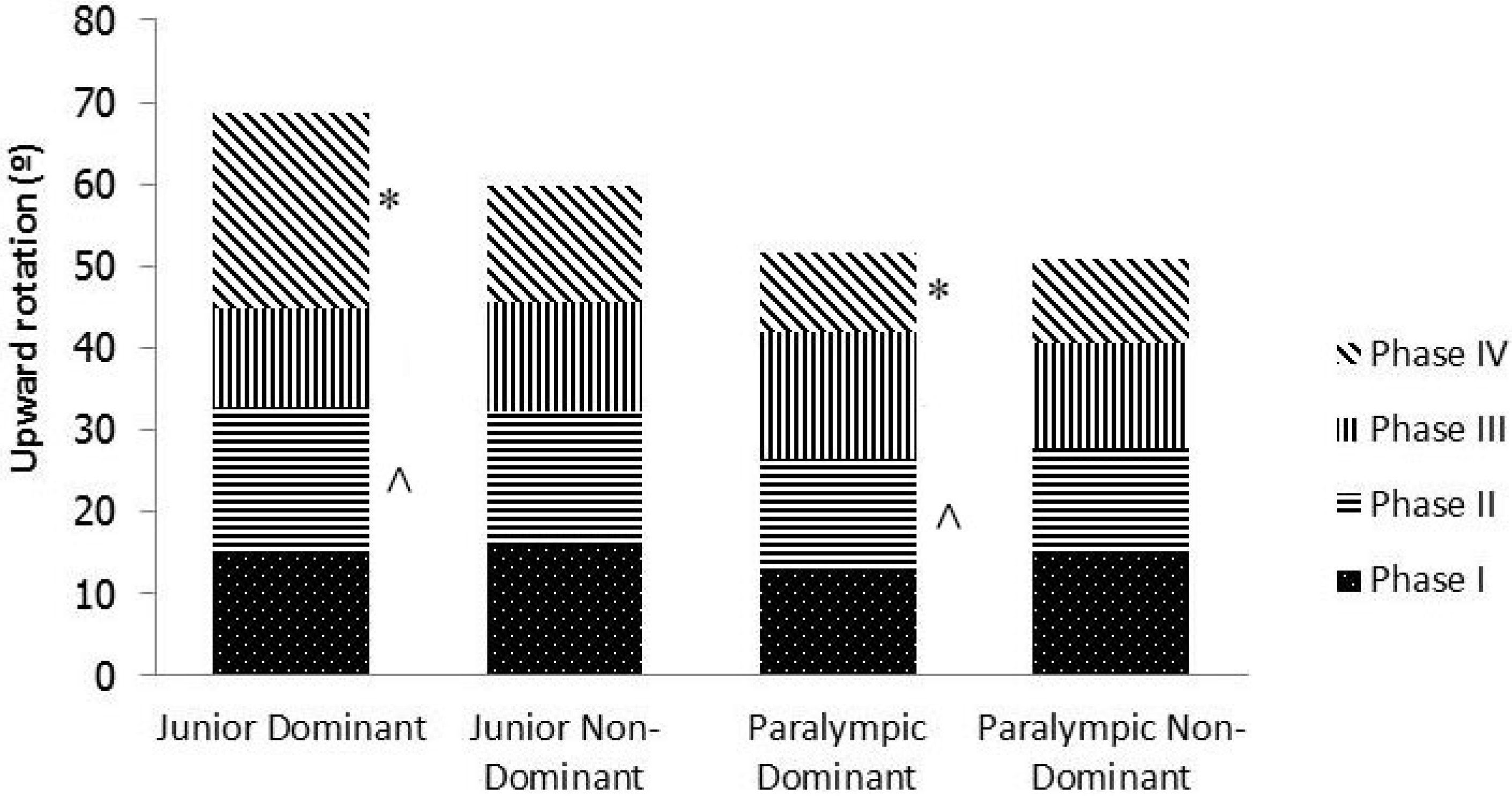 To enable an improved understanding of scapula upward rotation, asymmetry of the movement should be investigated through all phases of range, rather than at a single point in range. The phase of movement and comparison with the contra side should be considered in order to determine whether the movement is actually dysfunctional and is related to injury, or is a compensatory strategy signifying weakness of the force couple through range.
The determination of what is normal on an individual athlete basis (especially for Paralympic athletes) may be required for optimum interpretation of results, and to enable the clinician to understand asymmetry and its consequences. In addition, exact movement dysfunction must be determined to develop effective rehabilitation protocols.