The Role of (E)-2-octenyl Acetate as a Pheromone of Bagrada hilaris (Burmeister): Laboratory and Field Evaluation
Next Article in Special Issue

Influence of Temperature on the Interaction for Resource Utilization between Fall Armyworm, Spodoptera frugiperda (Lepidoptera: Noctuidae), and a Community of Lepidopteran Maize Stemborers Larvae

Influence of Temperature on Age-Stage, Two-Sex Life Tables for a Minnesota-Acclimated Population of the Brown Marmorated Stink Bug (Halyomorpha halys)

Temperature is a critical single factor influencing insect population dynamics, and is foundational for improving our understanding of the phenology of invasive species adapting to new agroecosystems or in the process of range expansion. An age-stage, two-sex life table was therefore developed to analyze fundamental demographic features such as development, survival, and reproduction of a Minnesota-acclimated population of the invasive brown marmorated stink bug (Halyomorpha halys), in the north central USA. All salient life history parameters were estimated to better understand the population growth potential of H. halys at the current limit of its northern range in North America. We examined the effect of selected constant temperatures on immature development and survival (15–39 °C), adult reproduction and longevity (17–36 °C) of H. halys in the laboratory. The Minnesota population developed faster and survived at higher rates relative to a population that had previously established in Pennsylvania, USA. Mean generation time for the Minnesota population was minimized at 30 °C, while survival and fecundity were maximized at 27 and 23 °C, respectively. Given these findings, we assessed the effect of temperature on the intrinsic rate of increase (), the life table parameter that integrates the effects of temperature on development, survival, and reproduction. A Ratkowsky model predicted was maximized (0.0899) at 27.5 °C. We discuss the implications of our findings for understanding population growth rates for H. halys in the context of a warming climate, and potential to emerge as a serious crop pest in the Midwest U.S. region. View Full-Text
Keywords: brown marmorated stink bug; temperature; development; intrinsic rate of increase; thermal optimum; age-stage two-sex life tables brown marmorated stink bug; temperature; development; intrinsic rate of increase; thermal optimum; age-stage two-sex life tables
►▼ Show Figures 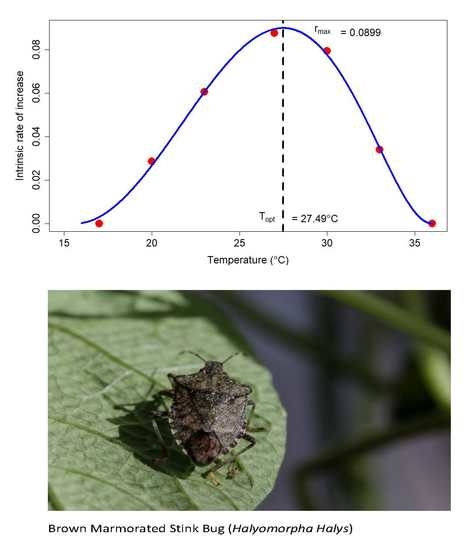