The primary objective of the study was to compare the performance of 3D-RWC-TVS and CTC in the diagnosis of rectosigmoid endometriosis. The secondary objectives were to compare the precision of the two techniques in estimating the length (mid-sagittal diameter) of the intestinal nodules, the presence of multifocal disease (presence of one or more lesions affecting the sigmoid colon that are associated with a colorectal primary lesion) and the distance between the lower margin of the nodules and the anal verge.
This was a prospective study performed between March 2017 and September 2019. Subjects of the study were recruited among patients referred to our institution because of pain and intestinal symptoms suggestive of rectosigmoid endometriosis. Some patients had histological diagnosis of pelvic endometriosis during previous surgery. Previous surgical diagnosis of intestinal endometriosis, previous radiological diagnosis of intestinal endometriosis (based on MR or double-contrast barium enema), history of colorectal surgery (except appendectomy), contraindications to bowel preparation or CTC (such as non-compliant patients), previous bilateral ovariectomy, or psychiatric disorders were exclusion criteria for this study.
Study patients underwent 3D-RWC-TVS performed by an ultrasonographer highly skilled in the diagnosis of deep endometriosis. CTC was done within the following three months by a radiologist expert in the diagnosis of deep endometriosis, blinded to the results of the previous ultrasonographic exam.
As described in the consensus opinion from the International Deep Endometriosis Analysis (IDEA) group, intestinal nodules located below the level of the insertion of the uterosacral ligaments on the cervix were defined as “anterior lower rectal nodules”, those above this level were defined as “anterior upper rectal nodules”, those at the level of the uterine fundus were defined as “rectosigmoid junction nodules” and those above the level of the uterine fundus were defined as “anterior sigmoid nodules” [6]. Bowel stenosis was defined as a reduction in lumen, by measuring the smallest stricture diameter and comparing it with the closest healthy bowel lumen diameter.
Patients underwent surgery within six months from the performance of 3D-RWC-TVS. The results of CTC and 3D-RWC-TVS were compared with surgical and histological findings.
The local ethics committee approved the study protocol (CE2439PRNO161219-24/2020). Patients participating in the study provided written informed consent. This study was registered in Clinicaltrial.gov (NCT04295343).

A sonographer (S.F.) with extensive experience in the diagnosis of intestinal endometriosis (>500 exams every year) performed all the exams. 3D-RWC-TVS was performed by Voluson E6 and E10 machines equipped with transvaginal transducers (GE Healthcare Ultrasound, Milwaukee, WI, USA). Patients received a rectal enema (133 mL of monobasic sodium phosphate anhydrous; Clisma Lax; Sofar, Milan, Italy) a few hours before TVS. A total of 300–400 mL of saline solution was employed to distend the rectosigmoid under ultrasonographic control, by using a catheter connected to a 100 mL syringe introduced in the anus [14,28].
During the ultrasonographic scan, acquisitions of images by 3D rendering were made in the sagittal and coronal planes. Two specific quality enhancement tools (GE Healthcare Ultrasound, Milwaukee, WI, USA) were applied during 3D rendering: advanced Speckle Reduction Imaging (SRI), which helps heighten the visibility of lesions with high-definition contrast resolution and CrossXBeamCRITM, which improves the enhancement of tissue and border differentiation. On the 3D rendering, rectosigmoid lesions typically appear as spiculated lesions with a retracting line all around the nodule (Figure 1) [18]. Multiple acquisitions were performed to characterize the endometriotic nodules, in particular, measuring their largest diameter and their distance from the anal verge. When the volume acquisition was completed, the data file was sent via Digital Imaging and Communication in Medicine (DICOM) to a personal computer and stored in order to be analysed by the use of an appropriate software (4Dview 5.0; GE Healthcare Ultrasound, Milwaukee, WI, USA). All the acquisitions were examined by another sonographer who has performed over 1000 analysis of 3D imaging related to deep endometriosis in his life (F.B.). This sonographer was blinded to the results of the 2D-RWC-TVS. For estimating the stenosis, at least three measurements of the diameter of rectosigmoid lumen were performed above and below the nodule (mean of all measurements) in a healthy bowel; close to the nodule surface, at least one measurement every 5 mm was performed (mean of the three lower measurements).

Patients underwent a low residue diet and a liquid diet on the three days before and in the 24 h before CTC, respectively. On the afternoon and the evening of the day before the exam, the patients had an intestinal preparation, which consisted in sodium picosulfate (10.0 mg), light magnesium oxide (3.5 g) and anhydrous citric acid (10.97 g) (CitraFleet, CasenRecordati SL, Zaragoza, Spain). Patients were asked to drink a dose of diatrizoatemeglumine and diatrizoate sodium solution (Gastrografin; Schering, Berlin, Germany) diluted 1:1 with tap water at 6 p.m. on the day before the exam.
A radiologist (E.B.) with extensive experience in the diagnosis of intestinal endometriosis (>500 exams every year) performed all the exams.
The scans were performed by using a 64-section multidetector CT scanner (LightSpeed, GE Healthcare, Milwaukee, WI, USA) according to a standardized protocol [27]. A 12F Foley catheter was introduced into the distal rectum before the scan on the CT bed, and 2.5–3 L of room air were introduced in the colon, calculating the same number of manual pomp inflations in all the distensions. The patients were scanned in the supine and prone positions. No intravenous injection of iodinated contrast medium was employed. The abdomen was scanned as in conventional CTC performed for rectal cancer screening.
The DLP (dose length product) of CTC depended on the length of the abdominal surface of the women that is related to her height. The estimated radiation dose was in the range of 6 mSv. The adaptive statistical iterative reconstruction (ASIR; GE Healthcare) was used to decrease the x-ray dose without a significant loss of image quality.
A weight-based automated tube-current modulation technique was employed with a tube current range of 130–150 mA for patients weighing less than 70 kg in order to decrease the effective radiation dose (abdominal volume acquisition wCTDi = 6–7 mSv). Collimation was 1.25 mm with a helical pitch of 1.375; the reconstruction interval (overlap) was 1 mm. The raw data were transferred to a workstation having a dedicated CTC software package (General Electric ADW 4.2.4, General Electric Medical System, Milwaukee, WT, USA).
Post-processing image editing was performed, being the scans evaluated by various reconstructions: the 3D endo-luminal FT and virtual dissection reconstructions allowed for the visualization of the lumen of the rectum, sigmoid, and the other parts of the colon. 3D images were always used in case of problem solving; the diagnosis was performed on the basis of axial images and multiplanar reconstructions (MPRs).
Rectosigmoid endometriotic nodules appear on CTC as strictures usually involving a variable part of the circumference of the bowel wall (Figure 1); the site of these findings is constant on both the supine and prone scans and stenosis may be highlighted by the 3D endo-luminal FT reconstructions (Figure 2). The MPRs sometimes allow for the detection of a transmural involvement of the endometriotic nodule [27].
For estimating the stenosis, at least one measurement of the diameter of rectosigmoid lumen was performed every 10 mm in the 50 mm above and below the nodule (mean of all measurements) in healthy bowel; on the nodule surface, at least one measurement every 5 mm was performed (mean of the three lower measurements).

After each exam, the intensity of the pain perceived was rated by each patient by using a 100-mm visual analogue scale (VAS) scale. Furthermore, patients were asked to qualitatively rate the discomfort perceived during the exam by a 5-point Likert scale (very tolerable, tolerable, neutral, painful, very painful).

The surgeons were aware of the findings of the 3D-RWC-TVS and CTC. A team of gynecological and colorectal surgeons performed all the procedures by laparoscopy. The rectosigmoid nodules were excised by shaving (excision of the nodule with cold scissor or monopolar hook without entering the intestinal lumen), discoid excision (removal of the nodule with opening of the intestinal wall and suture of the bowel) or by segmental bowel resection. The retrieval of surgical specimens was done through laparoscopic accesses by using an endo-bag (the laparoscopic accesses may have been enlarged in case of large specimen). The morcellation of surgical specimens was always avoided. During laparoscopy, the distance between the main rectosigmoid endometriotic nodule and the anal verge was estimated by introducing a 20-F soft rectal catheter within the rectum up to the level of the intestinal lesion. In case of laparoscopic shaving, a rectal probe was employed for exposing better the endometriotic lesion. In patients who underwent segmental bowel resection, the stenosis of bowel lumen caused by endometriosis was evaluated.

Accuracy, sensitivity, specificity, positive predictive value (PPV) and negative predictive value (NPV) were evaluated for 3D-RWC-TVS and CTC. The diagnostic value of each technique was also assessed by calculating the positive likelihood ratio and negative likelihood ratio. Efficacy parameters were calculated with 95% confidence intervals (CIs). The accuracy of 3D-RWC-TVS and CTC in the diagnosis of intestinal endometriosis was compared by using the McNemar’s test with the Yates continuity correction. The precision of the measurements of nodule size and distance from the anal verge by imaging techniques was calculated by subtracting the size of the nodule, as measured by the imaging techniques, from the size of the nodule, as measured at histology. The limits of agreement were calculated as mean difference ± 2 standard deviations of the difference. Correlations between nominal categories were estimated by phi coefficient. The normality of distribution of continuous variables was evaluated by the Kolmogorov–Smirnov normality test. The pain intensity experienced by the patients during both exams was evaluated by the nonparametric Mann–Whitney test. The data were analyzed using the SPSS software version 24.0 (SPSS Science, Chicago, IL, USA). p values < 0.05 was considered statistically significant.

3.1. Characteristics of the Study Population

Table 1 shows the demographic characteristics and Supplementary Table S1 presents the main symptoms complained by the study population. Out of the 68 women included in the study, 37 (48.9; 95% C.I. 38.2–59.7%) had rectosigmoid nodules and underwent bowel surgery. The main nodules were located on the sigmoid in 16 (43.2%) patients, on the rectosigmoid junction in four (10.8%) patients, on the upper rectum in 10 (27.0%) patients and on the lower rectum in seven patients (18.9%). Twelve patients (32.4%) underwent shaving of the colorectal nodules; nine (24.3%) underwent discoid excision; 16 patients (43.2%) underwent segmental colorectal resection; in this last group of patients, the mean (± SD) length of the resected bowel specimen was 11.5 ± 1.9 cm. Concerning the depth of infiltration of endometriosis in the intestinal wall, at histology, the disease infiltrated only the muscularis mucosae in 33 patients (75.0%), the submucosa in eight patients (18.2%) and the mucosa in three patients (6.8%). Seven patients (15.9%) had multifocal disease.

3.2. Diagnostic Performance of 3D-RTW-TVS and CTC

In conclusion, 3D-RWC-TVS and CTC can be used to screen the presence of rectosigmoid endometriosis, as they have comparable diagnostic accuracy. However, we deem that symptomatic patients in case of negative findings at 3D-RWC-TVS and patients undergoing surgery should also be investigated using other techniques, aiming to study the presence of sigmoid or upper intestinal nodules. Nevertheless, CTC should not be considered as an alternative to TVS or MR, because these imaging techniques provide a better assessment of deep pelvic endometriosis, ovarian endometriotic cysts, and uterine adenomyosis. In this perspective, CTC may be combined with 3D-RWC-TVS because of the high diagnostic performance in detecting rectosigmoid endometriosis and the ability to diagnose endometriotic nodules located above the sigmoid.

The following are available online at https://www.mdpi.com/2075-4418/10/4/252/s1, Table S1: Presence and intensity of pain and intestinal symptoms in the study population (n = 68), Table S2: Diagnostic performance of 3D-RWC-TVS and CTC in the diagnosis of multifocal rectosigmoid endometriosis. 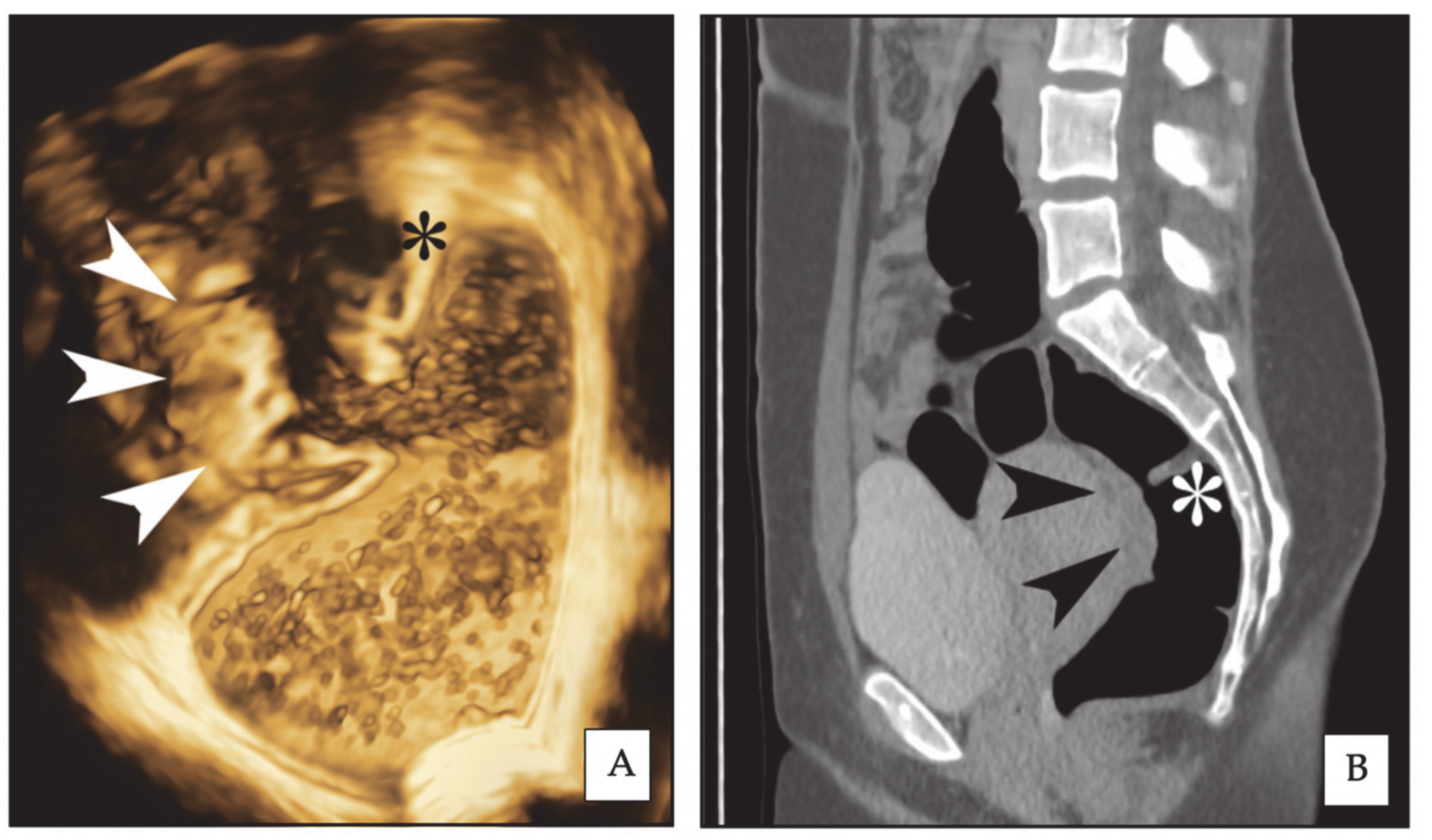 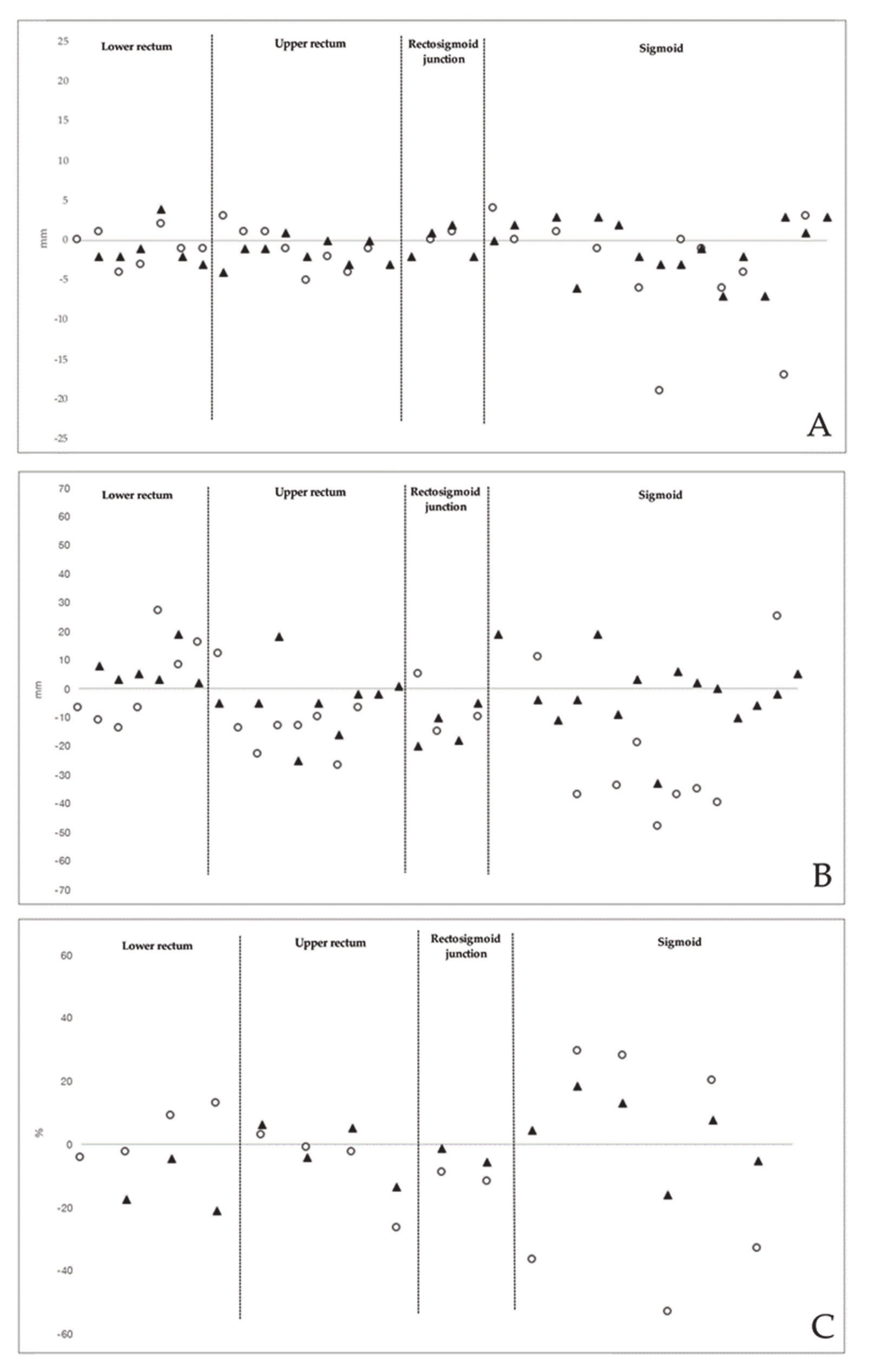