Formation of Fe- and Mg-Rich Smectite under Hyperalkaline Conditions at Narra in Palawan, the Philippines
Previous Article in Journal

Effect of Dissolved Silica on Immobilization of Boron by Magnesium Oxide

Elevated antimony concentrations in aqueous environments from anthropogenic sources are becoming of global concern. In this respect iron oxides are known to strongly adsorb aqueous antimony species with different oxidation states, but the effect of silica on the removal characteristics is not well understood despite being a common component in the environment. In this study, ferrihydrite was synthesized at various Si/Fe molar ratios to investigate its adsorption and co-precipitation behaviors with aqueous antimony anionic species, Sb(III) and Sb(V). The X-ray diffraction analyses of the precipitates showed two broad diffraction features at approximately 35° and 62° 2θ, which are characteristics of 2-line ferrihydrite, but no significant shifts in peak positions in the ferrihydrite regardless of the Si/Fe ratios. The infrared spectra showed a sharp band at ~930 cm−1, corresponding to asymmetric stretching vibrations of Si–O–Fe bonds which increased in intensity with increasing Si/Fe molar ratios. Further, the surface charge on the precipitates became more negative with increasing Si/Fe molar ratios. The adsorption experiments indicated that Sb(V) was preferentially adsorbed under acidic conditions which decreased dramatically with increasing pH while the adsorption rate of Sb(III) ions was independent of pH. However, the presence of silica suppressed the adsorption of both Sb(III) and Sb(V) ions. The results showed that Sb(III) and Sb(V) ions were significantly inhibited by co-precipitation with ferrihydrite even in the presence of silica by isomorphous substitution in the ferrihydrite crystal structure. View Full-Text
Keywords: antimony; ferrihydrite; silica; adsorption; co-precipitation antimony; ferrihydrite; silica; adsorption; co-precipitation
►▼ Show Figures 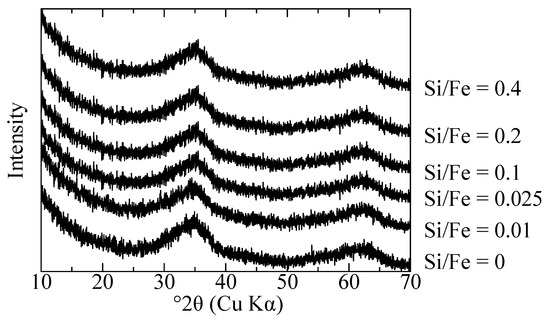