Petrogenesis of the Snezhnoe Ruby Deposit, Central Pamir
Next Article in Special Issue

A less harmful approach for the environment regarding chalcopyrite concentrate leaching, using seawater/brine and caliche’s salts as a source of chloride and nitrate ions, was investigated. Different variables were evaluated: sulfuric acid concentration, sodium nitrate concentration, chloride concentration, source of water (distilled water, seawater, and brine), temperature, concentrate sample type, nitrate source (analytical grade and industrial salt), and pre-treatment methods in order to obtain maximum copper extraction. All tests were performed at moderate temperatures (≤45 °C) and atmospheric pressure. The leaching system using distilled water, seawater, and brine base media resulted in copper extraction of 70.9%, 90.6%, and 86.6% respectively. The leaching media, with a concentration of 20 g/L Cl−, obtained a maximum Cu extraction of 93.5%. An increase in the concentration of H2SO4 and NaNO3 from 0.5 to 0.7 M, led to an increase in the copper extraction. The use of an industrial salt compared to the analytical salt did not show great variations in the percentage of extraction achieved, which would be a good and cost effective alternative. The increase in temperature from 25 to 45 °C showed a great effect on the copper leaching (of 60% until 90.6%, respectively). The pre-treatment is suggested to increase copper extraction from 60.0% to 71.4%. View Full-Text
Keywords: chalcopyrite leaching; seawater; industrial brine; caliche’s salts; chloride; nitrate chalcopyrite leaching; seawater; industrial brine; caliche’s salts; chloride; nitrate
►▼ Show Figures 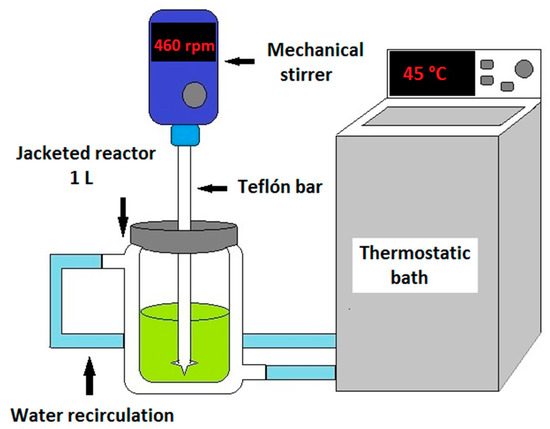