Clay Minerals and Element Geochemistry of Clastic Reservoirs in the Xiaganchaigou Formation of the Lenghuqi Area, Northern Qaidam Basin, China

Near-surface diagenesis has been studied in the Langhian siliciclastic rocks of the Montjuïc Hill (Barcelona Plain) by means of petrographical (optical and cathodoluminescence) and geochemical (electron microprobe, δ18O, δ13C, δ34S and 87Sr/86Sr) analyses. In the hill, these rocks are affected by strong silicification, but the same unit remains non-silicified at depth. The results reveal that fracturing took place after lithification and during uplift. Fracture cementation is clearly controlled by the previous diagenesis of the host rock. In non-silicified areas, cementation is dominated by calcite, which precipitated from meteoric waters. In silicified areas, fractures show multiepisodic cementation produced firstly by barite and secondly by silica, following the sequence opal, lussatite, chalcedony, and quartz. Barite precipitated only in fractures from the mixing of upflowing seawater and percolating meteoric fluids. The presence of silica stalactites, illuviation, and geopetal structures, and δ18O values indicate that silica precipitation occurred in the vadose regime from low-temperature percolating meteoric fluids, probably during a glacial period. Moreover, the presence of alunite suggests that silica cement formed under acidic conditions. Karst features (vugs and caverns), formed by arenisation, reveal that silica was derived from the dissolution of surrounding silicified host rocks. View Full-Text
Keywords: silicification; meteoric diagenesis; fractures; deltaic sequence; karst; glacial period silicification; meteoric diagenesis; fractures; deltaic sequence; karst; glacial period
►▼ Show Figures 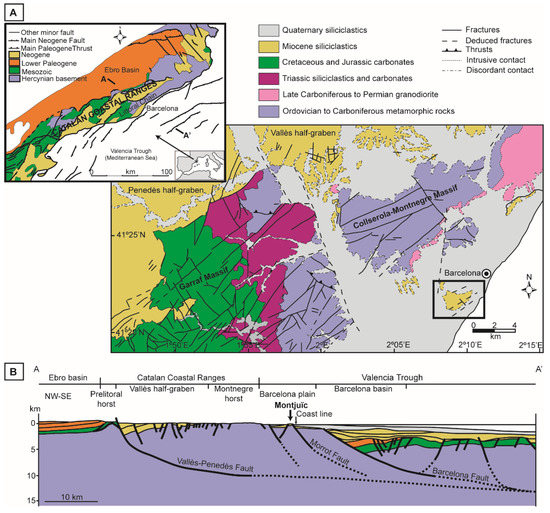