From Symmetry to Asymmetry: The Use of Additional Pulses to Improve Protection against Ultrashort Pulses Based on Modal Filtration

The population of our planet is gradually increasing and has already exceeded 7 billion people. The information needs of the population are growing; at the same time, new technologies such as the Internet of Things (IoT), intelligent transport systems (such as Vehicular Ad hoc Network (VANETs)) and virtual and augmented reality are actively developing [1]. The growth of data traffic and device connections will require data rates to increase by more than an order of magnitude [2]. Responding to these requests, the International Telecommunication Union (ITU) decided to develop a new generation of 5G wireless communications with high transmission speeds (>10 Gbit/s) and ultralow response times (<1 ms). However, an increase in the transmission date rate is mainly possible due to the expansion of the band that the frequencies use. The requirements for 5G networks can only be implemented in the millimeter-wave frequency range [3].
The advantages of millimeter waves (mm-waves) when used for radio communications have been well known for many years [4]. The advantageous features of millimeter-wave radio waves are responsible for their widespread use in radar systems, remote sensing, navigation and communications. Interest in millimeter waves has increased due to the need to expand the radio frequency spectrum for commercial applications. Compared with previous generations, mm-wave 5G wireless communication systems have higher data rates and data transfer density, millisecond latency and enhanced spectral energy. The International Telecommunication Union (ITU) has specified a number of the mm-wave frequency bands for 5G [5] wireless networks, but the 27.5–28.35 GHz band was proposed for wide usage in many countries and was licensed by the Federal Communications Commission (FCC) [6].
Power consumption is one of the most significant technical barriers for practical mm-wave 5G wireless communications because multiple devices connected at the same time increase the power consumption of the base stations and data centers. Photonic technologies can be utilized in order to solve this problem. In data centers, chip-to-chip optical or electro-optical interconnects enable an increase in the bandwidth and capacity of those systems as well as a reduction in power consumption [7,8].
In a conventional 4G communication system, one or more passive antennas are used. Wireless 5G networks are based on active massive-element antenna systems that improve the capacity, efficiency and coverage of RF streams [9] (Figure 1).
To improve the bandwidth and data rate, the multiple-input multiple-output (MIMO) transceivers based on phased beamforming arrays are used [10,11,12,13]. Usually, active antenna systems consist of massive antenna arrays with integrated MIMO transceiver RF front-ends.
Figure 2 shows the design of a multichannel transmit RF front-end (RFFE) module for 5G MIMO transceivers. There is a symmetrical antenna array where each channel consists of a phase shifter, a driver amplifier and a power amplifier. The input splitter divides the RF signal into a number of channels. The symmetry of the RFFE module architecture allows for a balance between input and output losses and power consumption.
The performance and power consumption of millimeter-wave 5G communication systems are mainly dependent on the electrical parameters of using RF electronic components based on semiconductor monolithic integrated circuits, which are the key elements for mm-wave RF transmit/receive modules. The development of such elements is a difficult challenge.
A previous study presented the results of the development of a 28 GHz phase adjustable power amplifier monolithic microwave integrated circuit (MMIC) for 5G front-ends [14]. It consisted of a 4-bit digitally controlled phase shifter and power amplifier. The MMIC was designed by Plextek RFI and fabricated by Win Semiconductors using a 0.15 µm GaAs pHEMT process. The main disadvantage of this MMIC is a low phase shift resolution of 22.5°, which results in reduced beamforming opportunities and low antenna gain.
In this study, the design approach for a 28 GHz single-chip transmit RFFE MMIC with high phase shift resolution (5.625°) for multichannel 5G wireless communications is presented, along with its electrical performance. The integrated circuit (IC) consists of a 6-bit digital phase shifter, a driver amplifier and a power amplifier and was designed using a 0.25 µm GaAs pHEMT process of JSC Micran (Tomsk, Russian Federation) for low-cost volume production.

Figure 3 shows a photo of a fabricated one-channel single-chip transmit RF front-end MMIC. The chip dimensions are 4.35 mm × 4.40 mm. The single-chip IC consists of a 6-bit phase shifter with a transistor-transistor logic (TTL) driver, a driver amplifier and a power amplifier (PA) and was designed using a 0.25 µm GaAs pHEMT process for low-cost volume production.
The phase shift level of a single-chip transmit RFFE MMIC is controlled by an integrated TTL driver. The 6-bit digital driver can precisely adjust a phase from 0 to 360° with a step of 5.625°. Table A1 in Appendix A shows the phase shifter state table. There are two control levels (0 and 1) for all bits. Low (0) and high (1) TTL control levels are 0 and +5 V. Applying different control levels for all 6 bits of the digital phase shifter may change the phase shift across the full 360° range.
The high- and low-pass (HP-LP) RF filters were used to design the 6-bit digital phase shifter [15]. The applied TTL control voltages across all bits allowed the switching of states between HP-LP filters to form the required output phase shift level. This solution exhibits good return losses, phase shift performance in RMS phase and gain errors.
The electrical schemes and layout plots of 180, 90, 45, 22.5, 11.25 and 5.625° bits are presented in Figure 4, Figure 5, Figure 6, Figure 7, Figure 8 and Figure 9. For 180 and 90° bits, a circuit was selected with switchable filters using an inactive arm in the filter. The classical solution of using switchable filters does not provide a sufficient level of decoupling of the active and inactive arms, which leads to an increase in the initial bit losses. The 45 and 22.5° bits were designed according to the scheme with switched elements in the filter. This is the only possible solution for the 27.5–28.35 GHz band. For 11.5 and 5.625° bits, a circuit was designed with a serial connection of filters due to a very small inductance. In this circuit, the inductance is shunted because the required phase shift requires a large length of the microstrip.
The choice in the order of the phase shifter bits was carried out strictly on the principle of minimal influence of the reflection coefficient between the bits. To do this, the sections with the lowest similarity of the reflection coefficient are placed between the sections with the highest similarity of the reflection coefficient. The most stable bits are 180 and 90°, and the least stable bits are 11.25 and 5.625°. Therefore, the optimal bit ordering is selected as follows: 22.5 to 11.25 to 90 to 5.625 to 180 to 45°. This ordering allows the RMS phase shift error to be reduced.
The power amplifier (PA) of a single-chip transmit front-end MMIC consists of three power stages and matching networks (Figure 10a). The base active element of the PA is a GaAs pHEMT with a 0.25 µm length gate. To achieve a balance between output power capability and cutoff frequency, the transistor gate width is 100 µm (Figure 11). The increase in gate width can improve the output power of the transistor, but higher parasitic capacitance will reduce the cutoff frequency. The peripheries of the transistors are 1600 µm (16 × 100 µm) for the first stage (Q1), 3200 µm (32 × 100 µm) for the second stage (Q2) and 3200 µm (32 × 100 µm) for the third stage (Q3). The supply voltage for all power stages is Vd = 6 V.
The matching networks of the power amplifier consist of thin-film NiCr-based resistors, metal-insulator-metal (MIM) capacitors based on silicon nitride, Au-based transmission lines and Lange quadrature couplers (LQCs). The proposed LQCs (Figure 10b) are used in input and output matching networks to improve the bandwidth and achieve a compact PA size. The symmetrical design of the PA layout and electromagnetic simulation were completed at the AWR Microwave Office [16].

Millimeter-wave wireless networks have attracted the most interest as 5G communication systems of the new generation (5G). The 27.5 to 28.35 GHz band was licensed for 5G wireless networks by the FCC. The performance and power consumption of millimeter-wave 5G communication systems mainly depend on the electrical parameters of the electronic RF components used inside RF transmit/receive modules.
The design approach for a 28 GHz single-chip transmit RF front-end MMIC is presented in this paper, along with its electrical performance. The IC includes a 6-bit digital phase shifter, a driver amplifier and a power amplifier. It was designed using a 0.25 µm GaAs pHEMT process for low-cost volume production. The output power P3dB and PAE are 29 dBm and 19.2% at 28 GHz. The phase shifter RMS phase and gain errors are 3° and 0.6 dB at 28 GHz. The fabricated single-chip RF front-end MMIC can be used in multichannel transmit 5G front-end modules based on phased antenna arrays.

The work was carried out with financial support from the Ministry of Science and Higher Education of the Russian Federation (Project name: Theoretical and experimental studies of ultra-wideband optoelectronic devices of fiber-optic information systems and radiophotonics based on photonic integrated circuits own development, Agreement No. 075-03-2020-237/1 from 05.03.2020, project number: FEWM-2020-0040) and Project No. AAAA-A19-119110690036-9. Experimental results were obtained by the team of the Integrated Optics and Radiophotonics Laboratory of the Tomsk State University of Control Systems and Radioelectronics using equipment of the “Impulse” center of collective usage (registration number 200568). 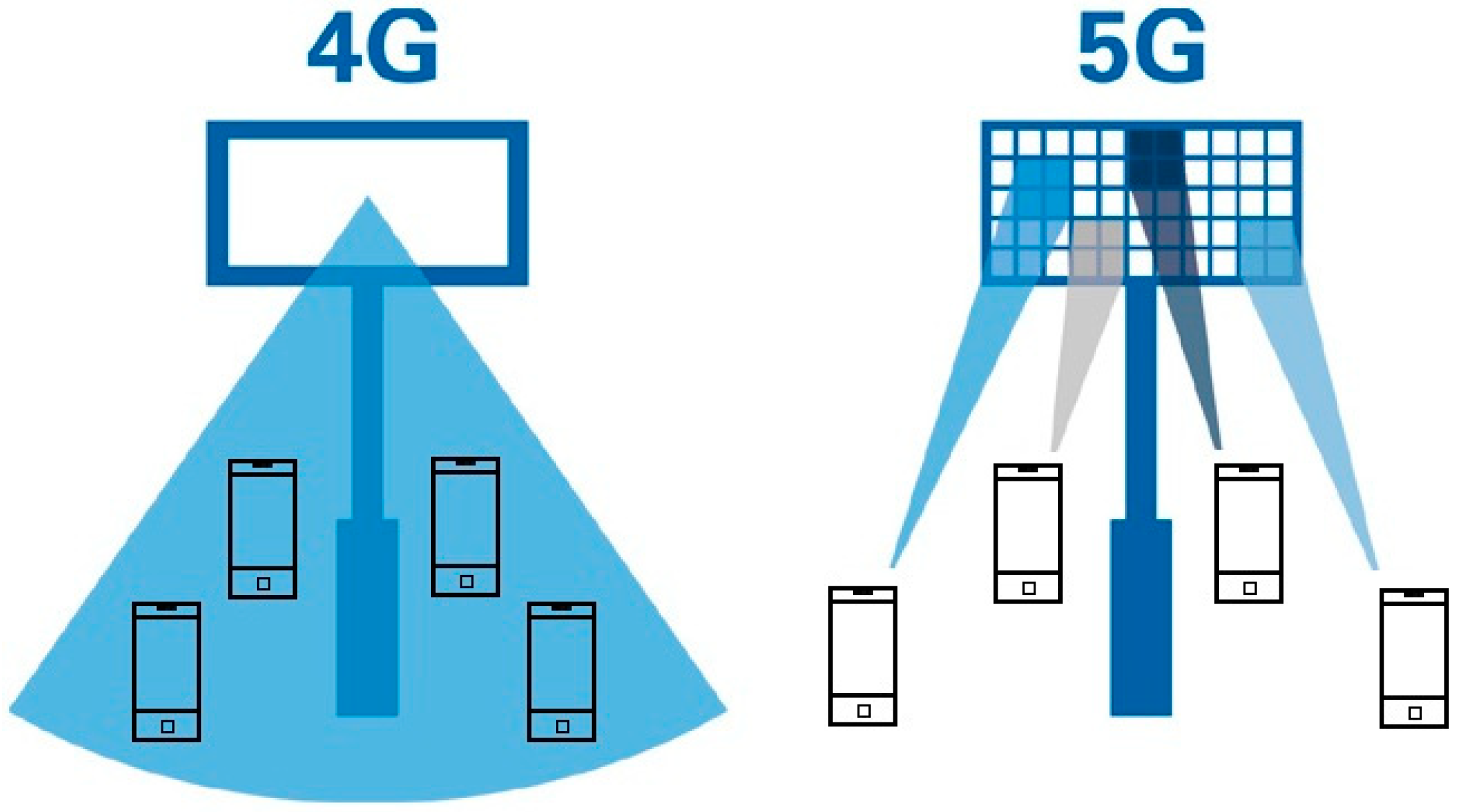 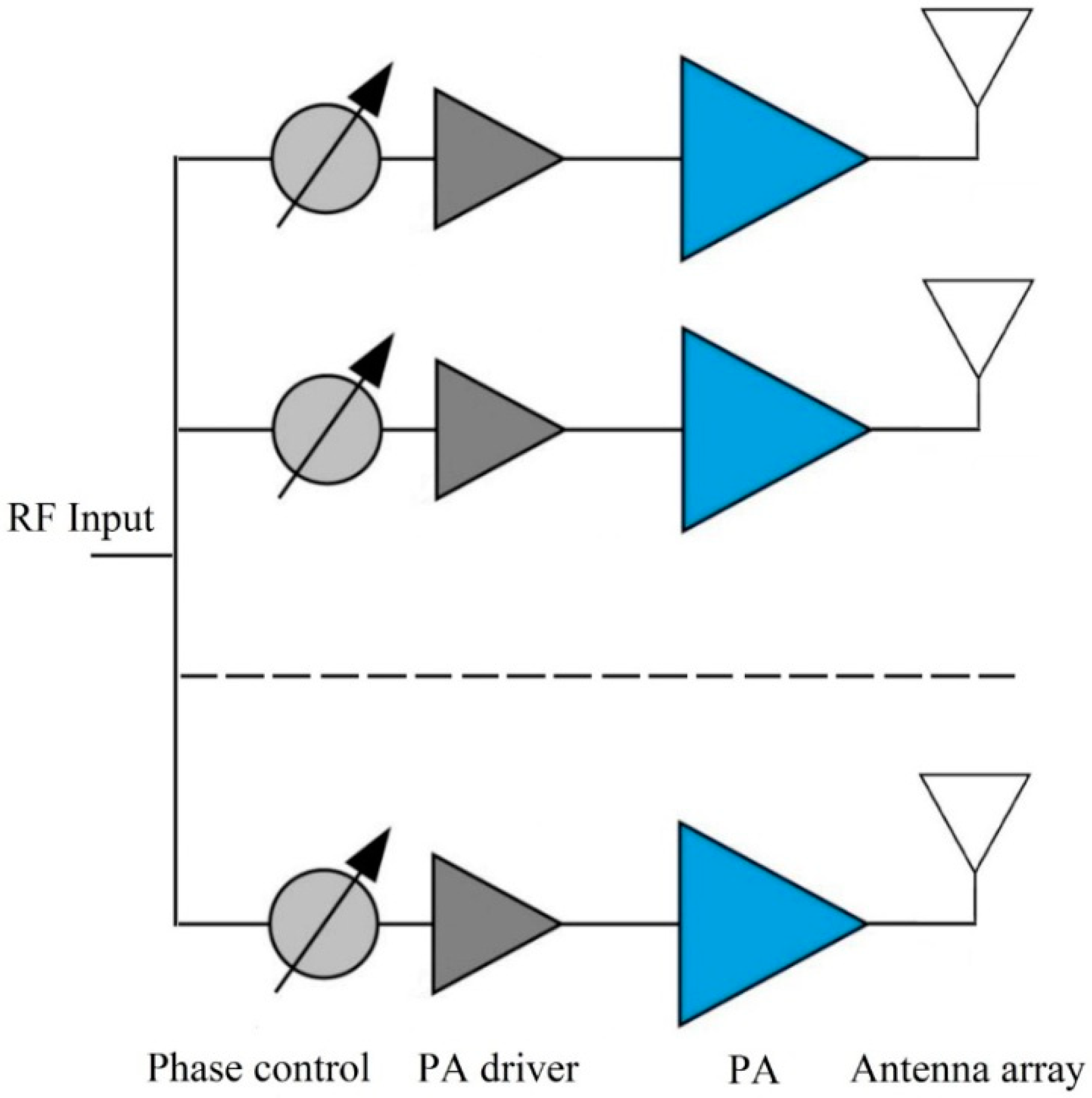 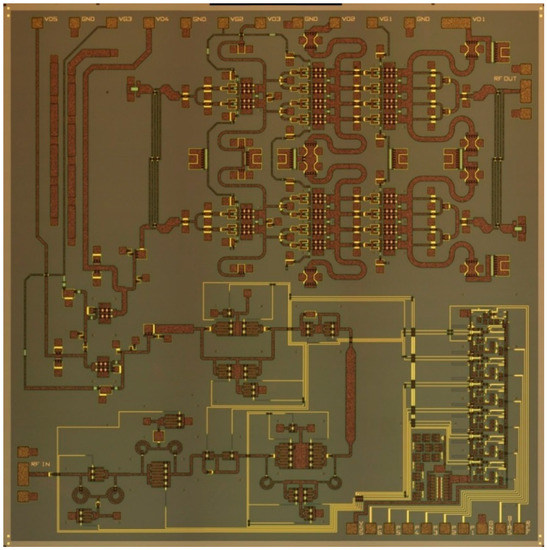 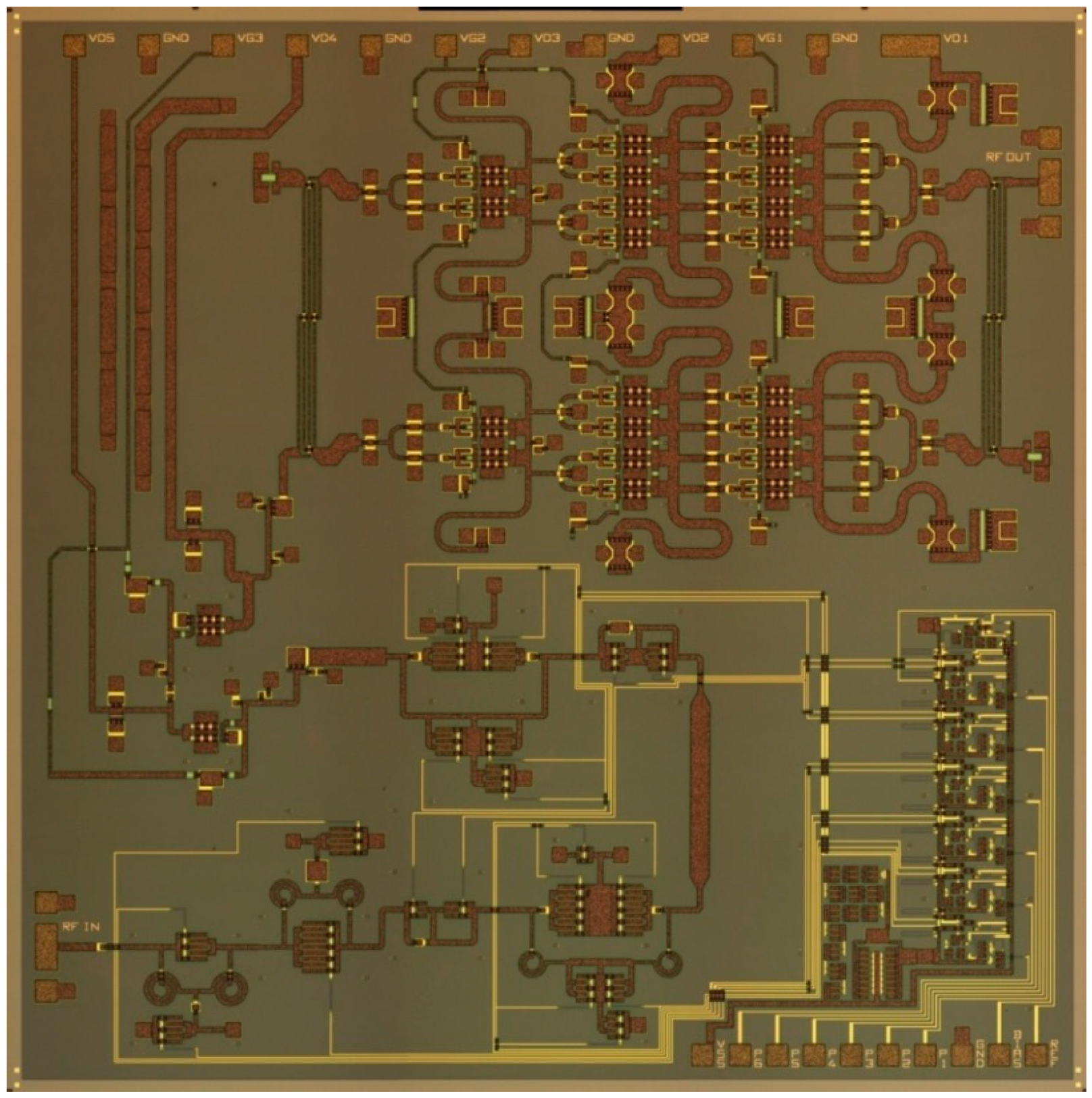 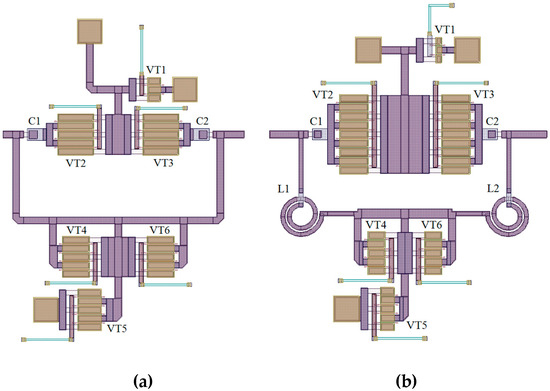 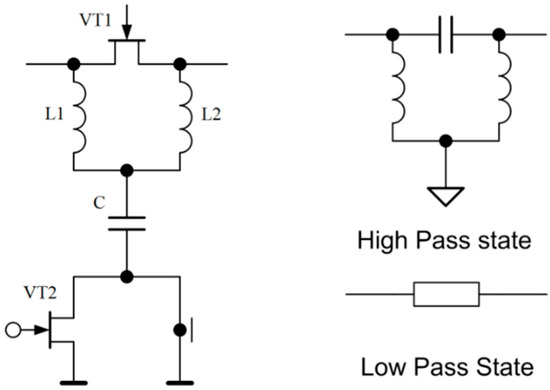 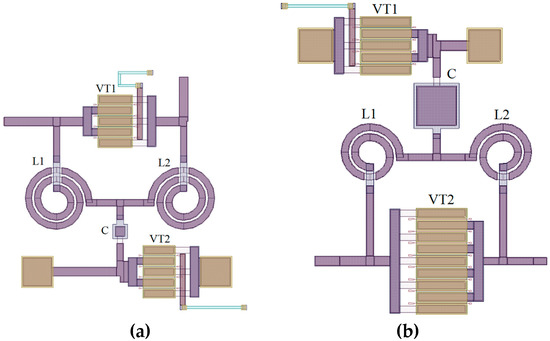 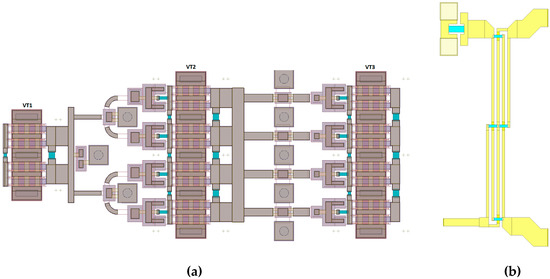 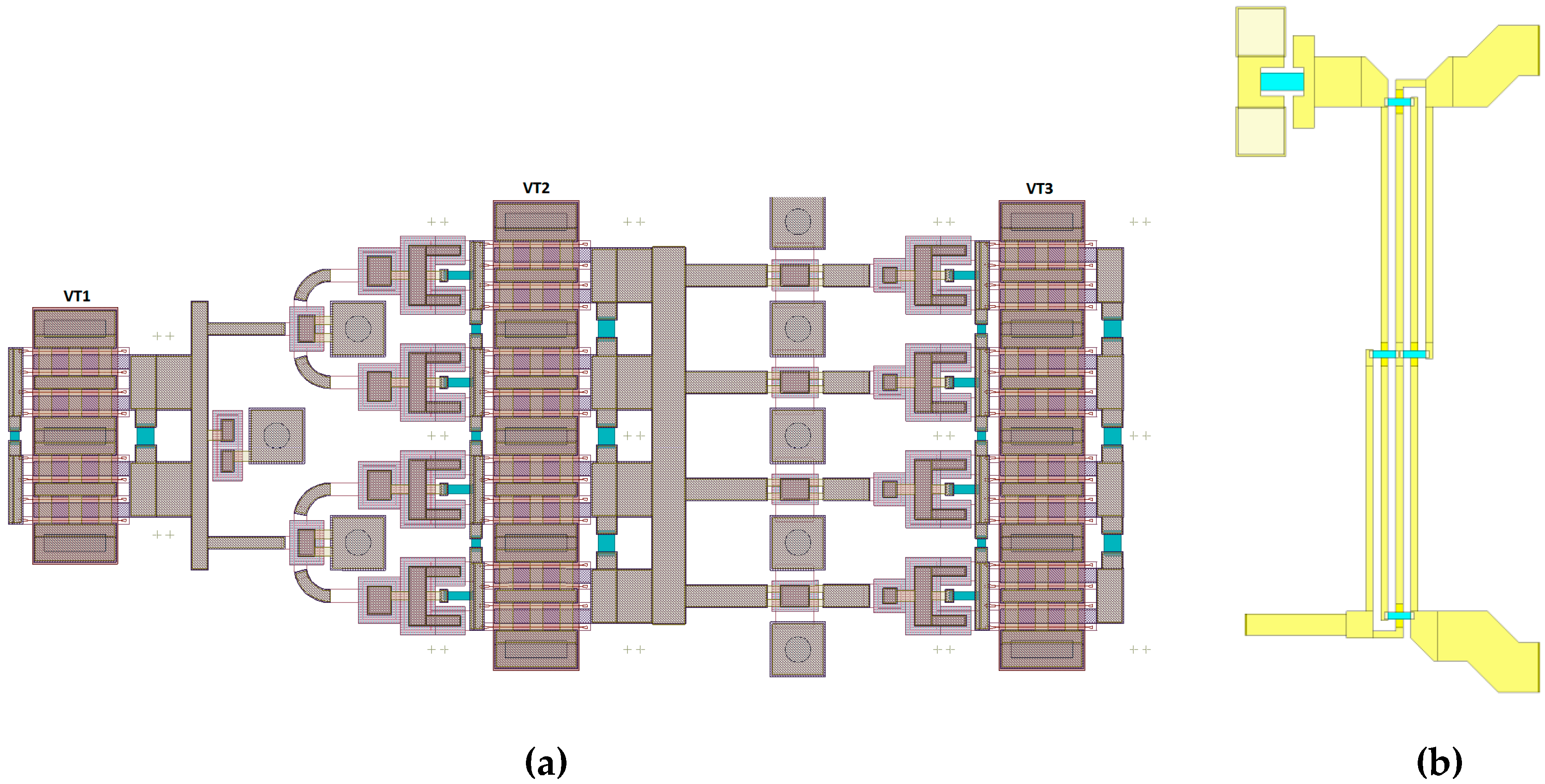 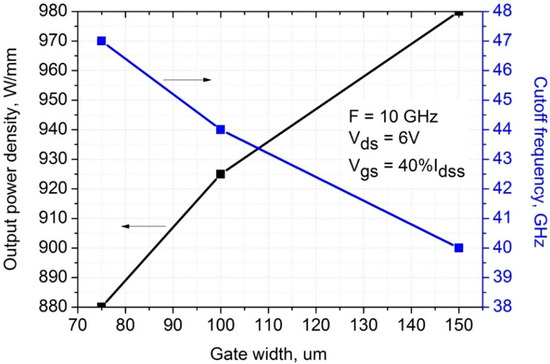 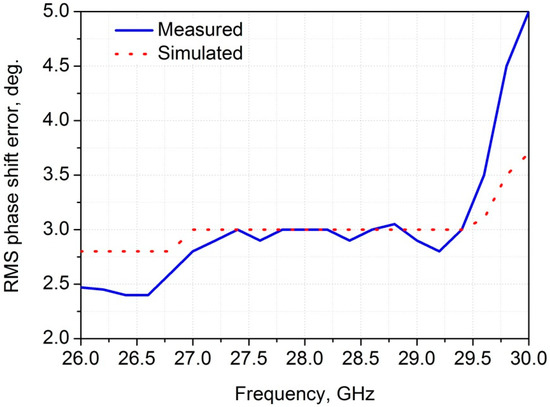 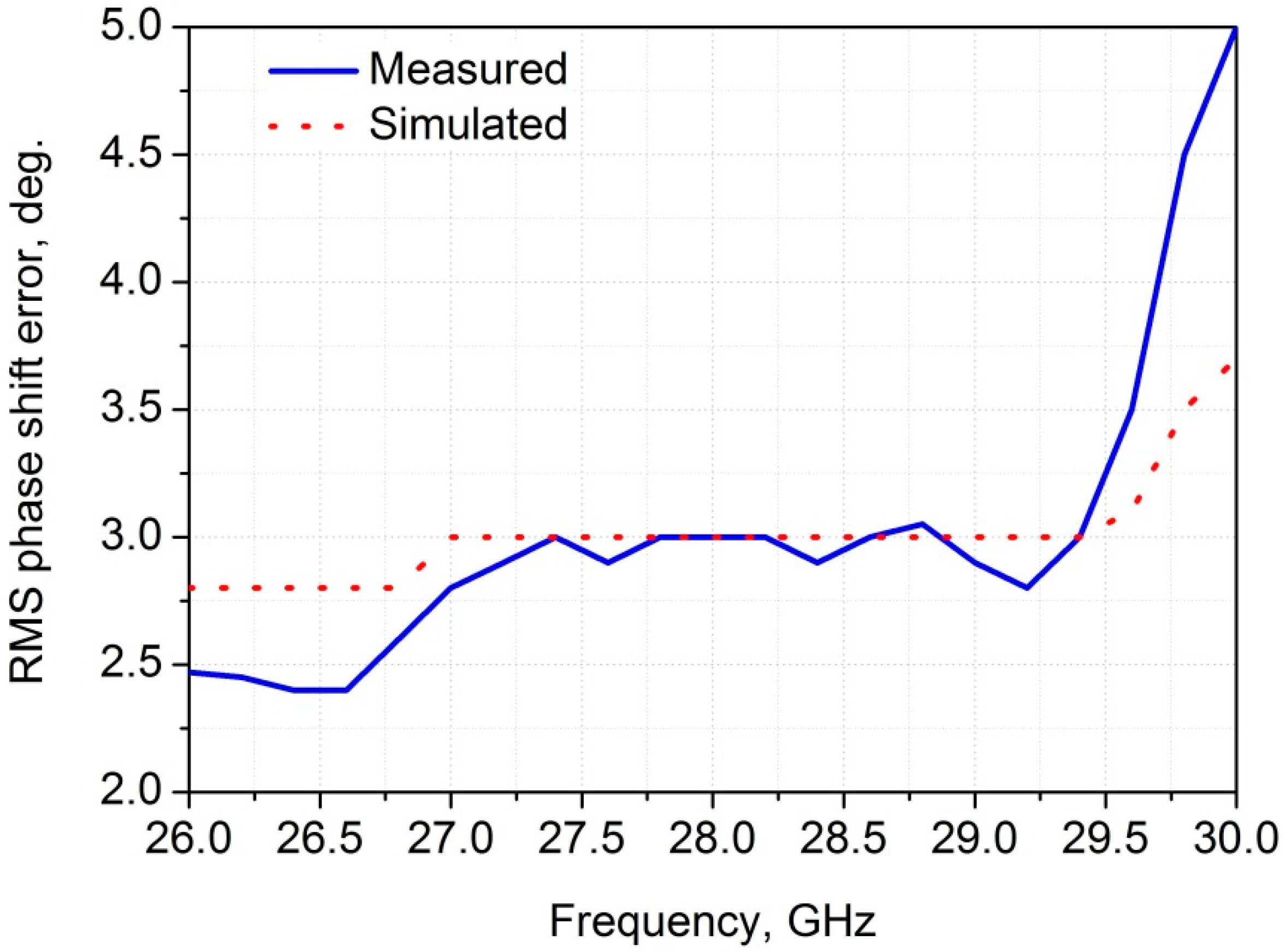 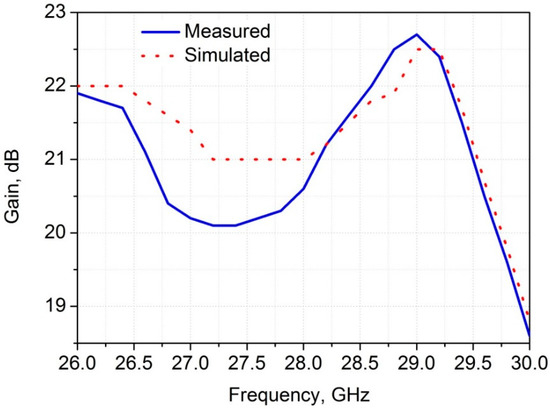 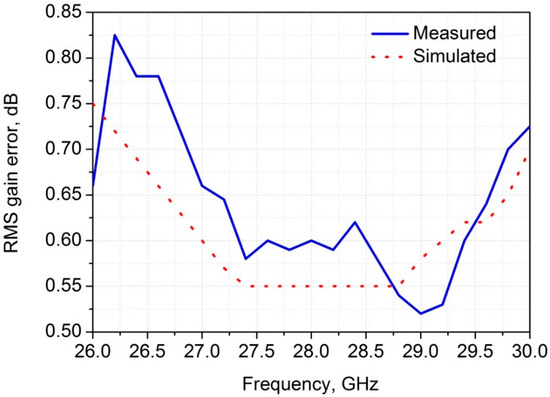 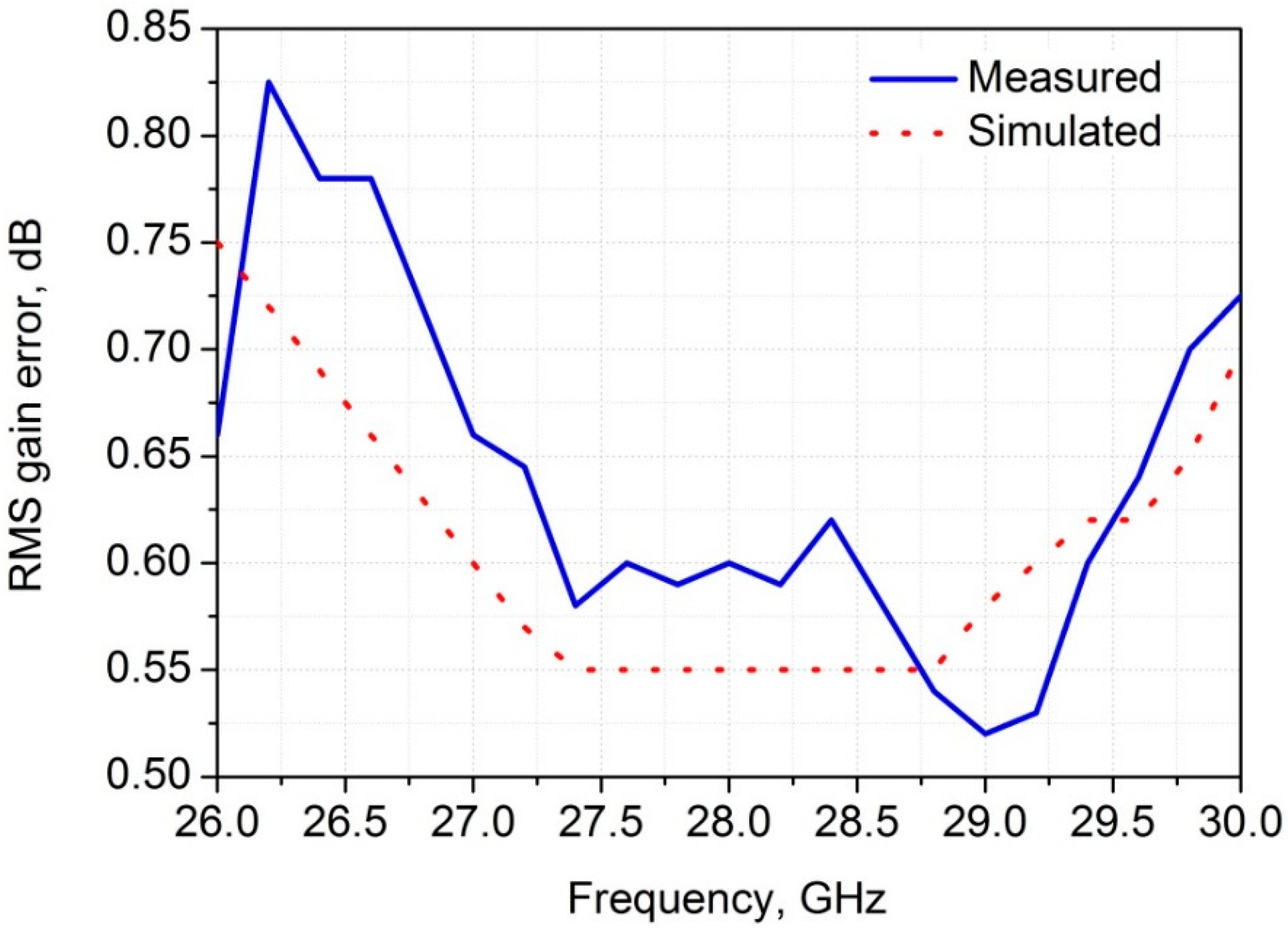 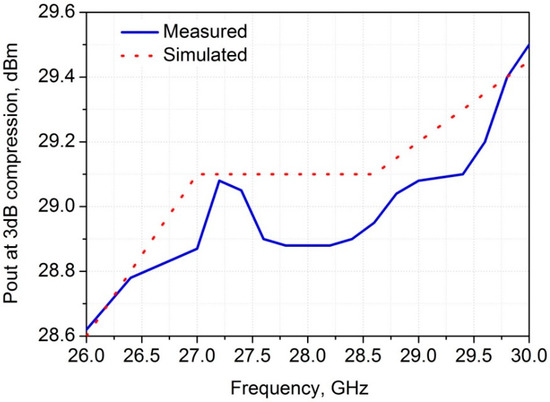 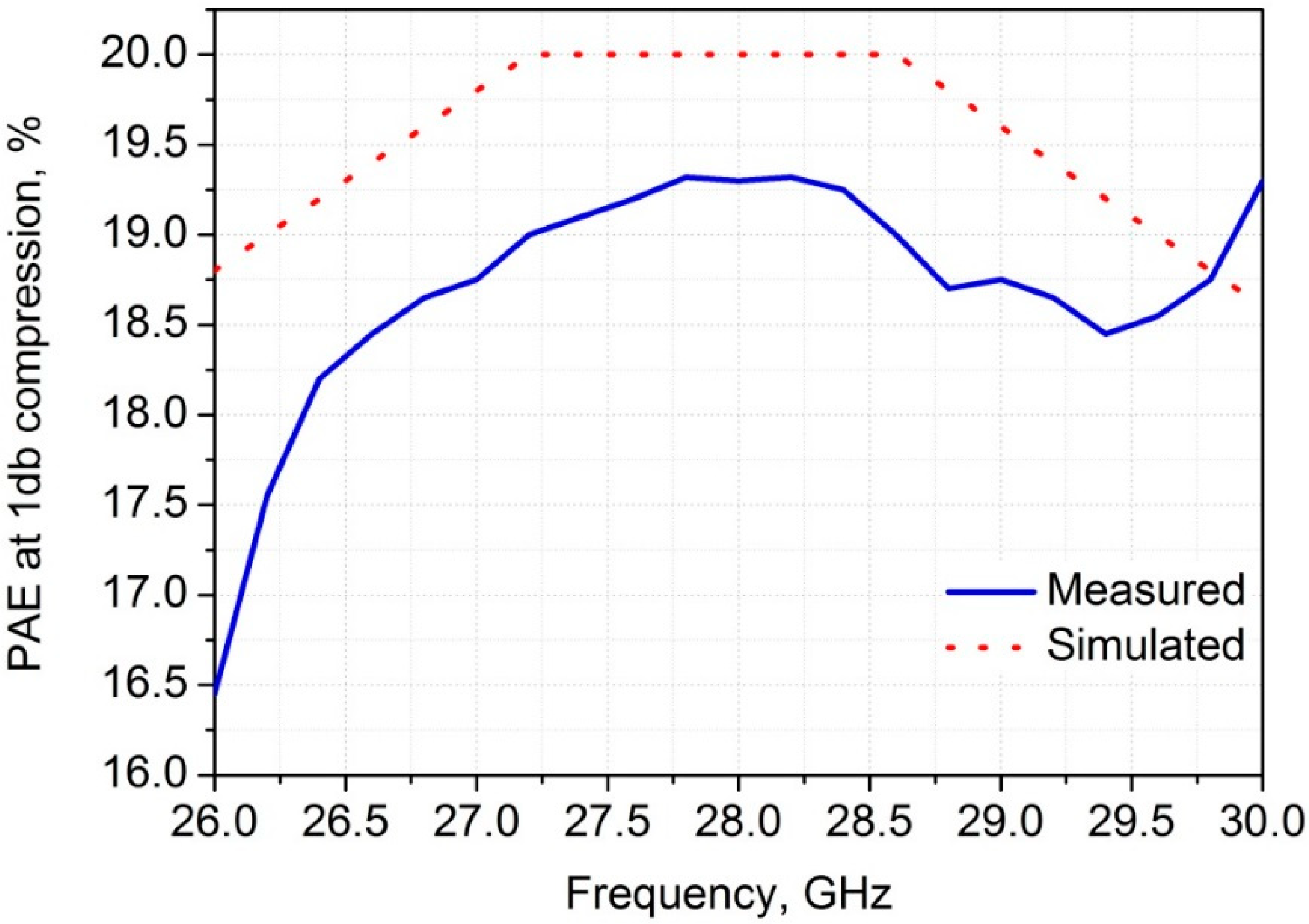 Table 1. State-of-the-art single-chip transmit RFFE MMICs.
Table 1. State-of-the-art single-chip transmit RFFE MMICs.
© 2020 by the authors. Licensee MDPI, Basel, Switzerland. This article is an open access article distributed under the terms and conditions of the Creative Commons Attribution (CC BY) license (http://creativecommons.org/licenses/by/4.0/).
We use cookies on our website to ensure you get the best experience. Read more about our cookies here.
Accept
We have just recently launched a new version of our website. Help us to further improve by taking part in this short 5 minute survey here. here.
Never show this again