Introduction to Special Issue on Symmetry in Mechanical Engineering

The numerical model was developed using the MSMD (multi-scale multi-dimensional) model of Ansys Fluent [25]. The LIR2450 coin cell was modeled with radius of 24.5 mm and height of 5 mm. The mesh was generated with 107,478 nodes and 99,552 elements. The geometry and meshing images are provided in Figure 2. The current density, , was calculated from Equation (4), proposed by Newman, Tiedemann, Gu, and Kim (NTGK) [26] as follows: where V is battery cell voltage; Qnominal is the battery capacity in Ampere hours; Qref is the battery capacity used in the experiments to obtain Y and U. Y and U are LIB depth of discharge functions. In the present study, discharge tests were conducted at different constant currents to obtain Y and U functions. The obtained Y and U are fitting parameters with functions of depth of discharge in Equations (5) and (6), as initially suggested by Gu et al. [27]. The values obtained by curve fitting for the 120 mAh LIR2450 coin cell battery are presented in Table 3.
The thermal- and electrical-coupled field equation for battery operation were solved using Equations (7)–(9) [25], where σ+ and σ− are electrical conductivities of the positive and negative electrode, respectively; ϕ+ and ϕ− phase potentials for the positive and negative electrodes, respectively; and represent volumetric current transfer rate and heat due to electrochemical reaction, respectively; and represent current transfer rate and heat generation during internal short circuit, respectively. ρ, k, and T represent density, thermal conductivity, and temperature, respectively.
In Equation (10), Qnominal and Qref are the same as the reference battery parameters and are estimated through experimentation. The electrochemical reaction heat was calculated as given in Equation (11). The first term (U − V) in Equation (11) [25] represents heat generated due to overpotential, and the second term is related to heat generated due to entropic heating.
During the normal operation of LIB battery, the cathode and anode are separated by separators, which is generally thin polymer material. The separator prevents the direct contact of positive and negative electrodes. In the event of short circuiting, as a result of penetration or crash, the separator gets damaged, which results in a secondary current along with regular current flowing through tabs. The transfer short current density is computed from Equation (12). The heat generated by internal short circuit is computed by volumetric contact resistance (rc/a), where rc is contact resistance and a is the specific area of the electrode, as shown in Equation (13) [23].

The results present the effect of various parameters on the thermal behavior of the coin cell with internal short circuit caused by penetrating element. The numerical model is used to simulate the thermal behavior of the penetrating element before the coin cell reaches 150 °C [17]. Thermal runaway behavior, including material decomposition, is not included in the present study. The focus of the present study is to analyze the thermal abuse behavior due to internal short circuit before the coin cell temperature reaches thermal runaway [17]. The experimental study was conducted at a 1C discharge rate, with a fully-charged coin cell, at a controlled ambient temperature of 25 °C. A battery specific model was developed with U and Y as functions of depth of discharge, using experimental voltage, current, and temperature data with the parameter estimation tool. For all numerical simulations in the present study, the developed model parameters were treated as reference model parameters.

4.4. Effect of Initial State of Charge

The state of charge is an indicator of usable energy available compared to maximum rated usable energy. Figure 6a shows the effect of initial state of charge (SOC) on the maximum temperature of the coin cell. The maximum temperature of the coin cell increased with the increase in the initial SOC of the coin cell. Although temperature increased continuously for all SOC levels, the cases with high initial SOC levels showed high temperatures owing to stable high currents for sufficiently long periods [6]. Moreover, the rate of increase of temperature is slightly higher for low SOC level, because the available energy depleted quickly in the case of low SOC levels. The maximum and minimum temperatures of 113.5 and 67.7 °C are observed for 100% and 40% SOC levels, respectively. Similarly, the continuous heat generation rate is maintained for long periods with higher SOCs leading to higher temperatures, as shown in Figure 6b. The characteristic rapid rise of the heat generation rate at the start is observed for all cases of SOCs. The maximum and minimum total heat generation rates of 472,707.2 and 340,656.4 W/m3 are observed for 100% and 40% SOC levels, respectively. The results of various SOCs show that the thermal runaway temperature attainment is strongly dependent on the SOC level. The results support the findings of Cai et al., which showed that chances of partially-charged LIBs (at 50% SOC or lower) to attain thermal runaway temperatures are rare during mechanical abuse [32]. The maximum temperature decreases as the SOC decreases. On the other hand, more energy is produced for higher SOC levels, as visible for the area below the heat generation curve shown in Figure 6a [31]. The thermal stability of LIB components is strongly dependent on SOC levels [33]. LIBs operate based on the intercalation–deintercalation phenomenon, in which lithium-ion occupies porous structures of cathodes or anodes during charging–discharging. As the level of lithiation in negative electrodes increases, more lithium-ions are available for reactions that are exothermic in nature [34]. The exothermic reactions involving cathodes and electrolytes increase heat generation linearly with the increase in the SOC level, which indicates that SOC levels can play an important role in the event of thermal runaway. This is experimentally shown by Mao et al., where batteries with 100% SOC were burnt owing to thermal runaway, and low SOC level batteries with 0% and 50% were not burnt [22].
Besides this, other parameters, including battery type, battery design, components of active battery material, battery shape, and size of battery, are key important factors that can affect the thermal behavior of LIBs. Therefore, the SOC level effect with penetrating element on the thermal behavior of LIBs is very specific, and may have different results (with above suggested parameters) for different batteries. In addition, the temperature non-uniformity is dependent on the size of the battery under consideration. In the present study, due to the compact size of the coin cell, the temperature non-uniformity study is not considerably relevant. The initial rise of the heat generation rate is maximum for 100% SOC and decreases as the SOC level decreases. Zao et al. discussed practical ways to prevent thermal runaway, and ruled out the decrease of SOC as a practical option to prevent thermal runaway in the case of nail penetration [31]. However, this strategy can be used for aircraft “cargo-only” transportation of batteries, where SOC should be kept at less than 30% to prevent thermal runaway [35]. Figure 6c shows the voltage response of the coin cell for different SOC levels. For different SOC levels, the initial voltage is different [9]. For low SOC, the capacity depletes soon after the stable current is established, with the attainment of a discharge cut-off voltage of 2.75 V. This results in a relatively less heat generation rate, leading to a comparatively low temperature. The voltage curve trends are the same for all the cases of SOC, as all other parameters are kept constant except SOC. The present model did not consider the discussions on thermal runaway behavior for temperatures exceeding 128 °C, as thermal runaway behavior including material decomposition is not included in the present study [6,36]. The results of maximum temperature, heat generation rate, and voltage profile of the coin cell for different SOC levels show that the initial SOC level has a substantial effect on the thermal behavior of the coin cell.

4.5. Effect of the Location of the Penetrating Element

4.6. Effect of the Heat Transfer Coefficient

This work was supported by LG Yonam Foundation (of Korea). 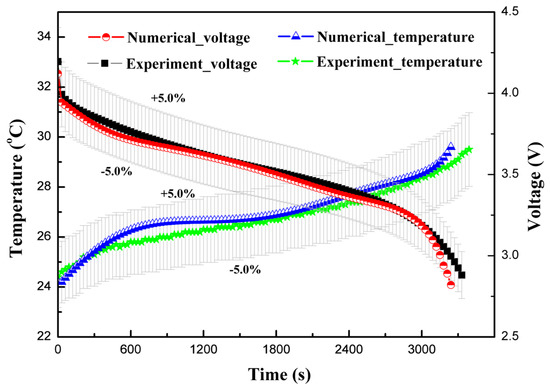 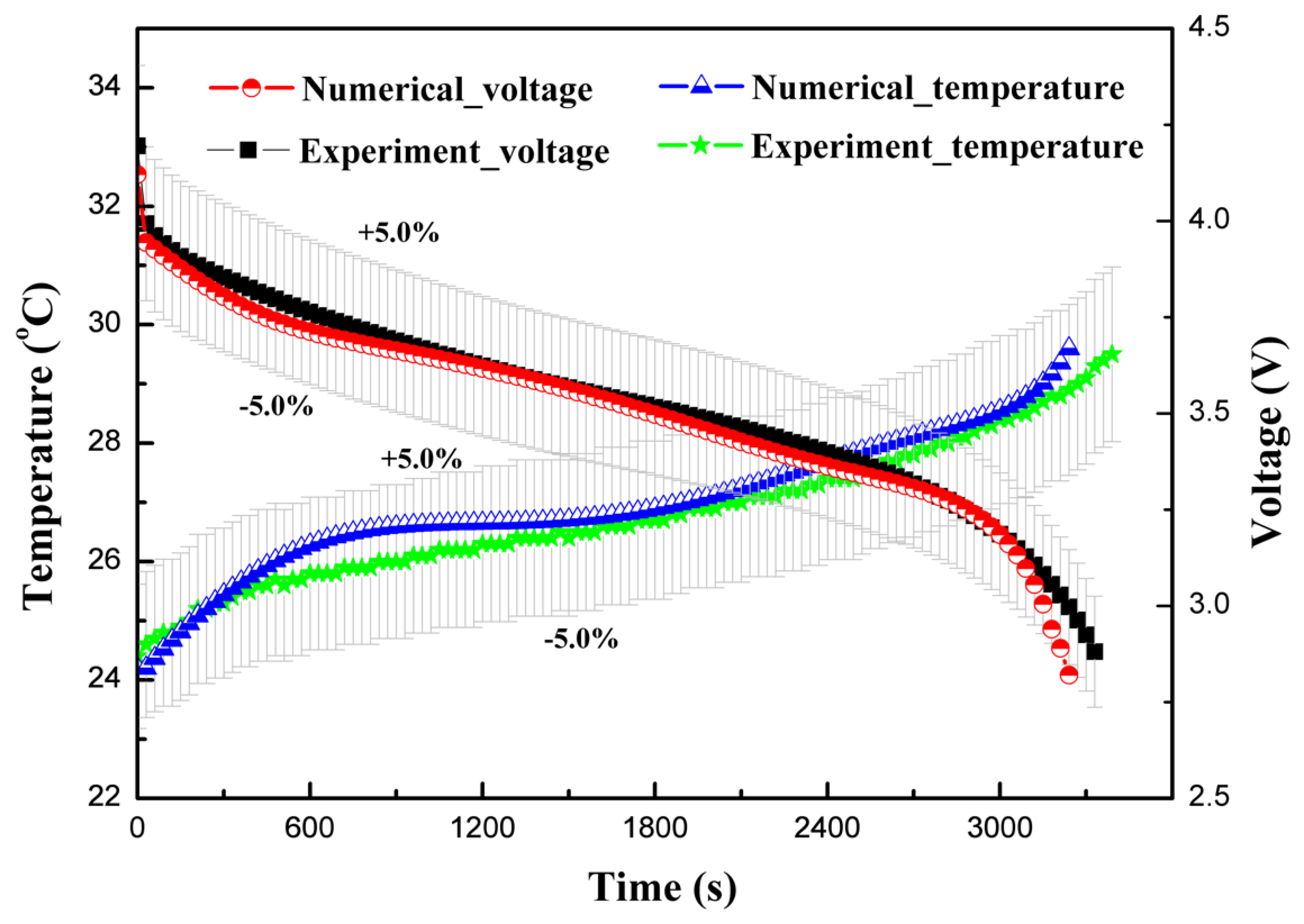 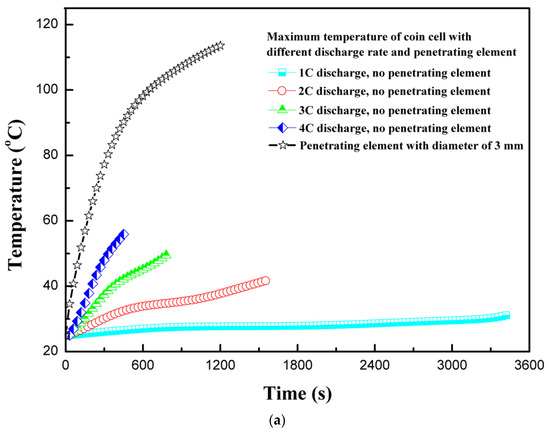 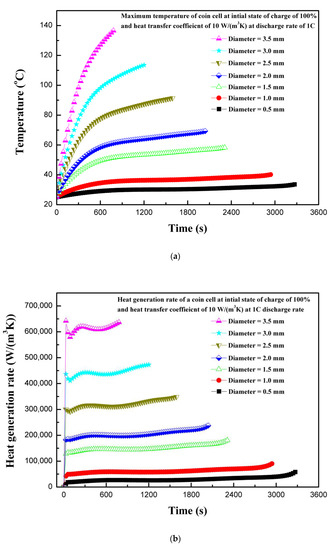 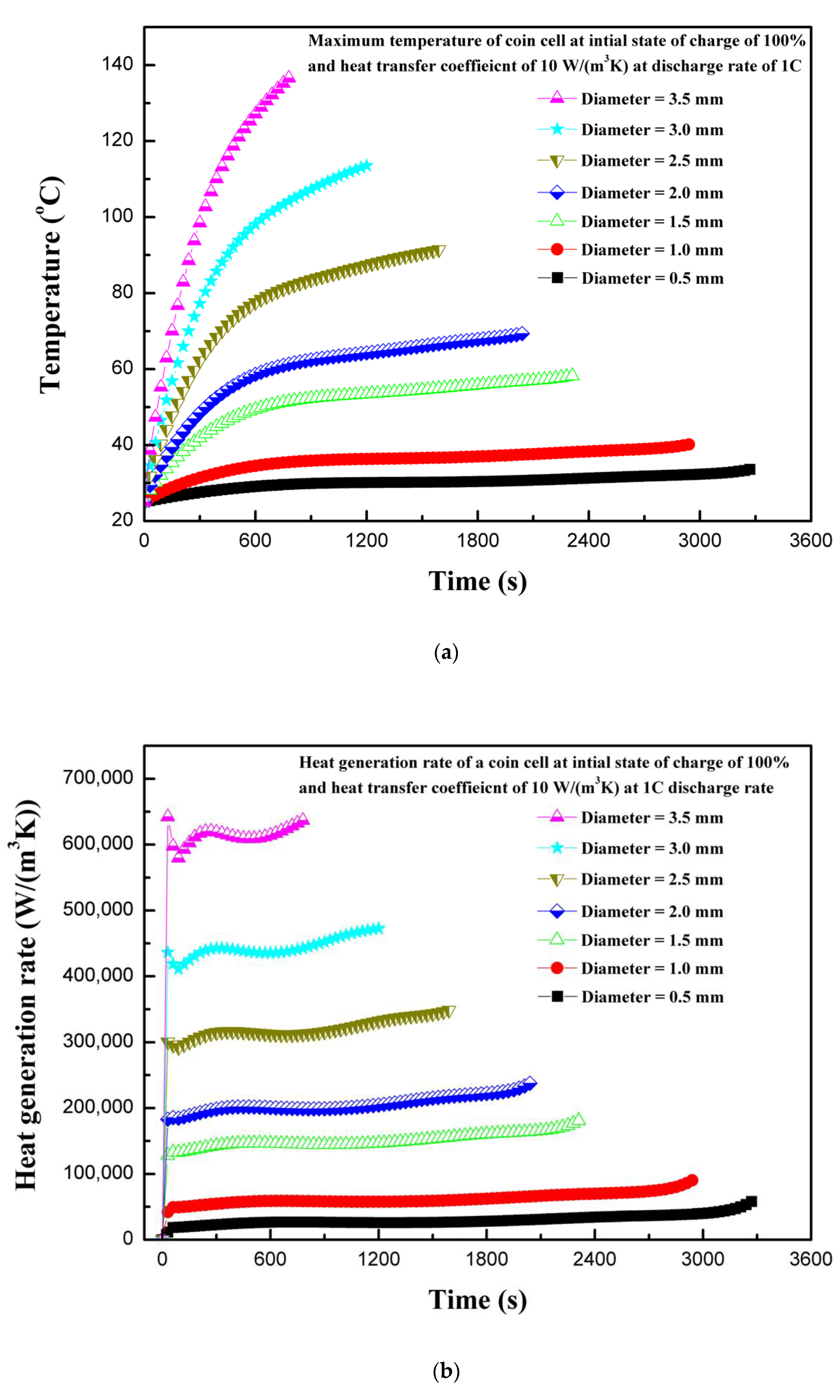 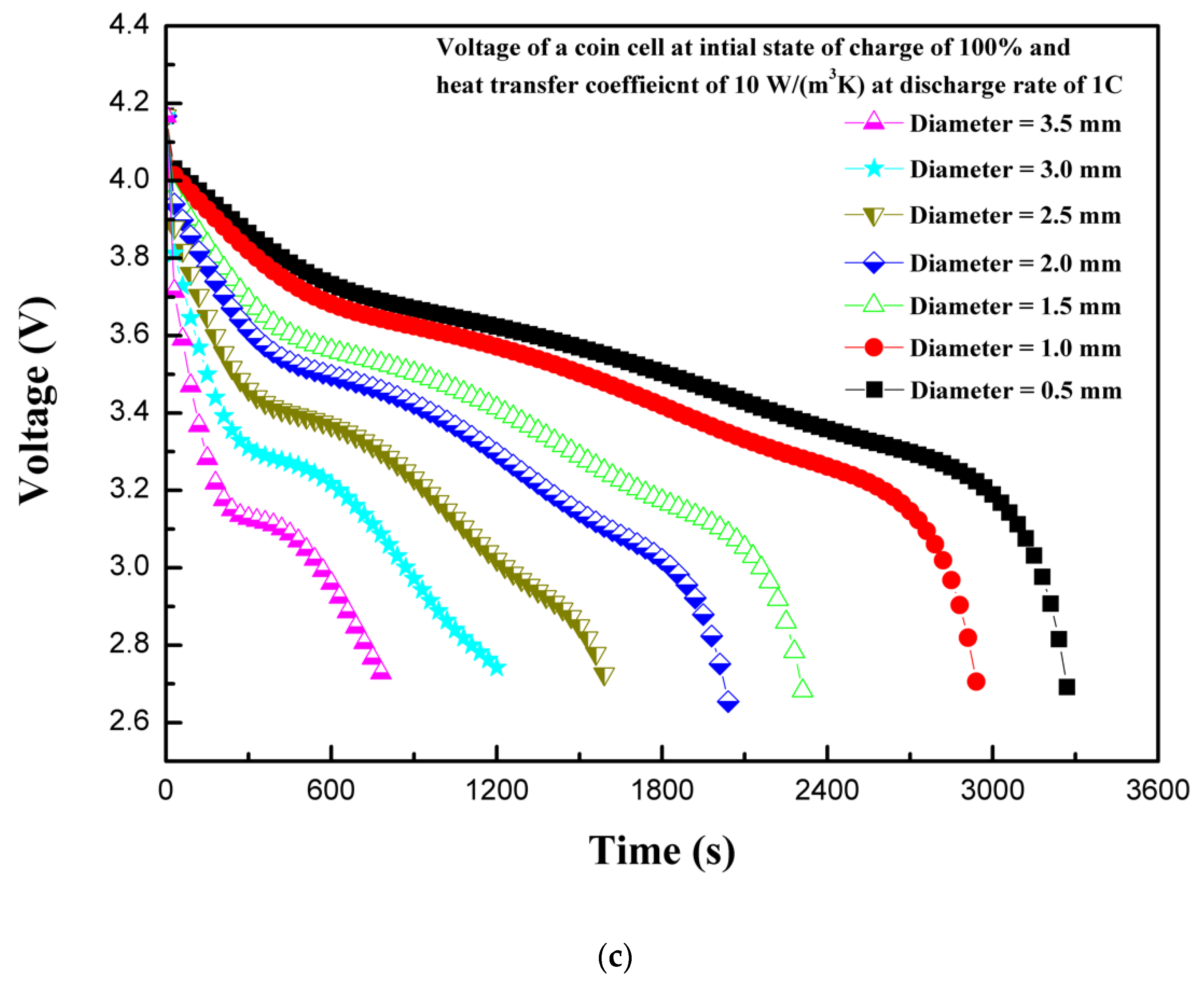 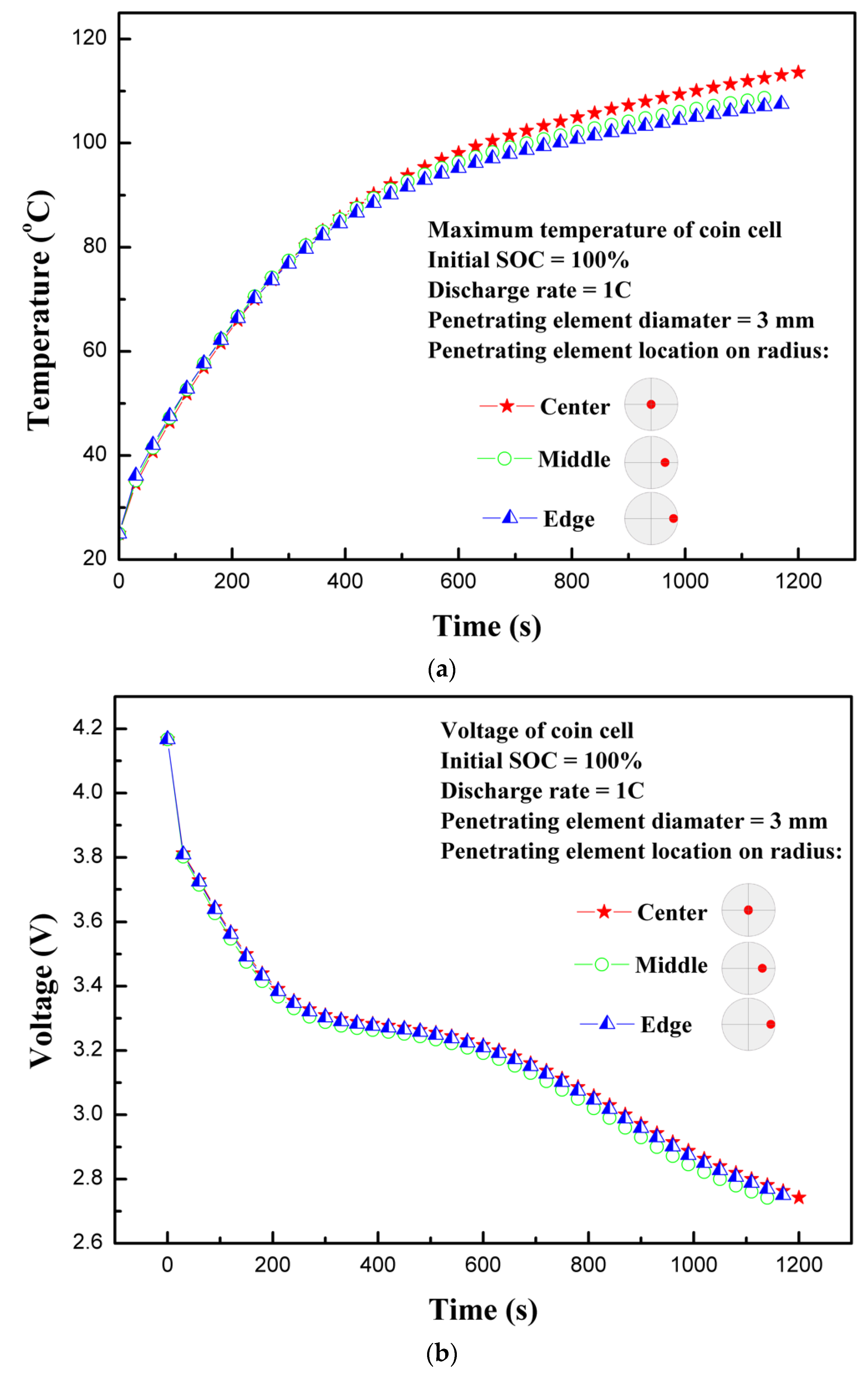 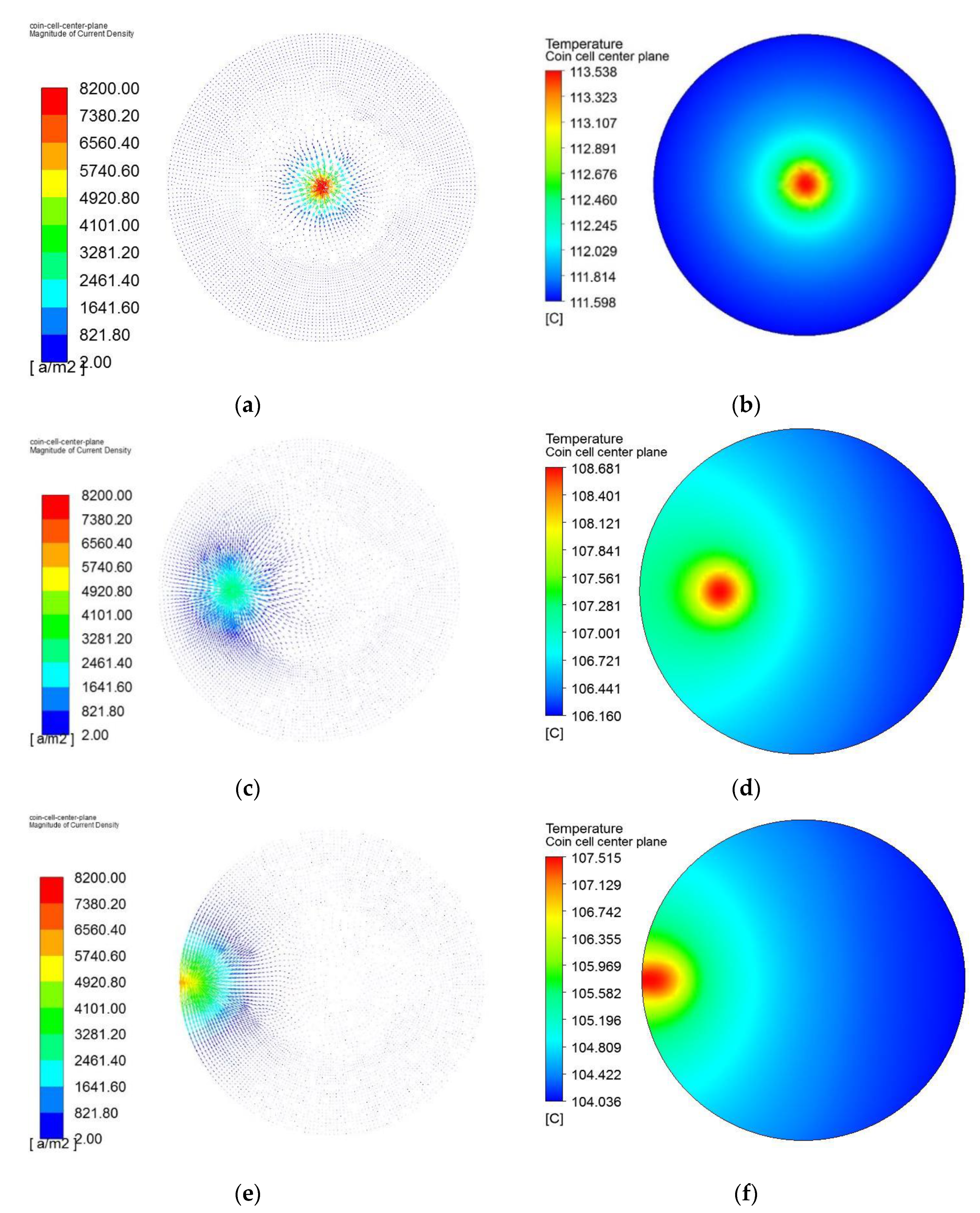 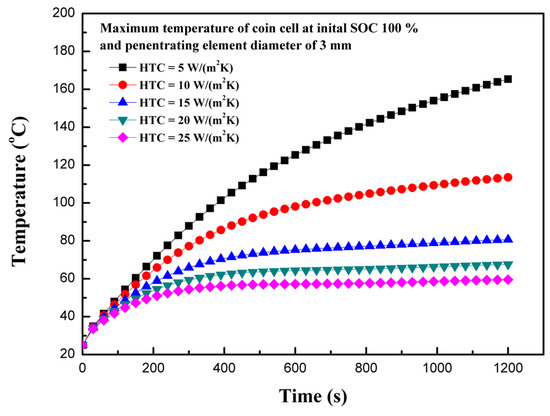 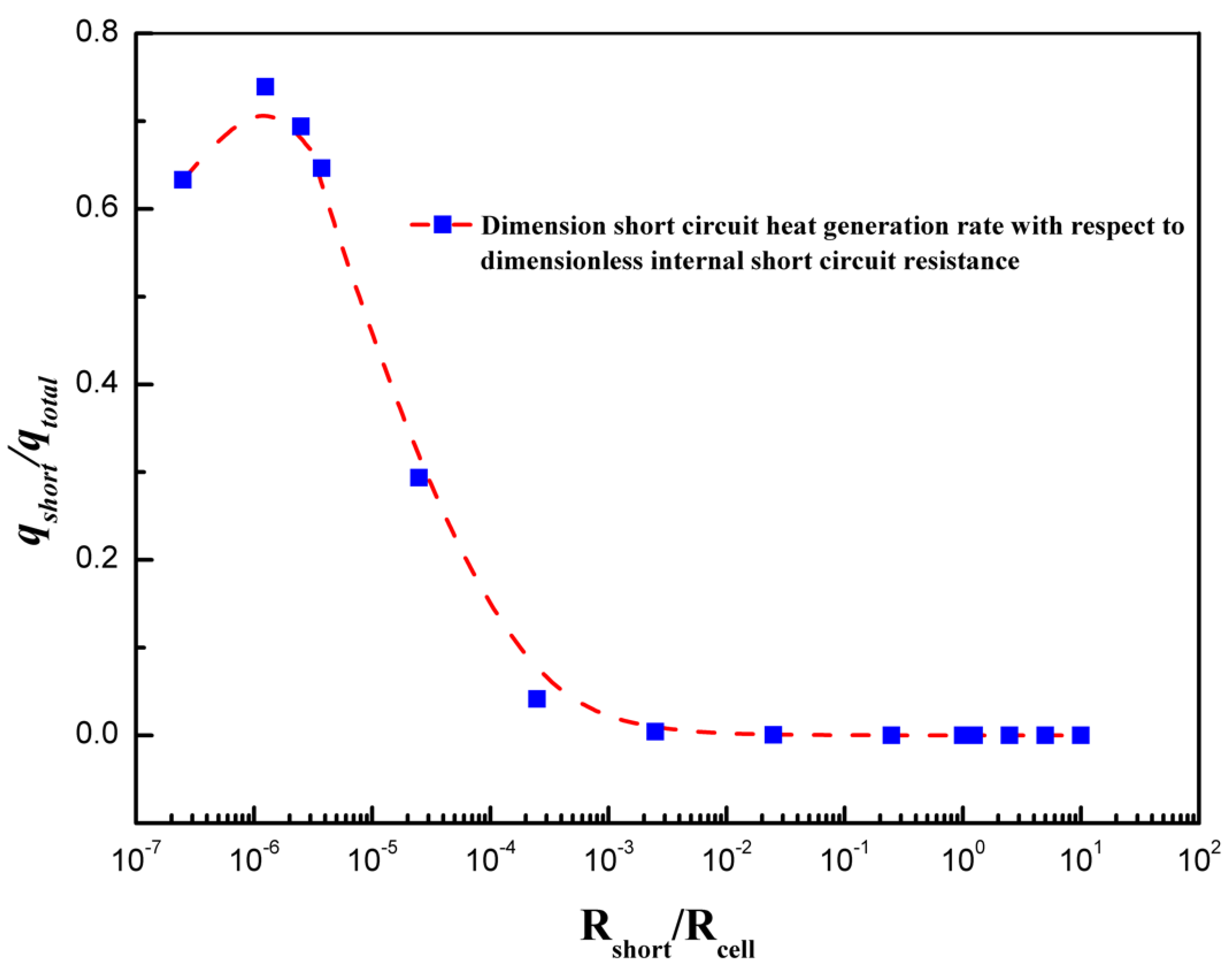 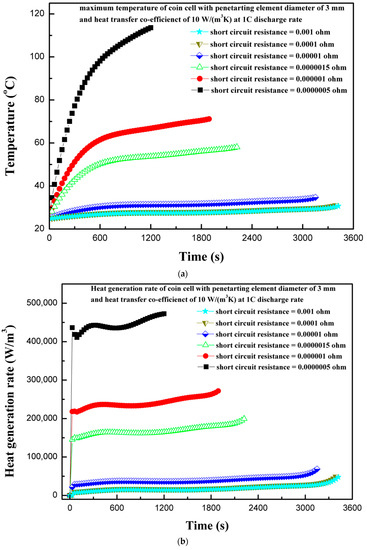 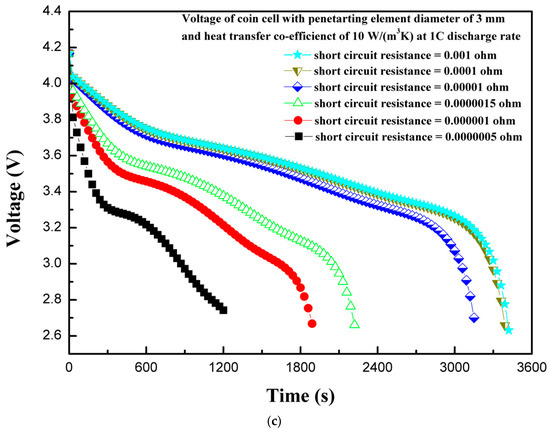 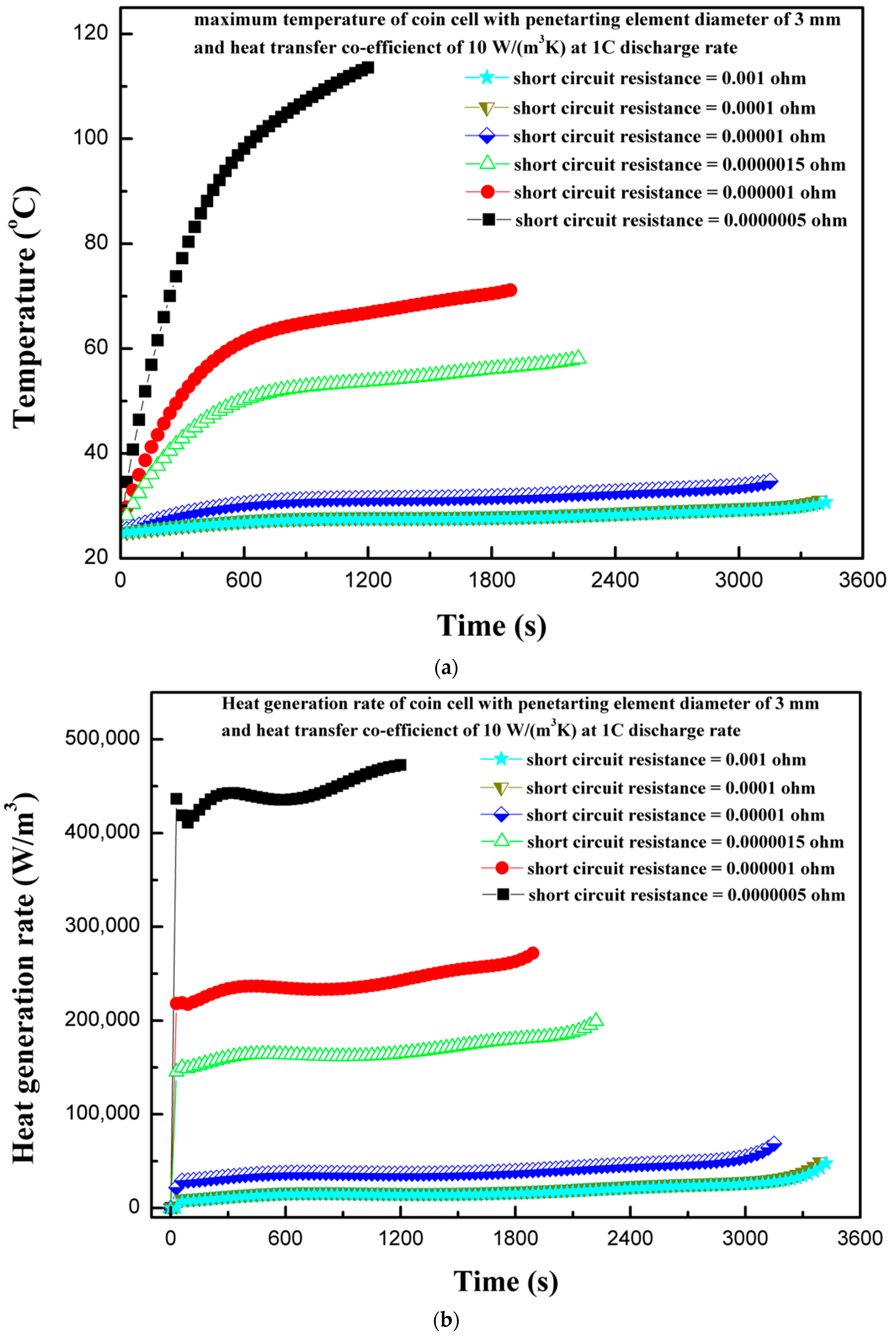