Article
Magnetohydrodynamic (MHD) Flow of Micropolar Fluid with Effects of Viscous Dissipation and Joule Heating Over an Exponential Shrinking Sheet: Triple Solutions and Stability Analysis
by

:
A numerical study was carried out to examine the magnetohydrodynamic (MHD) flow of micropolar fluid on a shrinking surface in the presence of both Joule heating and viscous dissipation effects. The governing system of non-linear ordinary differential equations (ODEs) was obtained from the system of partial differential equations (PDEs) by employing exponential transformations. The resultant equations were transformed into initial value problems (IVPs) by shooting technique and then solved by the Runge–Kutta (RK) method. The effects of different parameters on velocity, angular velocity, temperature profiles, skin friction coefficient, and Nusselt number were obtained and demonstrated graphically. We observed that multiple solutions occurred in certain assortments of the parameters for suction on a surface. The stability analysis of solutions was performed, and we noted that the first solution was stable while the remaining two solutions were not. The results also showed that the velocity of the fluid increased as the non-Newtonian parameter rose in all solutions. Furthermore, it was detected that the temperature of fluid rose at higher values of the Eckert number in all solutions.
Keywords:
triple solutions; micropolar fluid; shrinking; stability analysis

The boundary layer flow and heat transfer over a stretching/shrinking sheet have raised extensive interest worldwide, as seen throughout engineering literature, since it has many applications including glass-fiber production, plastic pieces aero-dynamic extrusion, hot rolling, paper production, etc. [1,2]. The micropolar fluid model has attracted more attention from researchers as compared to other non-Newtonian fluid models due to its ability to determine the impacts of local configuration and micro-motions of the fluid components that are disregarded by conventional models [3]. Several operative models have been carefully derived in the steady-state regime. Many researchers considered various non-Newtonian fluid models in their studies. Khan et al. [4] analyzed theoretically the two-dimensional magnetohydrodynamic (MHD) flow of Eyring–Powell nanofluid over an inclined plane. Jafarimoghaddam [5] investigated the MHD flow of Eyring–Powell fluid in the presence of Darcy–Forchheimer porous medium over the non-linear stretching surface. Kamran et al. [6] concluded that chemical reaction with the Newtonian heating impact is significant in the solidification process of liquid crystals and polymeric suspensions. Beneš et al. [7] investigated the time-dependent flow of an incompressible micropolar fluid through a pipe using asymptotic analysis. Some interesting results of the micropolar fluid are studied in these papers [8,9,10,11,12,13].
Nowadays, many problems in various fields of industrial and engineering need to be solved due to their important applications in daily life, such as controlling a motor’s temperature, machine speed, and constructing bridges and as well as other scientific usages. The model of the micropolar fluid may be utilized to construct the models of the dust or smoke particles in the gas or atmosphere. Unfortunately, these problems or models involve complex non-linear terms which are impossible to solve analytically. There are several methods employed to solve such problems. A well-known method is the shooting method. Lund et al. [14] studied numerically the characteristics of magnetohydrodynamic Casson fluid using shooting and Runge–Kutta numerical algorithms. It was found that the velocity decreases by increasing the Casson parameter in both solutions. Aurangzaib et al. [15] stated that the velocity drops in the first solution when the material parameter is increased, whereas the thickness of the momentum boundary layer increases in the second solution. However, the effects of material parameter are inversely proportional to fluid temperature. Lund et al. [16] extended the work of Aurangzaib et al. [15] for micropolar nanofluid and found three local similarity solutions using shooting method. Further, they also used another numerical method, three-stage Lobatto IIIA formula, to perform analysis of the stability of the solutions. MHD flow of nanofluid over the disk surface was solved by the shooting method [17]. The shooting method is a more appropriate method as compared to other methods to predict more than one solution. Some other interesting works of multiple solutions can be found in these articles [18,19,20,21,22,23].
Most engineering problems and phenomena of nature need analysis of MHD. It is a fact that the magnetic field exists everywhere in this world which implies that MHD characteristics exist under the availability of conducting fluids in natural phenomena. This phenomenon of MHD is significant in astronomy since most parts of the universe are occupied with spaced, charged particles infused by magnetic fields. Geophysics encounter MHD phenomena when dealing with the presence of conducting fluids and magnetic fields in and around the earth. Furthermore, MHD has great impacts on engineering due to its vital principles. These principles are also applied in numerous industrial applications such as MHD pumps, generators, nuclear reactors cooling, flow meters, heat exchangers, nuclear waste disposal, geothermal energy extractors, and space vehicle impulsion. The presence of a magnetic effect produces a Lorentz force generated by the magnetic field which usually repels the hydrodynamic field in the presence or absence of the permeable matrix. However, the opposite result is observed in the case of angular momentum [24]. Increasing the intensity of the magnetic field leads to greater Lorentz force and therefore skin friction increased [25]. On the other hand, Reddy et al. [26] noticed that the coefficient of skin friction declines with rising values of local Deborah number and magnetic parameter. Pal [27] reported that the impact of augmenting chemical reaction leads to a reduction in the skin friction coefficient at the wall, whereas the reverse behavior is noted by rising the permeability parameter of the porous medium.
To deal with the impact of viscous dissipation is very difficult due to its non-linearity behavior but it is also an important factor in heat transfer. Many researchers have tried to consider this in their studies [28,29,30,31,32]. Lund et al. [33] considered a viscous incompressible electrically-conducting Casson nanofluid over a shrinking sheet and found dual solutions. Further, it is noticed that viscous dissipation improves the flow and temperature of the nanofluid. Adegbie et al. [34] studied a two-dimensional boundary layer flow of micropolar fluid towards a stagnation point over a horizontal linearly stretching surface. Thus, the prime objectives of this study are as follows
To the best of our knowledge, no such model has been considered for multiple solutions. Therefore, these results are new and would provide a good understanding of micropolar fluid.

A two-dimensional, laminar boundary layer electrically-conducting incompressible micropolar fluid flow with viscous dissipation along an exponentially shrinking surface is considered. The u, v are velocity components corresponding the directions x and y, respectively. The x-axis is with the surface of the sheet while the y-axis is perpendicular to it. Physical model of the problem is shown in Figure 1. According to the above-mentioned assumptions, along with boundary layer approximations, the concerned boundary layer equations of motion along with angular momentum and heat transfer can be written as [15,35]:
Subject to these boundary conditions where is the similarity variable, is non-dimensional form of the stream function, and denotes the non-dimensional temperature whereas, prime stands for differentiation with respect to variable .
The following exponential form of the similarity transformations are used [15],
By using Equation (6) in order to transform Equations (1)–(4) in the system of non-dimensional ordinary differential equations, we have and boundary conditions will be as
Here, prime indicates differentiation due to , is the micropolar parameter (non-dimensional material parameter), we assume that γ is the given by where [15]. Further, is the magnetic field parameter, indicates Prandtl number, is the Eckert number, and S is the suction/injection parameter. The coefficient of skin friction, local couple stress, and Nusselt numbers is obtained in dimensionless form as where is the Reynolds number.

In this paper triple solutions were found. When there exists more than one solution, it is necessary to conduct the analysis of stability of solutions in order to indicate the stable solution. According to Usama et al. [36] and Lund et al. [37], the first step of performing stability analysis is to change the governing equations in unsteady flow form by introducing a new similarity variable, .
The new governing equations become where is the time. The similarity variables in Equation (6) with can be written as
By substituting Equation (15) into Equations (12)–(14), we get
Subject to boundary conditions
In order to indicate the solution stability of , , and which satisfies the equation of boundary value problem in Equations (16)–(19). For this purpose, we follow the suggestion of Rehman et al. [38] by introducing the following functions: where is the unknown eigenvalue which is needed to determine, , , and which are the small relatives of , , and respectively. Further, Equation (20) is submitted to Equations (16)–(19) by keeping , we get
Subject to boundary conditions
It is necessary to determine the initial growth of decay and the initial growth of disturbance of the values of the smallest eigenvalue. In order to find the initial growth of decay and disturbance of the eigenvalue, we have to relax one boundary condition as suggested by Haris et al. [39] and Lund et al. [40]. Physically, this relaxation in boundary condition provides the results of the smallest eigenvalue without loss of generality [41]. Mathematically, it is the step of the algorithm of the stability analysis. In this study, we relaxed the into .

MHD flow of micropolar fluid over an exponential shrinking surface was addressed. Hartmann number, viscous dissipation, and Joule heating have been accounted for. Multiple solutions and stability analysis were the main objectives of this study. The shooting method was implemented to get the solutions and the three-stage Lobatto IIIA formula, developed in bvp4c with the help of finite difference code, was used to determine the stability of the solutions. The main points of this study are as follows: 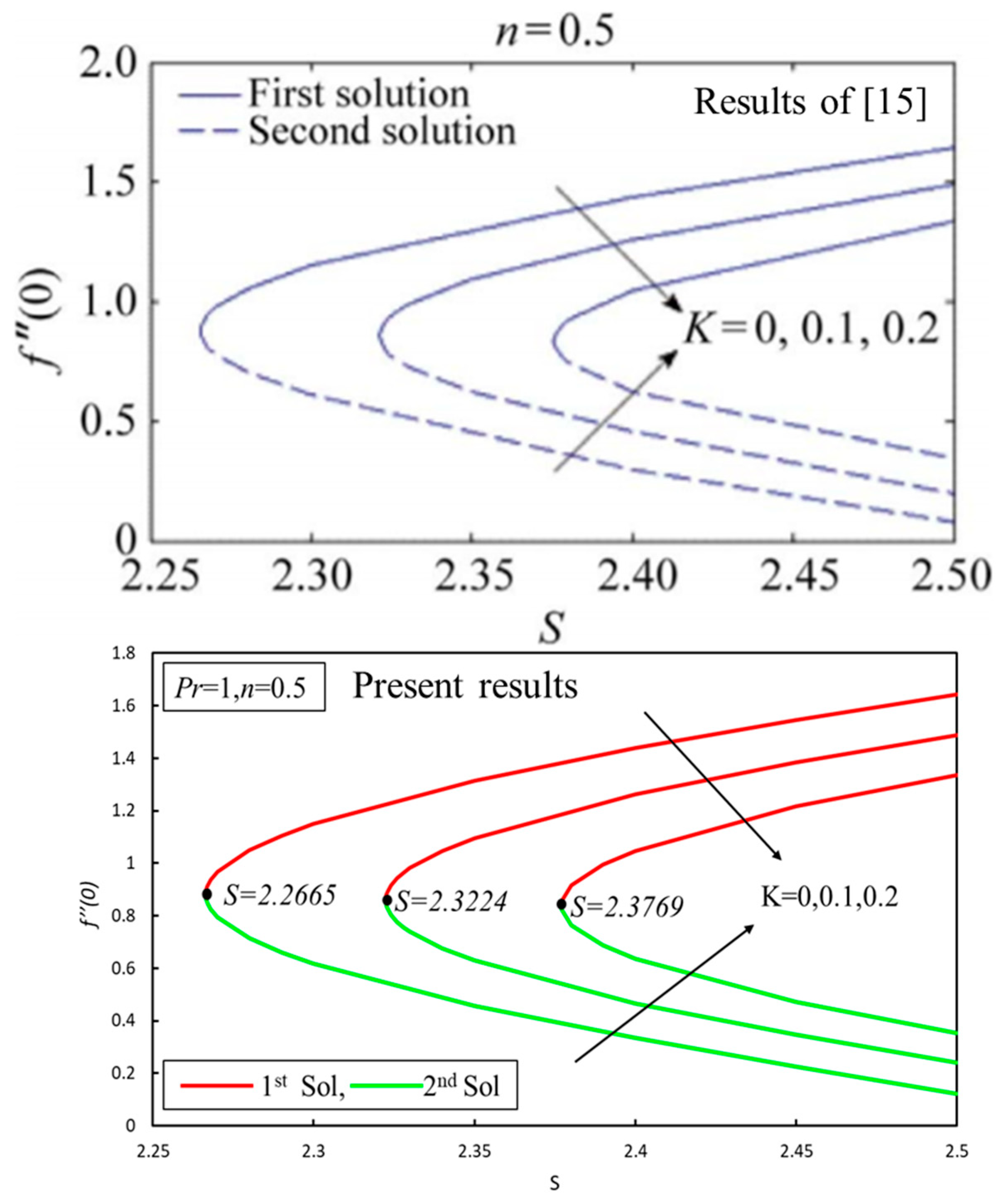 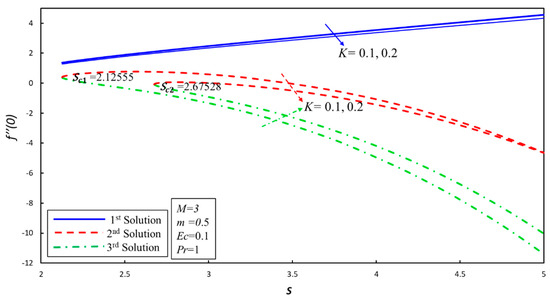 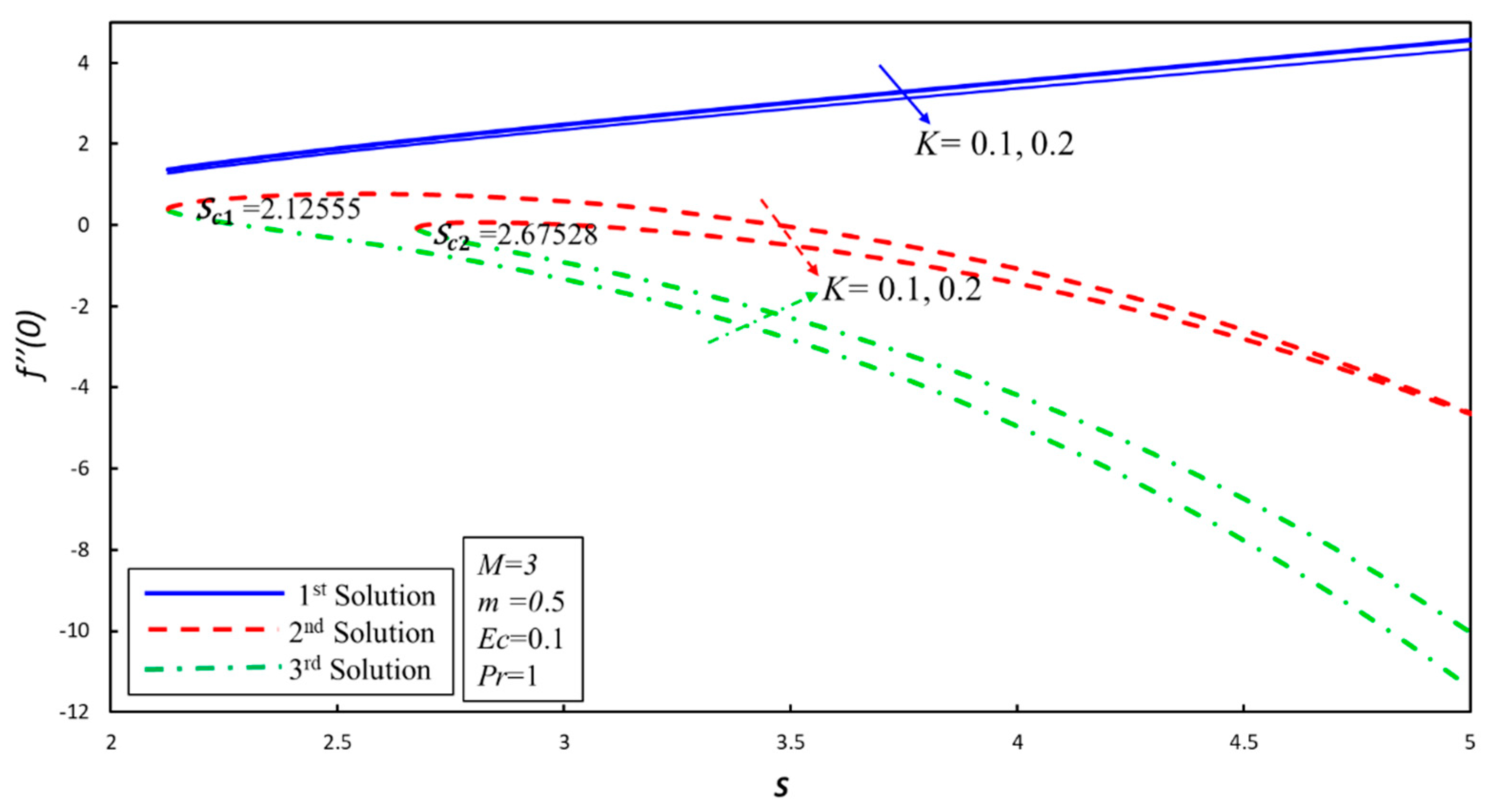 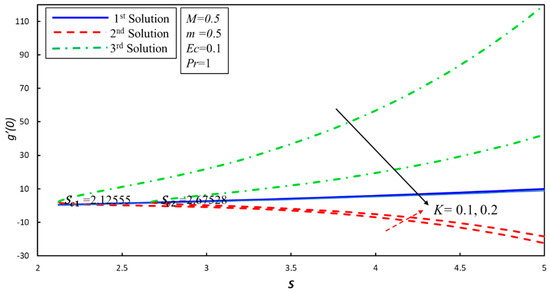 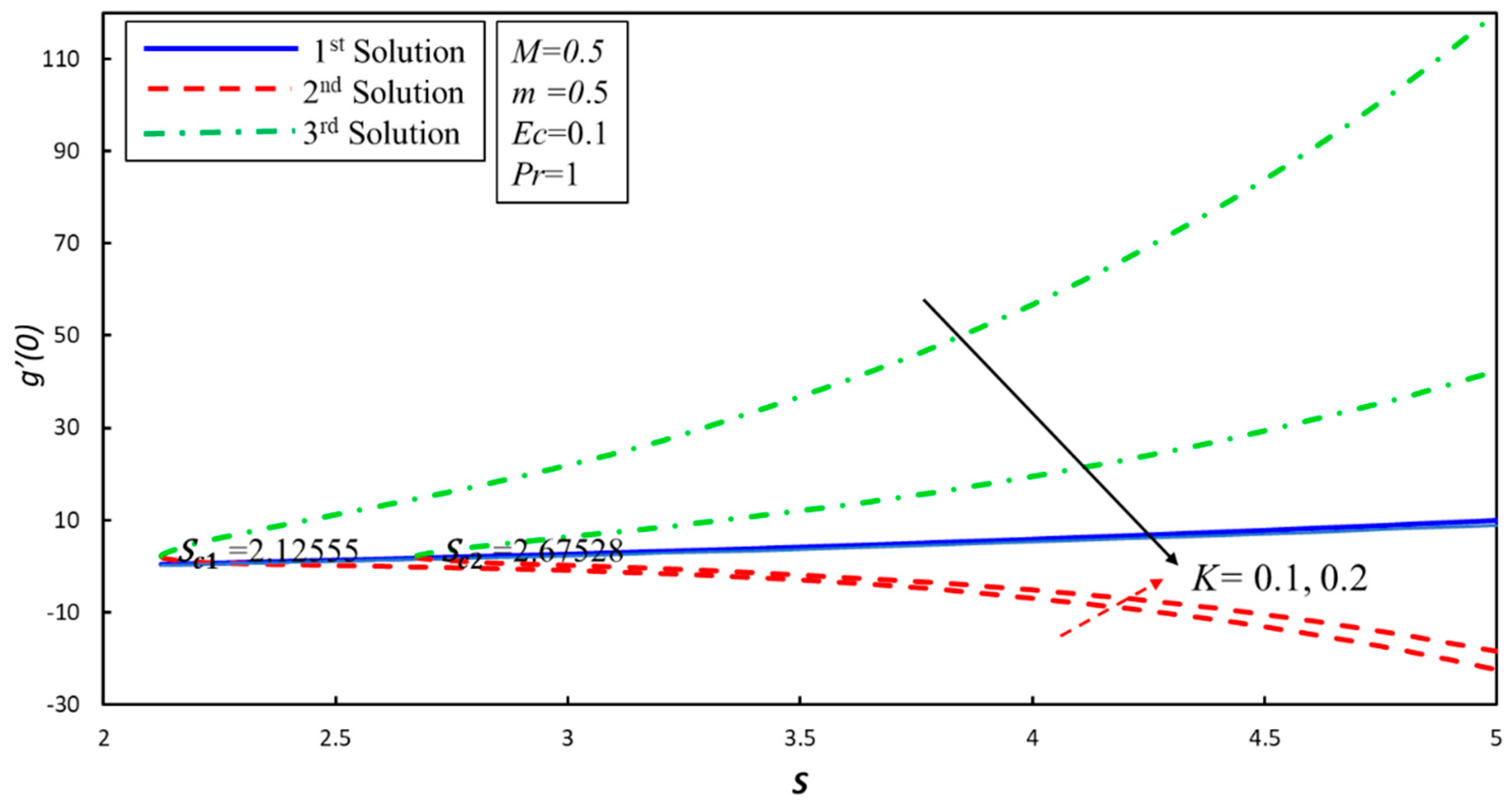 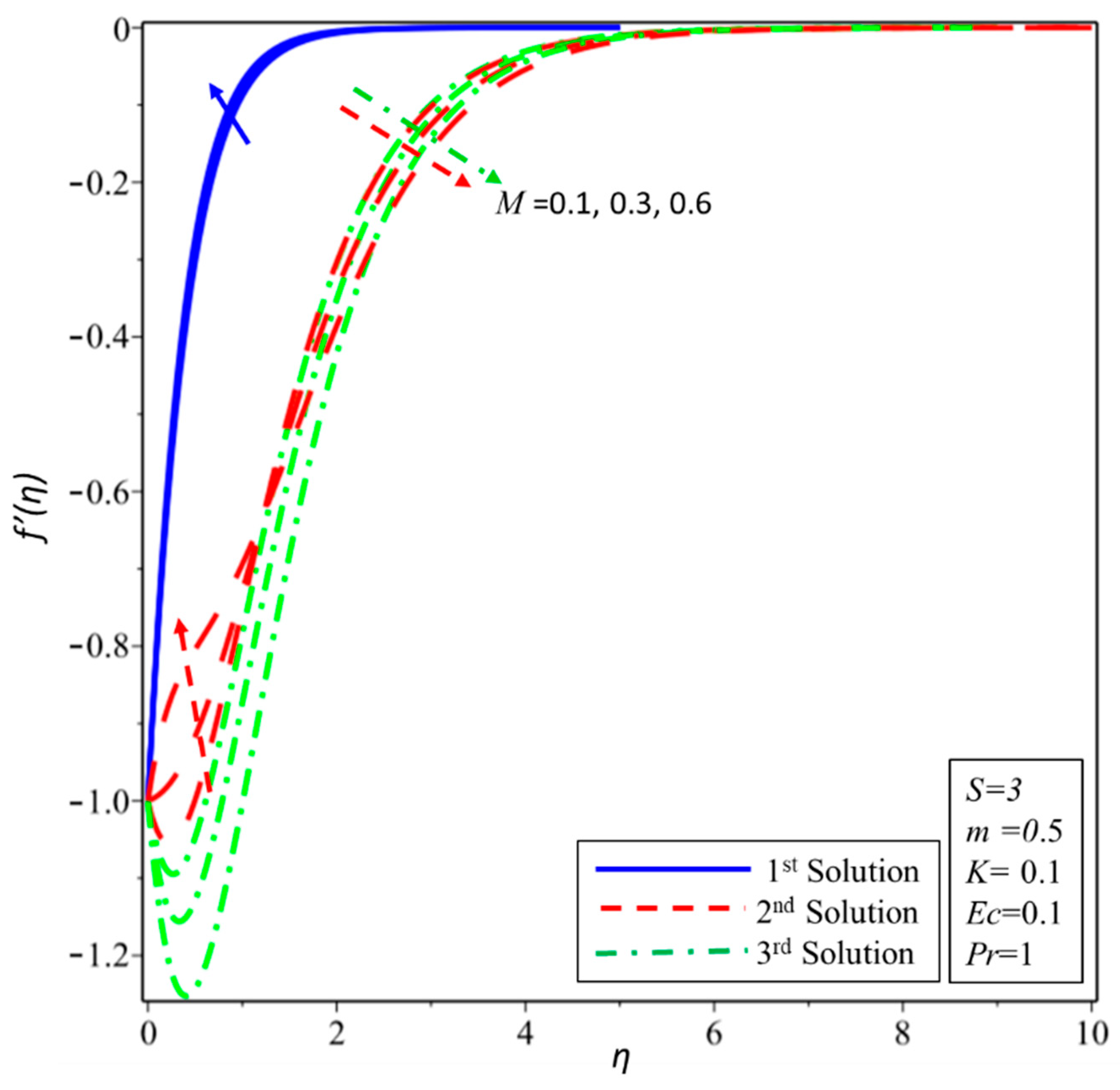 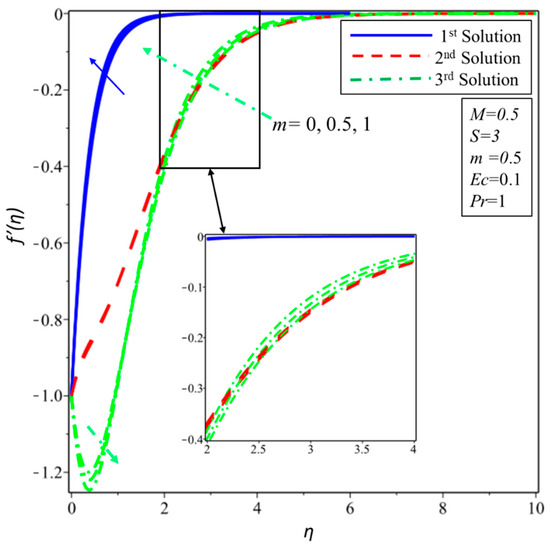 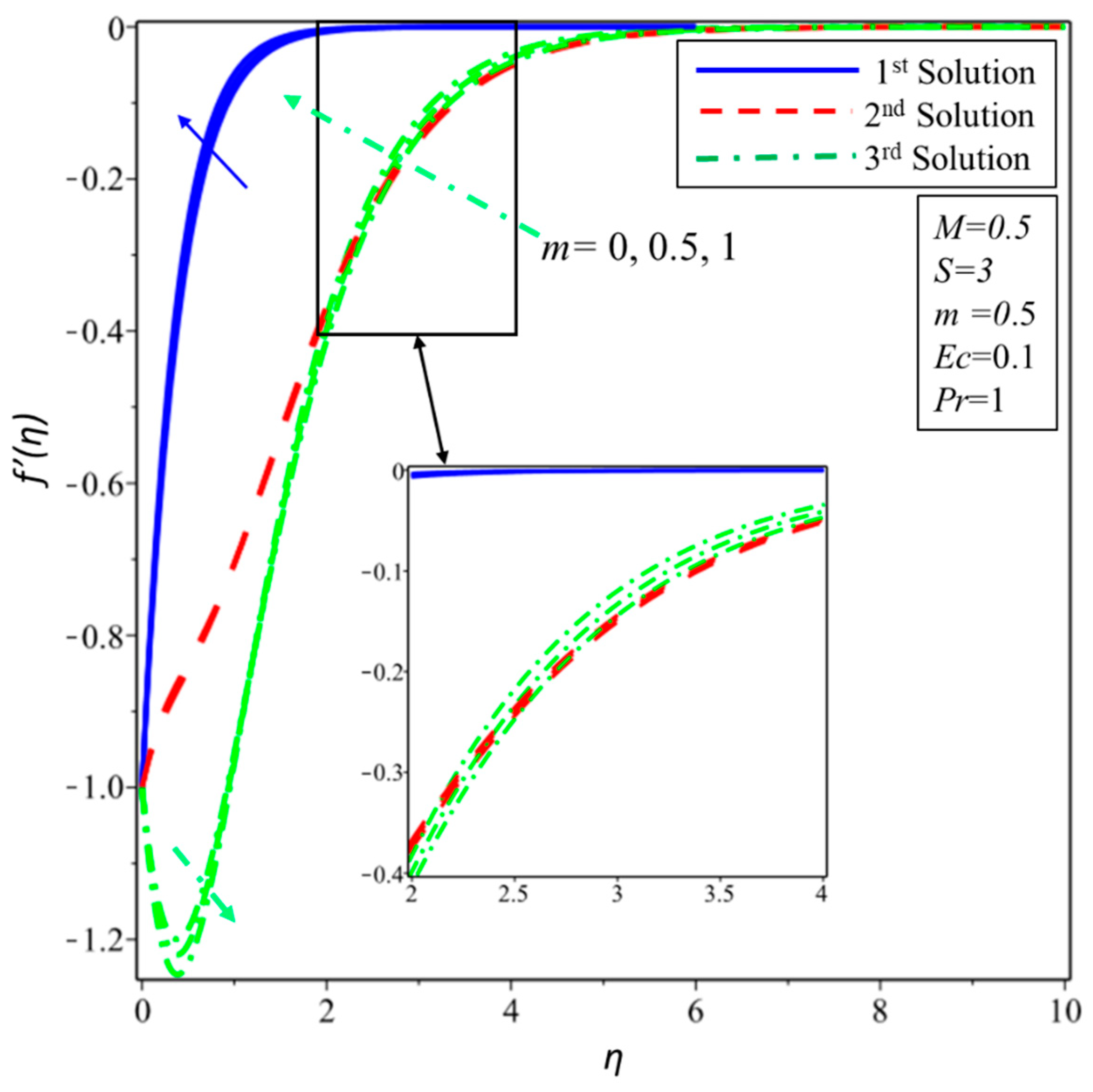 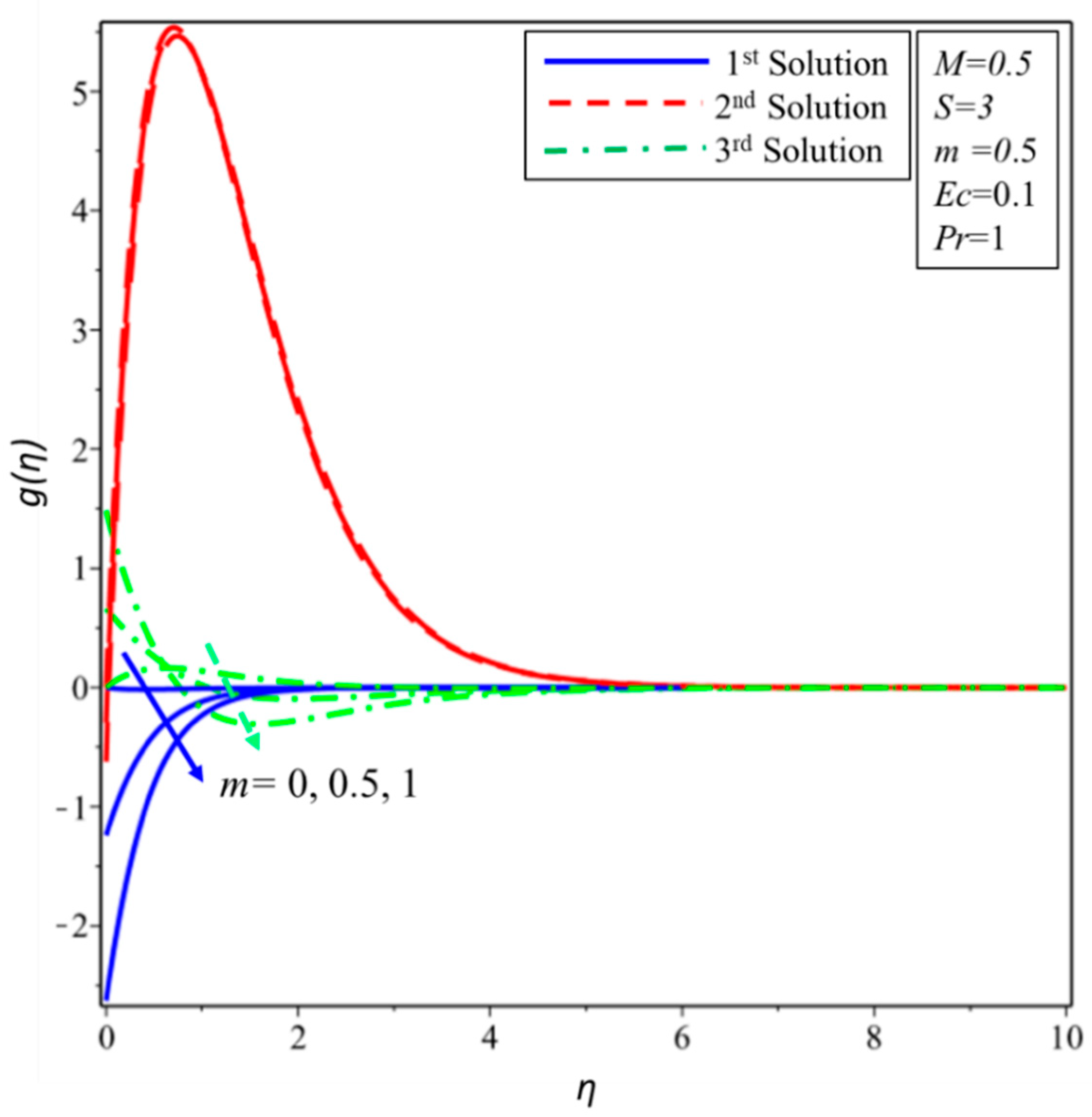 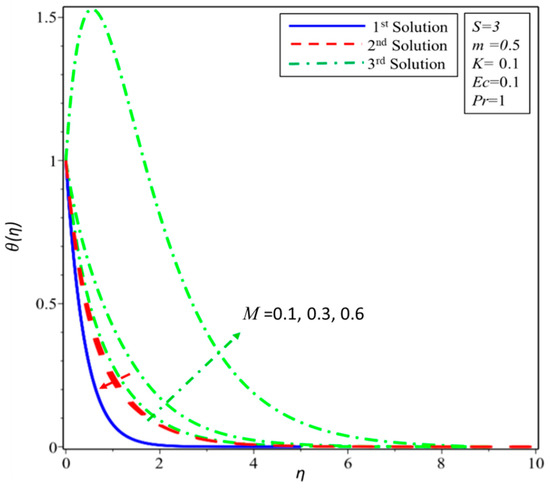 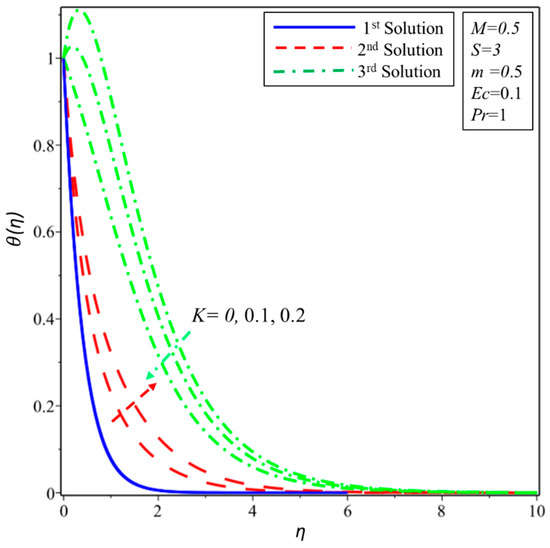 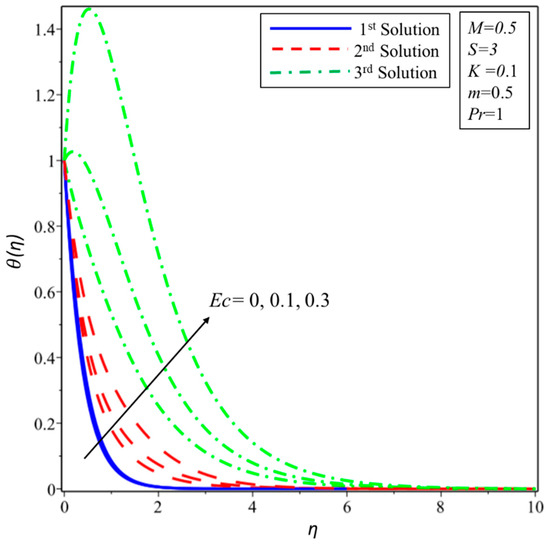 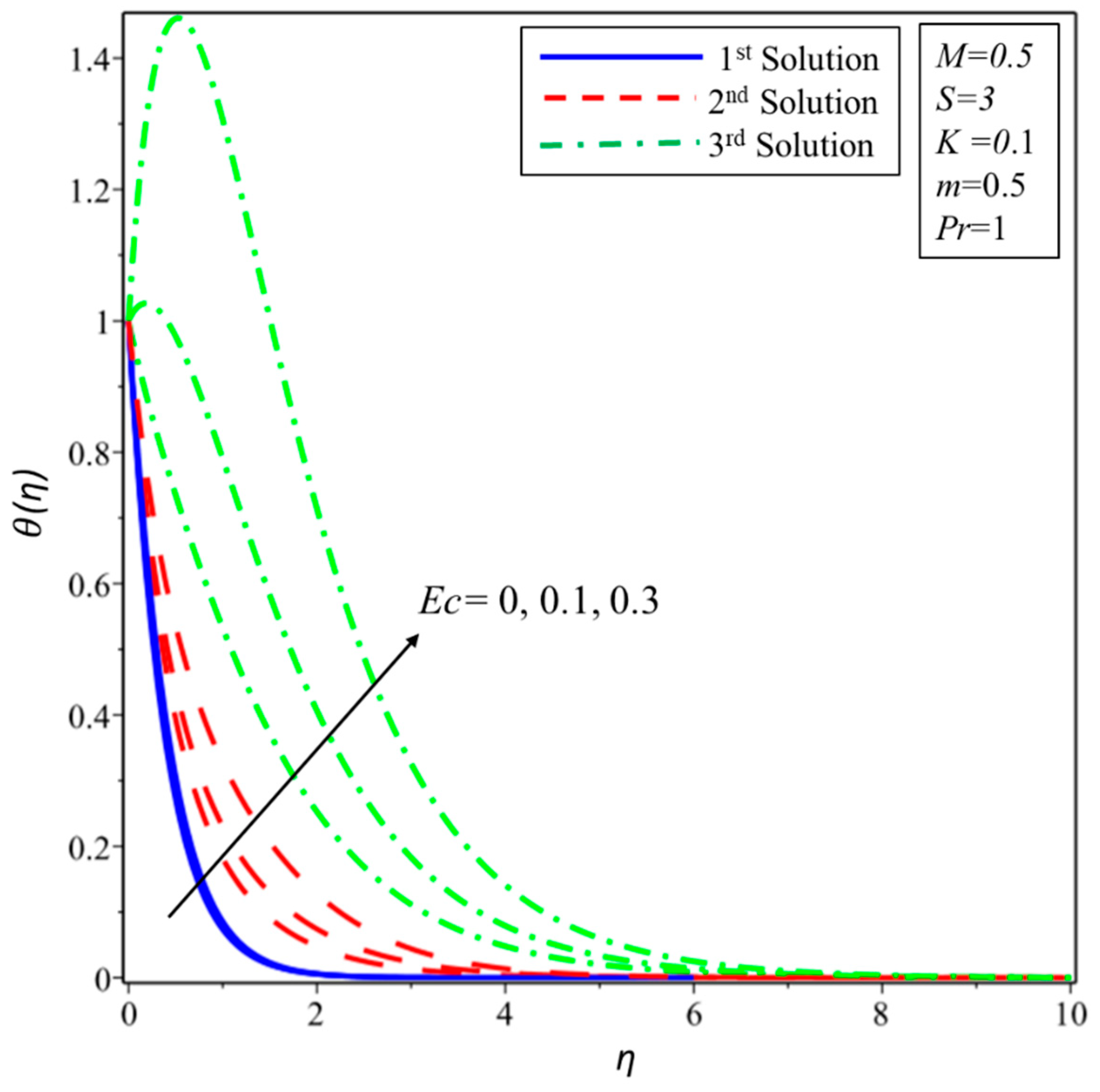 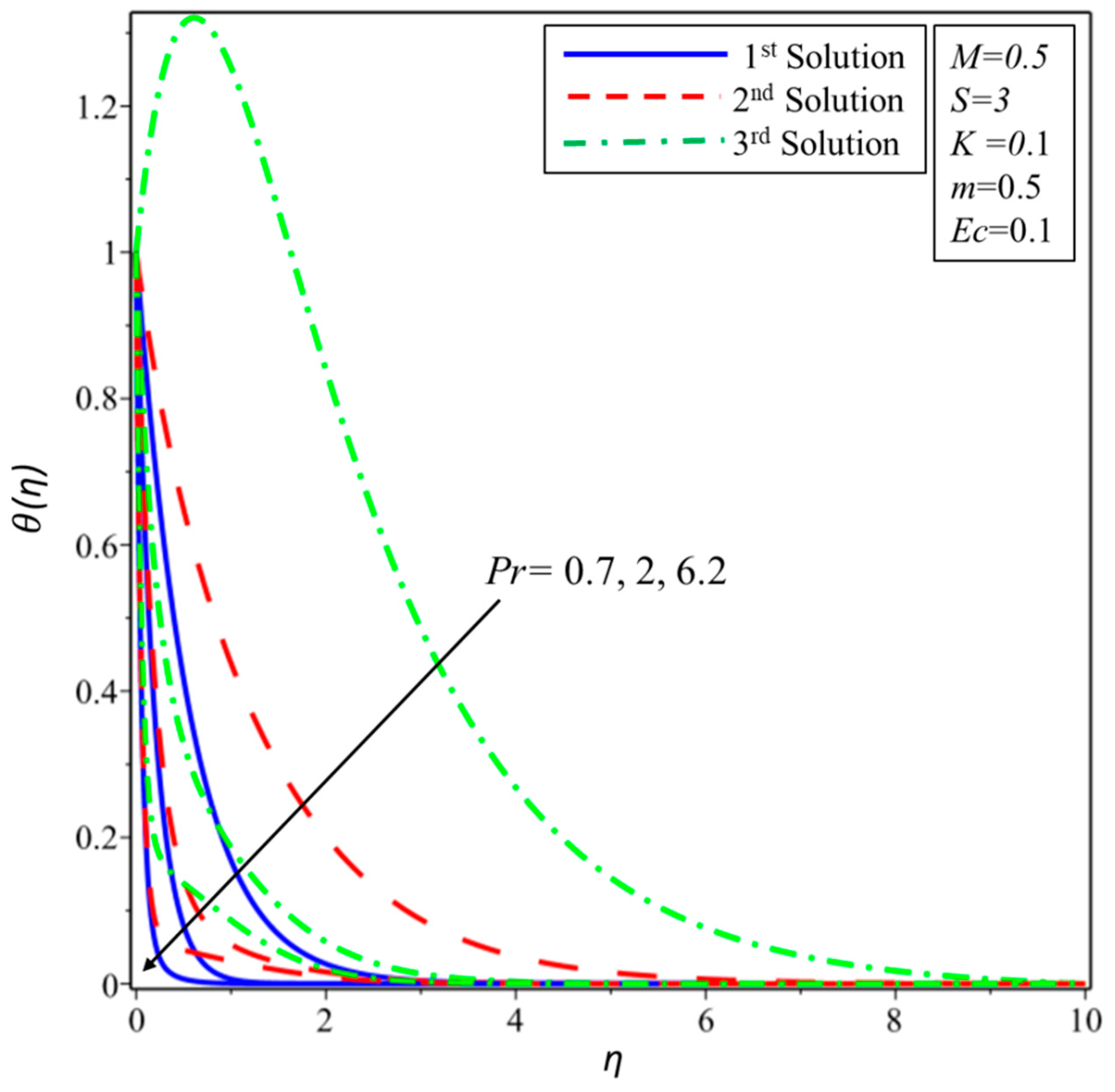