Currently, the trade volume between China and the European Union is experiencing rapid growth. However, there are many bottlenecks in the operation of the China Railway Express, such as imbalance in inbound and outbound transported containers in the Sino–European direction and a low profit margin. More than fifty-three rail routes in China provide rail transportation to European cities and have small traffic volumes. However, such a dramatic situation affects transportation costs, which are three times higher compared with maritime transportation, causing uncertainty related to the demand of Chinese customers. This study analyzes the shortcomings of previous research studies related to multicriteria decision-making (MCDM) models applied in the field of logistics and transportation. The study proposes a novel approach to determine the optimal locations of the CR Express international logistics centers. The proposed approach involves the application of a MCDM model using the DEMATEL-MAIRCA method. This technique finds the closest solution to the ideal one by identifying the value of the best alternative in line with the observed criterion, and by measuring the distances of other alternatives according to the observed criterion of the ideal value. Finally, we show the similarity of the proposed methodology to other MCMD methods, which is one of the key topics of the Symmetry Journal, to prove the validity of the applied DEMATEL-MAIRCA method. Preliminary results show that in view of increased container turnover between China and the European Union, the determination of optimal locations for CR Express international logistics centers should be carried out dynamically. View Full-Text
Keywords: facility location problem; criteria; multicriteria decision-making; DEMATEL-MAIRCA method; China Railway Express; international logistics centers facility location problem; criteria; multicriteria decision-making; DEMATEL-MAIRCA method; China Railway Express; international logistics centers
►▼ Show Figures 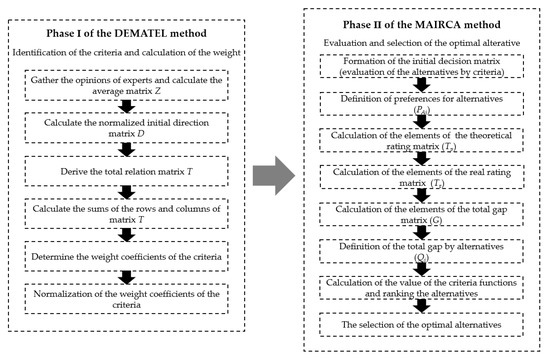