:
The effect of the application of machine learning on data streams is influenced by concept drift, drift deviation, and noise interference. This paper proposes a data stream anomaly detection algorithm combined with control chart and sliding window methods. This algorithm is named DCUSUM-DS (Double CUSUM Based on Data Stream), because it uses a dual mean value cumulative sum. The DCUSUM-DS algorithm based on nested sliding windows is proposed to satisfy the concept drift problem; it calculates the average value of the data within the window twice, extracts new features, and then calculates accumulated and controlled graphs to avoid misleading by interference points. The new algorithm is simulated using drilling engineering industrial data. Compared with automatic outlier detection for data streams (A-ODDS) and with sliding nest window chart anomaly detection based on data streams (SNWCAD-DS), the DCUSUM-DS can account for concept drift and shield a small amount of interference deviating from the overall data. Although the algorithm complexity increased from 0.1 second to 0.19 second, the classification accuracy receiver operating characteristic (ROC) increased from 0.89 to 0.95. This meets the needs of the oil drilling industry data stream with a sampling frequency of 1 Hz, and it improves the classification accuracy.
Keywords:
concept drift; machine learning; anomaly detection; nested sliding window; data stream

There are three kinds of window methods for the data stream: landmark [25], snapshot [26], and sliding window [2]. Due to its different working principle, the sliding window method is the most widely used.
As shown in Figure 3, the amount of data processed by the landmark model continues to increase gradually, so the algorithm only needs to respond to newly inserted data in a timely manner. The sliding window model has the same processing data range, which is always the current time data and similar fixed-length data. Therefore, when analyzing the sliding window data stream, new data should be continuously monitored, and old data should be deleted. In practical applications, the data in the most recent window from the current moment is often of great significance and research value and is usually the focus of the user’s attention. Therefore, sliding window data stream analysis method is the most widely studied and most practical method.

Accumulation and control map [27] calculates the difference between the current value and the mean value and accumulates these differences. The purpose is to detect the data change under the minimum delay. Based on the above analysis, we must determine the distribution of the analysis data. If there is a data stream sequence x before and after the distribution changes, then and are known. The CUSUM calculation process is as follows:
As shown in Figure 4, before the abnormal point, is always negative, so it is a linear downward trend; however, after the abnormal point appears, becomes positive and begins to show an upward trend.
As shown in Figure 4, CUSUM has a good anomaly detection effect for two simple and known distributions and can be sensitively detected for faint changes.
However, the future data distribution is unknown. Due to the randomness of the data stream, its distribution is also more complicated. Therefore, the CUSUM formula is changed to the following form: where is the mean value, is the standard deviation, is a tunable parameter of the algorithm, and operator = max (0; S). From the above formula, we can see that the modified formula no longer uses the average value of all data as a reference value, but instead changes the mean value to a certain threshold. This has the advantage of reflecting the current data change more sensitively. The algorithm steps are shown in Algorithm 1 as follows:
This algorithm can detect abnormal rise. The above algorithm shows that is the sum between the parameter and the reference value difference. It will be forced to 0 when the cumulative is always negative. When keeps rising and exceeds the set threshold , it will alarm and accumulate zero. We can see from the algorithm that the setting of threshold and reference value difference is very important. If and are overly small, more false positives and more false negatives will result.

This paper proposes the DCUSUM algorithm to determine the effect of interference data on the classification of industrial data streams. This algorithm is further processed on the basis of the SNWCAD-DS algorithm to improve the classification of the industrial data stream affected by interference data. The contributions of this work can be concluded as follows: (1) DCUSUM-DS can block misclassification problems caused by points that deviate from normal trends and can improve the problem of low detection efficiency caused by the classification of traditional data; (2) Compared with A-ODDS and SNWCAD-DS, DCUSUM-DS can improve detection accuracy; and (3) The computational complexity of DCUSUM-DS meets the practical needs of field engineering and meets all relevant engineering requirements.
In the future, research on each parameter in the algorithm, such as the length of the sliding window, needs to be carried out. Furthermore, the robustness and applicability of the algorithm need to be verified.

G.L. and C.Y. conceived of and designed the experiments; G.L. performed the experiments and analyzed the data; and J.W. and J.L. provided guidance and recommendations for this research. G.L. contributed to the contents and writing of this manuscript.

The National Natural Science Foundation of China (61473266 and 61673404), the Research Award Fund for Outstanding Young Teachers in Henan Provincial Institutions of Higher Education of China (2014GGJS-004), and the Program for Science & Technology Innovation Talents in Universities of Henan Province in China (16HASTIT041) for financial support. 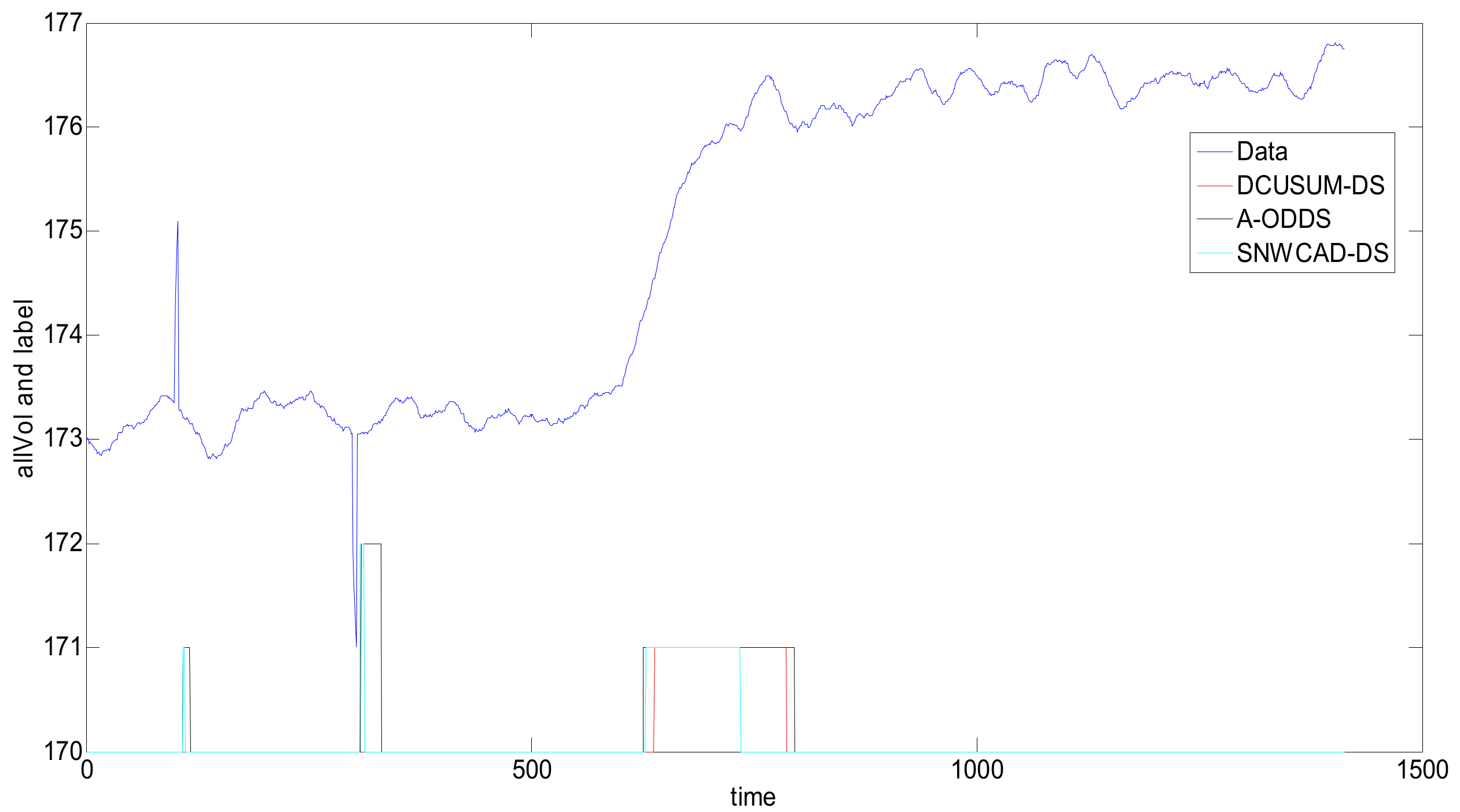 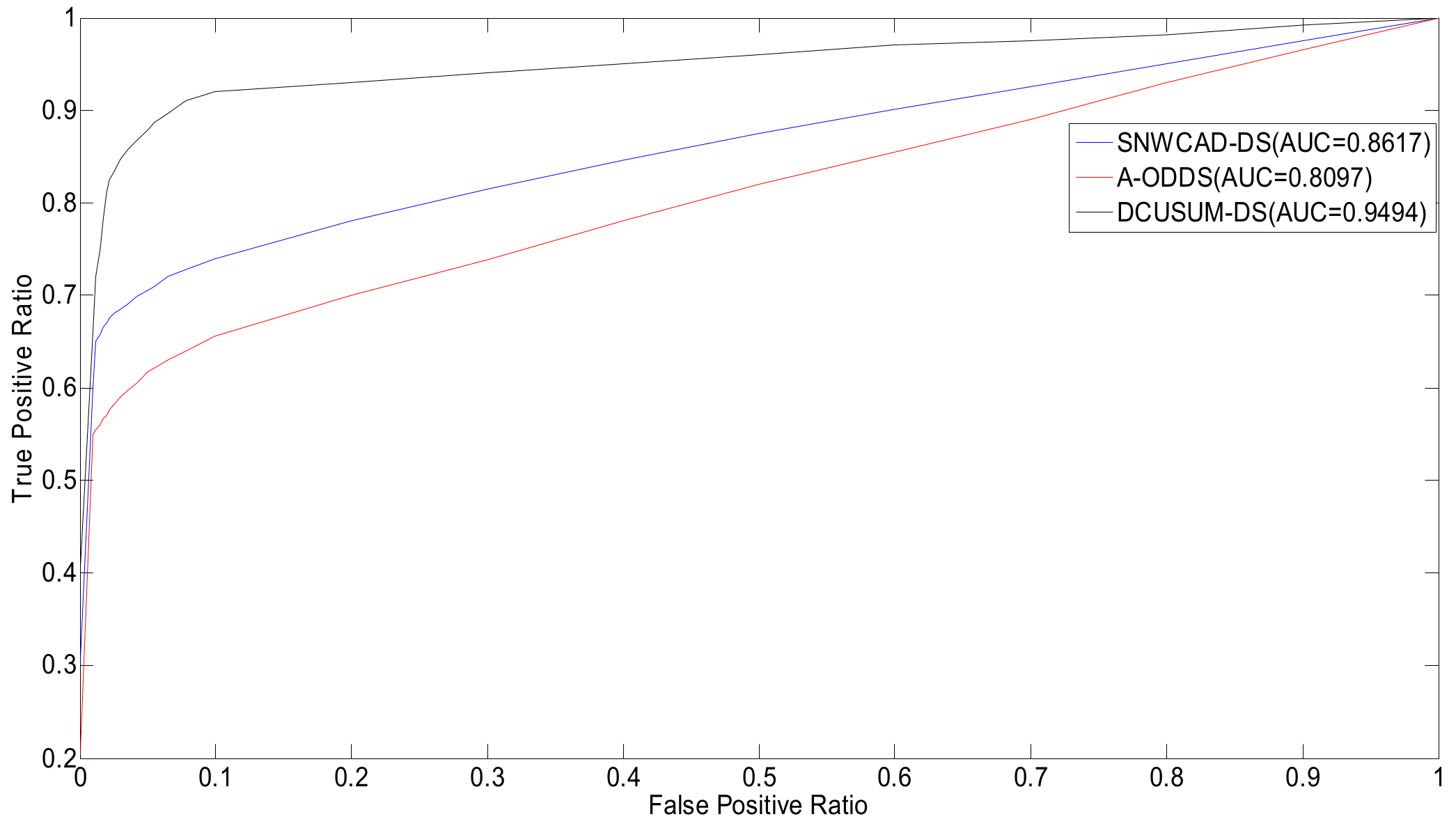