An ethnically homogeneous group of Yakuts (Mongoloid race, Northeast Asia), aged 18–31, was studied to characterize the diversity of particular features between left- and right-handed individuals. A total of 52 left-handed (32 women and 20 men) and 100 right-handed (50 women and 50 men) individuals were studied. Testing included two sets of questions and tasks, dynamometry of the right and left hand, and fingerprint analysis. Left-handed and right-handed people were found to differ in functional asymmetry of psychophysiological and motor reactions. Right-handers were characterized by higher intragroup similarity, while, among left-handers, greater dispersion of these traits was observed. Asymmetry in hand grip strength was less pronounced in the left-handed people than in the right-handed; this difference was statistically significant, and the difference was greater in men than in women. This suggests that the non-dominant hand in the left-handed people was subjected to a greater load and indicates the forced adaptation of the left-handed people to “dextrastress”. No significant difference between sexes was found when analyzing fingerprint patterns. Left-handers had arches significantly more often than right-handers. Radial loops were most often found on the index finger, and, in the left-handers, their occurrence was significantly higher on three to five fingers of the left hand compared with the right-handers. The levels of fluctuating asymmetry in left-handers and right-handers were similar. View Full-Text
Keywords: anthropology; handedness; dermatoglyphics; fingerprints; functional asymmetry; fluctuating asymmetry anthropology; handedness; dermatoglyphics; fingerprints; functional asymmetry; fluctuating asymmetry
►▼ Show Figures 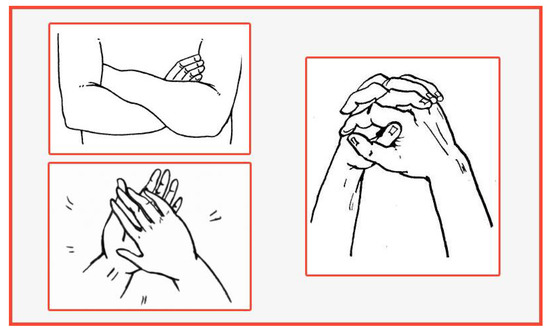