Evaluating Vulnerability of Central Asian Water Resources under Uncertain Climate and Development Conditions: The Case of the Ili-Balkhash Basin

Ancient WEF: Water–Energy–Food Nexus in the Distant Past

The concept of water–energy–food (WEF) nexus is gaining favor as a means to highlight the functions of the three individual nexus elements as interrelated components of a single complex system. In practice, the nexus approach projects forward from the present, seeking to maximize future WEF synergies and avoid undesirable tradeoffs. A complementary approach was employed here to gain insights into how the ancients dealt with WEF relationships, whether currently relevant nexus principles were practiced long ago, and how past WEF dynamics compare to those of today. Two examples, both dating to before the common era (BCE), are considered in detail. The qanats of ancient Persia brought groundwater to the surface and directed it to clusters of agricultural fields in arid areas where crop production was not otherwise feasible. In contrast, the Dujiangyan irrigation scheme of ancient China harnessed previously destructive surface water flows to stabilize food production across a vast agricultural plain. Designed and constructed under highly uncertain conditions and with a long-term perspective, both relied on local resources and expertise to exploit the tight coupling of water and the intrinsic energy from its flows to produce food. Ingenious infrastructure combined with sound governance allowed both to achieve remarkable synergies among the WEF components with minimal apparent tradeoffs. Although both are now challenged by climate change and the increasing complexity of modern WEF relationships, qanat systems and the Dujiangyan irrigation scheme have survived for millennia and still exist in recognizable form. This is due in large part to the persistence of governance systems that devolved significant decision-making authority to those who used water and energy for food production. Although it is not feasible to roll back technology to that of an earlier time, the successful attributes of earlier WEF governance systems warrant more attention in the future. View Full-Text
Keywords: water–energy–food; WEF nexus; Dujiangyan; qanats; irrigation; China; Persia; water governance water–energy–food; WEF nexus; Dujiangyan; qanats; irrigation; China; Persia; water governance
►▼ Show Figures 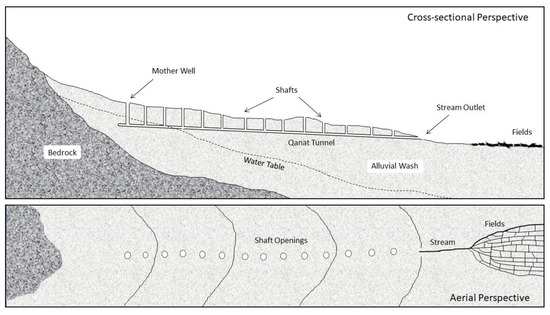