Hydrochemical Characteristics and Quality Assessment of Shallow Groundwater in the Xinzhou Basin, Shanxi, North China
Next Article in Special Issue

In North Dakota, agriculture contributes a large sector of the state’s economy, but vegetable production is limited due to the state’s climate condition. Inadequate soil moisture and low soil temperature are the two major factors prohibiting quality produce and high-yield vegetable production. In this study, a soil-water potential, sensor-based drip irrigation system was developed, designed, and installed to evaluate its application on tomato and watermelon productions in a two-year field experiment in 2019 and 2020. The experimental treatments were drip irrigation and no irrigation under three mulches: black plastic, clear plastic, and landscape fabric mulches. Irrigation was scheduled at 8:00 am for watermelon and 9:00 a.m. for tomato, with the ability for each irrigation event to be bypassed based on the soil moisture conditions. Due to rainfall differences in the two years, irrigation was barely needed in 2019, but in 2020, drip irrigation was applied frequently. On average, for the two-years’ field experiment, the highest yield for tomatoes was obtained from drip irrigation under black plastic drip irrigation treatment with 40.24 Mg ha−1 in 2020, whereas the highest yield for watermelon was from drip irrigation under clear plastic mulch with 165.55 Mg ha−1 in 2020. The effect of mulch, irrigation, and combined practices were analyzed based on the average fruit weight and diameter, electrical conductivity (EC), pH, and sugar content of the samples. The results showed that for watermelon, the average weight and diameter were significantly heavier and higher with irrigation treatments, but the EC and the pH values were significantly higher with mulch treatments. For tomatoes, the average weight, diameter, pH, and sugar content were all significantly higher with mulch treatment, but the EC was higher with irrigation treatment. View Full-Text
Keywords: mulch; automatic; drip irrigation; soil moisture sensor; tomato; watermelon mulch; automatic; drip irrigation; soil moisture sensor; tomato; watermelon
►▼ Show Figures 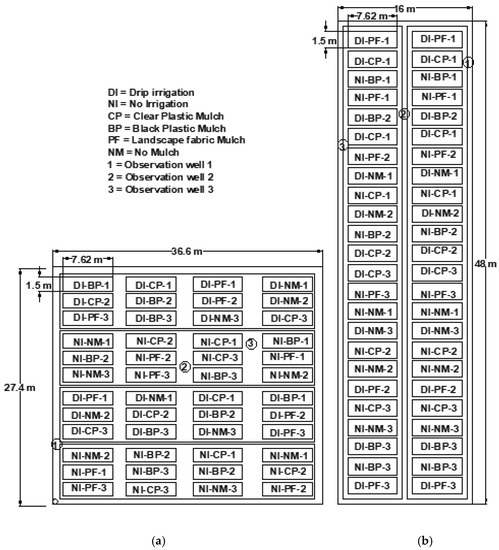